Hi all
I’m a complete newbie in soap making. Had prepared myself for a batch of Castile soap in the cold proces. After mixing oils and lye i discovered my supplier had sent potassium hydroxide instead of Sodium hydroxide. It was my daughter who pointer this out when my mixture did not go in trace, only run custard.
I used 200gr coconut oil 76degree, 800 gr olive oil, and according soapcalc: 380 gr water and used (i thought)140gram of sodium hydroxide which turned out to be Potassium hydroxide.
I mixed oils and lye at 43C/110F.
After discovering having the wrong lye i did leave my mix in the double boiler for about an hour and the temperature went up to about 60C/140F. The mixture did separate so I took the stick blender and manages to get it into a sticky paste.
After wards I did put it in the airing cupboard for about 24 hours now at a temp of more or less 30C/86F
This soap was meant for for personal use as well insecticidal soap to kill aphid and other little bugs in my fruit trees.
My questions are?
Is this soft sticky usable in a rebatch.
The stuff smell like grandmothers soft soap called groene/green zeep/soap
is there any thing i can do with it.
suggestions for a book to help me out.
As a newbie I thought to start with CP soap and now i landed in a liquid soap making process.
I see if can attach two pics. with the result
Thanks for your attention and help 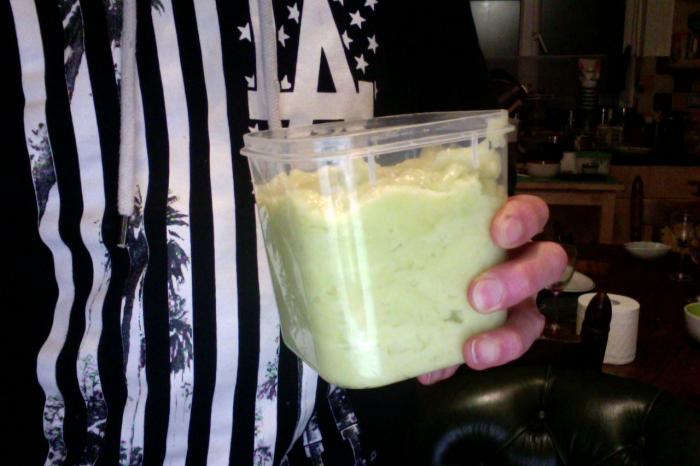 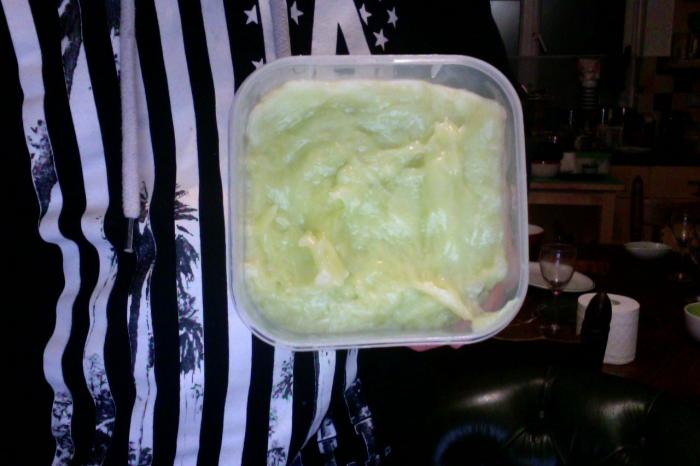 Your soap needs more KOH by weight to make a proper soap. Right now it has too much fat in it to be usable.

Do you know the purity of the KOH that you are using? That is important to know first.

Never heard of Potassium hydroxide but wiki says this...

Potassium hydroxide is an inorganic compound with the formula KOH, and is commonly called caustic potash.

Along with sodium hydroxide (NaOH), this colorless solid is a prototypical strong base. It has many industrial and niche applications; most applications exploit its reactivity toward acids and its corrosive nature. An estimated 700,000 to 800,000 tonnes were produced in 2005. Approximately 100 times more NaOH than KOH is produced annually.[9] KOH is noteworthy as the precursor to most soft and liquid soaps as well as numerous potassium-containing chemicals.

As for the soap you made the best place for that is in the bin.

Get a refund and order the proper stuff and start again!

Potassium Hydroxide is used for liquid soap. You, could figure out how much additional KOH required to make it into a usable soap batter. I wonder DeeAnna if she could dilute this down for using as an outside spray. Just thinking...

You would need 214.7 grams in total of the potassium hydroxide to saponify those oils at 5% SF. That would be to make a liquid soap paste, not a hard bar of soap.

I have been trying to make groene zeep for a while now. Does it really smell like the real groene zeep?? I understand that groene zeep used to be made from hemp oil.

There is so much extra fat in the current "soap" that I don't think it would work well for any typical purpose, although I can't say for sure about the insecticidal soap use. The conversion from NaOH to KOH is this:

So Zeepmaker's soap has only about 70% of the lye needed to saponify the fats. That's a rough number, but no matter -- that is a LOT of superfat.

Edit: This can make a lovely liquid soap, by the way. It can easily be fixed by saponifying the extra fat with more KOH and water. It will be good to know the KOH purity to calculate a more accurate answer.
Last edited: Feb 21, 2016

You can't know the KOH purity without testing it, but the product we buy from reputable suppliers has about 10% residual moisture so we calculate based on 90% purity.
K

Think of your first batch as homemade bread with bad yeast. Don't get discouraged and just think of the mother/daughter story you just created. The one about a funny mistake and not giving up!!!
Z 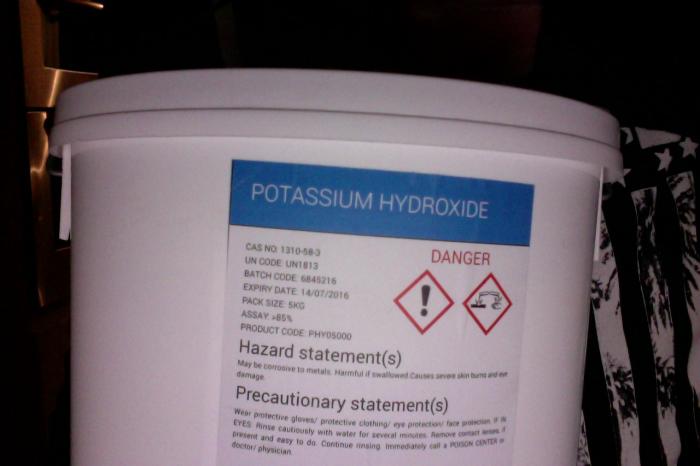 Zeepmaker said:
Thanks for the quick replies.
see a pict of the KOH tub. I guess it is 85% pure????
Quote " KOH weight = NaOH weight X 1.403" would i need KOH weight = NaOH weight X 1.403 :85*100
Yes it definitely smells like soft groene zeep as sold in Holland. But i serious doubt if they realy use hemp oil as it was not very wide spread grown in Holland or the EU. (but maybe i'm wrong) over the last decades.
Click to expand...

Yes it's 85-90% pure, most of the impurity being water. You can't really get better than 90% purity, give or take a few points. You must keep it tightly closed because it absorbs moisture very quickly.

Yes, that's basically it, but just to be thorough, I ran this through my personal soap recipe calc to double check the numbers. To summarize the actual recipe you made:

I set up a new recipe with the same weights of coconut oil and olive. I chose 3% superfat and 25% lye concentration -- these are typical settings for a liquid soap. This new recipe:

Mix the additional KOH and water together until the KOH is dissolved. Gently stir the lye solution into your soap paste until everything is well mixed. It will probably heat up. If I was making this soap, I would cover the soap well once it is well mixed, put it in a safe place out of reach of pets and children, and let it saponify overnight or longer. Carefully check for zap ( http://www.soapmakingforum.com/showthread.php?t=30690 ). If it is zap free, the soap paste is done.

You can either store the soap as this thick paste or dilute part or all of it with distilled water. To dilute, follow the instructions in either of these tutorials:

Others may have suggestions or corrections that may be helpful.
Last edited: Feb 21, 2016

Can I just add for your future soaping adventures that Castile Soap is 100% Olive oil of the oil used. No added coconut oil.

What you were trying to make is sometimes called Bastile Soap.

DeeAnna, I don't know how you have time to do your own soap making. You are a gem. I notice every time someone has a soapy mishap, you find a way to save the day. :angel: It makes my heart happy that there are people like you that are so wonderfully giving.
S

This should make lovely liquid soap once it is properly saponified. You did well for not panicking and throwing it away!

Gini said:
DeeAnna, I don't know how you have time to do your own soap making. You are a gem. I notice every time someone has a soapy mishap, you find a way to save the day. :angel: It makes my heart happy that there are people like you that are so wonderfully giving.
Click to expand...

Never underestimate a soap maker with an engineering degree and a slide rule.:mrgreen:
She does save the day AND is a very good teacher. Learn at your own pace.

Steve85569 said:
Never underestimate a soap maker with an engineering degree and a slide rule.:mrgreen:
She does save the day AND is a very good teacher. Learn at your own pace.
Click to expand...

Thanks, all! I appreciate the support. I don't always take the right tack with some people and that gets me in trouble sometimes, but I'm glad I can help most people most of the time. It's an outlet for the frustrated teacher in me.

Susie -- would you agree with the basic method I suggested of blending in the lye solution and letting it saponify at room temp? I was thinking the soap that has already been made at this point would emulsify the lye solution and the unsaponified fat. I was hoping you would give your opinion.

Zeepmaker -- I hope you are willing to try this -- I hope we haven't scared you off!

And BWsoaps -- I challenge you to give liquid soap a try too. :mrgreen:

Steve -- I took the very last slide rule methods class they ever taught at Iowa State University. I still have that honkin' big Versalog somewhere, but I doubt I could use it anymore. I remember all the guy engineering students wearing their slide rules in long leather cases swinging from their belts. A kind of badge of engineering nerd-dom.
Last edited: Feb 21, 2016

DeeAnna,
I had a prof that could beat us in statics and dynamics with his SlideRule :shock:. We had scientific calculators. It was never in question who was teaching whom.:Kitten Love:
S

I absolutely would mix the KOH/water with the paste. I might do it with some heat so as to speed things up a bit, but that is my impatience talking. I was wondering what superfat you figured that at, but was too sleepy to figure it out just then.

ETA- And apparently too sleepy to read it properly, as you state it in there.

Yes, that is how much KOH and water to use. That method is what I would if I could get that paste to take it without heat. If I did not add it with heat, I might wait a few days to zap test just in case.

I will repeat myself, though. This will make some lovely hand washing soap or paste. I would not use it for laundry, dishes, or aphids as it does have some superfat that you don't want on clothes, dishes, or plants.

Thanks, Susie! I can see your point about adding some heat to get the saponification going again a little quicker.