Been searching the threads and Google for some answers, but didn't quite find was I was looking for.

I am not new to CP soap making, but I decided to give HP soap a try. I did a spin on bastille soap but added an exotic butter: Ucuuba. I've never had any issues with CP soap. My recipe (using 2.5lb of oils total) from SoapCalc:

I mixed lye at about 114F and oils were at about 140F. I read in a few places that temps are not too important when mixing lye and oils in HP, but I am aware of Ucuuba's high melting point (127F). It traced very, very quickly, but kind of resembled a false trace with a little oil not mixing in. I continued blending with immersion blender until a heavy trace was reached. I think...? It was extremely smooth/creamy like thick pudding, but it seemed like the edges may have started hardening just slightly. I then realized my crockpot had was off and wasn't set on low. Turned it on. Soon the edges bubbled and it looked like it was on the right path. I put plastic wrap over my crockpot before placing lid on.

I watched a lot of videos on the different stages of HP, but after 45 minutes, it looked like it stayed in the oil separating/gelling at the edges stage. I decided to give it a stir at one hour noticing little change to the look of the soap (several people recommended not stirring). As I stirred, it immediately turned to what I imagine the vaseline stage to look like. I did a zap test for the first time; didn't notice any zap or strange feeling, but the soap tasted king of salty...? The sides had hardened a bit as I scraped around. As I stirred in my bentonite clay slush (which didn't stir well into it at all), I noticed small and a few larger, lighter colored chunks (one was probably 2-3 inches by 1 inch) in the soap. I also tested the temp with a meat thermometer at the end and it was almost at 195F, but I'm not sure how accurate my thermometer is. In somewhat of a panic, I just threw it into the mold hoping for the best. Should I have let it keep cooking until 200-220 degrees F? I thought I wouldn't have issues with Ucuubu butter and that it wouldn't solidify in a crock pot.

Any idea why it would chunk like that? Lye water/Oil temperature differences? Did the Ucuuba Butter throw it off? Should I be concerned about the chunks? Undercooking? Overcooking? Too much water loss? Lye issues?

I will post an update tomorrow with pictures after I un-mold it.

Thank you for reading my long, detailed post! The top picture is last seconds of cook and the bottom is the heavy trace part. 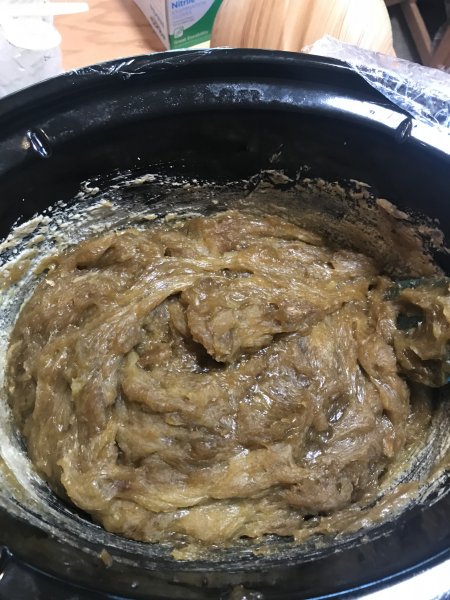 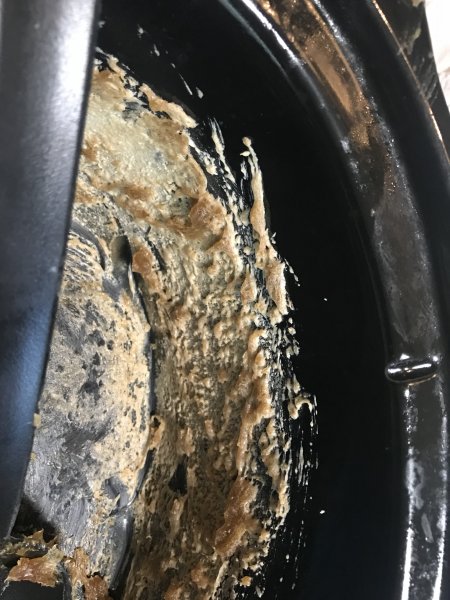 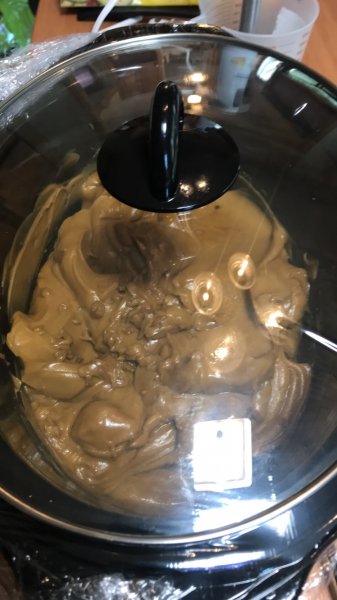 It looks like it over cooked and dried out around the edges. Did you scrape the sides? That’s likely what it was. The liquid evaporated too much.

I scraped a little bit, but the larger chunks looked like pure chunks of ucuubu butter, but it could have been an over-cooked chunk. I am going to return the slow cooker because the lid wasn't fitting right. Even with the plastic wrap maybe too much water got out! Darn.

Is it still okay to use if it doesn't crumble on me?

Putting it back in the crock won't help, even with a tight fitting lid it will just dry out more but I suppose you could always add a bit more water. Those dried out chunks won't remelt though, you are better off just leaving it be at this point.

There is no way the chunks are the butter, its just dried bits. It a common occurrence when learning how to HP. So many people worry about stages and cooking long enough that they over cook. I can do a basic HP batch in about 30 minutes.

Its perfectly safe to use as long as it doesn't zap, the chunks are just cosmetic. You don't have to wait until tomorrow to unmold. HP can be unmolded and cut as soon as its cooled down.

Thank you! I wasn't thinking about rebatching it in a new pot. Just going to get a new one for the next batch I make. Thanks again!

Ah, I see. Crock pots don't have very tight fitting lids so it might just be the way yours is designed. I'd try again but keep your crock on low. Don't worry about reaching a certain temp or stages, cook it until it looks like gel then mold it up. Even if its not all the way cooked, it will finish saponifying in the mold. Better to undercook then overcook imo.

Location
Somewhere Over The Rainbow

Just adding my 2 cents, because it happened to me!

I'm a VERY thrifty soap maker so, even though I was advised against scraping the sides when doing an HP batch, I did it anyway. It didn't hurt anything but now my soaps look like they have pieces of fruit in them! So funny, because I made it with ripe mango puree.

So you know, it doesn't hurt anything, your final bars just look mottled. But if you don't mind the rustic look, keep scraping those sides! And yes, by the time you get a lot of that dry-looking stuff on the sides of your crockpot, you've overcooked your soap. I'm learning too! 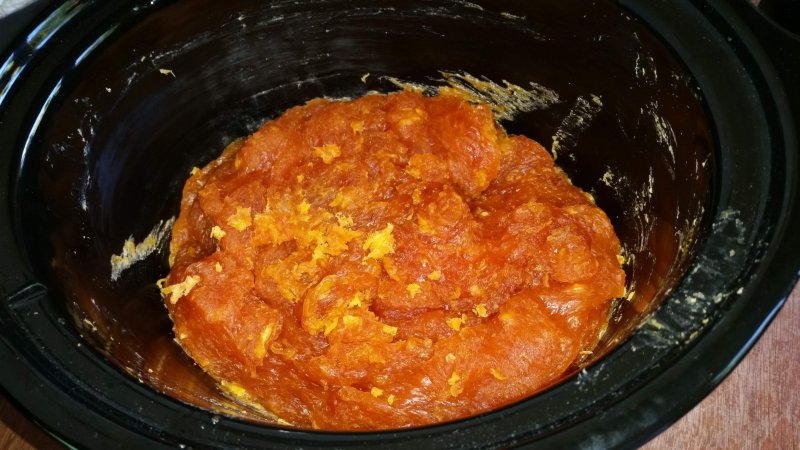 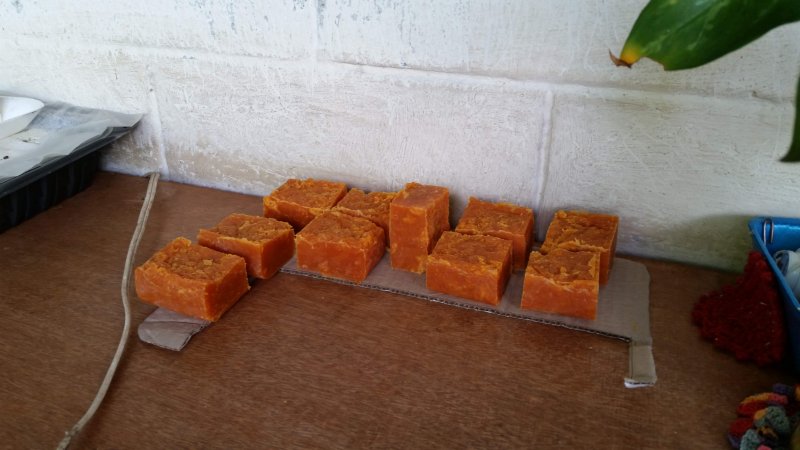 I agree - it's probably overcooked bits. They make me think of parrafin wax in look and texture - do your bits look like that?

I am a side scraper! What works for me - I soap my HP with a bit more water - 40% instead of 38% in the "water as % of oils" box. I cook mine on low for about 30-45 minutes (depends on how impatient I am). I give it a good stir about every 10 minutes and thorough scrape the sides. After 30-45 minutes, I turn mine up to high (my soaping crockpot doesn't have medium). Within about 10 minutes, it will bump it over the edge into vaseline stage.

Thank you for the suggestions! And, yep, I think it's overcooked chunks. I got some lighter paraffin wax looking chunks and some dark green spots. Odd! Very interesting looking soap, but I kind of like it! Has a army camo look. I'm also surprised by how soft the soap is but it's mostly soft oils, so I guess it's to be expected. You can see where I accidentally scraped it a bit because it's so soft! I had to leave the 1lb squares in the mold for 3 days before I could get it out with little damage. 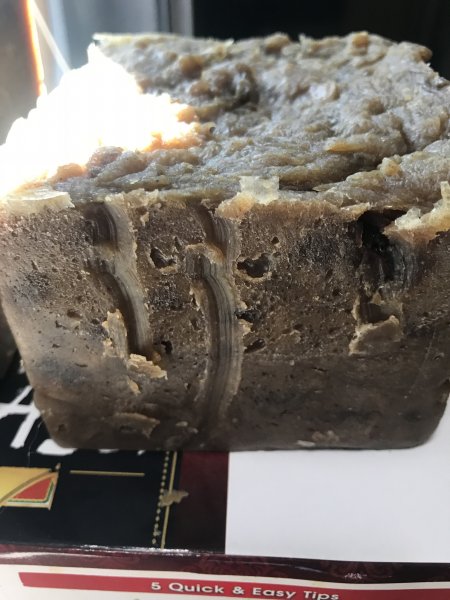 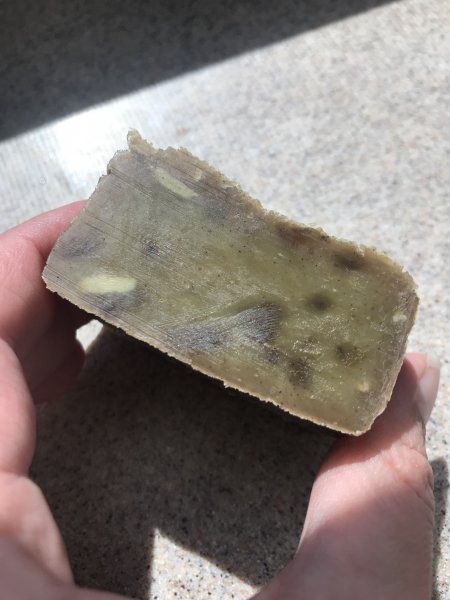 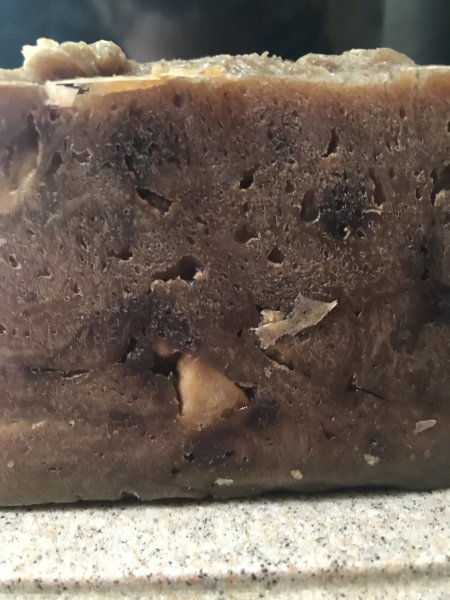 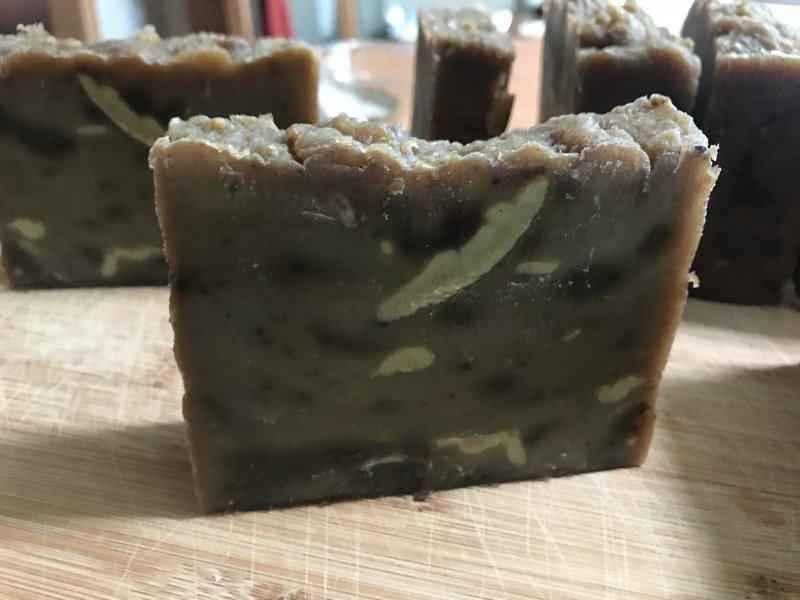 Uneven saponification and lack of water. Next time, if you want to use clay suspend it in the oils, you have to stir like mad to get it evenly distributed in the finished soap.

Also, I'd use more water next time -- for HP I always use "full water" in the calculator, you lose quite a bit to evaporation if your crockpot doesn't seal really well.

I'm curious as to why it was so soft through -- typically I can cut mine about three hours after I put it in the mold, as soon as it has cooled off enough to be solidified, and waiting two or three days would be a huge problem it would be very hard by then. I did make a soap with soy wax and vegetable oil (assuming it to be half canola and half soy) that stayed quite soft for a while. Very nice soap except that it got DOS, next time it will get the full EDTA, BHT, and citrate treatment.

Location
Somewhere Over The Rainbow

@Danielle_WM Mine was exactly the same! It's STILL semi-soft and it's been almost 6 weeks. I ran the recipe in another thread for confirmation that I'd done it right (I DID use soapcalc.net for the recipe), but it was my first time using seawater (NOT water with sea salt) and adding the fruit puree as a substitute for some of the water.
One more thing, I decided to HP it because it had had some sort of separation when I did a CPOP on it. If I do anything even remotely similar next time, I'm going to wait to see if the "liquid" is re-absorbed.
I might have to rebatch it or something if it doesn't get harder.
Good luck and PLEASE, let us know if yours gets harder.

@psfred Yes, they're still somewhat soft today. Very odd. But, they do seem to be hardening up slowly. I'm going to test out one of the smaller ones today and see what happens. I was worried about uneven saponification. That is most likely what happened. I will increase water next time, and I will definitely mix the clay with the oil next time!

@Iluminameluna I will let you know how this soap turns out as it "cures." I hope it doesn't take 6 weeks, but at this point I think mine may be unusable. I'll see if I can get some lather out of it tonight! P.S. You're soaps have a beautiful color though!
P

Cure will take six weeks, HP doesn't cure faster than CP. It's safe to use as soon as it's cool since it's completely saponified, but otherwise it behaves exactly like CP. No shortcuts, alas.

It took my soy/canola soap a couple months to really firm up.

A
CP soap looks off, help?

How to Make Soap - Soapmaking Guide for Beginners
2 3 4

S
Is shea butter is the culprit?

Boundary between HP and rebatch