Just did a clear test for my glycerin base LS that thickened today - came out 90 percent clear - that's way better than yesterday.

Update - based on the PKO/CO Shea/Palm disucssion, I'm looking at soapcalc figures to compare butters to oils and so on to see about getting similar results but using less of the expensive stuff. Geeky AND soapy

I don't make soap but last night I was watching soap TV channel with my 13 yo son and he wants to make soap. He now knows the difference between CP and MP and knows a few suppliers and even thought we need to buy utensils from the dollar store. I'm buying him an MP kit. He was very attentive watching the videos. he never pays this much attention to anything other then his video games. I'm excited to have found something that he is interested in other than his video games. Thank you girls. If it wasn't for this wonderful forum and your awesome creations I wouldn't have gained interest in soap.

Unmolded my 2nd batch of salt bars, used Pink Himalayan salt and scented with Satsuma FO, smells wonderful cant wait til they cure!!! I also sniffed all the other bars I currently have on the rack...aloe mint, tomato soup, banana coconut milk. Lastly, I went to my "to make" list and crossed off the salt bar, then checked which ones I had left for this month (OMH, and PB&J). I *think* I'll take a soap break after those two, enjoy using what I've made, and start wrapping things up to prep for moving.

I look forward to seeing what he (and you!) come up with - great to find something that interests him and does more than build strong thumbs and an aversion to fresh air in kids!
I

I'm still studying soap making.
Sometimes I feel like I'm procrastinating but truly every
time I come on here I learn something that seem simple
but if not for here I would not have known.
For instance I love everything picked up and clean in
the kitchen so I would have been inclined to soap, pour
and clean up. Thanks to this thread, I know to clean away
as much soap as possible then let the soaping items
sit around a day or two and then wash.

We're moving to a bigger place so we can make more soap. I took advantage and ordered bulk everything... hubs will probably kill me but at least we will be clean and the house will smell delicious. Also cleaned soap-ware... nightmare but happy.

Just made Genny's Shampoo bar HPCP and used it last night - absolutely fabulous! I can't believe how much body my hair has today, and my hair was squeaky clean as I rinsed. I don't do a vinegar rinse either so just the shampoo. Amazing!!!

Just unmolded two batches that I made on Sunday night. One is hot chocolate soap (complete with soap marshmallows embedded on top!), and the second is a soap I made with blood orange FO and freshly grated orange peel. I can't wait to cut them! The hot chocolate soap will be ready to cut today, but the orange soap will need an extra day or so.


jules92207 said:
Just made Genny's Shampoo bar HPCP and used it last night - absolutely fabulous! I can't believe how much body my hair has today, and my hair was squeaky clean as I rinsed. I don't do a vinegar rinse either so just the shampoo. Amazing!!!
Click to expand...

I made Genny's shampoo bar (CP) a couple of weeks ago, and am still waiting for it to cure. I'm glad to hear that you liked it! I would never have thought I'd like a shampoo bar, but had to give it a try after reading all of the rave reviews.

Okay, did a couple things so far... First I put in an order for more supplies, mostly color and fragrance samples... I was trying to stick to uncented or EOs, but I broke down. I love scent! *sob* Heh. Even the samples are good for at least two batches each, with the size of batches I make. Or more, if I want to mix them together! (Which honestly, I likely will.)

I also bagged up the frozen marshmallow tea, for when I want to use it. I can't believe how hard it was to get those cubes out of the tray! I think I might play around with freezing other liquids, just so I'll have them ready to play with. Coffee I'll get from work (we rarely use the whole carafe on weekends), and I have a bunch of Lipton left over from when my parents lived here that my friends will not touch. Might as well use it for soap! (Yes, that is my thought process.

As an aside... Does anyone was and reuse nylon stockings that were used for straining liquids or oils?

Not any for a couple of days. I am busy playing with my Cricut Expressions. I feel like a kid in a toy shop.

Today I played on soapcalc for a few minutes. Debated whether I should buy the soapmaker program. Stalked the forum. Didn't make any soap since I had homework to turn in.

I might use that argument to convice The Admirable Lady to let me buy this -
http://www.amazon.de/Digitale-Tischwaage-Laborwaage-Pr%C3%A4zisionswaage-Feinwaage/dp/B004S6JHMO/ref=sr_1_1?ie=UTF8&qid=1392215648&sr=8-1&keywords=3kg+0.1g+waage

I get excited about equally silly soap making things, the thought of a balance that weighs down to 0.1g increments would be amazing and so useful.

A while back I had made a 4-coloured soap, (white, orange, yellow and red) that riced on me when I added the F.O. I had already split the batter and added colours before I added the F.O, so it was too late to just HP the batch as a whole or it would have come out spam coloured. It really p***** me off, so I just poured the muck anyway, but now I'm stuck ten bars of this spiteful soap that I need to recycle. The soap is nice and creamy and is perfectly usable, it just looks horrible to me with all those little pale dots in it. Ugh! A non-soaper probably wouldn't know there was anything wrong with the soap, but I know! So, I've spent the last two or three days shredding, chopping, dicing and slicing this soap from hell and then trying to come up with a host of different embed designs and do-overs I can make to get the soap used up, without getting too many soaps that look similar. Man oh man, how can ten bars leave one with so many shreds and chips?!? I swear these soap shreds can replicate themselves... like bacteria. There always seems to be more of them every time I look! I am still angry and offended by the nerve of this soap to screw itself up like it did and just looking at it makes me want to throw it all out the window, but I am too much of a cheapskate to do that. I have to get this soap out of the way and get something done with it, because somehow it seems to be demanding my attention and won't let me forget about it and it's keeping me from making the soaps I really want to make and all the while my to-do list is growing at breakneck speed!

The soap is cursed! I'll betcha it won't let me re-do it without causing me grief. *Sigh* I hate this soap with a passion and... I just want my life back.
. 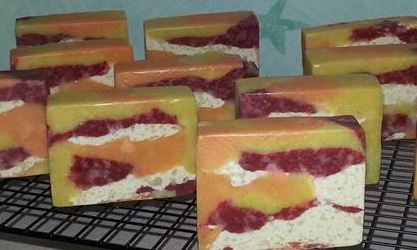 I might use that argument to convice The Admirable Lady to let me buy this -
http://www.amazon.de/Digitale-Tischwaage-Laborwaage-Pr%C3%A4zisionswaage-Feinwaage/dp/B004S6JHMO/ref=sr_1_1?ie=UTF8&qid=1392215648&sr=8-1&keywords=3kg+0.1g+waage

I wish I had the ability to make my own database. I will eventually take the easy way out and purchase the program.

You have also reminded me that I need a new scale. The one I currently have weighs 0.0 ounces.
Last edited by a moderator: Oct 23, 2018

i also want to make more gm and dsm soaps, but is currently stuck in the inspiration department. guess i need to dig in to pinterest to look for some ideas..