With my guest size soap, I figured out how to cut my slab mold to get 1.5 oz bars that fit my usual labels.
I now have a small commercial acct., a bed and breakfast. The owner has requested an oval soap in a 1.5 oz size.The molds I have to work with have 1.25"x 2"x .75" cavities.
My question...how in the heck can I package and label these?
I found this pic on pinterest, and I like the idea, but packing them without crushing would be difficult. Thanks 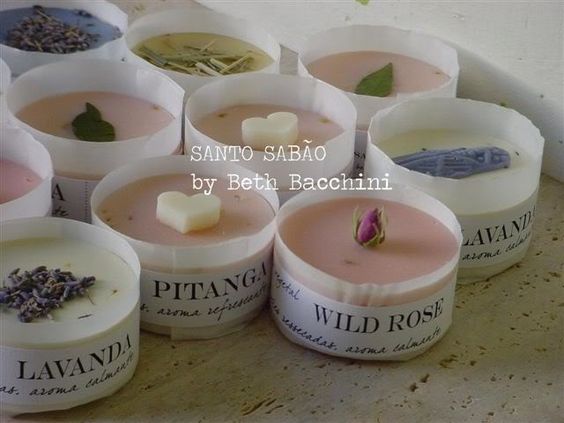 I agree that the edges sticking up look nice, but I'd worry that the soap itself wouldn't be protected and would get dusty sitting around at the B&B.

For anything with rounded corners, I like to use coffee filters. I've seen folks doing this very often and the effect is quite nice imho. Really any heavier-weight tissue paper cut into a round would work. Mine look a little like this: I wonder if shrink wrapping would work well for that. Here is a company I've been looking at to expand my packaging possibilities. I like that they have a biodegradable option. http://www.nationalshrinkwrap.com/home.html

You may already know this, but I thought it might be good info for others as well. With guest size bars you don't have to list ingredients under USA cosmetic label laws. If you sell the guest size bar retail & make cosmetic claims then you would need to.

Since the FP&L Act applies only to consumer commodities and their packages as defined in the Act, cosmetic ingredient declarations are required only on the label of the outer container of cosmetics customarily sold at retail or used in the performance of services conducted within the households. It does not apply, for example, to products used at professional establishments or samples distributed free of charge, unless such products are customarily also sold at retail, even if they were labeled "For professional use only."

The ingredients must be declared in descending order of predominance. Exceptions to this requirement are discussed later."
Last edited: Mar 6, 2016

I love the idea you found, but I agree that it would be easily crushed not only in packing them for delivery, but in storage at the B&B. I also have been using coffee filters for round soaps and like how they look. Tissue paper maybe?