I've melted this soap down 4x and I'm starting to worry about its integrity.

First melting: 1:1 soap to water. As it was heating I reread Deanna's tutorial about salting out soap. I should have used double the water but was too lazy to measure out more. I'm also sure I added my salt too early.

Second melting: after almost none of my water/salt separated from my soap I threw my hands up and added the rest of the gallon to my pot and let it sit a week before I got around to heating everything again. For giggles I added the remainder of my container of salt when everything was melted. (For reference I started with 34oz of soap and had a 26oz thing of salt - the cheapest table salt)

Third melting: most of the water drained out fine but when I weighed my soap it was 59oz, assumption that it's just full of water. Attempt to boil out the water. I get it bubbling for roughly a half hour (or longer I don't remember). When it seemed like the consistency wasn't changing anymore I poured it into molds and got a bit more water to separate.

Fourth melting: about an hour after I put the third attempt in the fridge. I had it bubbling for 45-60minutes before molding and putting in the fridge for the day.

I just unmolded and weighed my soap - 49oz so the boiling worked a bit. At this point I'd be comfortable doing one last melting to add in a new fragrance and being done... except for the texture. There were white specs on top of the soap when I took it out of the fridge. I almost think it was salt. The texture is very grainy and brittle (almost wet sand). Should I wash my soap another time? Is this soap just going to be grainy? I originally was intending to add glycerin and other oils. Should I just take what I can get?

Pic is of what it currently looks like. I just chunked it up and am leaving it on the stove to hopefully evaporate a bit more. 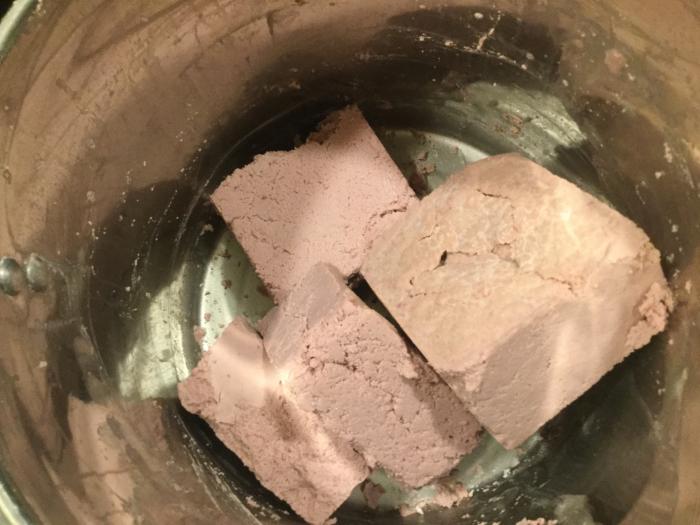 Now it's leaching salt. I am very confused by this soap. 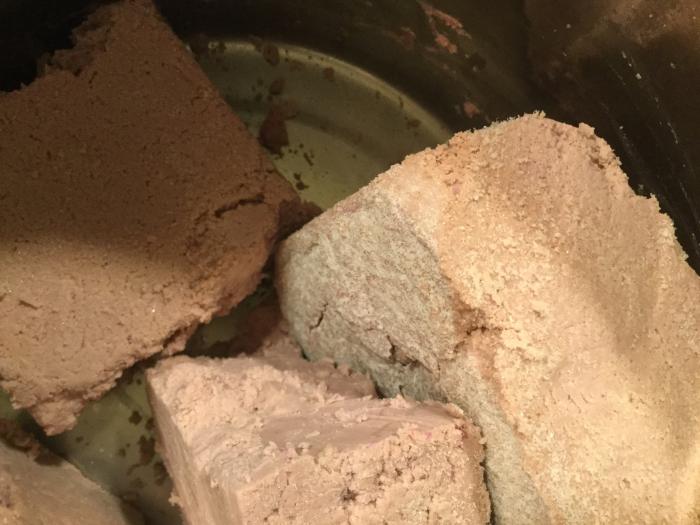 Did you watch her video or just read her description on how to do this? I have not done this yet but have thought about it.

I have done both.

My choice to not add the extra water then getting impatient about letting the soap melt were th mistakes that led me here. I'm just confused because of the salt leech. I was under the impression that salt will not mix with soap (once it's made) but maybe it's just a matter of salt being more willing to mix with water. Not enough water = salt mixing with what it can.

As it sits in time out the soap texture seems to be improving, the salt seems to be leeching out like soda ash for the most part. I can easily scrape it off the sides while the top looks exactly like soda ash (all the original soaps were well cured).

I think this might possibly "wash out" after letting it sit for a while but I'm scared to end up with waterlogged soap again. At the same time I don't know if a "cure" will magically make the problems go away.

MDid you let it sit in a strainer each time? The water drains out kind of slowly, but the thinner the layer of soap, the faster it will drain.

I lined a strainer with a tea towel once, gauze another time. The tea towel was easier to clean, so I would recommend avoiding gauze, but water drains out faster with gauze. Then I set the strainer inside a large bowl to collect the water.

Each time I salted out the soap, the foamy floating soap on top is what I spooned into the strainer. Also with each boiling water wash (and salting) the leftover brine became lighter in color. Is that what you are getting?

That's another mistake for me.

I did not strain it and honestly didn't think about it until it was a solid mushy mass. The strainer I have is not the best and I was hoping everything would separate out and I could scoop the soap off the layer of water and assess it before figuring out the strainer issue. That's also why I tried boiling the soap after the fact to force out some water, which obviously didn't work out the way I wanted. The water that I have been draining out is much lighter now but has been fairly consistent in color. I attributed it to an overuse of lab color in one of my soaps (which is why it was in this experiment).

S
I used the wrong salt!