What happened to my soap?

I'm new at soapmaking - I've done eight or so batches. My latest batch is a coffee soap that I want to use as a kitchen soap. The recipe is 50% lard, 25% olive oil, 20% coconut oil and 5% castor. Batch size was 25 oz, lye a concentration was 30%. I used strong coffee for the lye water, and added about a tablespoon of used, finely ground coffee at trace. I wrapped the soap in a blanket and set it on a heating pad so it would gel.
When I cut the soap, I found pale halos surrounding the coffee grounds in the soap. It doesn't zap, but it looks odd. I've seen other coffee soaps, and they didn't look like mine. Does anyone know why this happened? Hopefully, I've attached a picture. 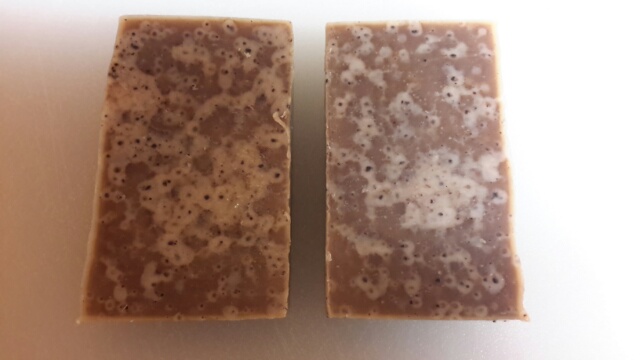 That looks cool!! I'll wait for someone else to chime in with a reason your soap did that because I couldn't tell you why. I add some processed Dutch cocoa powder to my coffee soap; it colours the whole batch a deep dark brown.

I can't say for sure about your soap, but haloes similar to this can form at the border between high water soap and low water soap. If your used coffee grounds were still damp, that would raise the water content in the soap surrounding each grain of coffee. The soap further away would be at a lower water content.
G

The grounds were from that morning's moka pot, so they were a little damp. Thanks, DeeAnna, for the quick reply. Misschief, thanks for the tip about cocoa.

Yeah I think thats a re-creation of Aunty Claras water discount crop circles. Its a neat effect, and its funny what patterns you can make with just different water concentrations.

Yes! And we also noticed this halo effect in some of the soaps people made for the recent high-low water challenge -- December, I think?

ETA -- And there have been a few people who have put a small amount of salt crystals in their oils and wondered why the soap ended up with a speckled look -- very similar to Ginger's soap. Maybe the salt speckling is another example of the high-low water halo? Just wondering....
Last edited: Mar 11, 2016
You must log in or register to reply here.
Share:
Facebook Twitter Reddit Pinterest Tumblr WhatsApp Email Link