I don't know if anyone else has this problem, but it seems i get ash on all my soaps - whether I spray with alcohol, water discount, put the soap in a heated oven, or not. What's going on? Could it be that I use extra virgin olive oil? Or am I just not discounting enough - I usually soap at 32% lye concentration (which is a discount, right? or is it only above 33%?). I even got ash on my salt soap! I'll try to find a good pic of it.
pics of my salt soap with ash 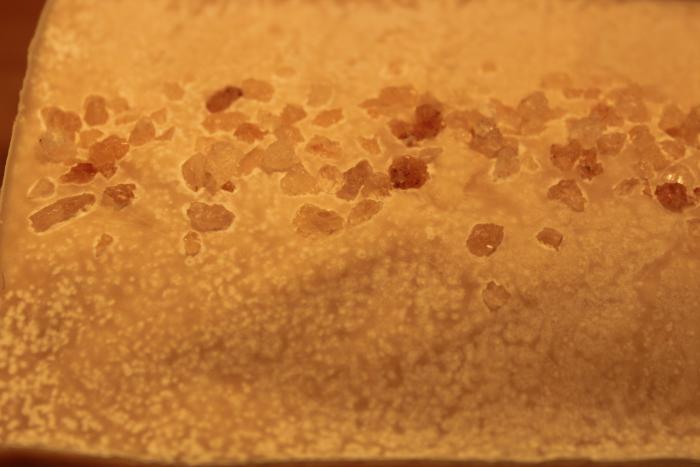 I can only speak to my experience. I've found that spraying them with 91% alcohol and then covering them and leaving them covered until saponification is complete and cooled. Then I rarely get ash. However, if I don't leave them covered I get ash everytime. If they don't gel and are left uncovered (individual molds mostly) I get ash really badly. So, I spray and cover and only lift to check for overheating.

Every time I read a post where people suggest rinsing, steaming, brushing or preventing ash with alcohol think they're lying or delusional. My soaps often get heavy, stubborn, thick ash and it doesn't matter what the recipe is. And it develops for weeks! In fact I'm surprised if I don't get ash. Gelling does not help much either.

Its not washable, rinseable, steamable, or preventable in my house.

If I had a soap company I'd have to name it something like "Frosted Soap Company" because the soaps actually do look like they're frosted!

Sorry, but I don't have any help for you, or me.
D

Is there salt on the top of the soap? Or something else? That doesn't look like ash to me. Have you tried distilled water?

I very rarely get ash, and one thing I can point out that makes my situation different from a lot of folks - my soap is in a room with a dehumidifier.
M

Ash is one of those mysteries that I will try to solve until my dying day! I always thought it had to do with the temp of the soap when molded and the temp of the air around it. However, lately I've been piping the tops of almost all of my soaps, using a separate recipe/batch. My base recipe sometimes gets ash, but my piping recipe never does. Considering I soap both at the same temps and the finished loaves (containing both batches/recipes) are exposed to the same room temps, it must have something to do with the recipe. BUT WHAT!?!

Do you cover with saran wrap or something else? I do cover my soap, but ran out of cling film and so I only covered with a wood board. Maybe this is the problem...

Yes, in the middle there's a line of pink salt crystals. The rest is just ash... Very frosty looking ash...

Yes!! Exactly! This is what happens to my soap. It it comes out without ash, it will DEVELOP the ash. And we're talking wildly different recipes, different water %, covered, uncovered, gelled, non-gelled. I'm starting to think it has something to do with where I live: it's very humid in Montreal. So the dehumidifier makes sense! Is it humid where you live?
G

I am new to soaping and this ash thing has me mystified as well. I recently made a 4 pound batch that I split evenly into four smaller one pound batches to try different scents. Some got ash, some didn't. So I think that there is an interaction between scents, colorants, and gelling.

Here's what I made and the results. All scents and colorants were from Brambleberry.

1) Drakaar scent, no colorant, no gelling = no ash

2) Shave and a haircut scent, a bit of ultramarine blue, most of the batch I CPOP to force gelling, but one bar I left out and it did not gel. The CPOPed ones have just a tiny bit of ash, the one that did not gel has lots of ash.

3) English Rose scent, a little ultramarine lavender(daughter picked that out), CPOP to force gel. No ash

Did you use distilled water?

Kevin Dunn in Scientific Soap making says that ash can be caused by a few things:

1) excess sodium hydroxide (solution - spray with isopropol ethanol)
2) excess Sodium Carbonate (solution - cover mold)
3) impurities in water, silica, clays, talcs, and other additives such as colours and modifiers. (solution - alcohol, cover, reducing water or some other method such as changing your additives).

My salt soap is very prone to getting heavy ash. My regular bars, not so much.

If you are spritzing with alcohol, be sure it is 91%. I once got hold of the other kind and durn! Got that ash!

I add 2% beeswax to my calculations and use a 1.5:1 water to lye ratio. Very seldom do I get soda ash in any significant amounts.

Ah I just got that book from my mother in law. I haven't read that part yet though. In the salt soap I used filtered water, not distilled. But I just made a soap with distilled water and it got ash as well - although a bit less. I sprayed it with alcohol too though... Maybe it's because I used a mix of 71 and 91% alcohol (the tube of my sprayer didn't reach all the way down so I topped it off with a different alcohol instead of transferring to a smaller bottle..Duh!). Glad to know that it's not the OO or my 33% lye concentration. I'm going to get that 91%, cover with plastic and stick to distilled and see what happens and report back
N

I'm curious about this as well. It seems to me that I get the ash developing after I cut my bars too early (because I'm often impatient and don't want to wait over 24 hrs to cut ). I think this was mentioned before here? Does anyone else find this? The scientific soapmaking book is awesome, penelopejane!
K

I think you guys are on to something when you mention living in an area of high humidity. I live where the average humidity is about 15-20% and rarely get ash now that I've decreased my water content. The major exception is when I use Nag Champa. No matter what I do the ash is so thick I can roll it off with a cloth or gloved fingers.

Nag Champa fragrance oil? Definitely think it has something to do with the humidity and how the water evaporates. Maybe I'll try a steeper water discount Yesterday the humidity was 60%, it felt like July! Thanks for all the suggestions, can't wait to see what happens
K

CMars said:
Nag Champa fragrance oil? Definitely think it has something to do with the humidity and how the water evaporates. Maybe I'll try a steeper water discount Yesterday the humidity was 60%, it felt like July! Thanks for all the suggestions, can't wait to see what happens
Click to expand...

Yes, Nag Champa FO. When it use alone, very thick ash. When I use it in a blend, less ash. With this one it doesn't matter what water ratio I use, I still get ash. So, for me anyway, the amount I use ppo directly affects the amount of ash I get.

Ugh. 60% humidity. I applaud everyone that lives in that everyday. And it's only May!

nikkisessence said:
I'm curious about this as well. It seems to me that I get the ash developing after I cut my bars too early (because I'm often impatient and don't want to wait over 24 hrs to cut ). I think this was mentioned before here? Does anyone else find this? The scientific soapmaking book is awesome, penelopejane!
Click to expand...

I've been wondering the same thing, and I do think when I wait to cut I get far less ash on the cut sides. Can't say the same for the tops though.

Humidity might be one of the culprits? Last week I made 4 batches of soap and nary a one had a bit of ash. The weather was California May Gray - mostly overcast, 60's, and more humidity than we usually have. I actually prefer this weather over the blaring cloudless sunshine we usually have so I had all the windows open.
N