The entry thread for the January Hidden Heart Swirl is now open!!

Remember, your hear may not be painted on top of the soap. It must have been embedded and revealed by your cut (it's ok if your soap shows a heart on both sides!). You needed to use at least 3 colors.

Please let us know what kind of technique you used to obtain your hidden heart! We want to learn your secrets and get better together! (not a requirement but highly encouraged!)

My entry below is called 'Baby Girl' in honor of my second great-granddaughter born a few days earlier. 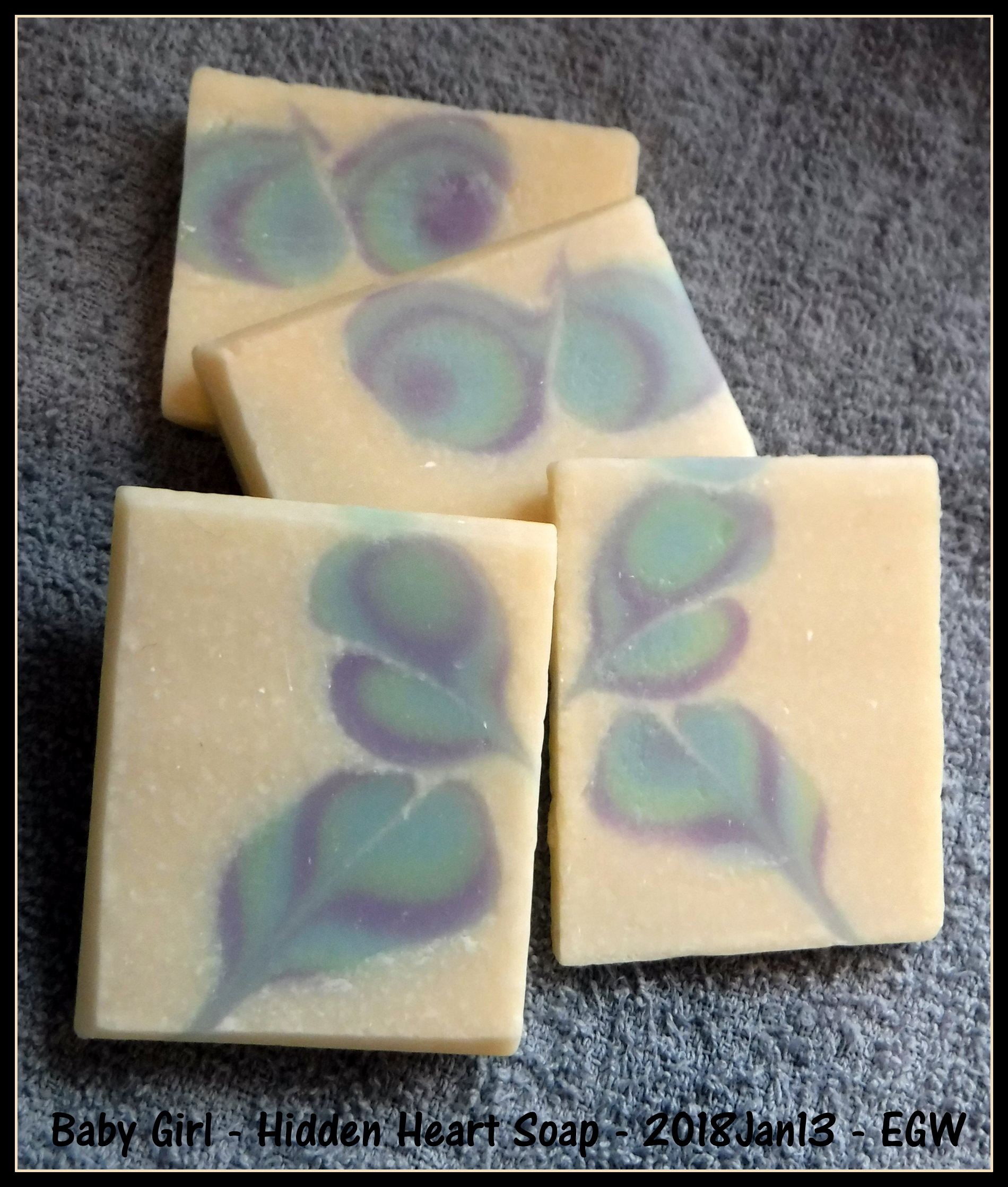 This was CP soap using 4 colorants: TD & 3 micas from Steph's M&M (cosmic purple, powder blue and apple green). Scented with Baby Bee Buttermilk Type FO. The mold for the mini soaps was a small loaf mold. The method was to pour the base, create the concentric circles with squirt bottles, cover the surface again, then using a chopstick, swiping through to create the hidden hearts. Before adding the top layer, I used a pencil to write arrows on the cardboard the mold sat on to guide me on where to swipe the chopstick to get the effect I wanted. This worked as planned in creating the hearts with a long slightly curved tail that I wanted.

I made enough batter to make the mini baby soaps and two larger bars (well, actually 4, once I cut them in half.) I made them in the same way as the 'Baby Girl' soaps, but they are larger so I am calling them 'Grandma's Hidden Heart'. Here's a photo of the Grandma and Baby Girl soaps together: 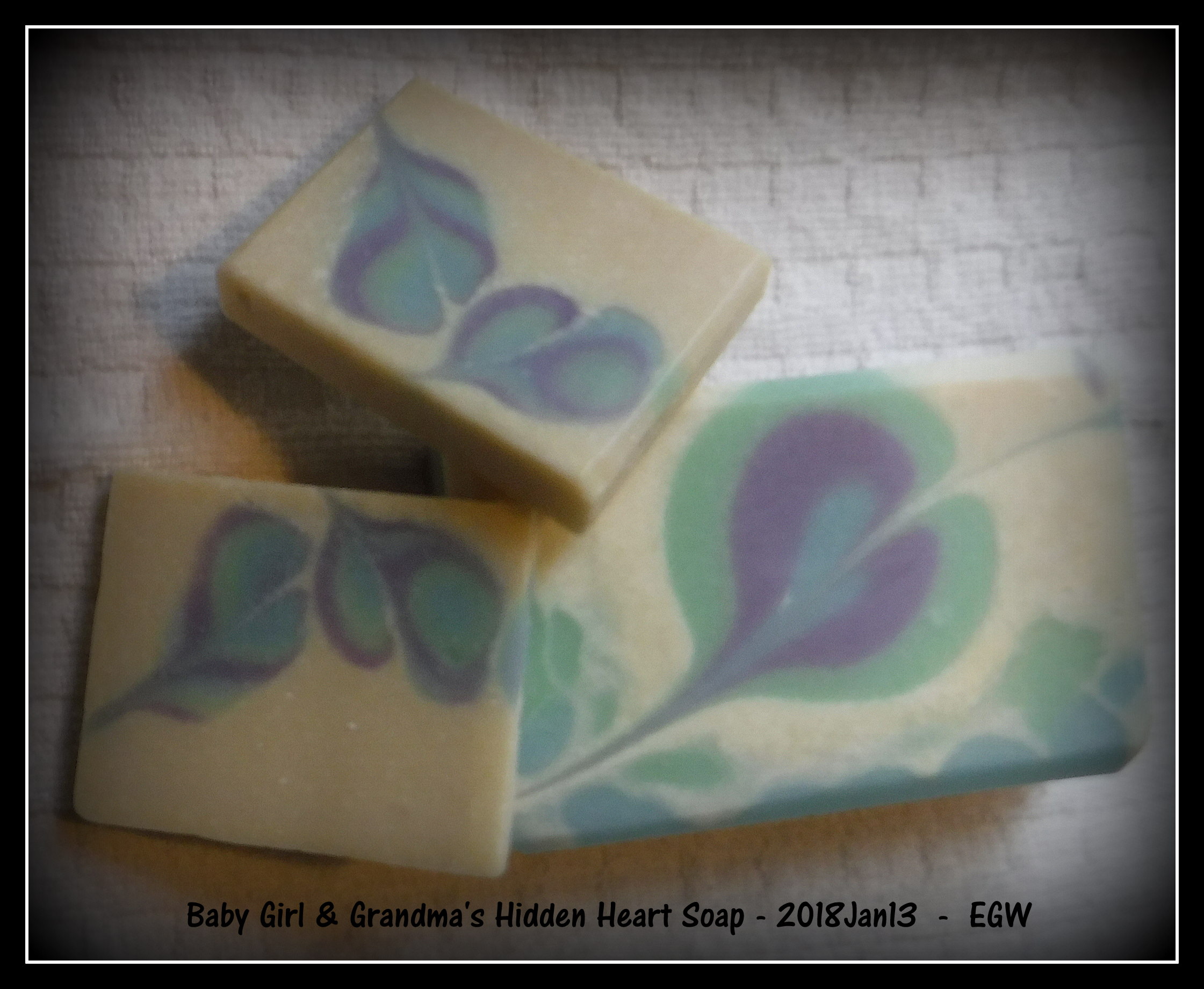 ETA: I forgot to mention my soaping formula: Rose-infused Olive Oil, Rice Bran Oil, Coconut Oil, and Shea (a formula I have become quite fond of lately), dual lye at [33% concentration] and a bit over 1/3 of water replaced with vinegar (with additional KOH to offset the vinegar). SF 3%.
Last edited: Jan 23, 2018

Not making another attempt so these will have to do. Thank you Galaxy for hosting and teaching! These are scented with Pheromone from Nurture and are made with lard, olive oil, coconut oil, and castor oil. White is titanium dioxide....colors are custom mixed micas from Nurture.

I hope I get time to try again before the deadline.

Just a tiny batch: lard, palm, olive, avocado, castor. I used my littlest loaf mold as a slab. I stuck 2 TP tubes in, poured white around them and alternated pink/gray/white in the tubes. Pulled the tubes, dragged a skewer through, poured the remainder of the white-- hoping it wouldn't shift the heart too much. I hope I wasn't supposed to take a picture before cutting... I like how they look with the hearts down in the corner, as if they sort of fell there.

So, I tried with a column and to make the column stand, I took a portion of surrounding batter and got it to thickest trace I can ( forgot to add fragrance to that part hence the white ) and poured a tiny layer of it and put columns in it.. divided the rest of the batter into 3 parts and mixed in colours to 2 portions and fragrance to all and I pored at medium trace. Finished off the final layer of uncoloured batter and ran the skewer through where I thought was right... The fragrance was breath of god. I used loaf mould. 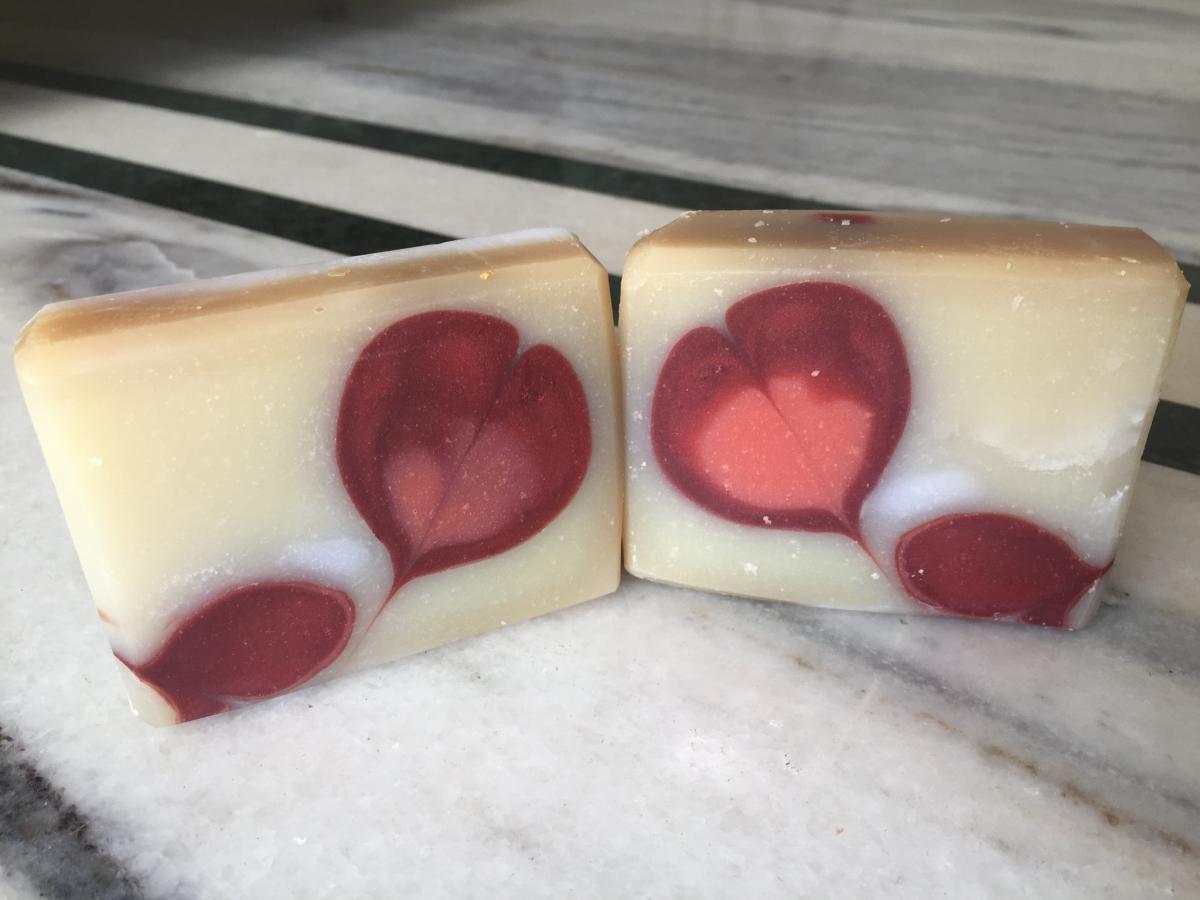 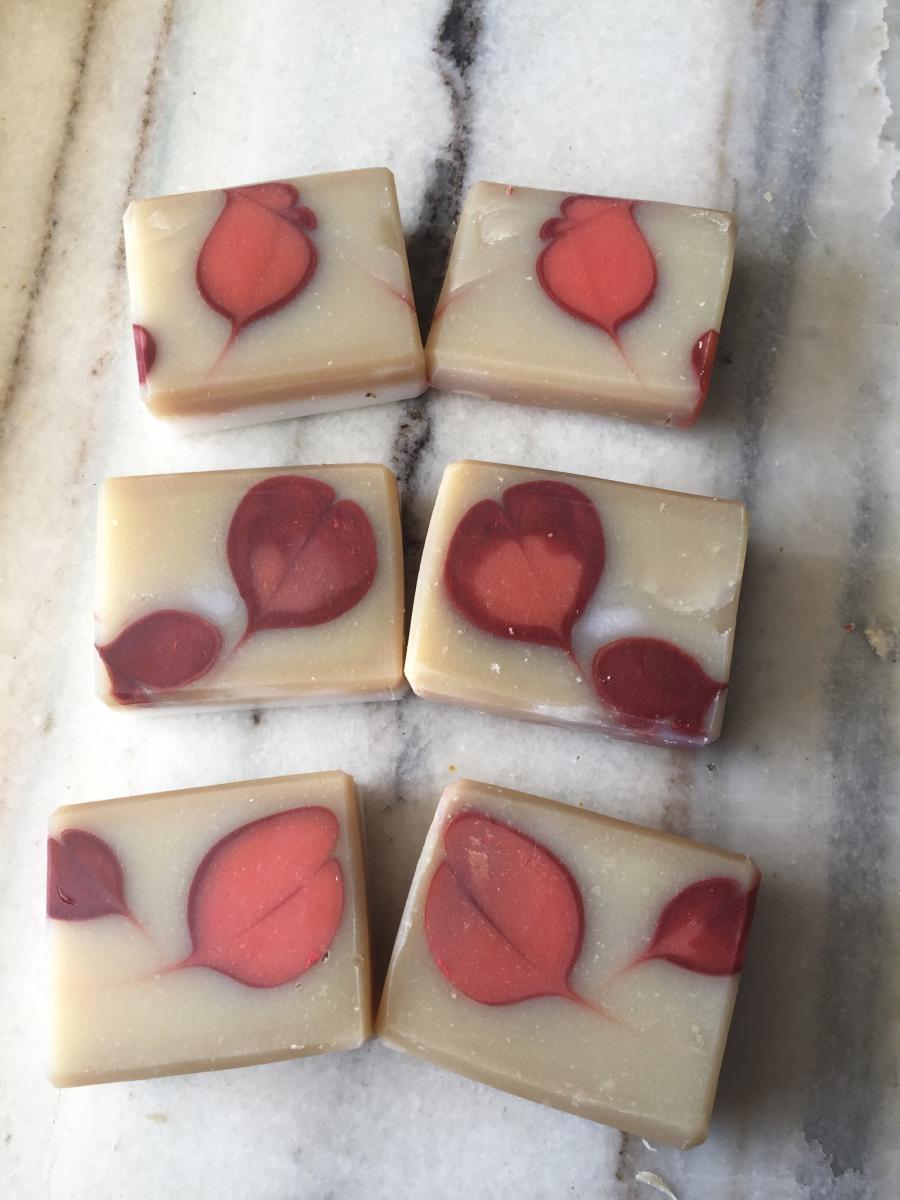 My entry is scented with Bamboo and Sugarcane from RE. Colors are Vanna White from MM. Amaranth Pink and New Leaf from Nurture. I first poured about half the white into my 4" CC mold, then set about making circles in two spots, it's a small mold so this is no easy feat! I used my tiny pitchers with the little spouts to pour the colors. I then poured white around the circles to hopefully keep them contained. I always think I don't separate out enough batter but it usually ends up being way more than I thought. That was the case here. I did manage though, to use it all and then top it with white and drag my skewer through it. It's really hard to fight the urge to drag it through more than once, but I knew if I did that, chances of dragging exactly through the first line were slim. I resisted the urge! I was pleasantly surprised when I cut it and there were "sort of" hearts in there! I did not want to try again as I just have SO much soap! I knew this was my only shot! It was a really fun challenge and it's been great seeing the non entry attempts and now the entries, so impressive already!

ETA: it's so hard to cut with a paint spatula thingy, that's how I used to do it but now have a DIY multi wire cutter, you can see my drag lines in there! LOL 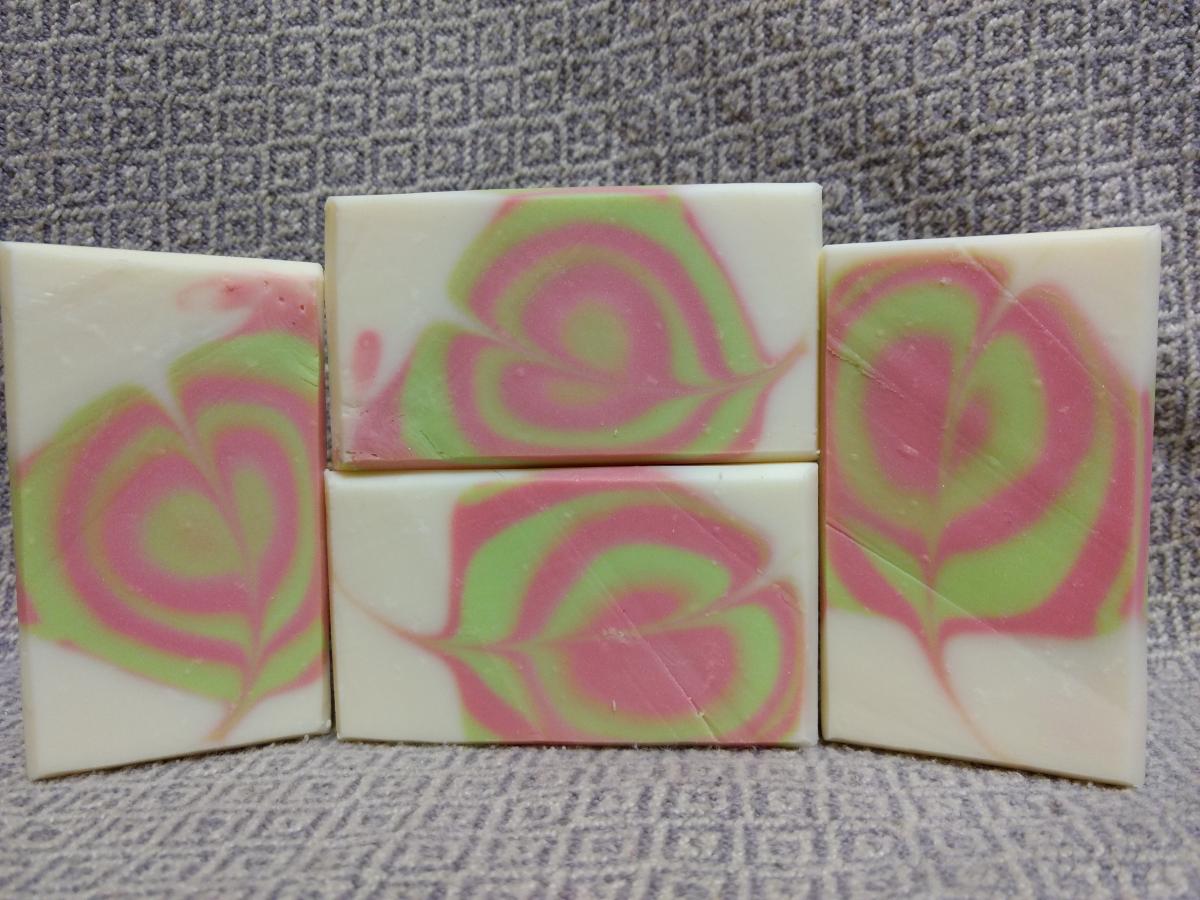 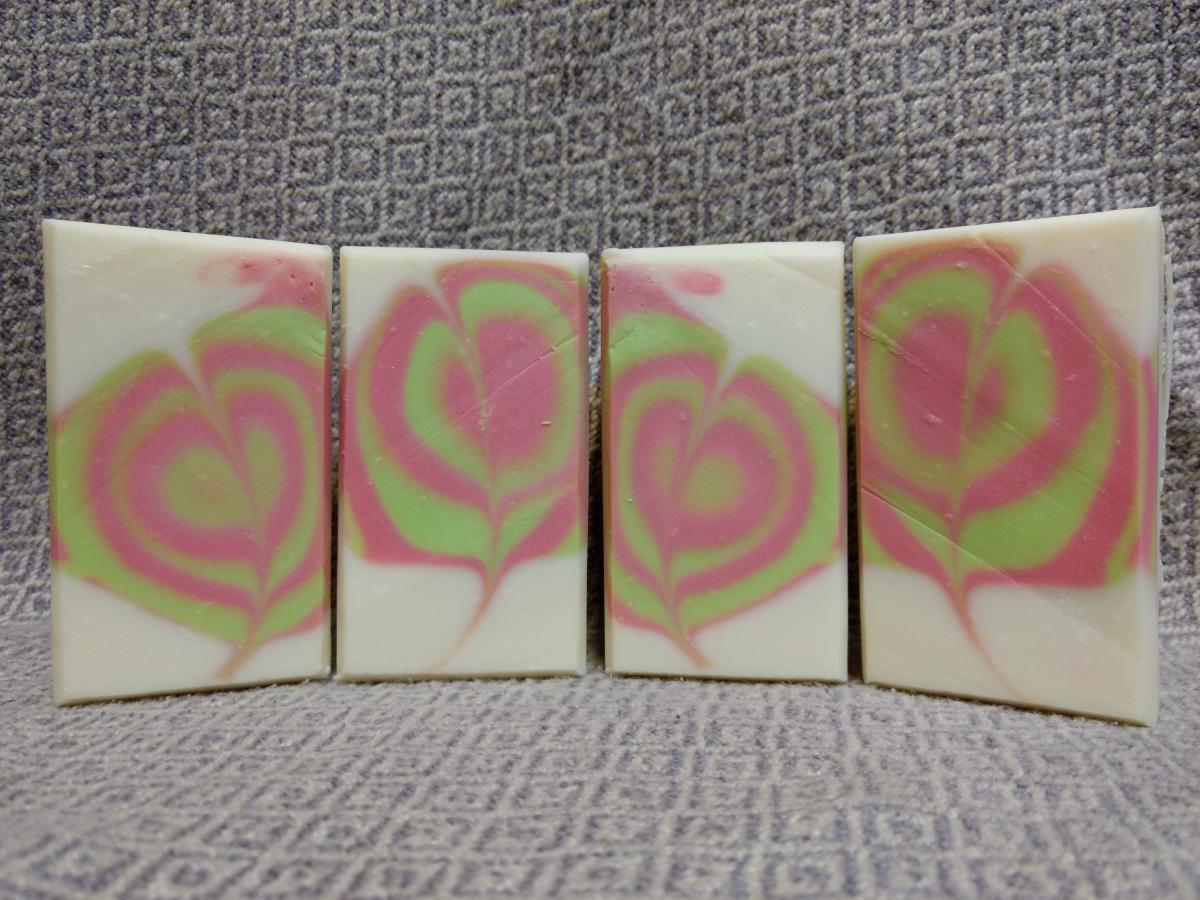 Not going to have time to make the third attempt that I wanted to, so here's my second one. Scented with a lovely, light citrusy EO blend and colored with pigment and micas from Nurture.

I didn't let it sit in the sun for very long, so that last picture may be a little hard to make out. It looked much brighter in person. I used glow in the dark pigment for the main color.

Posting pics - will edit for more info when I get to the laptop.

ETA: I'm calling this Amethyst Heart in Granite. I fragranced with Amethyst from Brambleberry. Mine and Chris' birthstone is Amethyst, and my engagement ring is amethyst, so it was kind of fun to tie this one all together. For colors I used Silver Graphite and Majestic Purple from Micas & More, Grape Nehi from Mad Oils, and water soluble TD. My soap recipe is 27% OO, 23% Tallow, 18% CO, 13% Shea, 11% Sunflower, and 4% each Cocoa Butter and Castor. I also use tussah silk, dendritic salt, kaolin clay, and aloe vera juice. The recipe played really nice, and it stayed fluid for quite awhile.

I poured mine the same as shown in the video using a funnel pitcher for the circles. The gray/white is just an ITPS, so I poured a thin base before I started pouring my circles. I poured the circles from a funnel pitcher, and then built up the sides as needed with the gray. I covered the circles with the base color before I skewered it. The thrill of the unknown. I used a 3/16" dowel rod instead of a bamboo skewer and stuck it all the way down centered at one end of my loaf and ran straight through to the other end of the loaf in one long drag. I originally planned to cut each section into 3 bars, but I did such a hack job cutting the first column, I switched to my multibar cutter and cut them into 2 bars. I poured 4 columns, and picked these two as the best. The other two look like hearts as well, I just like how these looked better. 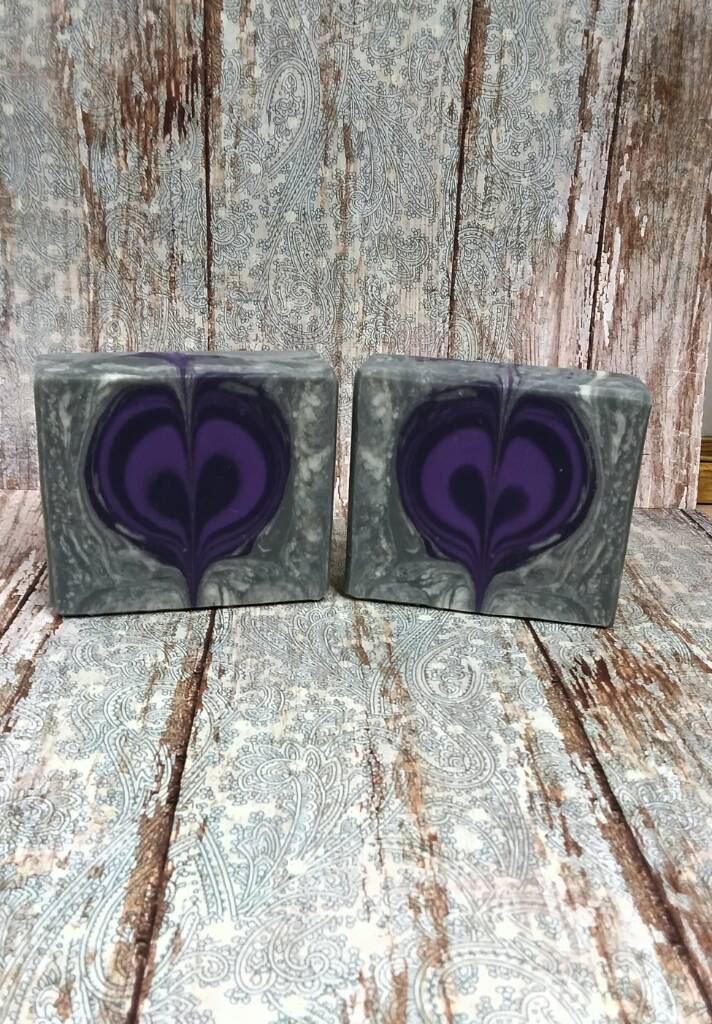 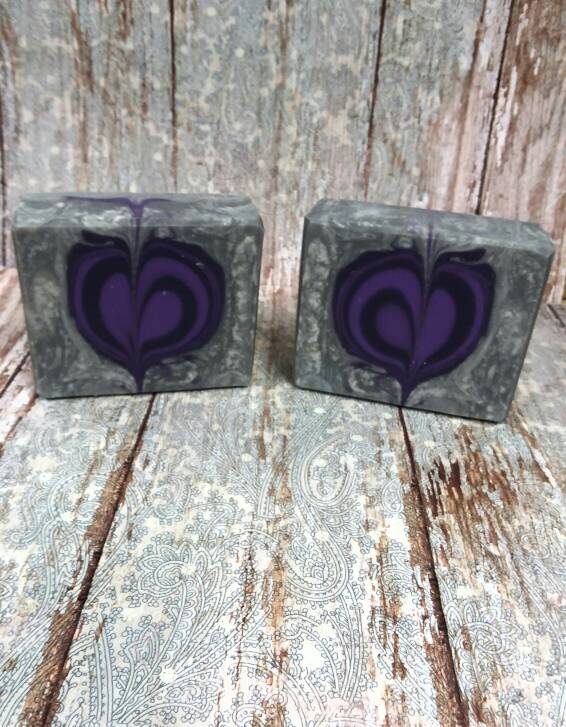 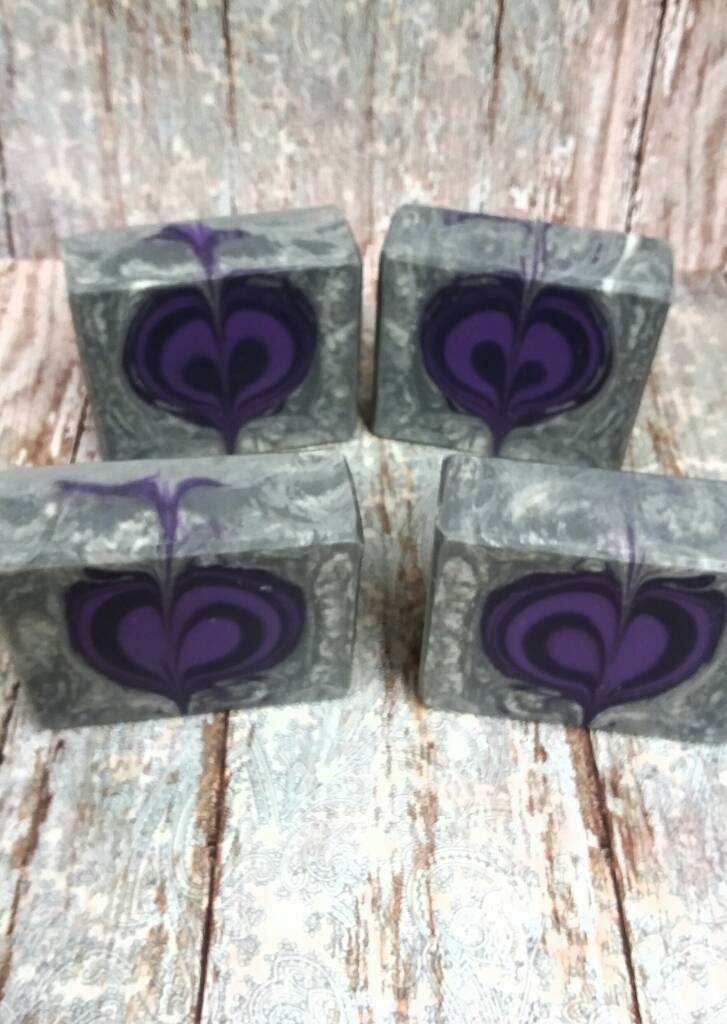 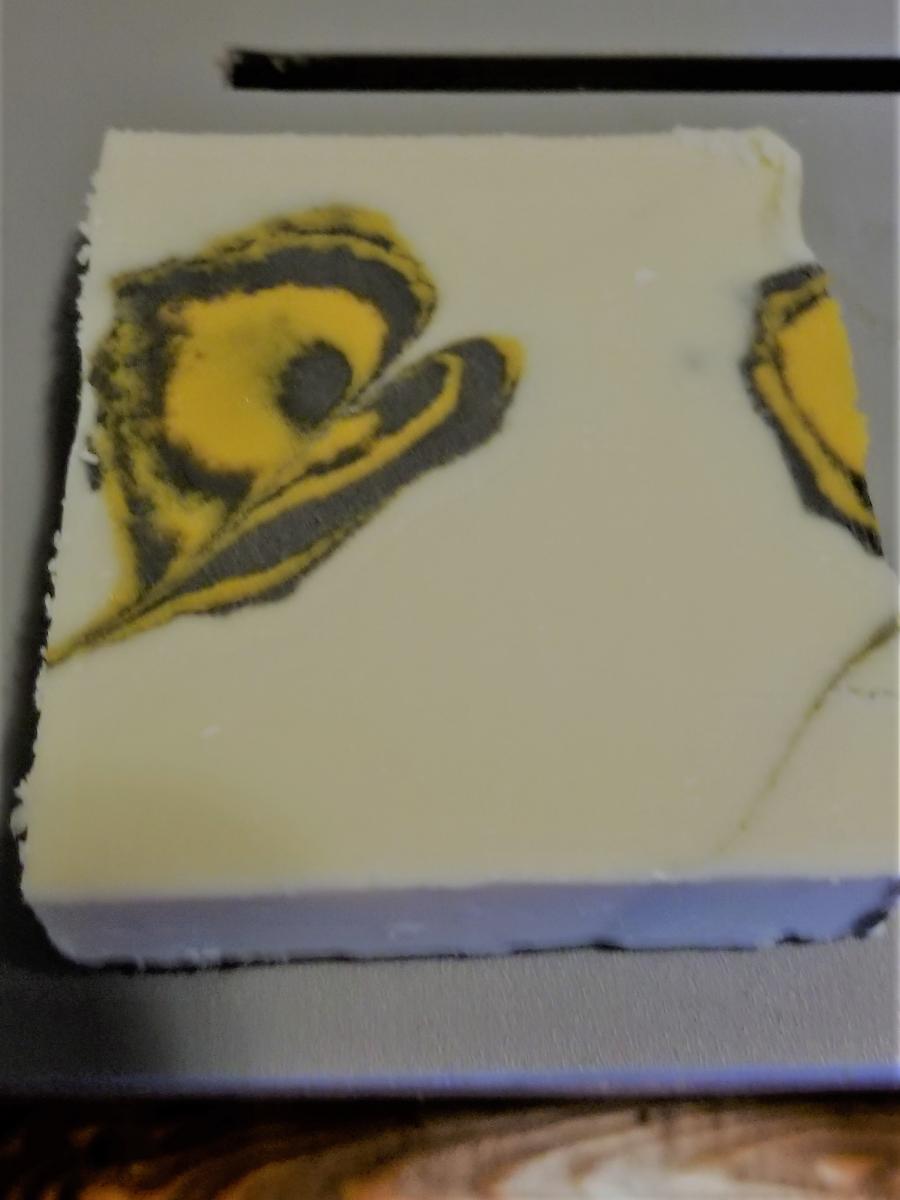 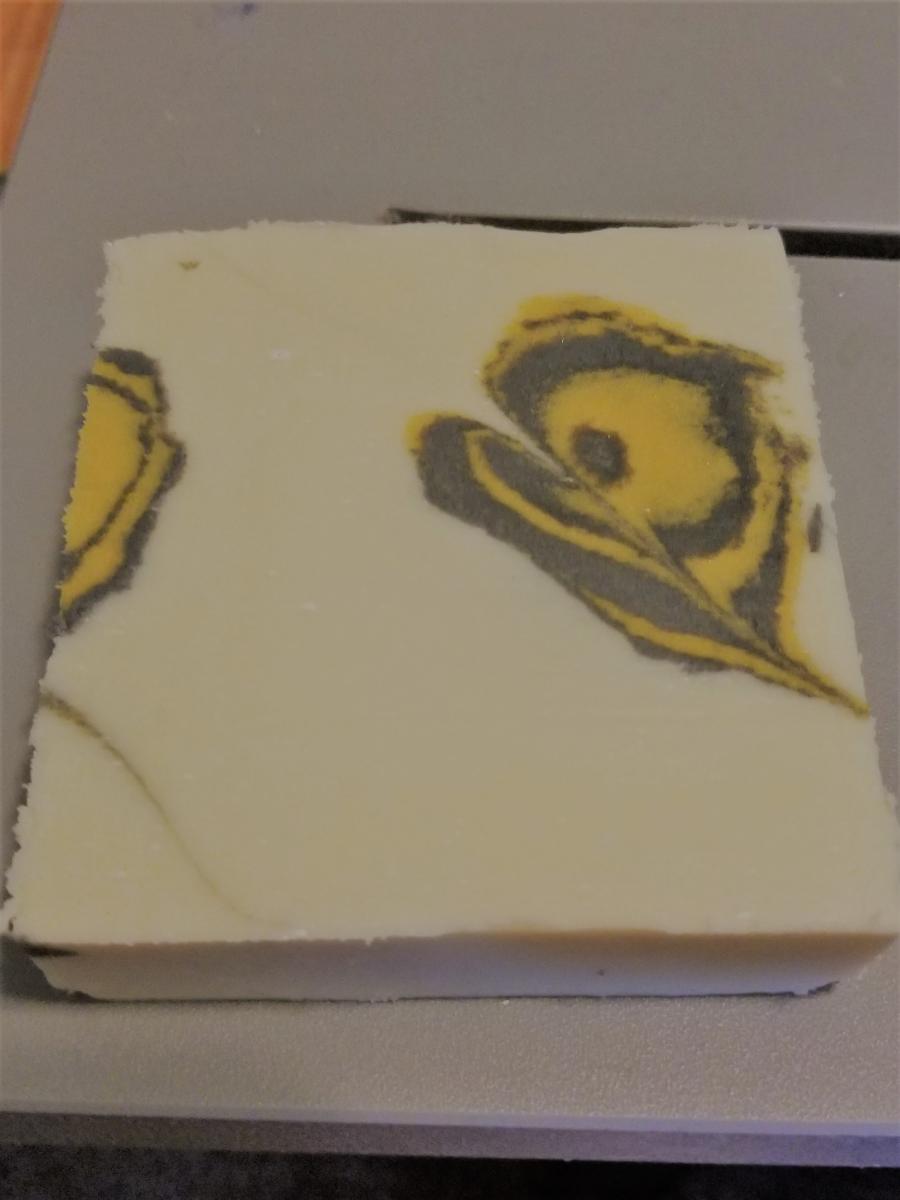 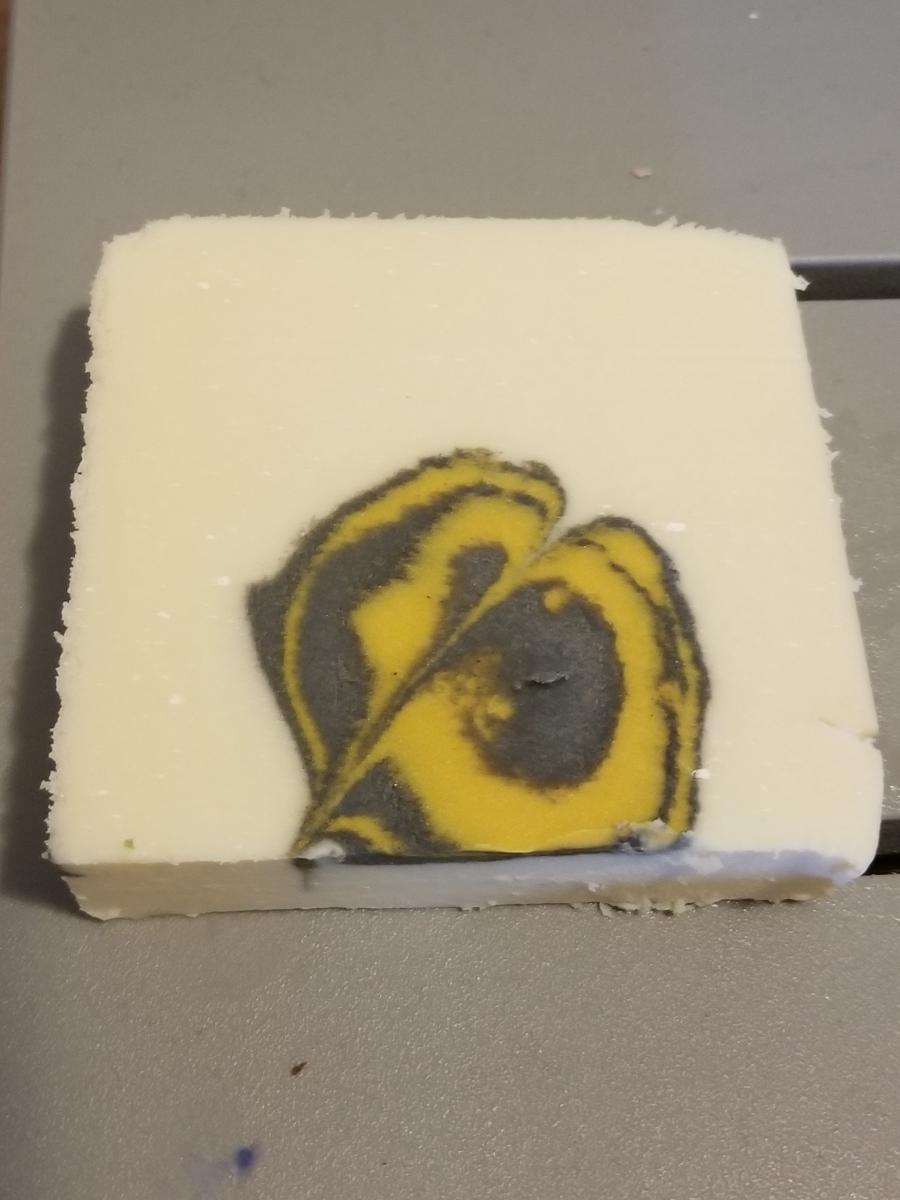 Here is my soap! It's called Pink Staccato. I used the technique shown in the video. I have 3 colors of soap, a dark pink, a light pink with glitter, and uncolored. I split my batter into 3 batches, added the different colors, and then just poured the light pink and dark pink in the middle while pouring the white on the outside, building up in layers. This is my 3rd attempt, the first 2 were quite blobby. This was actually done as part of my citric acid tests (with 0, 1, 2 and 3% citric acid), so this was the soap with 3% citric acid. The soap has lard, coconut oil, and soybean oil in it. 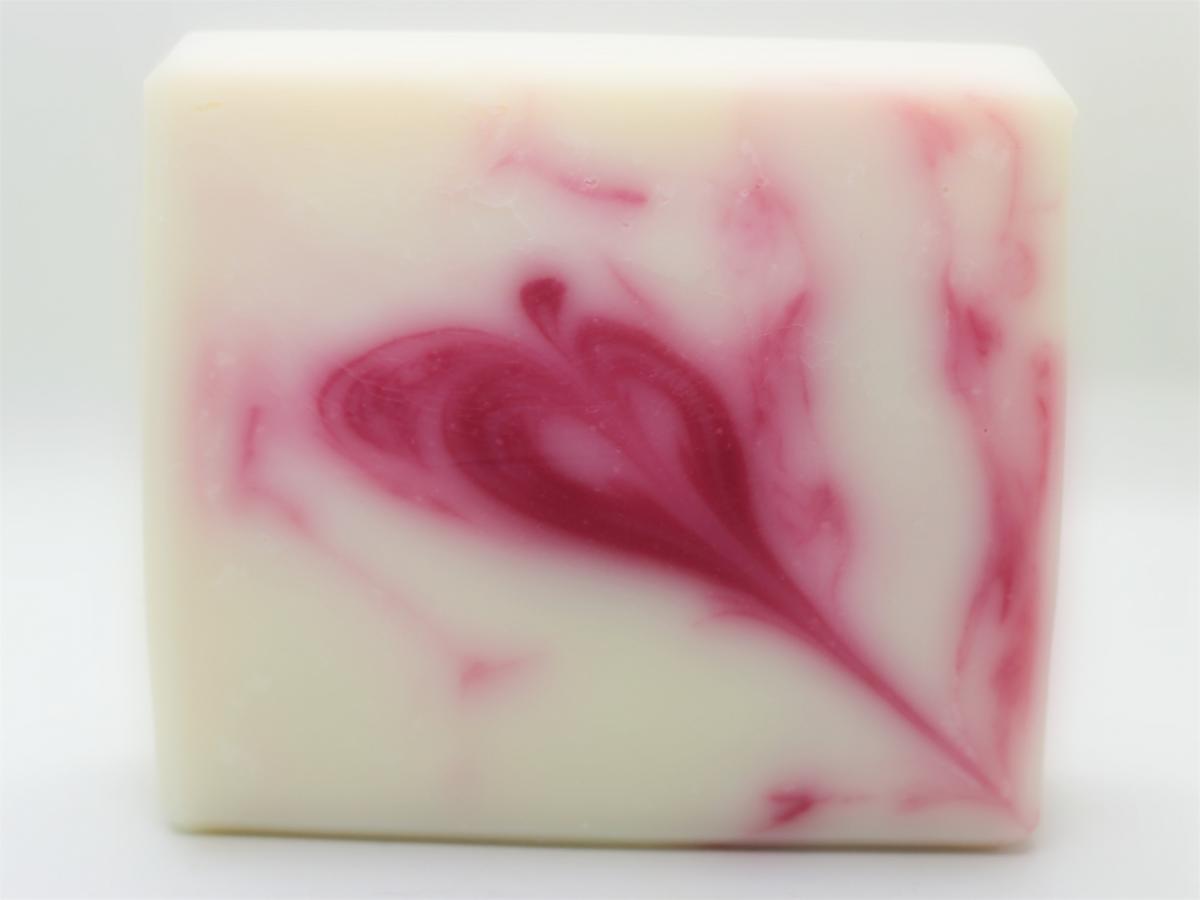 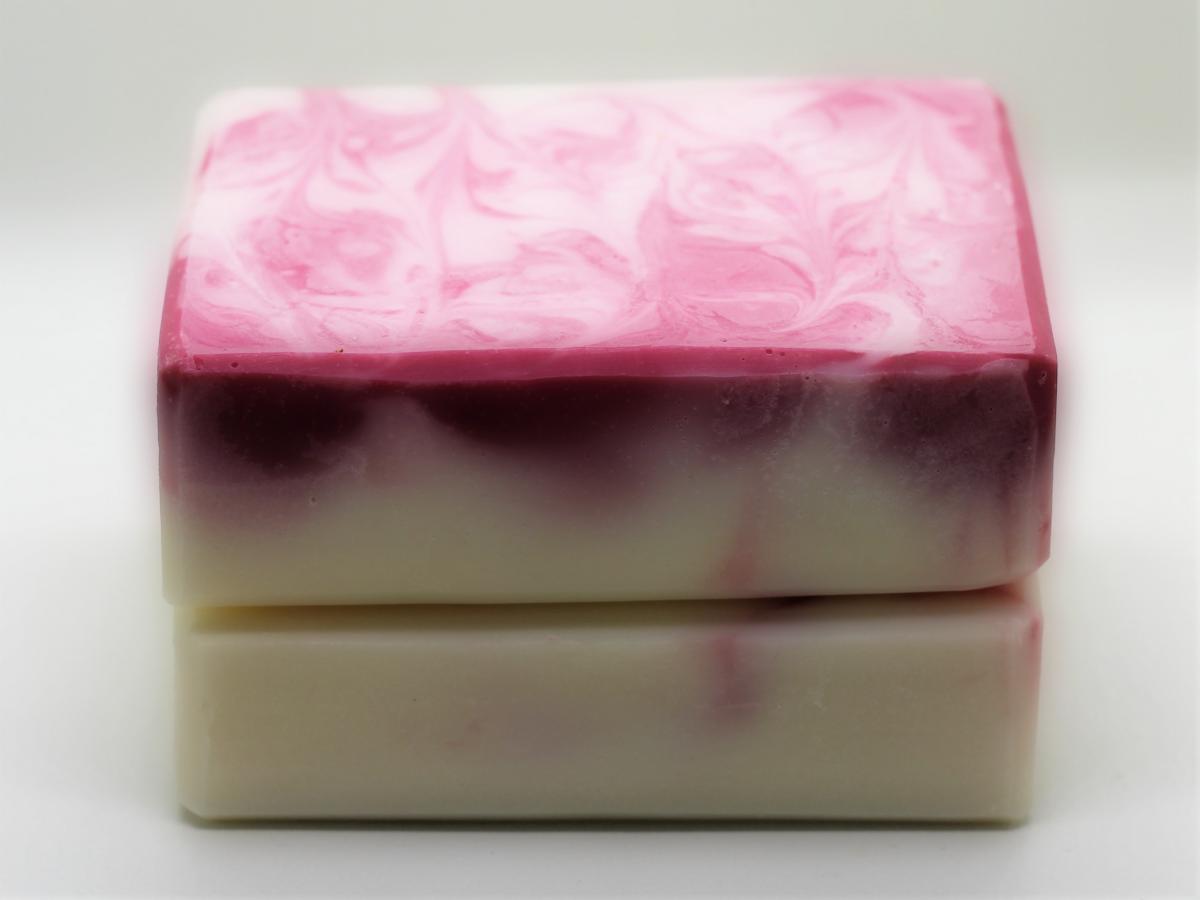 My entry is my second attempt. It was created in a loaf mould using a column pour. Tallow, olive, coconut, castor, mica and TD. Scented with BB love spell, of course! View attachment 27244 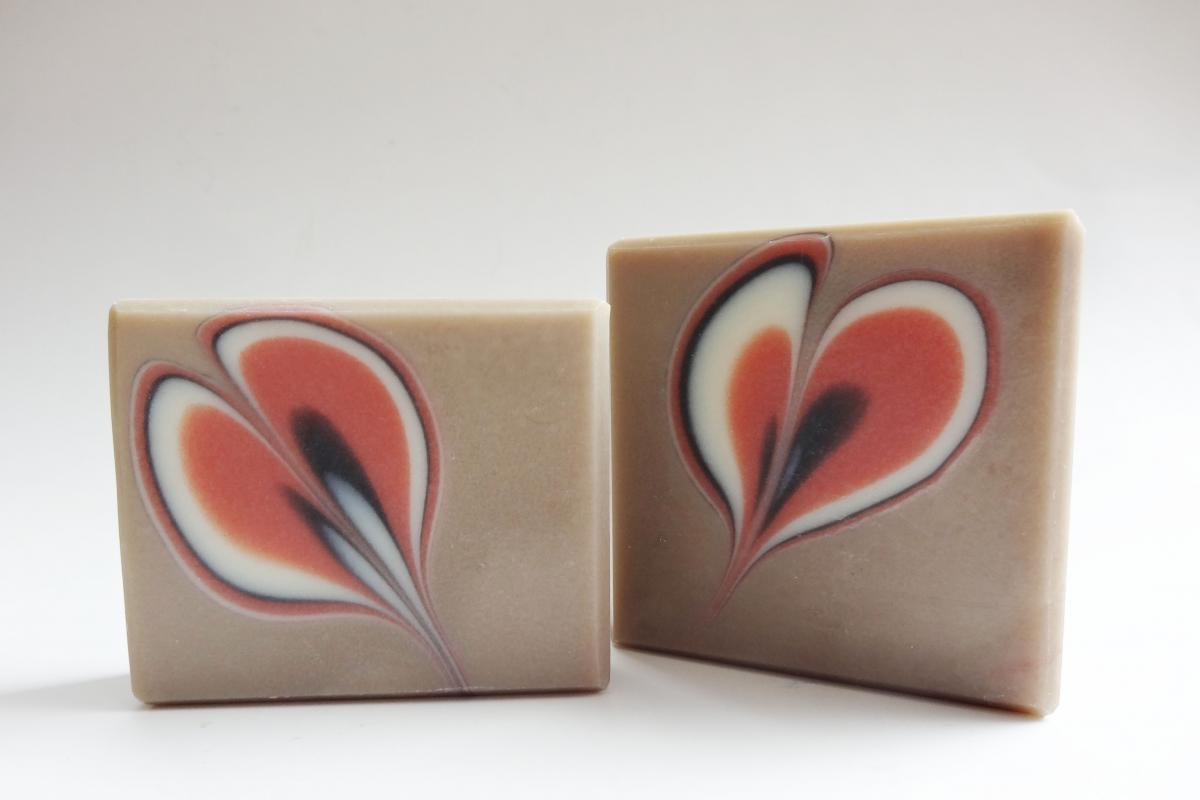 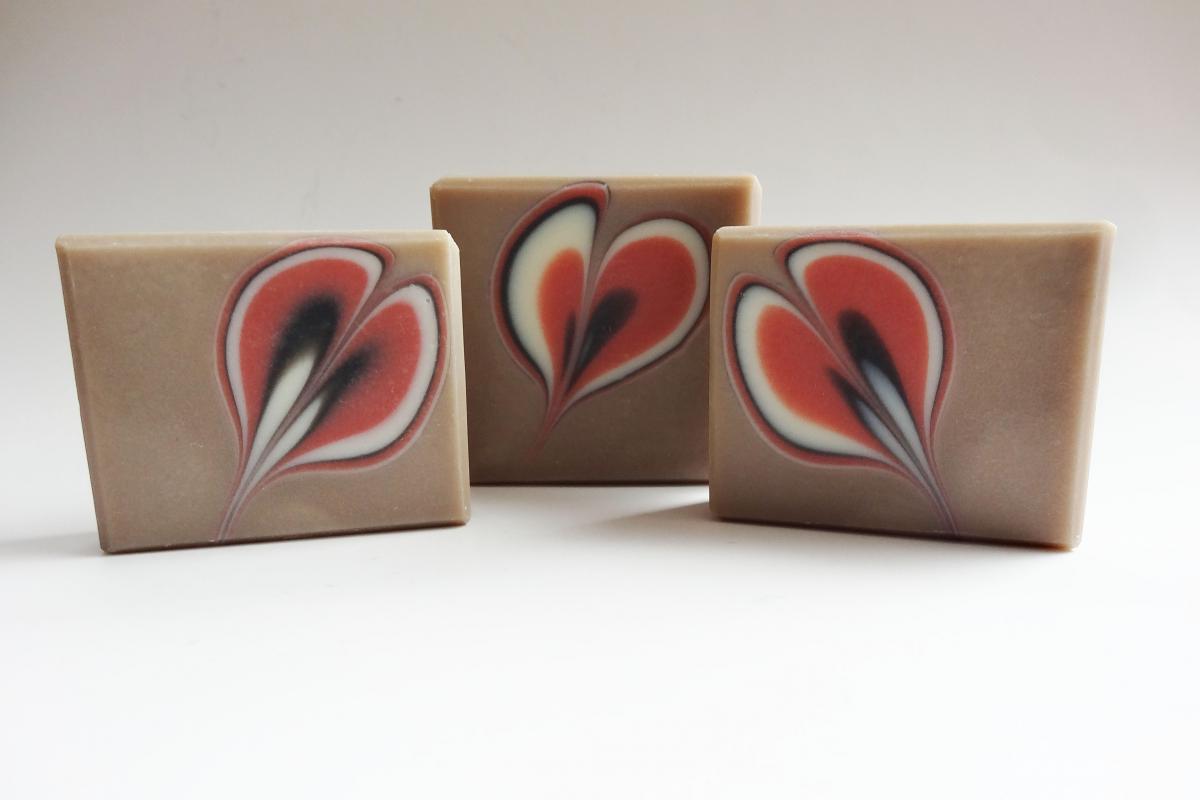 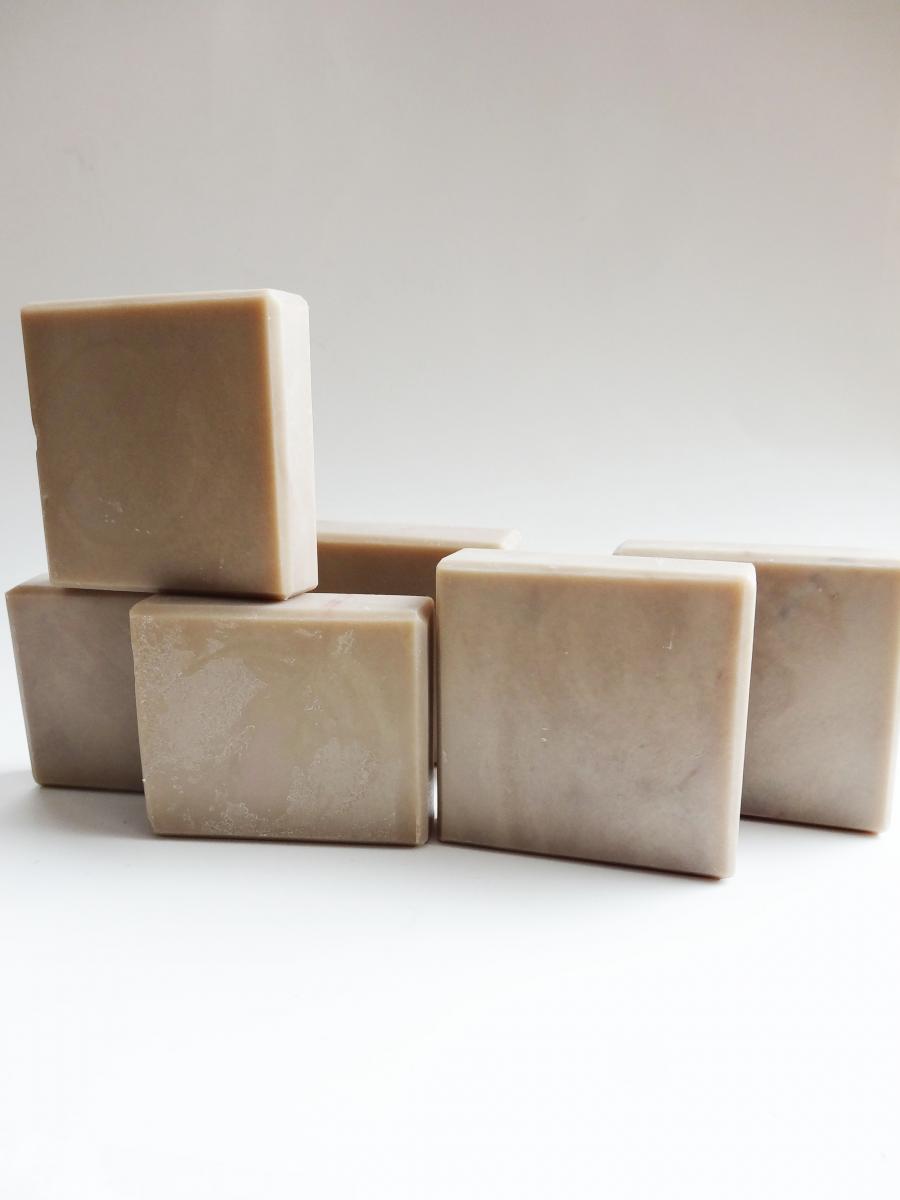 My Secret Hearts are fragranced with Brambleberry's Rustic Woods and Rum in the base, and Sweet Cakes Sandalwood in the colored portions. I used a slab mold and poured a layer of the base, then placed PVC pipe couplers for the colored hearts. I used the faux funnel pour for the colors with more of the surrounding base poured to the same height. After removing the couplers, I used the thick end of a plastic chopstick to drag through the rings of color, then topped with the remaining base color. The base color batter thickened up more than the batter for the hearts, which I think helped to hold the colors together after removing the couplers. I forgot to take a picture of the slab before it was cut, so have included a picture of the backs of the cut soaps showing that the hearts were hidden. Colors used were a small amount of Mocha Brown (Nurture) for the base, and Black Pearl, Winter White (Nurture) and Spicy Tomato (Mad Micas).
Last edited: Jan 31, 2018

OK, here goes nothing. I used an oval column mold cut from PVC and lined with melt and pour. I poured a CP base around an insert of rolled vellum and poured three different CP colors in the center column along with some M&P with gold glitter in it. I then dragged a dowel through it, attempting to add a heart. I used Angel FO and gold glitter (really pretty) from Crafter's Choice, glamour pink mica from Mica's and More, gold finger and disco pink mica from Madmicas.
When I mixed the FO into my oils it turned bright yellow and then, when pulling the dowel through to form the heart, the M&P had started to clump. I thought it was a total loss. I was relieved to find it had a heart! :angel:
I really had a lot of fun with this.
I'm callin this "Heart of Gold" 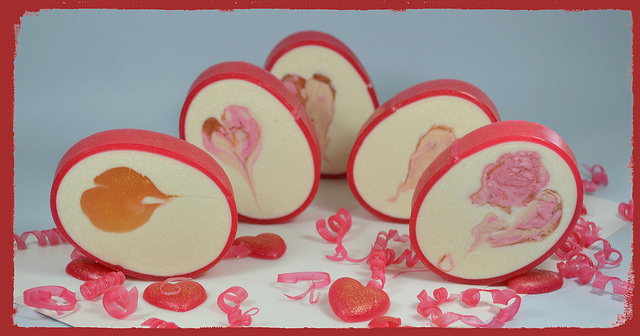 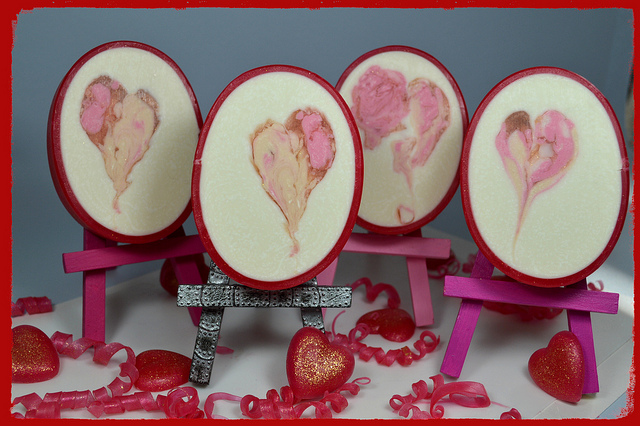 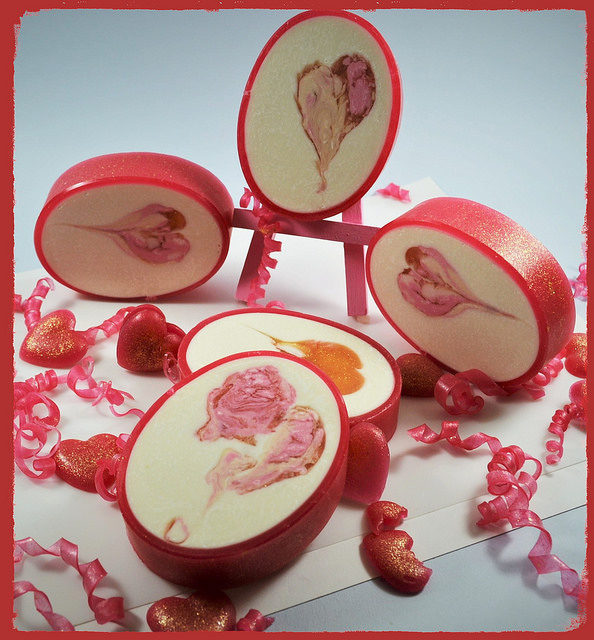 Mine turned out, erm, a bit abstract LOL. My batter wasn't tracing so I poured it very liquidy. It was an interesting learning experience and I'll definitely revisit this technique one day when the soap gremlins aren't around.

I enjoyed creating this design. It is a deceptively simple idea, yet it is surprisingly tough to do it well. Timing and boldness are important. I liked how the skewer swirled the threads of color through the heart and created a sense of movement and life.

Method: I made two in-the-pot swirls -- one mostly white for the inner tube that formed the heart and one mostly blue for the outside ring. After pouring the batter into both tubes, I carefully pulled the smaller tube out and made one swipe with the broad side of a metal shish-kebab skewer to form the heart. 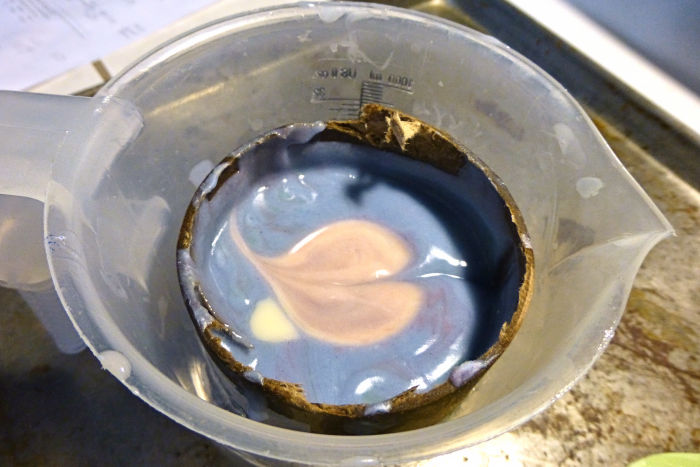 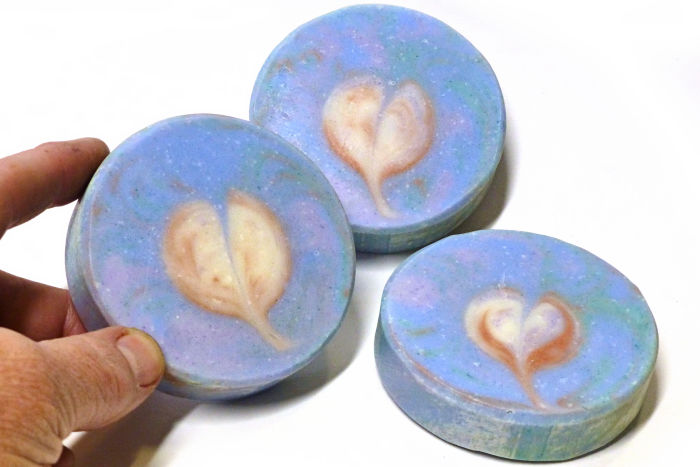 So here is my entry my second attempy chocolate and roses. Using slab mould

ETA: This is my first try, and I didn't have time to browse through the thread, I just watch the video, picture a visual color scheme and how can i do it, and just have my go.

I use squeeze bottle to pour the concentric circles, tape threads on my loaf mold to remind me where to use the chopstick. Because of the floral FO, I choose to use tons of liquid oils like olive, sunflower High oleic, safflower high oleic, etc. And I use 30% lye concentration, so I have to cut off part of the rough edge due to soft oils and high water. :headbanging:
Last edited: Jan 27, 2018
C

I'm really sorry guys and galaxyMLP, the tapatalk app. keep saying " I don't have permission to attach file on this forum." So I have to post like third times. Duh...
silly me. should have done it right the first time.
This is to show that it's hidden, and it's way before its time to cut. bwahahahaha!!!