Hubby and I walked down the aisle to say "I do". People said we were too young. True enough. People said it would be hard. Yes it is! But at the end of the day, it's worth it. Many times we could have thrown in the towel and parted ways but we stuck it out. No one else shares the memories we do. No one else can look at our children and remember that moment we held them in our arms for the first time and that funny thing he/she did when they were 5. That argument we had when they were 16 or the hair pulling when teaching them to drive. The worry when one of them was late coming home. The joy of watching them evolve from cranky child to happy, productive adult. Walking down their own aisle to say "I do". We're looking forward to the day we can hold our first grandchild in our arms and start the next cycle of watching them grow and evolve. We wanted to teach our children that marriage is important and not disposable. Only time will tell if they make it to their own 35 year anniversary!

When I walked into the kitchen this morning for my first cup of coffee, I expect to see a card. I didn't expect to see this bouquet of stolen flowers from the neighbor's yard and put into such a beautiful & costly vase.

I have to say I laughed my butt off! It's so like him to do the ordinary in such an un-ordinary way. Just one more tiny thing that adds to the thousands of tiny things, making a huge stew pot of reasons we're still together 35 years later! :razz: 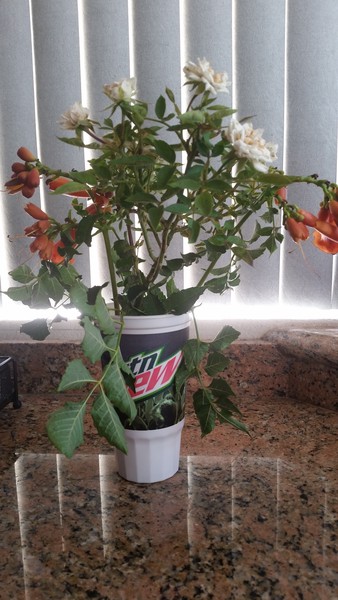 After so many years those flowers say he's a keeper! What a sweet gesture, and you know the "vase" and flowers don't matter, but the thought that he went out and got them himself - priceless. I hope you have a wonderful day, and many more happy anniversaries!
K

Thanks Dorymae! And it was a painful gesture at that, lol! He got stabbed by the rose thorns about a dozen times bring them in. We both did belly laughs over that too.

Congratulations! The image of him sneaking into the neighbor's yard is hysterical.

Congrats on 35 years!! I have made it to 32. Got married at 15. Not always easy not always hard. Would not trade a moment. May you have many many more

Location
Somewhere West of the Rockies

Congratulations!!! And my prayers for many, many more anniversaries ahead of you two!

Awww...congratulations on such a wonderful success! May you have 35 more, at least!

May you have another 35 years in happiness. Sweet!!!

Aww how sweet! Id rather have those kinds of flowers and vases ANY day. Congrats and wishes of many more to come!
M

I am so happy for you and for your wonderful husband. Showers of blessings for many more beautiful years together and thank you for sharing your lovely story!
L

Congratulations on 35 years together! Your hubby sounds like a sweet, thoughtful guy that loves you very much.