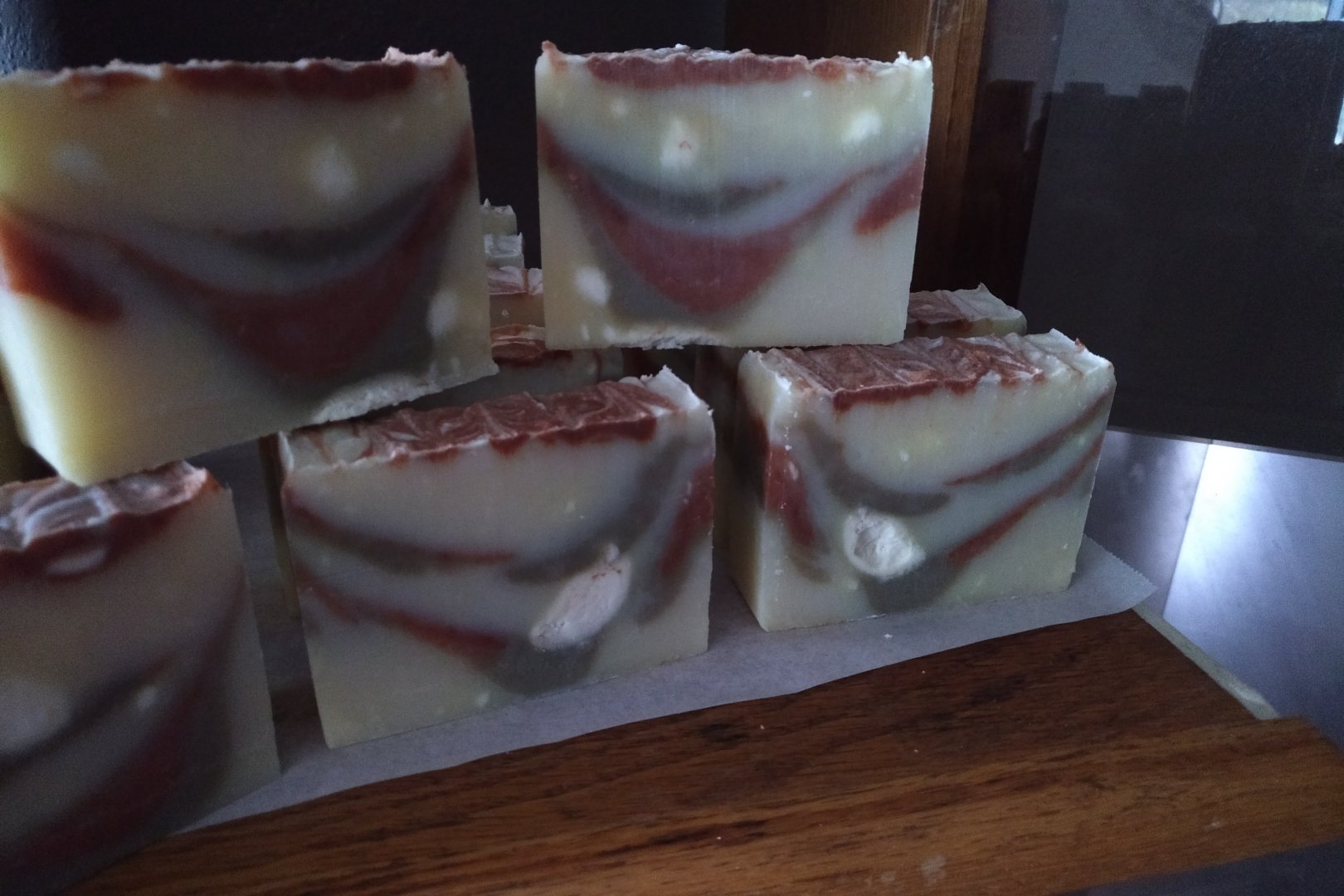 What do you think these white blobs are in my soap? There goes my idea of soap as Christmas presents!

The butters and lye mixture were melted when I mixed them both together at about 45C. I noticed when I mixed the lye and butter with my hand blender, it quickly thickened in some spots. I also put the water for lye in the fridge first before adding the lye in hoping that I wouldn't need to wait as long for the lye solution to cool. I had another soap with smaller white blobs where I also used cold liquid (coconut milk) before I mixed the lye. Could this be the issue? I thought I was supposed to freeze milks before adding lye in...

My recipe has stearic acid at 9 and palmitic at 17.

Thanks for any help!
F

Hi just a newbie myself. Very nice design.
First impressions are undisovled pockets of lye. But those are quite large. Have you zAp tested it yet?? Another thought, unmelted clumps of butter's. Were all your fluids clear. Lye solution and melted oils? When you say "butters and lye" were mixed. You mean "butters along with other oils". Were mixed with lye??

I've had similar looking patches with fragrance oils that weren't properly mixed in. Do they look oily?

I left mine to cure and the oils absorbed into the soap and it was safe to use, but the patches didn't disappear.

I think it is still lovely soap!

What was your total lye mixture amount and total oil weight? I've used a very similar recipe without any problems -- except I don't have experience with clays.

Did you first mix and melt all your oils & butters completely so that it was a clear fluid? And then add the lye? I'm just wondering if all your solid oils and butters melted completely.

Please list your COMPLETE recipe. The amount of NaOH (and KOH, if you used it- yes some do use dual lye in bar soap), the amount of water, any and all other additives (you only mention 2 clays) AND your method. How long was the lye solution in the refrigerator? How cold did it get? What was your lye concentration or water:lye ratio? All these things matter.

From your photo, those spots do not look like lye pockets to me, but they do look very dry & possibly flaky. Either way I would do a zap test on them. CAUTION when doing a zap test. Follow the instructions here & NEVER put your tongue on a suspect spot in soap.

For reference, this link here is what a large solid lye rock looks like in soap I made with partially frozen lye solution. It's a blurry picture, but I cannot find a clear picture of that soap. It really looked a lot like a crystal rock inside of my soap and it was solid to the touch like a rock, using a gloved finger, of course. This link describes how I ended up with the solid rock of lye crystal in that soap.
R

Thanks for all the responses!

Thanks for the compliment, Ford! My friend said I can tell people they're snowballs hahahaha. Yes, the oils/butters and lye were clear when I mixed them together.

The white patches don't seem to be oily. They kind of look like shea butter. I used peppermint essential oil, but I did notice the packaging said 100% essential oil mixed with natural oils. It didn't list what the other natural oils were though.

Yes, I only used two clays as additives, plus peppermint essential oil (15ml). I just eyeballed the clay amounts until I liked the color. I put the water for lye in the fridge overnight. I wonder if that's the problem? The lye water was clear when I mixed it in with the oils though at 45C. I only put the water for the lye in the fridge overnight hoping I wouldn't have to wait so long for the lye solution to cool down.

Thanks for all your help!
F

You could mix lye solution the night before. I have just started doing this. Like master batching sought of. What I was doing prior, is freeze water. And mix lye with a combo of mostly ice and a little liquid to top it of. I found ice cubes instead of one lump. Worked best for me. YMMV

First off, I'd say you have too much water for a CP soap, but that doesn't address the issue.

So I think what you have is a mix of Palm/CO/Shea in those globs. Which also means that the other parts of your soap MAY BE lye heavy, as the globs are not saponified oils, but plain old hard oils.

I highly recommend you do the Zap Tests I linked above to test the actual soap parts of your soap. If you get a zap, the soap is not safe for use as is.
R

Okay, so it looks like it's fine to use cold fridge water for mixing the lye, and it heats as per usual.

I'm not sure what happened with my soap then. I tried the zap test and didn't feel anything. Carlene, you said your tongue took a week to heal. Mine tasted bad but there wasn't a sensation. I wonder if mine was a false trace? But I hand mixed the clay in after and it was pretty thick by then.

I put my distilled water in the fridge overnight. When I added the lye in, everything was clear and dissolved, and I waited until the solution was 45 C before I mixed it in with my butters/oils, which were also 45 C and clear.

Sugar and Aloe and Sorbitol?
2

A
my lye solution hardened