I have tried to make soap in silicone cupcake molds.
I used two different types of molds, and got the same problem with both types.
I guess it is something with the silicone.

Have tried the same recipe in plastic molds, with less problems.
Are there a difference between different silicone types?

I tried CPOP, and am not sure what could be done different.
The soaps look like they have been attacked by small worms.
Oil from these holes floated on top.
Have done the zap test, and they tasted....soap.

I like my soaps to go through gel.
If I reduce water, will it be harder to get the gel process, and what temperature is the ideal?
Last edited: Aug 5, 2016
D

Post a pic? Some people get a lot of bubbles with their silicone molds. I rarely have that problem, and I don't see a common denominator between those that do or don't. Recipe? FO?
S

I get bubbles/holes with thin silicone molds that I do not get with my loaf mold. I gel my soaps, normally, but if I CPOP, I get bubbles on every surface that touches the silicone no matter which molds.
B 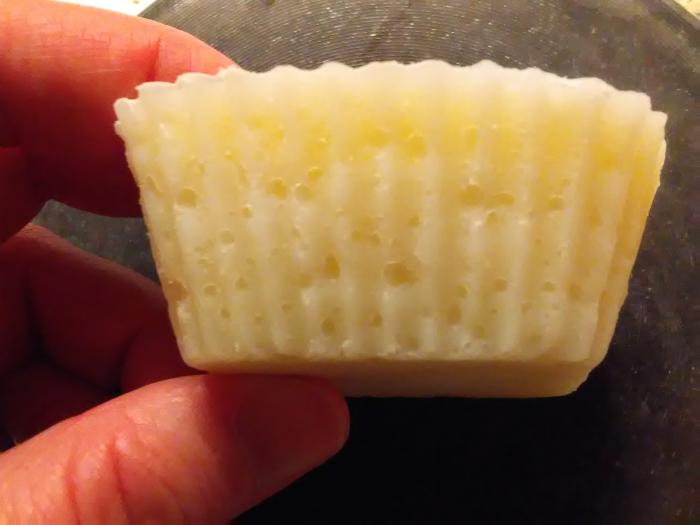 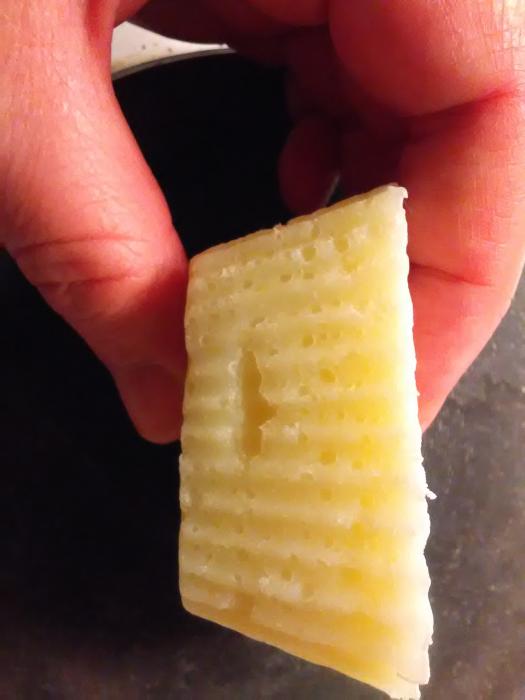 I understand your frustration, but I think they look more like real cupcakes with the holes!
B

I've eaten soap once as a child. Never again.

To the serious part. If CPOP is not a good solution,
how do I get my soaps through gel?
The climate here is not the warmest....

You may be getting a lot of bubbles using a stick blender. I tap my stick blender in the bottom of my mixing container to burb the air bubbles trapped under the blender bell. I blend to just a thin trace and then pour. I also line my silicone muffin molds with coated cupcake liners and tap the muffin mold lightly on a solid surface right after pouring, being careful not to splash the soap batter. If bubbles come to the top, I spray with alcohol.
S

Brynhilde said:
Are there a difference between different silicone types?
Click to expand...

Based on my experience with few different silicone molds, the same recipe poured at the same time and treated the same way can come out perfect or have minor ricing to serious chicken pox. The chicken pox can be on the surface or extend throughout. My suggestion is to use a mold that you line with freezer paper.

I only us silicone. I've used silicone cupcake liners and CPOP them with no issues. I think they may be air bubbles from stick blending. The only time I had holes was from acceleration and having to plop the batter in.
S

I only get that result from CPOP in silicone. Nothing else. Same stickblending techniques every time.
B

I am sure the problem was not the stick blender this time.
The bubbles leaked oil. I just wiped the worst excess off, and cured them.
G

I'm convinced it's a heat transfer issue. I have never had the wormholes with my Crafter's Choice 2 lb loaf mold, or my Brambleberry 1 lb loaf mold when CPOPed, but I get the wormholes every time in two different cupcake molds and a thin walled bread mold that I have. I CPOP at 175°F since that's as cool as my oven goes.

I'm not 100% sure if it's the heating up or cooling down that causes it(or if it causes it at all, I'm just giving my hypothesis). But I think it's the heating. My reasoning for that is that some people leave their soap in the oven overnight after turning the oven off and still have wormholes. That cool down is going to be very slow and gradual. So I'm thinking the quick heat up somehow causes the wormholes.

I believe there are two things going on.

2) The cupcake molds are quite small compared to a loaf mold. So there is much less thermal mass. The smaller mass will heat up much quicker than the larger mass in a loaf mold. When I got the wormholing in the bread mold, I only filled it about an inch deep, so not much mass in that one either. I have never tried CPOPing that mold when filled full, that we be a good experiment.

Feel free to flush my theory down the toilet, but that's the best explanation I've got.

It could be happening because you are CPOPing too hot. If you heat the oven to 100*F and then turn it off and put the wrapped soap in and don't open the oven for twelve hours then, you shouldn't have a problem.

That could be. I have read many times to CPOP with an oven that is pre-heated to 170F, then turn the oven off. That is the method I followed.

Susie said:
That could be. I have read many times to CPOP with an oven that is pre-heated to 170F, then turn the oven off. That is the method I followed.
Click to expand...

I know! I did that once and cooked my soap and had to throw it out!
I CPOP at 100*C and haven't had a problem. I think the trick at low temps is not to open the oven to check it.

Susie said:
I only get that result from CPOP in silicone. Nothing else. Same stickblending techniques every time.
Click to expand...

Me too. Conversely, without the oven the small bars in silicone won't gel. I'm considering making a negative insulating box from expanding foam, but haven't gotten around to it.
...

Susie said:
That could be. I have read many times to CPOP with an oven that is pre-heated to 170F, then turn the oven off. That is the method I followed.
Click to expand...

I suspect that recommendation is best for bigger molds because their larger mass keeps them from getting as hot. For small bars, it's much easier to overheat them.

BrewerGeorge said:
Me too. Conversely, without the oven the small bars in silicone won't gel. I'm considering making a negative insulating box from expanding foam, but haven't gotten around to it.
...
.
Click to expand...

George, just an idea for you, I use a small styrofoam cooler to get my individual silicone molds to gel. I do also heat up one of those microwave reheatable handwarmer thingies to give them a little boost. Works great for me.

navigator9 said:
I do also heat up one of those microwave reheatable handwarmer thingies to give them a little boost. Works great for me.
Click to expand...

This is what I do when I want my small mold or my cavity mold to gel. You can make the warmers any size or shape you want. It's just a fabric bag with uncooked rice inside.
N

Yep, too much heat with the silicone. I use a heating pad on low under my soap and wrap the whole thing in a blanket. It can take a while to get warm enough to trigger gel but it's better than the bubbles and the oily mess from soap getting too hot in gel.

I love my bed buddies, as we call them, the rice-filled tubes. I make mats that are about 16x20 that have squares filled with rice... a couple minutes in the microwave and they are so so lovely at the bottom of the bed in winter. And an excellent idea for adding some warmth to a mold.

T
Bubbles? Silicone Rash? What are these white spots?

A
Soap not harden in mold