So.. I made this recipe this morning and just wanted to get on here and share my experience in case anyone else is interested in making their own MP soap base. I think this will become a bit of a journey so might be good to document my troubles
I chose this recipe because I can't use my gas oven to HP this soap since it requires ethanol which is flammable. I don't have a crock pot and they're hard to come by here so that's also not an option and I tried a similar recipe au bain marie on a hot plate, but that didn't work out at all (couldn't get the temp high enough). High temp HP seems like the only way to approach this relatively safely and I've been wanting to check out the ultimate guide to HP soap, because I have some very mixed feelings about them.

(RANTALERT! You can just scroll down and read on after end rant) On the one hand they seem like they're very committed to delivering a great product that looks really awesome and it sounds like they did a lot of research. One thing I really liked about this recipe for example is that it has only the minimum of water that's necessary for dissolving the lye and sorbitol (or in my case sugar), which seems to make a lot of sense in a recipe which already contains so much liquid in the form of solvents. They also give exact temperatures that the solvents need to be when added to the soap. On the other hand, I read on their website that they claim that HP soap needs a shorter cure than CP, which is absolutely not true and it really annoys me when people say that. Also, they seem to advertise high temp HP as being THE way to make pretty, fluid HP, which I think is not true. I've been able to make very fluid HP with very low temp methods without a problem. Also, making a book for beginners and advertising high temp HP (which is not without risk, since you're actively promoting your soap to volcano) just doesn't seem right to me. I don't really have anything against the technique (I've tried it before out of curiosity), but it really shouldn't be set as an end goal for beginners. (END RANT)

This recipe was advertised as an easy 10min project. I found it to be quite advanced which is logical, since making MP base from scratch is an advanced technique (they do advise reading their HP book first). I guess they meant that this is a relatively easy recipe as far as MP from scratch goes, It's not an easy recipe compared to regular CP/HP soapmaking.

It also took me way longer than 10 minutes. Weighing everything alone was like 30. But I guess it'll get faster with experience. My soap cooled down too much somewhere halfway through and it took me a while to figure out I just had to put it in the microwave for a few seconds (duh), which lengthened the process as well. I think altogether I spent +-1.5 hours on this.

It also didn't turn out as clear as shown in the pictures and video. Not really sure what went wrong there. I'll probably try a few more times and see if I get better. I saw a small bit of undissolved lye in the bottom of my jug after pouring it out, so maybe my soap has a slight superfat. Or maybe it cooled down too much in between. The soaping 101 video (which is a very, very similar recipe, only big difference is she uses a crock pot) says to keep everything at or above 200F/100C at any time during the process.

The soap is remeltable (yay!) And actually works with food coloring. I'll probably bring some to my neighbor's kids to play with now all the schools are closed.
Here's a pic of my very first MP soap: 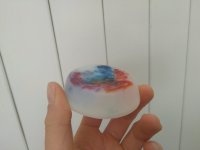 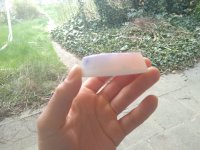 So lots of things left to learn!

The soap is also really quite nice to use. It has a typical high CO lather (quite fluffy), it washes squeeky clean, but it's not drying. It does feel very different to my cp soap, but I'm guessing that's normal for MP.

I tried again yesterday evening. Same recipe (though only half) but I made sure not to make the same mistakes as last time: I made absolutely sure all my lye was completely dissolved and I kept the temps of my soap high by popping it in the microwave whenever the temps dropped too much. I needed to do this a lot, because I was only using half the recipe in the same pitcher and it lost heat quickly.
It took me +-1,5 hours again. 30 for measuring, 45 for making the soap and 15 for cleaning up.
I did have one problem, while cooking the soap it seemed like some liquid was seeping out and it didn't want to saponify. I heated it up in the microwave several times and dit 2 very positive zap tests (didn't dare try to do a third one because my tongue was too painful from the first 2). Once I thought I recognized gel phase and decided it would probably be cooked enough, so I added the alcohol.
In the end I had a very transparent batter which seemed to stay transparent while hardening out, except at the very last moment it turned opaque anyway, which was very disappointing. I think it might actually be more opaque than my first try and this time I don't know what I can do to make it better next time.
Has anyone tried this (or a similar) recipe before? And what is your experience? Any tips on what I should do differently next time?

Interesting. I've always wanted to try my hand at making an MP base but right now, literally and generally, I just can't. Maybe one day, when my brain is less broken, I can try my hand at it. If TOMH popped up, he'd have some pointers somewhere.

Still don't know why my base turned out opaque, so haven't tried another batch, but I experimented a bit with coloring: 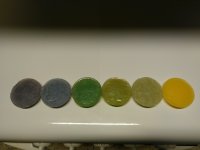 Thanks for sharing. It's been really helpful.
How long does the homemade M&P soap last (after it's been made, cured, reheated, scents added, colours added etc...) compared to store bought M&P and CP?

I'm new to CP and having loads of problems, eventhough I'm following recipes and instructions and wondering if I should go back to M&P but making my own base.

Vickyn said:
Thanks for sharing. It's been really helpful.
How long does the homemade M&P soap last (after it's been made, cured, reheated, scents added, colours added etc...) compared to store bought M&P and CP?

I'm new to CP and having loads of problems, eventhough I'm following recipes and instructions and wondering if I should go back to M&P but making my own base.
Click to expand...

szaza said:
I've never used store bought, so I don't know how it compares.. it doesn't seem to last as long as cp, but I think store bought doesn't either.
Making your own MP is very advanced. Make sure you have mastered HP soapmaking before you attempt making your own MP!
Click to expand...

Ah ok thanks for the advice. No, you're right the store bought doesn't last long. About 4-6 weeks if you keep it covered, but I'll look into HP first.

Today I came back to this MP and tried how it would perform when pouring one color into the other. To my delight, the colors barely muddled and I got a nice blue spiral. 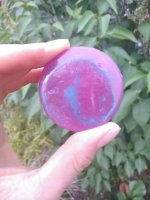 The blue dropped a bit into the red, but not everywhere and the color distinction stays intact. 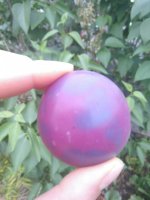 I also tried to wash with it again, the lather's a lot more creamy than it was before. I tried to take a picture, but some bubbles had popped by the time I got my camera ready 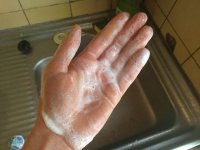 I poured at +- 65°C.
Soap was left in open air to cure since I made it in march (though general consensus seems to be MP should be stored sealed in plastic)
The outer edges of the soap block were a bit harder than the centre, but I'm not seeing much warping (neither in the original block nor in the soaps I made with it). I'm also not seeing any sweating, but the air has been rather dry these weeks.

Eta: what I am seeing on the air cured MP is some white crystal coating. My guess would be those are sugar crystals.

Szaza, not sure if you're still having fun experimenting, but you might take a look at the recipe and method in this video. It uses a double boiler to reach and maintain heat and it makes a bar somewhere between transparent and translucent. Not sure how she arrived at the double boiler, but it makes a lot of sense to me, even if it's perhaps not useful for a large batch of soap.


I have some of the same concerns about the Ultimate HP folk and purchasing the book, but I won't go into them here. However, perhaps this other version of theirs, which produces a translucent bar, would be of interest. Fewer ingredients, though there are still the challenges of keeping the recipe at the proper temp, and that the "10 minute" claim obviously only pertains to mixing time. Also, a word of caution: When I do the lye calc, the recipe in the presentation is a 25% lye discount. I find that it makes a beautiful translucent base, but if you proceed with the recipe as written, there will be a film of oil surrounding your soap when you unmold it. So - the lye amount must be a typo. Anywho - Before you proceed, I'd suggest running the recipe through any lye calculator (not sure why, but I can't remove the link to the soaping friend calculator...sorry) using your typically preferred super fat to get the correct amount of lye. Here's the video link.

@szaza have you tried asking your questions in their HP-LS Facebook group? They are normally pretty responsive and helpful there. They also provide an email address for “students”, i.e., book buyers to email them directly for support.

I second the double boiler method, as well. Much easier to maintain an even temp with that, as opposed to constant microwaving.

I’m surprised to hear that there were any implications that HP needs less cure time. That group really bangs the drum about the need for curing, often with a link to one of their blog posts that goes into the science. They do admit that HP is safe to use right away, but have always followed up with the need to cure it, despite all the myths out there.

Let us know if you’ve tried this again or had any success.

I'm very low on soaping time (and juice) lately so I haven't really gone on experimenting with this.
I joined a MP base makers facebook group and bought the ingredients for a recipe hailed by most on there, but haven't had the time to do it yet.
There seems to be some genuine debate on whether or not home made MP needs cure time and how long (something about the solvents if I undersood correctly)
I hope to come back to this one day, but it won't be for the next 6 months... 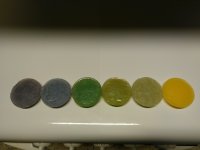 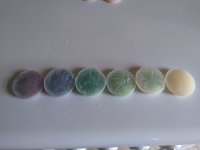 I'm surprised annatto faded so much, while alkanet still holds color. The rest seems to behave as expected. I kept them stacked on top of each other, so annatto might have gotten more light exposure than the rest.

T
not sure if my soap has too much oil