Hi all,
So I found a recipe that is kinda like the laundry sauce one one the Internet, but with your own coconut 0 sf made soap. I have read that coconut oil adds soap scum and should not be used for laundry, I have also heard the opposite. I do have a he machine and will only use liquids, does anyone use anything like this? It is basicly the soap, washing soda, borax or baking soda and 6 cups h2o. Any tips? Thoughts, favorite soap to use if not coconut?
Also when I make the coconut oil soap must I wait 6 weeks cure before grating?
H

I use my beautiful He whirpool with home made detergent. CO 0 SF with borax and washing soda. We have threads about it. I can not link you now being in work on s****y computer. I use my soap for over 3 years nothing happening with the washer or the clothes

I use "the sauce"... but I didn't have good luck with my CO soap...I can't really say what exactly, but my clothes didn't feel the same or smell the same as when I use Fels. I use my CO soap as a stain stick, and it works very well for that.

Why use only liquid detergent? I have an HE machine, use my 100% 0% SF HP coconut oil soap with borax and washing soda. I put vinegar in the fabric softener cup, and my (incredibly grubby) clothes get nice and clean with warm water. Sometimes I use a CO stain stick or oxyclean too.

I don't feel the need to cure my laundry soap more than a week or two. And I like that powder is concentrated and I only need to use 2 Tbsp per load.
I

Seawolfie, I don't like powered too much. It seems to not disolve well for me. Maybe hard water?

Irishgem, I have hard water as well. Enough that I need to add vinegar to my water bath canning water, or I get hard water deposits on the jars. I use 2 parts grated soap to 1 part borax and 1 part washing soda (by volume). The borax and wasing soda seem to overcome the hard water issue.

I have a hard water too, I mix the detergent (co soap and borax and washing soda ) with milk frotter) Vinegar in the softener compartement

How much vinegar do you guys use?

boyago said:
How much vinegar do you guys use?
Click to expand...

You know the cup that's for the fabric softener? I put white vinegar in that up to the line
H

I put white vinegar in the Downey ball. And I used to use two bars of fels naptha and one cup borax and one cup washing soda. Now I'm hoping to use two bars of my own coconut oil soap. I used to melt it all down like the sauce recipe but then I started just grating the fels then adding the powders then running it through the blender to finely mix. And still use the same 2-3 tbsp
I

Does the coconut oils soap you make for it have to cure the 6 weeks before grating or can you do it the next day like some do for rebatching?

U have to grate it as soon as you take it out of the mold, I do it in like two days. It gets hard as a rock)
I

So I made some laundry sauce with some lard/ coconut oil I had cured just to try and went ahead and used this recipe for coconut oil soap for laundry/ stain stick. I soaped around 90-100 and it only came to a thin trace. I sb for about 20 minutes but it never got any thicker. I dont remember this happening with my other coconut oil soaps. Is it due to the lower temp? It poured like a creamed soup, not the thick kind.
Last edited: May 2, 2015
H

My 100% co soap took a really long time to trace as well. I didn't keep the time but it was so long. And I remember thinking, I hope it's thick enough to pour. And it was. But man it took a long time
I

YES! It took forever and did not seem thick enough but I was able to make soap! It heated as I insulated and is now cut. I didn't wait till completely cool because it can be so hard to cut and it only partially gelled but it's just for laundry anyway. I'm so glad it worked. 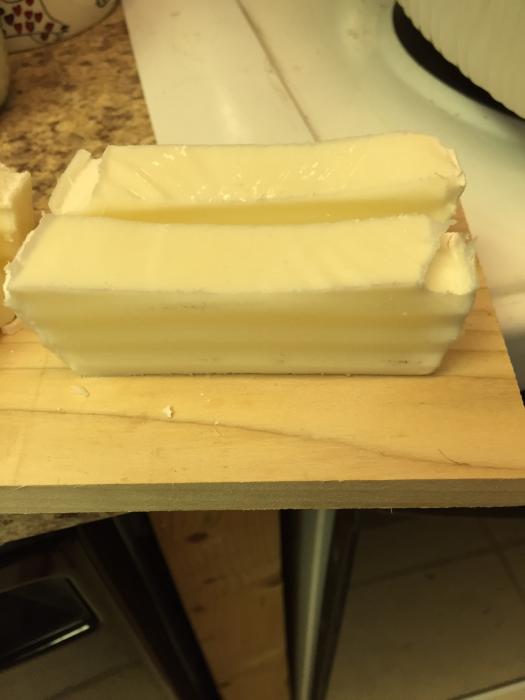 Here is what I dont understand about the benefits of the laundry sauce thing (if we are talking about a recipe like this one: http://www.budget101.com/myo-household-items/moms-super-laundry-sauce-3993.html )

If we guess and say that the dry recipe (2 cups grated CO soap + 1 cup washing soda + 1 cup Borax) has the same amount of soap, washing soda and borax (1 bar fels naptha + 1 cup washing soda + 1 cup borax), then the laundry sauce is diluted quite a bit with 3 cups hot water and again what looks like 3 more cups of water, right? So why does the laundry sauce instructions say to use only 1 TBSP of their goop where I use 1-2 TBSP of my dry powder which is at least twice as concentrated (call it 4 cups dry to 10 cups wet per recipe)? By that calculation, when I use 2 TBSP of my laundry powder it is 4 times more potent than the laundry sauce. Which is ok, I have a disgusting job sometimes, and we manage to get our clothes much dirtier than many. For that reason, and my husbands skin sensitivities we do also use a second rinse (on an HE machine thats only about 1 extra gallon of water).

I thought Borax lost potency when mixed with water? Or was it washing soda? I thought one of them loses something if it gets wet? I could be wrong there.

And if you want liquid laundry soap, why not just make 100% CO 0%SF liquid soap? At least you can put it in the drawer of the dispenser then. I haven't yet because I'm still suspicious that Borax or washing soda isn't supposed to be mixed with water until you want to use it.

EDIT TO ADD: By chance I needed to grind up some laundry soap just now and realized some discrepancies in my assumptions. If I grind up 5.5 oz of my CO soap (a bar of Fels Naptha is about that), I get 6 cups of fluffy flakes. To that I would add 3 cups Borax and 3 cups washing soda, whereas the Laundry Sauce recipe would only use 1 cup each of Borax and Washing soda. So I have less soap and more borax and washing soda in my recipe - which may be why I don't have problems with it dissolving or anything, and why I use 1- 2 TBSP of it per load.
Last edited: May 2, 2015
H

That seems like a lot of borax and washing soda. I agree that the wet version described on budget101 would be less concentrated because of the water. I used to make that recipe as well. Then I just got lazy and did the powder way. I used to only use one bar, but I have a compulsive habit of needing to add extra laundry soap, of any kind. That's when I decided to use 2 bars of fels instead of one. No science here. Just my way of limiting myself to 2tbsp max. But really, were the clothes just as clean with only one fels bar? Probably. Lol

Well, as an experiment I'm trying 3:1:1 soap:borax:washing soda today to see if i can tell the difference.
I

I thought the math through myself seawolfie. But I have no desire to make the liquid 50 gallon sludge recipies that I keep seeing everywhere and this has much less water so in reality it is more concentrated than the 50 gal bucket stuff ( I'm sure it's not 50 gallons but it's more than I care to store or make). I have never made a real liquid soap except this, and I'm not sure it really qualifys as that. I may play around with the general idea of the recipe and work the ratios a bit. I used 6 oz lard and co soap, 6 cups water and 1 cup each soad and borax. I noticed after that it states to use 1 cup in normal wash with washing soda so that's when I statred thinking it may not be very strong. We will see. Bottom line I had fun making "stuff" as my husband calls all my projects, and it only cost me about 1$. I'll report back in cleansing. Your recipe is nice but I have never had good luck with powder. It just never seems to disolve for me but maybe tomorrow I'll whip up some and try on my stinky towels

How to Use a Laundry Bar?
2