Help !!!
I can't get this anywhere at the moment and getting this from ebay would cost me $100+ which is crazy..what can I do to my soap to prevent the ash forming. Thanks

Embrace the ash. Seriously. On some soaps, it actually adds a bit of charm. If you really want to get rid of it, steam your soap. I've been making soaps for a few years and never use alcohol to deter ash.

Misschief said:
Embrace the ash. Seriously. On some soaps, it actually adds a bit of charm. If you really want to get rid of it, steam your soap. I've been making soaps for a few years and never use alcohol to deter ash.
Click to expand...

If you use a 33% lye concentration or higher (less water to lye), gel your soap, and don't unmold until the soap is completely cool, there is way much less of a chance for ash to form. That's what I do and it's very rare that my soaps ever ash, and I don't use any alcohol. I just cover my mold with its normal mold cover, or plastic wrap if it doesn't have an accompanying cover. Of the rare batches that do get ash (mostly because I unmolded too soon), it's just a light dusting that comes right off with a damp cloth.

I do as IrishLass recommends. I rarely get ash.

I do the same as Irish lass (thank you Irish Lass). If you don’t have a wooden mold with a lid use plastic wrap over your mole for quite a few days to avoid ash.

I used to use IPAlcohol but if you use too much it does strange things to your soap so Irish Lass’ method is easier.

I simply do not worry about ash.

Yeah I don't worry about it. Soap is made for cleaning and once you use it, the ash will be gone.

I force gel and use a tighter water:lye ratio.

I have uncovered too soon on occasion (too eager to slice!) and the ash started appearing in the first 5-10 mins. I find spraying again with alcohol and covering up can often stop it in it's tracks.
If you do end up with ash and absolutely want to remove it, you can "wash" your soap. I find this works best if you leave it in the mold or liner and run water over the top only, then let dry before unmolding.
Here's a video from Valerie of Raven Song Soap: https://www.instagram.com/p/B7JlQp4AROE/

There are times when I encourage soda ash for certain designs, like to accent snow inspired creations. It's fun to embrace it, especially when you know how to control it. Certain additives and scents will encourage it more than others. I sometimes find that when I make soaps with activated charcoal and lavender essential oil (together) ash often appears well into curing (4-6 weeks). A quick wipe with paper town moistened with isopropyl takes care of it.

Alcohol never helped with my ash problem. So far the most effective method I had was to gel and cover. I usually cover the mold with plastic wrap after soaping. CPOP also helps a bit.

Soda ash (sodium carbonate, washing soda, Na2CO3) is probably the most common form of "ash". Soda ash is a white powder or tiny crystals that form on the top and sides of the soap bar. This ash can feel powdery or even slightly rough to the touch. Soda ash is not very soluble in alcohol and water mixtures, but it is extremely soluble in water. If your soap gets this kind of ash, don't bother with alcohol -- remove it with plain water or steam. Even a gentle rub with a damp cloth can remove a light coating.

Sometimes people spray the top of the soap with alcohol (isopropyl or ethyl alcohol) while the soap is saponifying. The "ash" that's being prevented in this case is more likely a layer of soap crystals rather than soda ash. IMO, soap-crystal ash might be related to the white stearic spots that sometimes form in soap, except the crystals are on top of the soap. Alcohol interferes with the formation of large soap crystals, which is why it is sometimes used as a solvent for making transparent soap. If enough alcohol is sprayed on the soap at the right time and the soap is kept covered to keep the alcohol from evaporating as fast, this might discourage soap crystal formation on the soap.

edit: While soda ash develops on my soap from time to time, my soap more often gets soap crystal ash. It looks like a thin layer of white paint on just the tops of the bars. I've tried the alcohol tip, but without a lot of success. I just accept it as a normal part of soap making.
Last edited: Apr 9, 2020

See, even after all these years, it is still possible to learn. If the info about soap crystals has been posted before it has certainly escaped me and I would say that is certainly what I usually deal with, so either I do not spray enough alcohol, not at the right time or both but I will still get it on the top at times, especially when I pour at emulsion. It does not happen as often when my batter is at a medium trace which my vegan recipe is when I pour.

Kevin Dunn has speculated about the different kinds of ash in Chapter 15 of his book Scientific Soapmaking. I suspect he's also discussed this in some of his lectures to soap makers. (Maybe his lecture outlines are online somewhere?)

He lists sodium carbonate, soap crystals, and sodium hydroxide as three reasonable possibilities. Knowing how fast sodium hydroxide reacts with carbon dioxide in the air, I doubt NaOH "ash" stays as NaOH for long, but it might appear for a short while. (A good candidate for NaOH ash might have been Anna Marie's Andalusian super-lye castile many of us tried to make with a few years ago!)

For long-term "ash" on soap, however, only sodium carbonate (soda ash) and soap crystals make any sense. Here is some of my soap to illustrate the difference --

First photo -- The upright bar has ash; the bar lying flat is "clean." The ash scattered over the top of the upright bar feels exactly like the non-ashy surfaces nearby -- slightly waxy and smooth. If I close my eyes, I can't tell where this ash is just by feeling with my fingertips. It does not easily dissolve with an alcohol or water rinse. If I really scrub on the white parts with a wet cloth, or if I use the bar for bathing, the white bits do wash away after a few minutes of use. IMO, this is soap-crystal ash.

This white ash is only on the top -- the beveled edges, bottom, and sides are clean. I would have done the beveling at the same time the soap bars were cut, 18-24 hours after the soap was made. I'm certain this ash wasn't visible until a few days later however -- I've watched the soap to learn when this ash forms, and it typically takes several days after the bars are cut.

I wish I knew what's different about the unprotected top of the soap that causes this white layer to form. Chemical changes from being exposed to air during saponification? The top stays a little cooler so the soap crystals can form easier? Dunno. 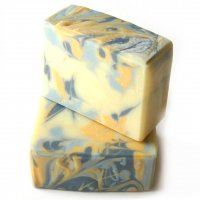 Second photo -- These are a couple bars of my "superlye castile" soap. The white ash on these bars is scattered all over the soap. It feels rough and powdery to me -- I can detect it with my eyes closed. It washes off very easily if the bars are rinsed with water. IMO, this is soda ash.

That's exactly what I call soda ash also. I just didn't know what the other stuff was. I just knew I get it occasionally. I rarely get soda ash any more (changed my recipe and my cutting times) but if I am giving the soap to anyone who will care, I just rinse it off at least 24 hours before heat shrinking it.

Thanks everyone - Love this forum you are all so informative and friendly...learning so so much thanks again

@DeeAnna thanks for the information on the different types. I generally get the first which must be crystal ash if I get it at all.