When Life gives you ugly scented candles … make soap out of them! 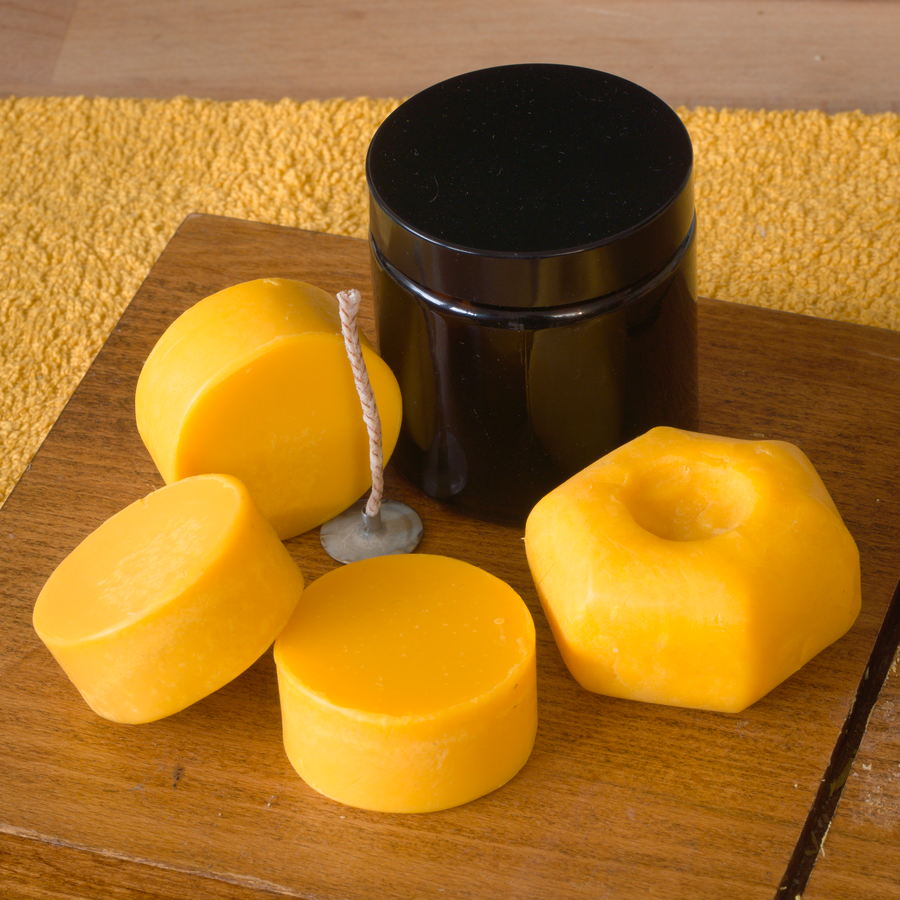 Among the slightly early Christmas presents, was a candle, scented with a questionable FO cocktail and some sloppy decoration. I won't show it out of respect to the gifter (totally not because I forgot to snap it).
But that jar!!!

I found a label on the candle that stated it's 100% soy wax. I instantly knew how to “dispose of” the wax

. Knowingly I never had contact with soy wax in the narrower sense before, so this was as well a good opportunity to compare this to my experiences with partially hydrogenated canola oil.

The recipe consists 36% of said unknown, scent-laden soy wax, plus canola, CO, castor oils. To pull the P/S ratio a bit away from stearic-heavy (and for the COLOUR), I've also added 12% red palm oil. The candle had been uncoloured, the soy wax was off-white by itself.
I went for a generous 6% lye discount, since I had to guess the FO load of the soy wax. The weight of the FO is included in the soy wax weight, lowering its effective SAP, hence “eating up” some 2–3% of the superfat margin (assuming a FO load around 5–10%).

The candle label claimed that it is orange scented. I have to stretch my imagination quite a lot to recognise anything citrusy in it. I still hope that the fragrance is not CP safe and will fade quickly

. I haven't had the heart to at least waste a few drops of litsea cubeba/lemon tea tree EO to push it anywhere near a proper citrus scent.
However, I noticed major deceleration/trace reversal that citrusy scents are infamous for. I had prepared for this, so I initially mixed the soap batter with all ingredients but the soy wax. Both the batter and the soy wax kept warm/molten, I combined them when the batter was at light to medium trace – it more or less instantly turned liquid again, down to a point where I wasn't sure if emulsion would stay stable. It took another hour of keeping warm and occasional stirring until trace eventually came back.

Now that the real cure has begun, I'm really curious how all pans out in the end (hardness/longevity, how much of the scent survives, density and colour of the lather).
I am aware that this whole FO eyeballing is somewhat risky (is it skin-safe at all?). I don't plan to give any of it to others, and even if I'l use it, it won't be with great intensity. And if it's only for the weird odour.
Last edited: Dec 27, 2021

It is a very pretty color! The red palm at 12% was a good decision. I've only used my red palm @ 5% in liquid soap, maybe I'll try it in a cp soap, you scared me with the staining warning!

Thank you! I realised that from using 80–100% red palm, it is, umm, difficult to estimate “safe usage rates”. At 4% it gave a clean, rather neutral yellow – that is completely outshined by the 12% here

(I've put them next to each other on the curing rack). Though, HP vs. CP likely makes a difference, that will change over (curing) time.

My superficial impression so far (from cleaning the equipment) was that the lather is noticeably yellowish, but probably not troublesome (staining). And time shows that the carotene colours do fade/lose some of their brilliance and annoyance over the months.

Nice color but everywhere I've seen says not to use candle dye in soap. Hope everything turns out ok.

No candle dye here. The wax itself was uncoloured (slightly off-white). The bright orange comes from the red palm oil that I added; quite some people are using it regularly without issues.
What I do worry about is the fragrance. We'll see.
H

This really isn't a good idea. Most soy wax candles have additives in them to improve scent throw, reduce frosting, etc. You don't know if they added anything else (for example, vanilla discoloring neutralizer). Also, as mentioned above, most candle dye isn't skin safe. Also, many candle fragrances also aren't skin safe.

Please stick to using raw materials made for soap.

Hope Ann said:
This really isn't a good idea. Most soy wax candles have additives in them to improve scent throw, reduce frosting, etc. You don't know if they added anything else (for example, vanilla discoloring neutralizer). Also, as mentioned above, most candle dye isn't skin safe. Also, many candle fragrances also aren't skin safe.

Please stick to using raw materials made for soap.

ResolvableOwl said:
I found a label on the candle that stated it's 100% soy wax.
Click to expand...

ResolvableOwl said:
The candle had been uncoloured, the soy wax was off-white by itself.
Click to expand...

From my time on various candle forums, I've occasionally seen people add white dye to brighten a candle that would discolor from other additives.

Also, additives aren't normally listed on a candle. When it says 100% soy wax they're ONLY referring to the fact that it's made with soy wax vs coconut, paraffin, palm, etc. They don't mean that it's free from other additives. Many Chandlers won't tell you what exact wax they're using, especially if it's a custom blend they've created themselves. Candle labels aren't like soap labels.

FYI not many people making soy candles are using GF 415 which is the pure, additive free soy. Unless they're making massage candles, most are using a blend that has additives to reduce frosting and increase scent throw. (Soy candles are rather finicky). It's highly unlikely that this soy is free from additives, and therefore isn't skin safe.

My advice still stands. Use raw materials intended for soap IN soap, and keep the rest out of it. Safety first. If the OP wants to continue with their experiment up to them, but I don't think we're providing a service to the community by encouraging it. At the very least, she should contact the candle manufacturer to try to get more information on the complete product list.

Hope Ann said:
If the OP wants to continue with their experiment up to them
Click to expand...

No fear, I won't
You're entirely right. That candle was a pig in a poke. If I were serious about using soy wax (i. e,, spending own money on it), of course I'd buy raw materials in bulk – for many reasons, and unknown additives is one of them.

This project already has fulfilled its main purpose (get rid of the candle, without risking Zany to post faint.gif). Anything beyond that is purely optional.
B

It will be interesting to see how it turns out after the cure. With the soy wax you may have made a terrific shaving soap!

I always get far too many candles for Christmas. Can't wait to hear how it turns out!