Stearic vs Ricing vs ???

I looked through other posts regarding stearic spots without finding information on how they reform in CP soap after being completely melted. Troubleshooting white spots in soap is a popular topic in this forum, but I haven’t seen information on how they may re-crystallize in soap batter. Is it a problem with temperature? Is it a form of ricing? Does it only happen with certain types of oils?

Last night I made a batch of soap with 40% lard, 30% olive oil, 20% coconut oil, and 10% castor oil. No beeswax in this blend. The oils came from a new masterbatch stored in a 1 gallon jug, which was heated to 140°F, then allowed to cool to 110°F. As oils cooled, I stick blended them with thoughts of keeping them homogenized. Oils were still clear to my eye when I added the tepid lye, straining it through a super fine mesh (no possibility of undissolved sodium hydroxide crystals). I stick blended the batter to emulsion. The batter went from emulsion to trace within a minute with no further action from me, but still remained pourable. Next I separated it into four containers, added mica and 5% Satsuma Orange fragrance oil from Nuture, then poured it into the mold. A tiny amount was left over and I poured it into a guest mold. I popped them into an oven preheated to 170° F, then turned off. (CPOP)

When I checked on it three hours later, the gelled soap had developed tiny white semi-cube-shaped spots disbursed evenly throughout the mix.

These spots are not air bubbles, but if they were, I would know how to avoid them since I mostly blend with a spatula. I could suspect the fragrance oil, but I believe I may have seen these develop before in unscented soap. If it was a problem of the temperature being too low and oil’s not being completely melted, I would expect small clumps of unmelted hard fats. It’s clear these fatty acid crystals developed during saponification because they are evenly spread and the same size throughout the soap.

Now my mind is racing with questions, but limited by knowledge of how stearin crystals and other soap crystals form in CP.
1. Is stearic the first FA to begin to crystallize in soap?
2. Can stearic pull in other stearic molecules in near proximity during saponification to form pure stearin crystals?
3. Do any of the other hard fatty acids, such as those found in coconut oil, behave in a similar matter? I ask because this type of crystals once appeared in lip balm that contained no palm or animal fat. Unless homogenized, coconut oil may be grainy, which also makes me wonder.
4. Assuming these spots are caused by rapid saponification of stearic acid, is it safe to assume that the finished soap stayed balanced between the fatty acids and lye? (Compared to undissolved hard oils causing an imbalance between the saponified soap and and unsaponified fat globules.). I.e. The steari crystal spots become a cosmetic issue only.
5. Is there a link to a source that explains how these spots form that someone could share? I would like to know how to avoid them in the future in highly designed CP soap. I assumed the crystals developed from the lard, but it’s also possible the crystals develop from one of the fats in coconut oil. 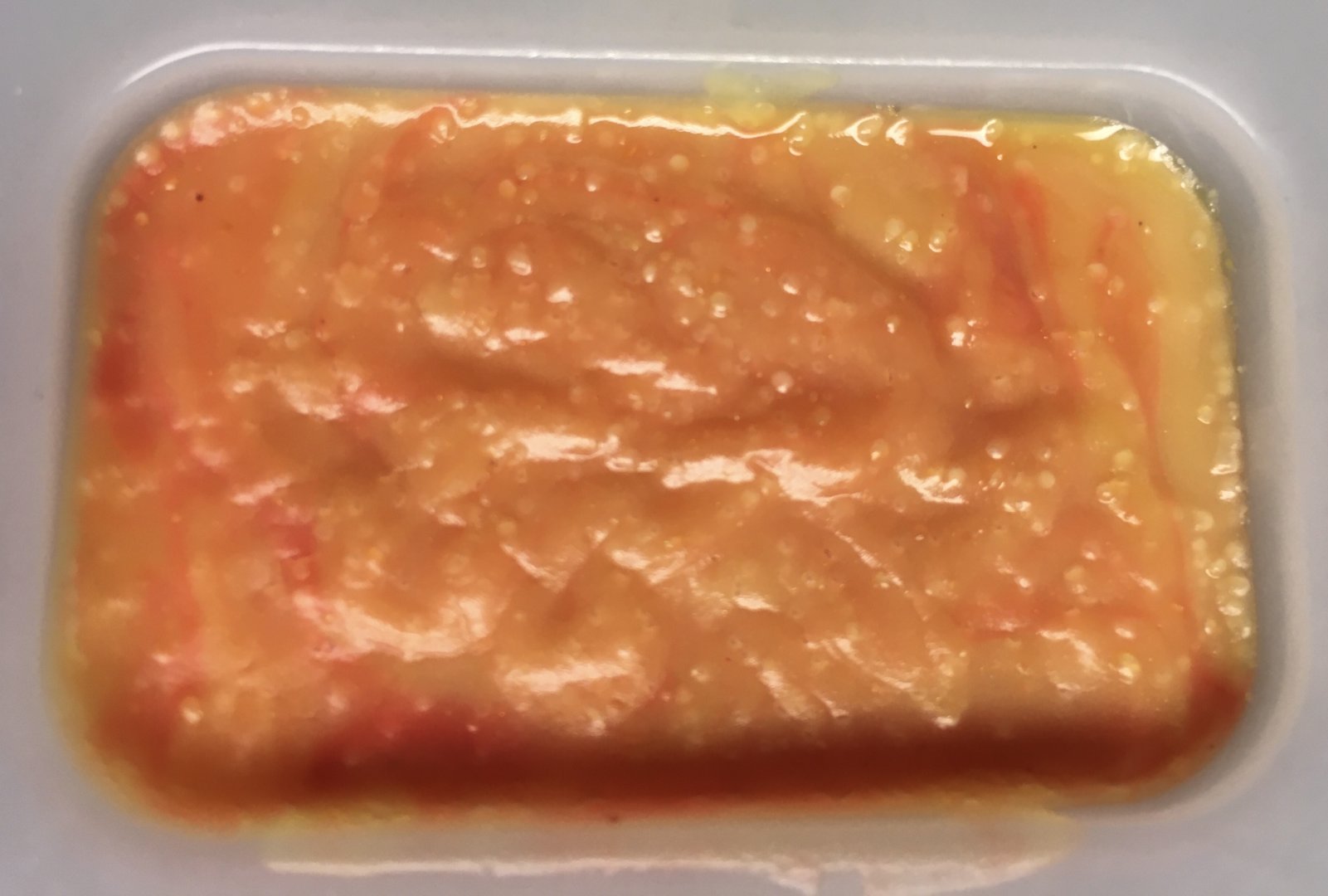 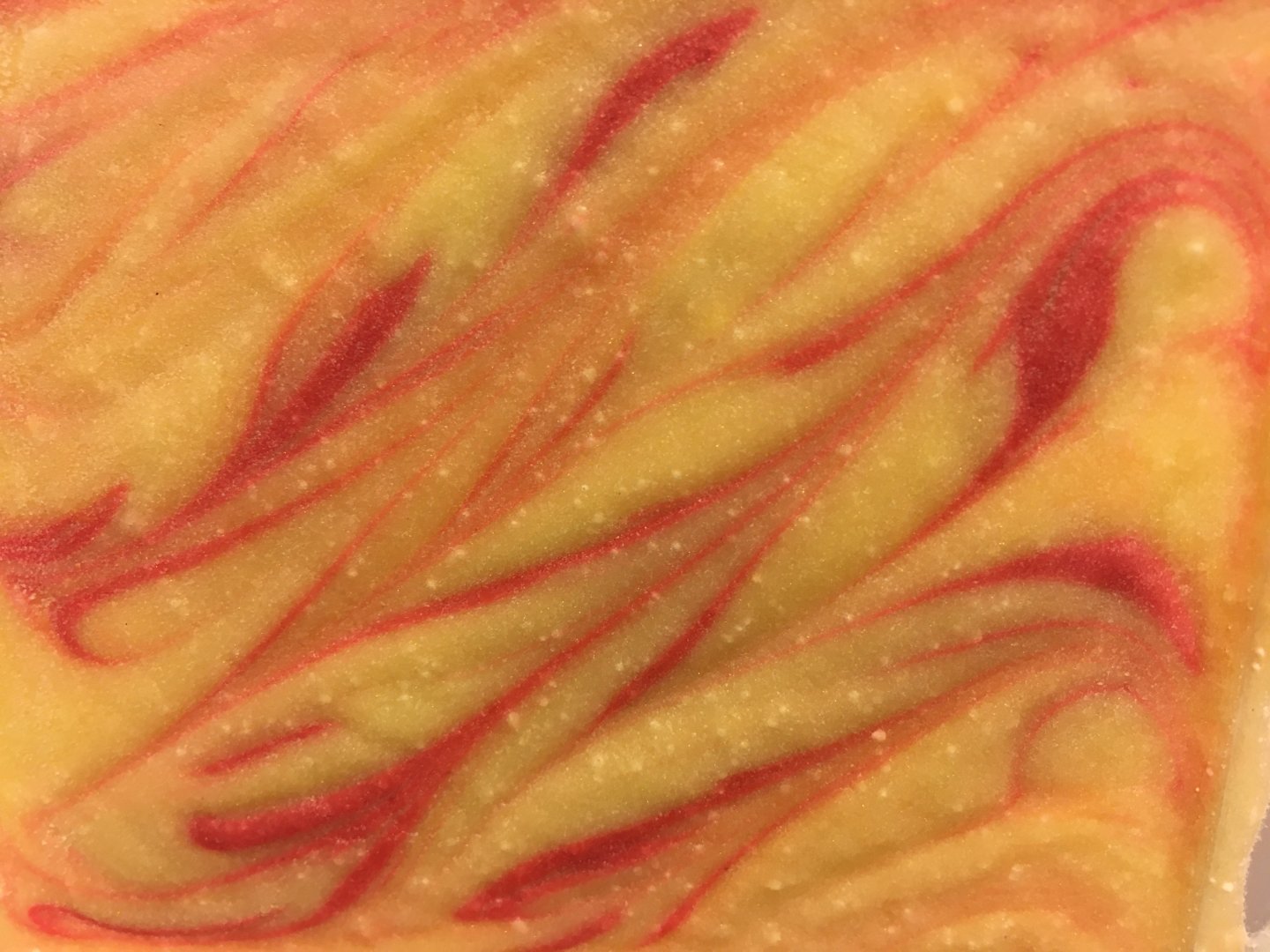 Edit - in rechecking the mold, it appears that these crystals were starting to form in the batter before I even had a chance to pour the soap.

Edit#2 - OK I just found the information I was looking for. Posting here for everyone else who may run across the problem, which seems to be many of us! What Are The White Spots In My Soap? (Hmm . . . I talk to myself at home all the time, but now I seem to be talking to myself online as well!)
Last edited: Oct 4, 2021