I'm researching the chemistry of soap making and I would like to know if I have the reactions correct.
Step 1.
Adding NaOH (sodium hydroxide) to H2O (water).

The reaction: Breaking the bond between Sodium (Na) and hydroxide (OH) with water.

The sodium molecule (Na) is positively charged and the hydroxide molecule (OH) is negatively charged.
Because they have opposite charges they have a ionic bond (like two magnets stuck to one another).

In silly terms: the lye is broken apart and arrested by the water. 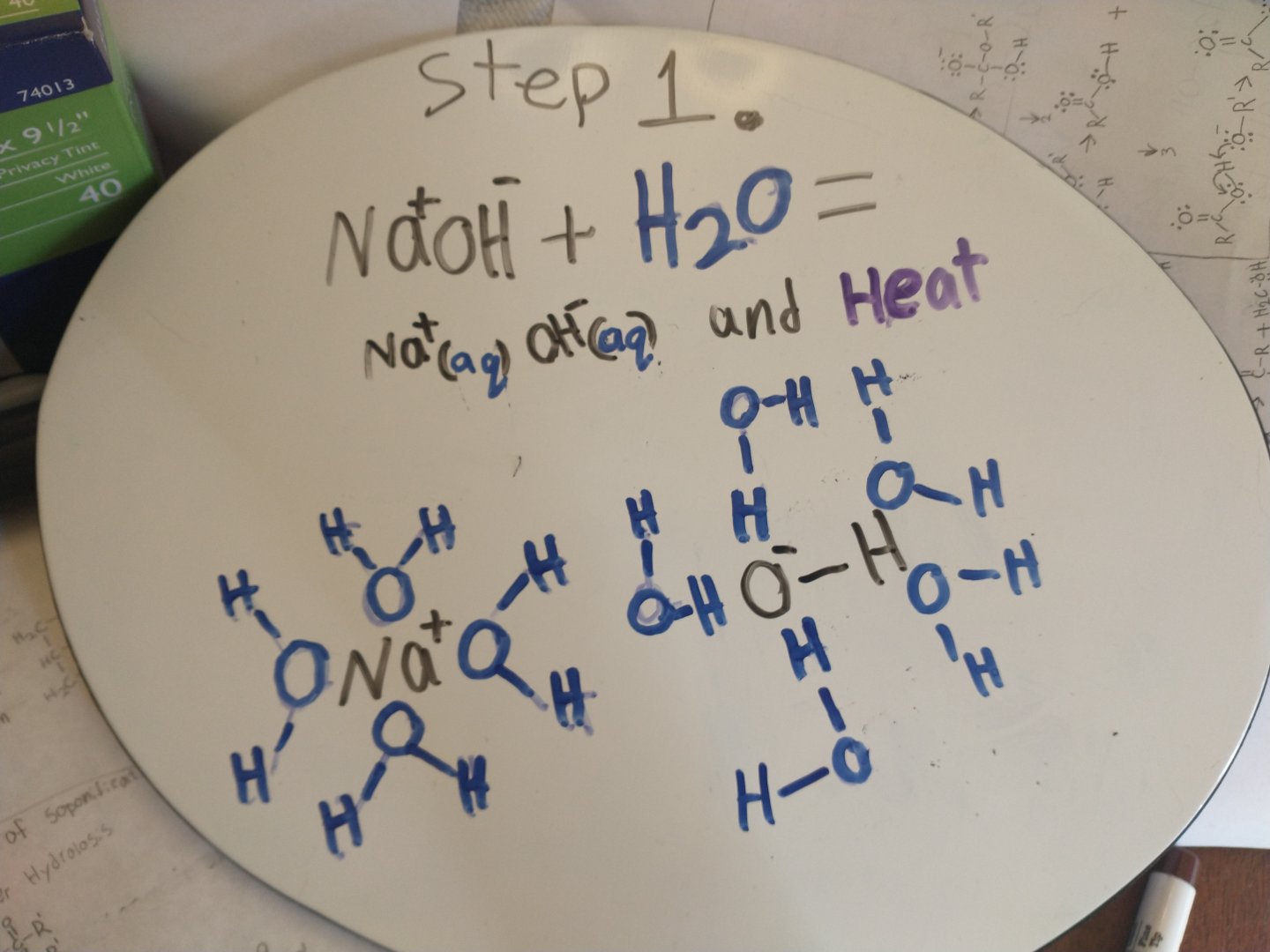 The addition of OH- will kick the negative charge on the OH though the carbon to the double bonded oxygen. Making that oxygen O-.

Because of the movement of the negatively charged ion and the addition of OH, the double bond between the oxygen and the carbon will break making a single bond.
Making a tetrahedral intermediate. 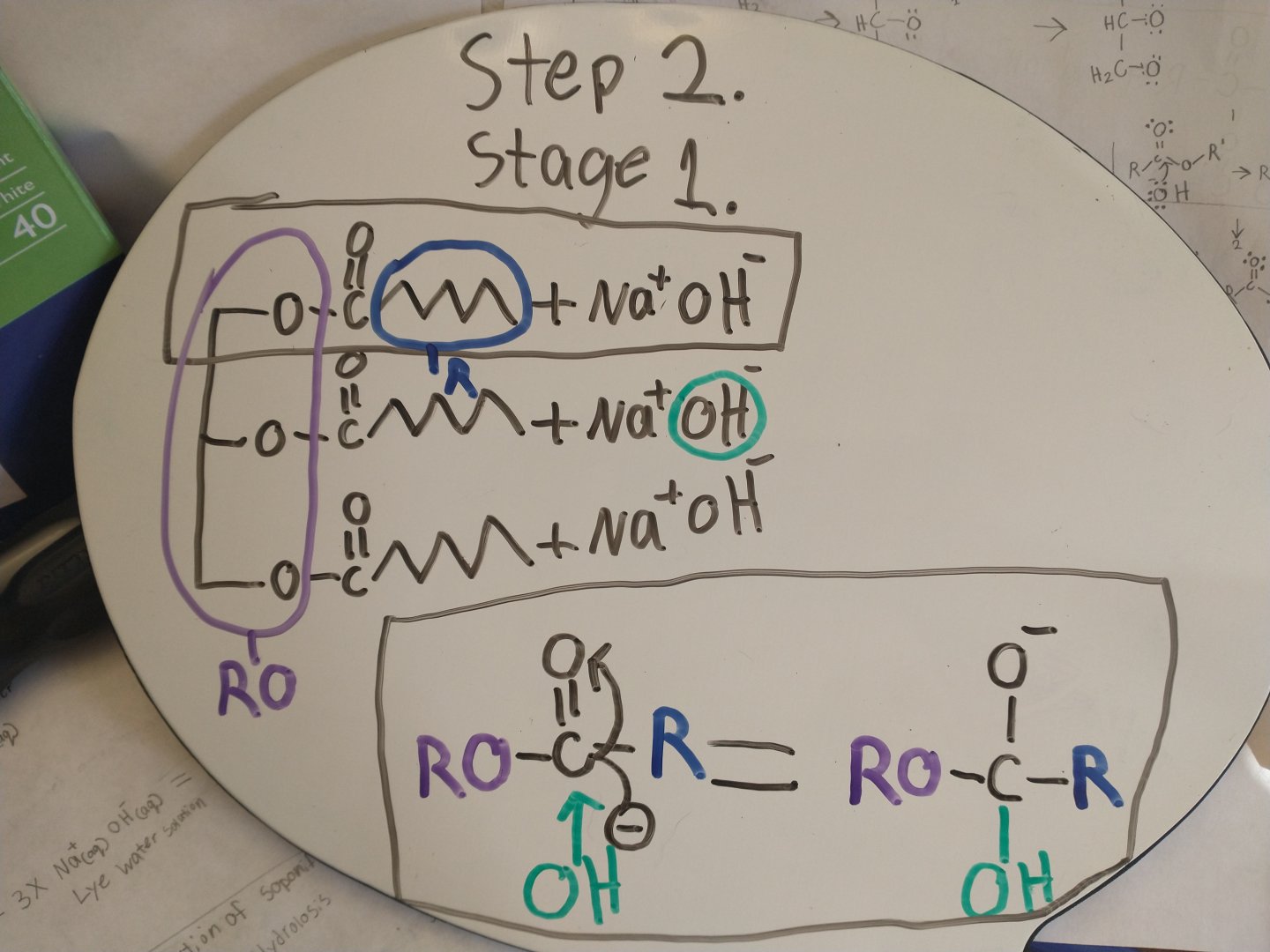 Stage 2:
The newly made O- will move the negatively charged ion through the carbon to the oxygen that is connected to the triglyceride backbone (RO group).

Because of the movement of the negatively charged ion the double bond reforms and the triglyceride backbone (RO group) gets cut away from the rest of the molecule.

The triglyceride backbone (RO group) now has a negatively charged ion on the oxygen in the RO. 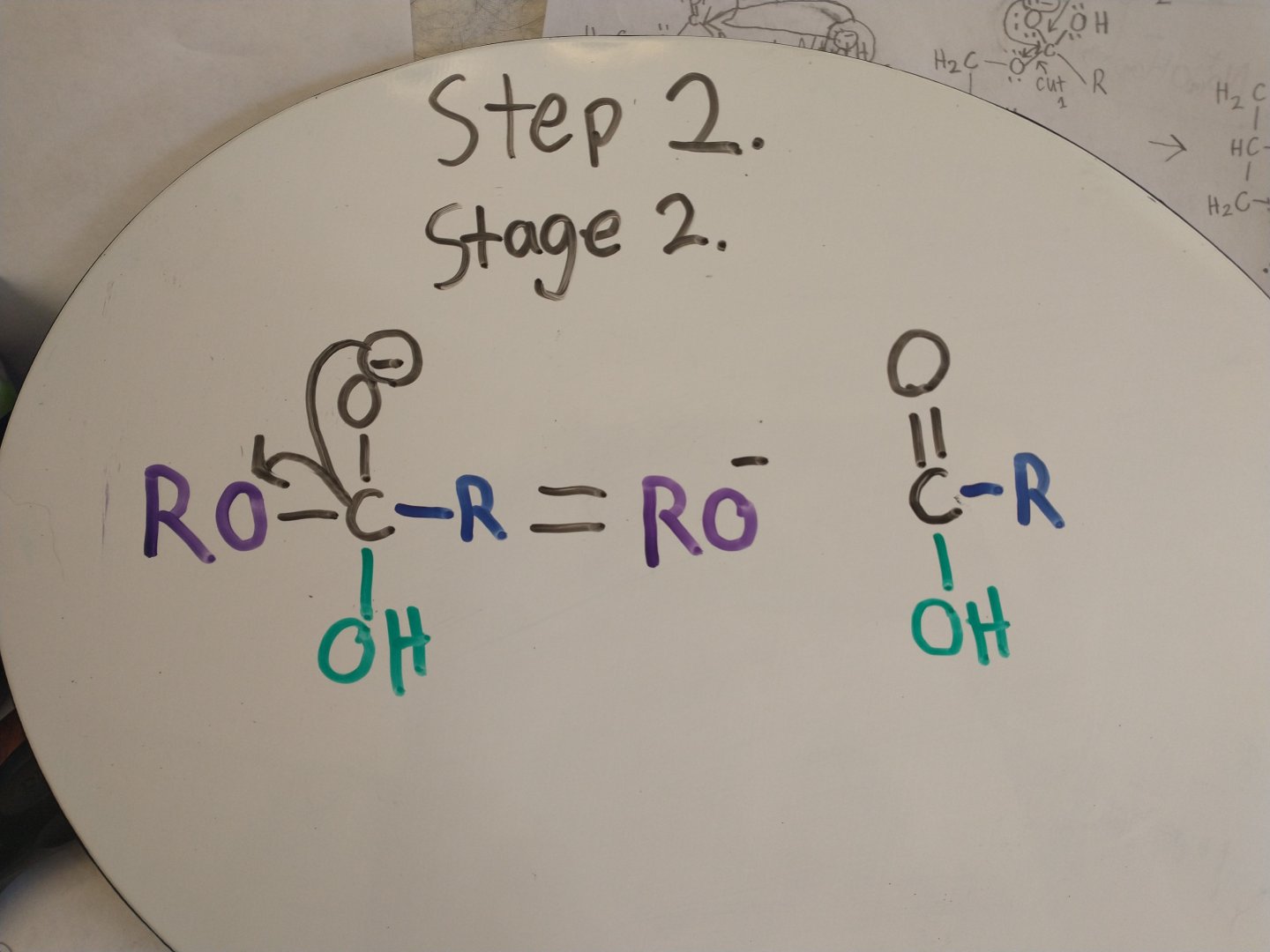 Stage 3:
O- in the RO- group will kick the negatively charged ion to the oxygen on the original OH in the carboxylic acid (fatty acid).
Making a acid based proton transfer.

The oxygen in the OH will exchange its' hydrogen for the negatively charged ion.

Making a carboxylic anion and glycerol. 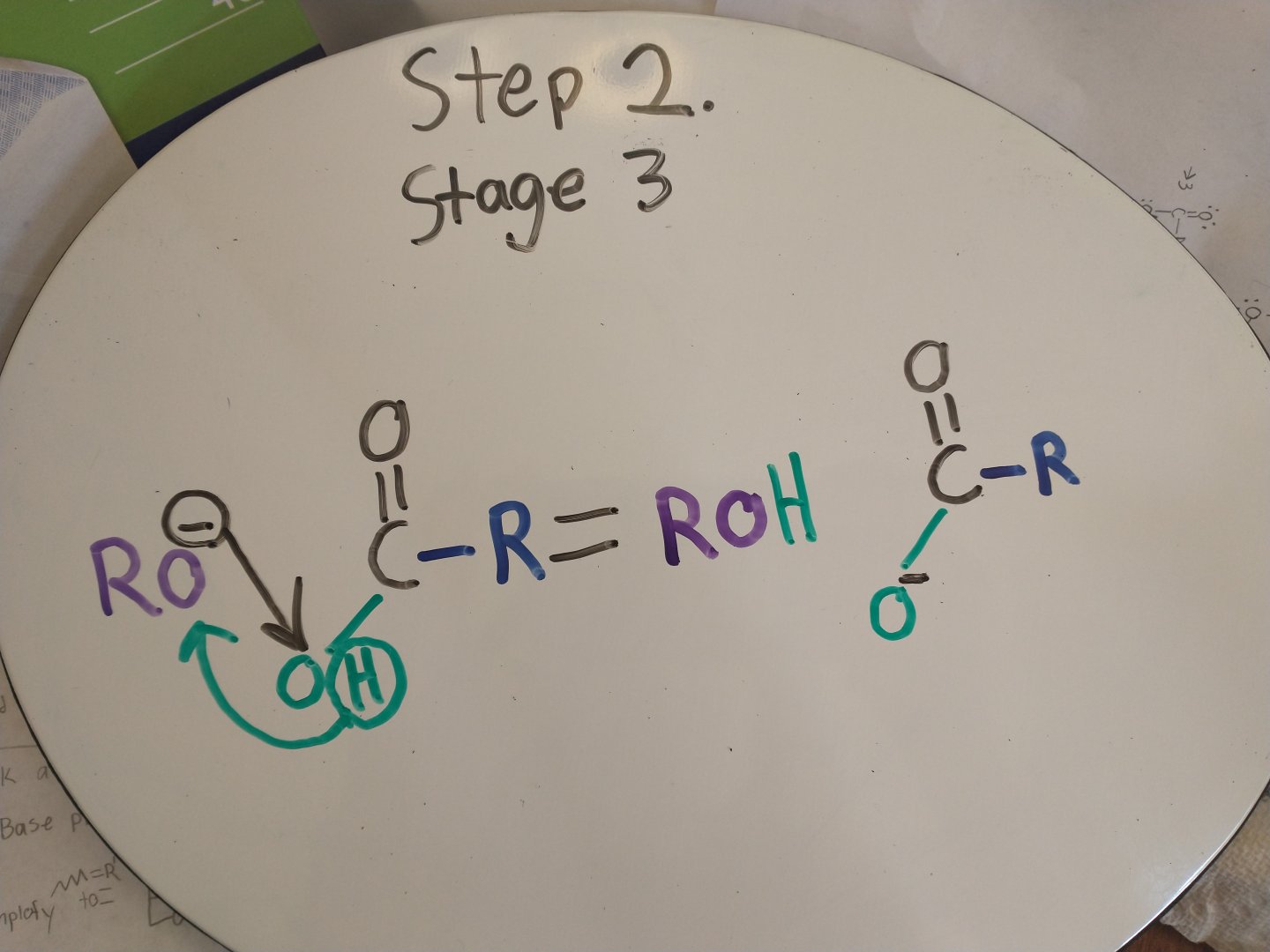 Stage 4.
The lonely sodium (Na+) hasn't reacted though all these reactions so far.
But now the sodium (Na+) will form an ionic bond with the carboxylic anion to make a molecule that has a sodium head and fatty acid tail (soap). 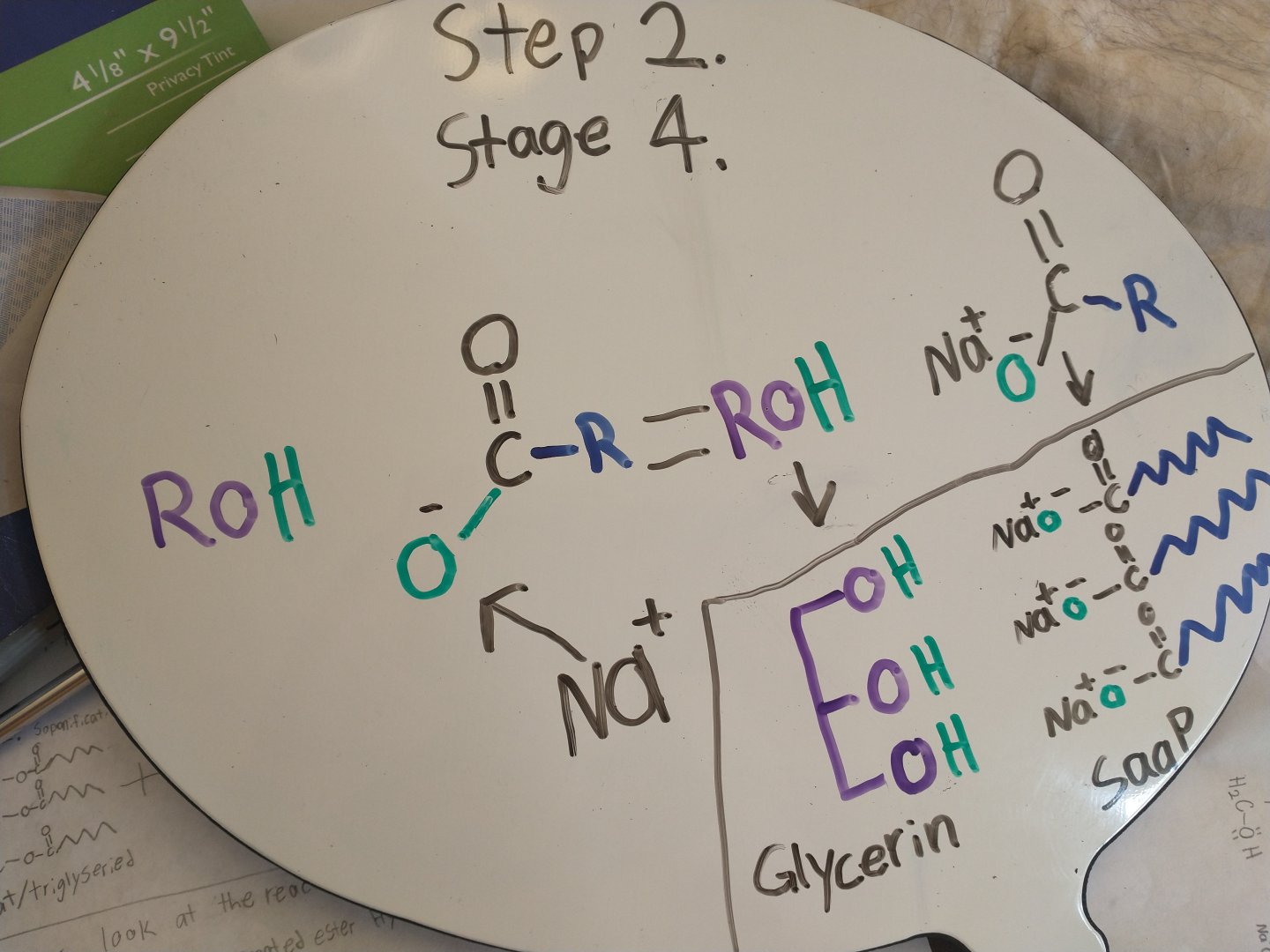 In simple terms: The hydroxide (OH) in the NaOH (sodium hydroxide) will attack the fat/oil and after a bunch of back and forth with some negative charges you eventually cut the fat/oil into glycerin and soap.
Did I get it right?
Here is where I got most of the info from:

Probably, but I'm not absolutely sure, to give you an honest answer. You've listed all the intermediary reactions, and I don't retain that level of detail about the saponification reaction.

The overview reaction is the level of detail that most people want and need to know, so that's the most I normally cover --

I applaud your determination to fully understand the chemistry -- kudos to you!
Last edited: Feb 24, 2021

@Kat852 Wow, that looks great! I appreciate the details. And so far I don't see any error, I just want to comment on some details.