I just got finished making an apple and then made a cherry--the cherry is going to be interesting cuz the batter turned orange as soon as I added the fragrance. it smells great in here!!!
N

Made Zanys no slime Castile! Tweaked, of course....came out much better than I thought it would considering .....very happy! I used annato infused oo and calendula infused oo, have a deep gold soap. I used serrata, amyris, bergamot and cinnamon eos....very strong foresty/wood scent. It came out much better in the finished soap than oob...thank heavens. Please forgive my terrible spelling if annato and serrata are wrong.....Ive become notorious. Ancient gold coins soap.

just finished a HP soap--scented with poison apple from nuture soap. it said it accelerates fast and discolores to orange in CP (didn't see that when I ordered) I colored it white only and am hoping it wont discolor. it is an awesome scent--it has apple orange neroli bergamot and rose--gonna say it again its awesome. am waiting impatiently for the other soaps I made also--I get anxious until I make the cut--I like how the tops look but am always nervous

Marilyn Norgart said:
just finished a HP soap--scented with poison apple from nuture soap. it said it accelerates fast and discolores to orange in CP (didn't see that when I ordered) I colored it white only and am hoping it wont discolor. it is an awesome scent--it has apple orange neroli bergamot and rose--gonna say it again its awesome. am waiting impatiently for the other soaps I made also--I get anxious until I make the cut--I like how the tops look but am always nervous
Click to expand...

I cant wait to see the cut. I am ALWAYS anxious and nervous for the Cut.

I Just finished pouring an HP batch of Amber & Black Current from Naturesfragrance. It has a smidge of vanillin so I did the main part brown and in the pot swirled with white and black . Only the black and brown have fragrance just in case.

My second batch of 'Karma Chameleon' is CPOPing as we speak. I have adjusted the essential oil combo since the last batch I made to try and get a closer match to the smell of the Karma soap from Lush (my favourite!).

Cut my first batch of Pumpkin Chai soap. The fragrance is more Chai than pumpkin. 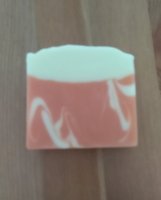 Over the last few days I whipped up 100 Salves and Balms for the show, labeled and sealed.
New boxes for the Salt bars, new labels created and labeled.
All those packed and ready to load with all the soaps.
Also got my list of 'things to bring' all set to load up for late this morning.
Have to drive an hour to pick up my Palm stock.
Get home to load up for 4 day show, get to show to set up for Friday-Monday--- SO happy they let us do this all day on Thursday !!!
Charge car at some point, then plot out my drive to show with Charging the car for over an hour while on the road. I have an all EV so the 1.5 hr drive can be a killer .
K

bluejay2686 said:
Thanks!! Yes, I dont like adding essential oils, idk why. And the credit for the mold goes to mcvities digestive, I just love them.
Click to expand...


msunnerstood said:
It has a smidge of vanillin
Click to expand...

one of mine did too but it turned orange in the pot (I posted that one in photo gallery) I used a lot of white and its really a dk creamy color and with it used a dk cherry--I am happy with it now just hope it doesn't morph on me
Last edited by a moderator: Aug 30, 2019
N

I love any biscuits.....does anyone know where I could find a fo like Maja by Myrugia....
C

You all are inspiring . I’m learning so much from you guys! Your all very talented. Thank you

steffamarie said:
BF's mom texted me and asked if I had any lavender soap. Said a friend of hers is going through a really difficult custody battle for her 9 year old son and he's really feeling stressed. Lavender helps him calm down and helps him to sleep, according to her. I sent off my whole stash of 9 bars for her to keep and give away to whomever. I know what it's like to have a lot of family drama and stress and I really hope my soap will help him feel a little better.
Click to expand...

That's very kind of you!

Last night made the final vegan test batch. It did not go well. I used BCN's Opium Type FO... don't. just don't do it. It was solid in 4 seconds (really thankful that I blended to emulsion before adding FO which I don't normally do). I threw a towel on it and walked away for 5 minutes, it was worse, so I smooshed it into the mold as best I could. Completely frustrated, so I didn't even want to make more soap last night. I cut it this morning at 12 hours as it was rock hard, my wire cutter had some difficulty. There is some FO oozing, (I zap tested it, no zap so I'm positive it is FO) so it's going to sit for a few days to see if it reabsorbs. Surprisingly, the soap looks fine other than the oozing, and air gaps where the soap didn't get pushed down into the bottom of the mold. Glad these are just testers.

I've been contemplating making Nag Champa today, but now I've run out of time as I have to head to the other job shortly. (I didn't make it to the full time job today that's to a fender bender that has put my vehicle out of commission.) Will see how I feel after work, it's been a very long today and I expect some soreness from the accident to kick in. I also got my shampoo bar ingredients in, so I would like to play around with that recipe too. SCI noodles are so cool looking, I'm like a kid and get giggly looking at them. :soapnerd:

oh no--hope you don't feel too sore. and sorry you had issues with your soap
I have had a bottle of nag champa for a long time but don't know why I just cant bring myself to use it, I like the smell. I think its cuz it has the dreaded vanilla in it
N

I was given half a gallon of farmhouse lambic beer made with saguaro fruit....it is the prettiest pinkish color. I am boiling now, preparing to freeze for beer soap.

Nanette said:
I was given half a gallon of farmhouse lambic beer made with saguaro fruit....it is the prettiest pinkish color. I am boiling now, preparing to freeze for beer soap.
Click to expand...

Can't wait to see and hear about this one! I love beer soap!

I wrapped some soaps and put them away (I wrap in paper after a week or so and let them finish curing like that). I’ve started using paper from packages, the brown porous stuff that is wadded up and used to fill up empty space. Cheap and green!

Made coffee soap and used frozen coffee to replace water. This turned into a learning experience when I got to see false trace for the first time

. Stick blended some more and it’s now in the mold, in the oven.