Hi everybody,
Another batch pinetar soap. No color, no fragrance. Just straight up pinetar. My original batch stayed pourable. For a reasonable amount of time. But this batch just did not want to trace.

All ingredients are fresh, only sub lard for palm. (Same Percentage)

Finally after 20-25 minutes. It started to noticeably trace. Made sure it wasn't separated. Throughout the entire time. My biggest worry. Then poured. Now I'm not complaining.
Just passing this along. Pinetar that took forever to trace? Soaped around 100 Fahrenheit. Lye room temperature. 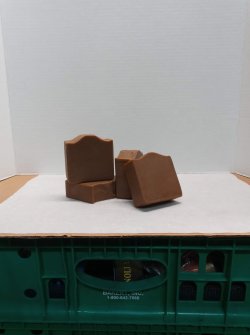 Ford said:
this batch just did not want to trace.
Click to expand...

Hmm. That's odd. I wonder why?

I made pine tar soap recently and also didn't stick-blend at first. I actually melted all the oils together, including the pine tar, and then added my room-temp lye solution. It simply would not come to trace with hand-whisking alone. But after one tiny burst with the SB, it was pudding for one second, and then semi-solid soap that had to be pounded into the mold. It was mostly smooth but had a few air pockets, for sure.

I think you have discovered the secret to making Pine Tar Soap that doesn't seize! The picture is clear evidence of that. Lovely soap. Well done!

Judging by your experience and @AliOop's experience, it looks like hand stirring is one clue but IMO not the only one. I also have made pine tar soap without a stick blender, and did not have the same experience as either or you. So there are other factors at work, such as brand of pine tar, temperature, recipe and also process differences.

So I do believe your recipe (including brand of pine tar), temperatures, and possibly certain steps within your process also contributed to this slowing of trace.

But I do have a couple of questions:

Recipe factors to consider: Lard slows to trace, so hand stirring a recipe with 40% lard also contributed to slowing trace, particularly if you normally make pine tar soap with palm rather than lard.

For me, the brand was Farnam's Horse Health pine tar, which is very very thick (see first video below), also my temperatures were different because I heated the pine tar to soften it before adding to the soap batter (after trace), and of course our recipes did differ, not only in oils (a little bit), but perhaps in water content as well.

From what I see & read, Bickmore pinetar is pourable from the can (see 2nd video below), whereas the brand I use is very thick and stiff and cannot be poured from the can without first softening with heat. Some soapers heat the pine tar with the hard oils to melt & combine them all in one step, which would contribute to faster trace. I have not tried heating pine tar with the oils prior to adding the lye solution, so don't have experience with what that is like.

Below are 3 youtube videos on no-SB pine tar soap. These links show the consistency of 3 brands of pine tar in their the original containers starting a the spot where the consistency of that particular brand is clearly visible. I suspect this difference of consistency may also affect speed of trace.

I am intrigued by the long time before it traced. I am going to have to try a batch without using a stick blender. I have used the Horse Health brand and American Rope & Tar brand PT and it has always been a rush to get it in a mold before it completely seized up.

I experienced that until I followed the process (although not the recipe) from Ellie's Everyday YT (video was posted above). I melted and mixed all oils and the pine tar together; they were probably at 100-110F. Then I added my room temp MB lye solution, which had some additional water with dissolved sodium citrate, which immediately caused the lye solution to start warming up. The combined batter was probably 95-100F when I began to stir it all with a whisk. This was a high-tallow recipe, and it did not want to emulsify even after minutes of whisking. But a one-second burst with the stickblender made it go from separated to pudding, to almost solid. I'd like to get smoother results, so I may try again and just let it sit for a bit between bouts of whisking.
Last edited: Sep 8, 2022
F

Hi, no claims here. Just passing on my observations. Hoping others may learn. This is only my second batch of pinetar. So I was surprised
when it did not trace as quickly as before. Used this recipe for the first batch. But did swap out the palm (no stir) for lard. So yes that would contribute
to slow the trace. Ambient temps in my cellar this time of year run about 65-70. My pine tar was added to the hard oils prior to adding to the soft oil, lye solution mix. The process I found online. In a video. Hope this helps. Thanks again.
The recipe:
OO 40%
CO 20%
Lard 20%
Pine tar 10% (Bickmore Brand)
Cocoa Butter 5%
Castor oil 5%

earlene said:
... and of course our recipes did differ, not only in oils (a little bit), but perhaps in water content as well.
Click to expand...

Ford and AliOop, what lye concentration did you use?
(I wonder if this has contributed to the slower trace?)

Thanks for sharing Ford - I like your pine tar soap!

Great question, @Marsi, I actually deviated from my normal 40% and went with 33%.
F

Hi, used 1.7:1 liquid:lye Ratio or 37.04% lye concentration. These numbers are from soap makers friend. Same numbers for my previous batch.

It's not the water then ...
So far, the two things you have in common are adding the pine tar to the oils and hand whisking.
I'm going to have to try this!