I hope it's ok to post this here rather than in the beginner's section - I figured since the liquid soap area is a bit more specialised it would be more appropriate.

I decided to try a liquid soap for my first ever soap attempt, with the idea (maybe incorrect) that I could focus on just the cleaning aspect without having to worry about the consistency of a bar and all that as well.

I chose this recipe to start with: http://nwedible.com/how-to-make-diy-liquid-castile-soap/. I didn't know to check at the time, but running it through Soap Calc in retrospect, I believe it is 3% superfatted.

My experience didn't go exactly according to the description!

First of all, the lye dissolving was anti-climactic. I was expecting more of a sodium-on-water kind of thing, but it didn't even approach vinegar-and-baking soda. It fizzed a very small amount, like if you were quiet you could hear it, but there was nothing much to see. It dissolved completely in a fairly short time just with stirring, and the resulting solution was hot, but not so hot I couldn't hold the bowl comfortably.

When I added the lye solution to the oils, the entire thing started expanding pretty rapidly. I was blending with a stick blender as specified, but pretty soon it was threatening to climb out of the pot. I scooped out as much as I could and kept blending the rest, but it continued expanding! I ended up with about two thirds of the mix in bowls in the sink, and continued working on the remainder.

So, big question area number 1 - temperature? I presume that was the cause of all this overflowing activity? The soap mix in the pot basically seemed to be boiling. I wasn't sure what it should have been; the recipe says to set the crock pot to 'high', but mine doubles as a deep fat fryer and goes all the way to 250C... My research said that US crock pots tend to run to about 140, and then I added a few degrees since it runs colder than the dial indicates... So yeah, pretty sure the temp was totally wrong. I turned it down to about 80C.

The stuff in the pot settled down after a while and I gradually added the rest back in. For some time I felt like I was back on track - I got a big white puffy stringy mass which seemed like it could be the 'puffy taffy' phase, so I kept cooking, blending, and stirring.

It was meant to take 3 hours to get to a transparent gel. I cooked that thing all day, from about 10 in the morning until late at night, and it never got there. It got heavier and more solid and I started second guessing myself on the temperature and turned it back up. It softened a lot as it heated and I got a very mashed potato kind of consistency. It didn't progress much from that point. I tested a couple of times for clarity by dissolving some, but it was totally cloudy, which is kind of what I expected from looking at the paste.

At this point I had to go to bed so I turned it off and left it overnight.

Next day it had hardened a lot, but otherwise looked basically the same. 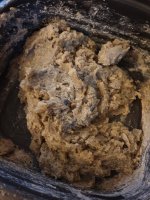 This is when I realised there was too much I didn't know, and did some more research. I found this site, and read enough to come to the conclusion that it may not be entirely ruined.

I did the 'tongue test' and didn't experience anything I would describe as a zap, so felt a bit encouraged. Also, having now used the calculator I felt happier that all the lye was probably reacted.

Big question area number 2 - is it even reasonable, given the recipe, to expect that the soap would go to a clear, amber gel? At no point did I get anything other than a greenish olive oil colour, and from what I've read here, any amount of superfat will make it stay cloudy. The samples I had diluted had separated overnight into a clear and a white layer. 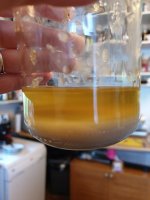 I tried a little bit of this as actual soap, and it seemed to work fine; it lathered up nicely and rinsed off as expected, and my skin didn't burn or fall off or anything, so I felt a bit encouraged. I decided to dilute the rest of it and hope for the best.

The more water I added, the more it absorbed. It stayed as paste but just sucked up all the water. It took another overnight and good part of another day to get it to the point where it was liquid. I ended up with about 5 litres all told.

It still separates, but it cleans very well - considerably better than my cheap washing up liquid, for example. So I guess I've made liquid soap, but it's not exactly attractive, and I feel like it shouldn't have been that difficult.

If you've stayed with me this far, I'd love to hear any thoughts on what I did wrong, and what is a reasonable expectation from this recipe? I'm going to try some other recipes that are linked from here and see if I get better results. Is there a minimum amount that's feasible for this kind of method? I don't really want to be making massive quantities until I'm a bit more comfortable with the process.

Thanks in advance for any advice

Burned soap paste - what did I do wrong?