Please do NOT post comments here, only entries! Comments can still be made on the challenge thread.

I am off to our royal show so I will kick things off. I used a loaf mould for this soap and filled it using the linear swirl technique on the BB tutorial. Ended up with lines on the top which I first did a peacock swirl and then in went through and just did a little spiral several times down the middle. Or at least, that's what I wanted to do. My FO stayed steady until I was ready to swirl then it accelerated without too much warning. I ploughed ahead anyway and although I didn't end up with the visual I was aiming for ... I still like the result I got. This is a goat tallow and avocado recipe scented with white ginger and Amber 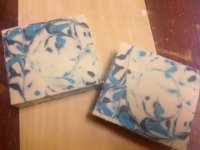 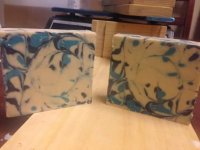 This is my entry for the linear swirl challenge. I am leaving tomorrow for some cabin time with friends so there will be no more attempts for me. I'm glad this worked out more or less as I planned. I poured my soap in thin lines using squeeze bottles, then did a top to bottom Taiwan Swirl followed by spiral swirls. I've included pictures of the pour and the swirling which I think shows how forgiving a Taiwan Swirl is. Lines can be crooked and messy and a little skewering makes everything pretty! This soap is scented with Frosted Birch and Juniper from WSP.

Here’s my entry for this month’s challenge. I made the soap using two batches of batter. The colorants for the first batch were black Brazilian clay (which is more of a dark brown), activated charcoal powder and reduced chocolate stout beer I used as the “split” liquid. For the second batch, 1/2 was left uncolored, 1/4 was colored with gold Brazilian clay and 1/4 was colored with red Brazilian clay. I poured a base layer of the dark batter and then used funnel pitchers to pour lines of the four colors on top of the base. I did it this way because I thought it would be interesting to have a dark solid base. To create the swirls, I first ran the chopstick back and forth in parallel lines that were perpendicular to the batter lines. The chopstick went through the full depth of the batter to the bottom of the mold. I then ran the chopstick lines in the same direction as the original batter lines and again through the entire depth of the batter. I’m including photos to show the lines of batter before swirling and then after the first run with the chopstick. The placement of the chopstick lines looks super distorted in that photo! All I remember is that I was moving fast and found it challenging to take photos while also making soap. The soap is scented with BB Cedar & Amber, plus it retains some of the scent of the stout.

Edited to correct the proportions of colored batter in the second batch.

The lighting was not the best for the photo above. I will switch it out if the opportunity arises to get a better photo before the entry window closes.

Here is soap in progress: 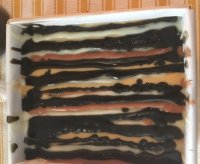 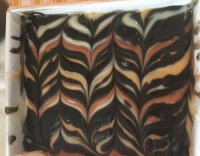 For my entry, I used a slab mold and attempted to pour thin lines, then did a linear swirl followed by a double helix swirl. I split the batch into 4 and left one uncolored, and colored the rest with Terra Cotta red mica, Blackberry mica and Jade mica. The FO I used was Raspberry and Vanilla. This was a lot of fun and I love the different designs!

amd said:
Please do NOT post comments here, only entries! Comments can still be made on the challenge thread.
Click to expand...

I did 4 batches, some more successful than others! This one I used bottles to pour the top and a chopstick for the swirl. I'd never done a peacock swirl before, but *love* peacock feathers! My neighbor is kind enough to pick them up from her dog walking path, when she can find them and gifts them to me! My entry with my inspiration. This was fun and a great learning experience! 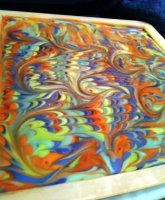 These are my entries for the linear swirl challenge. #1 is made with a purple mica and # 2 is made with a bronze mica. Both were done in a loaf mold, but I cubed and cross cut #2. My soaps are an Olive Oil, Avocado Oil, and Coconut Oil mix. they are scented as Lemon Grass and Burganote, and Honeysuckle.

A couple of years ago I did a Taiwan swirl (once) but with dividers, nice to know I can now do this w/out dividers….thanks to this challenge to encourage me to give it a try.

I had time to make 2 attempts of the Taiwan Swirl/linear swirl before leaving to be with our grandchildren; this is my 2nd.

I love goat’s milk soap so I substituted 100% of my water with GM. My oils are as follows: Canola (high Oleic), Beef Tallow, C.O., Palm, Rice Bran, and Castor—38 Saturated: 62 unsaturated. I wanted to use Lard instead of Tallow but was out.

I divided my batter into 5 containers; the colors I used were Magic Purple, Silver Shimmer Black, Scarlet Red, Magic Yellow, and Cobalt Blue. The red I chose is actually more like a dark pink.

I can’t remember what I scented it with, those notes are home. The FO had no vanilla, nor did it accelerate trace; it was one I used before so I knew it’d behave.

I put lines of each of my 5 colors in my 9.3” x 6.2” x 2.6” mold using my squeeze bottles. Lol, ended up with 12 lines instead of two sets of 5 due to not making my lines wide enough. I placed my lines outward in so the space ended up in the middle. The middle gap was filled in with and extra yellow and blue, the blending of the two makes it look as if I used green also but I didn’t. I kept building upon the colored lines until all the soap batter was gone from the squeeze bottles. 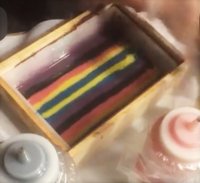 I used a chopstick to make my Taiwan Swirls:

Next, I swirled around the edges and through the middle. The size of my block mold allowed for 2 rows (4 bars each per row).

My entry is a nonpareil swirl scented in BB Moroccan Mint! I did a freehand pour in a slab mold and used a pipette with the tip cut off. I’m so happy with the results!!!
Here’s a full sized photo of the slab top: 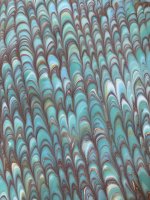 And my entry photo: 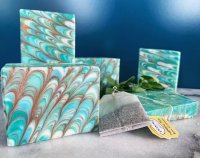 I made it! Just in time.. (right?)
Here is my hot process linear swirl soap, colored with AC, spirulina and annatto.
I'm glad I found some time for a third try, I think it's a lot better than the others. I did a simple Taiwan swirl, going back and forth first perpendicular to the lines, then parallel.

And here's my entry picture:

@amd I initially separated out half of my batch as an uncolored background, but I had a hard time getting all my colored batter in the mold because it started to harden on me. I think I might be in violation of the 1/2 rule now (especially since I only planed the top and not the bottom of the soap). Feel free to disqualify me if necessary

If anyone else wants to try this in HP, these are some tricks I learned along the way:
- make the linear swirl only in the top half of the soap, trying to make lines throughout the entire thickness of the soap will take too long and the batter will cool down.
-I used a piping bag to make the lines, then pressed the soap to make a flat surface. After that I would use a bamboo skewer to make the design. The soap is going to separate, but you can press it back together without harming the design.
-Make your lines uniform on top of each other (yellow on yellow, green on green etc). You're going to want to heavily plane the top and you might lose the pattern if different layers get mixed up (which happens when swirling).
-make sure you press the top tight and make it flat after swirling, otherwise you have to plane a lot off afterwards or you end up with holes in your soap.
-For me it helped to HP on a high enough temperature, so you have enough working time (I generally HP on low temps, so this might just be regular HP for some). Stay on top of your soap though, it might volcano (ask me how I know).
-And of course yoghurt!!

The entry thread is now closed. PMs for the voting link should be sent shortly!

Thanks everyone for participating!
K

@Primrose Poop. I just went back to check that I hadn't missed you in the email.
https://www.soapmakingforum.com/thr...allenge-linear-swirl.76366/page-5#post-789708
The last post with the list (the one I referred to for email) doesn't have you signed up, but going further back, I do see that you signed up in position 7, the next person who signed up somehow missed your signup post, so all updated lists had you removed from the list. I am so sorry - I totally missed that chain of events. I would have fixed it right away if I had seen it.

Congratulations @steffamarie, @dibbles and @Michele50 on your beautiful winning soaps. They do a wonderful job highlighting the range of designs and styles you can achieve using this technique.
N

Mobjack Bay said:
Congratulations @steffamarie, @dibbles and @Michele50 on your beautiful winning soaps. They do a wonderful job highlighting the range of designs and styles you can achieve using this technique.
Click to expand...

Yes, there are SO many ways to go with that design; each and every one of them uniquely beautiful in its own way. Everyone's was a joy to view. ..............and the HP was brave to undertake.
N

My email congratulations notice for seffamarie, dibbles and Michele50 exploded with confetti ......