Last week I made a batch of Zany's No Slime Castile soap, as Bastille soap with 15% coconut and 5% castor. I thought it would be fun to see how this batch performed versus other formulations which I prepared over one year ago. Recognizing it is completely ridiculous to expect much from any 1 week old soap, not to mention a bastille soap, that was not about to stop me!

Method:
Each dry soap was used for 5 seconds in running warm water (110F) to evaluate for lather appearance and subjective perception of the feel of the lather.

The contenders:
Castile soap prepared 1/1/2021 using 100% olive oil with added sodium lactate at 5% SF and water:lye of 2:1 and added mica colorants and fragrance. 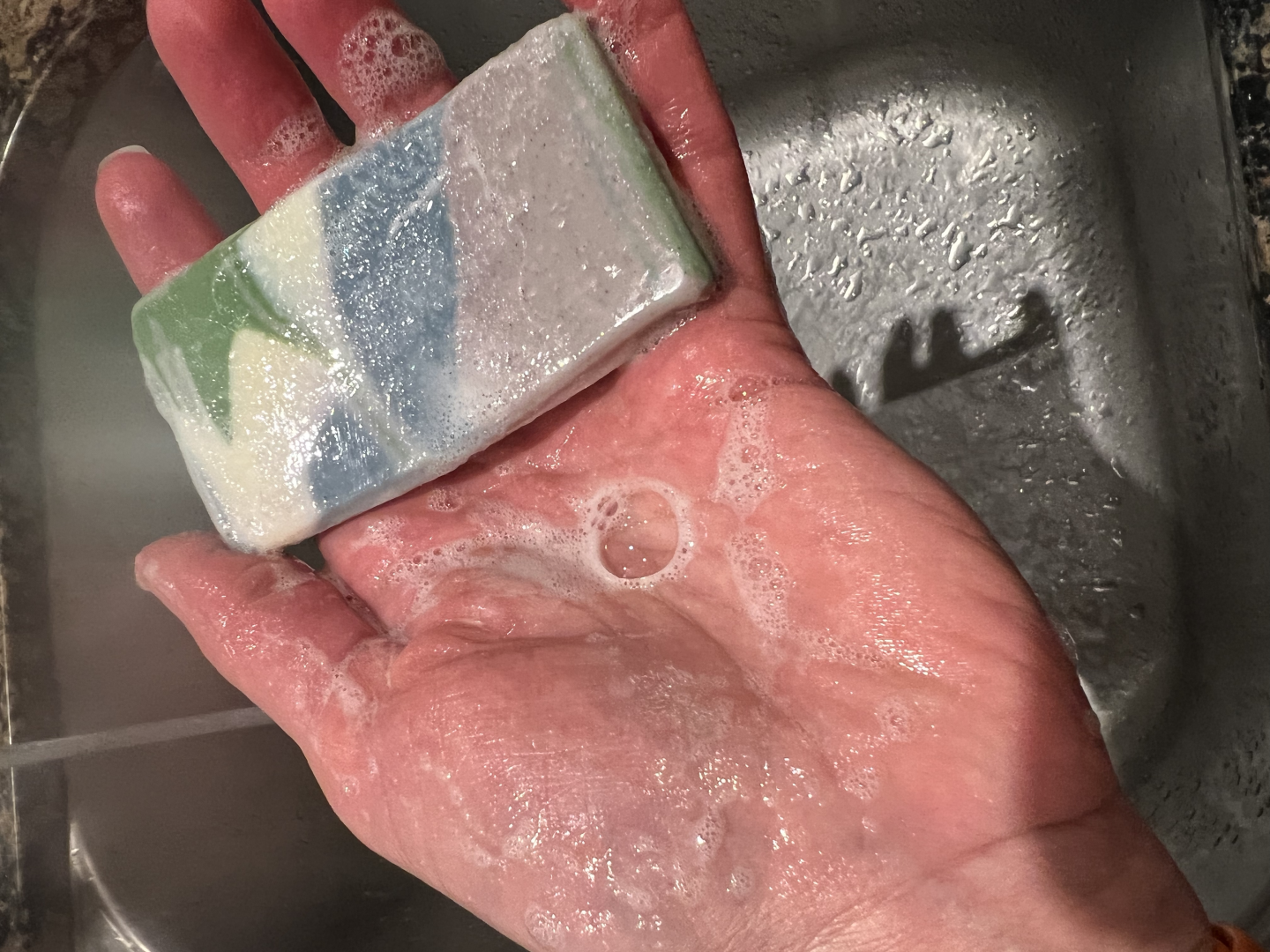 Bastille soap:
No slimy sensation, lather is bubbly and slightly creamy. This bar had been used previously, but had not been used for several months. Nicely performing lather in appearance and sensation. 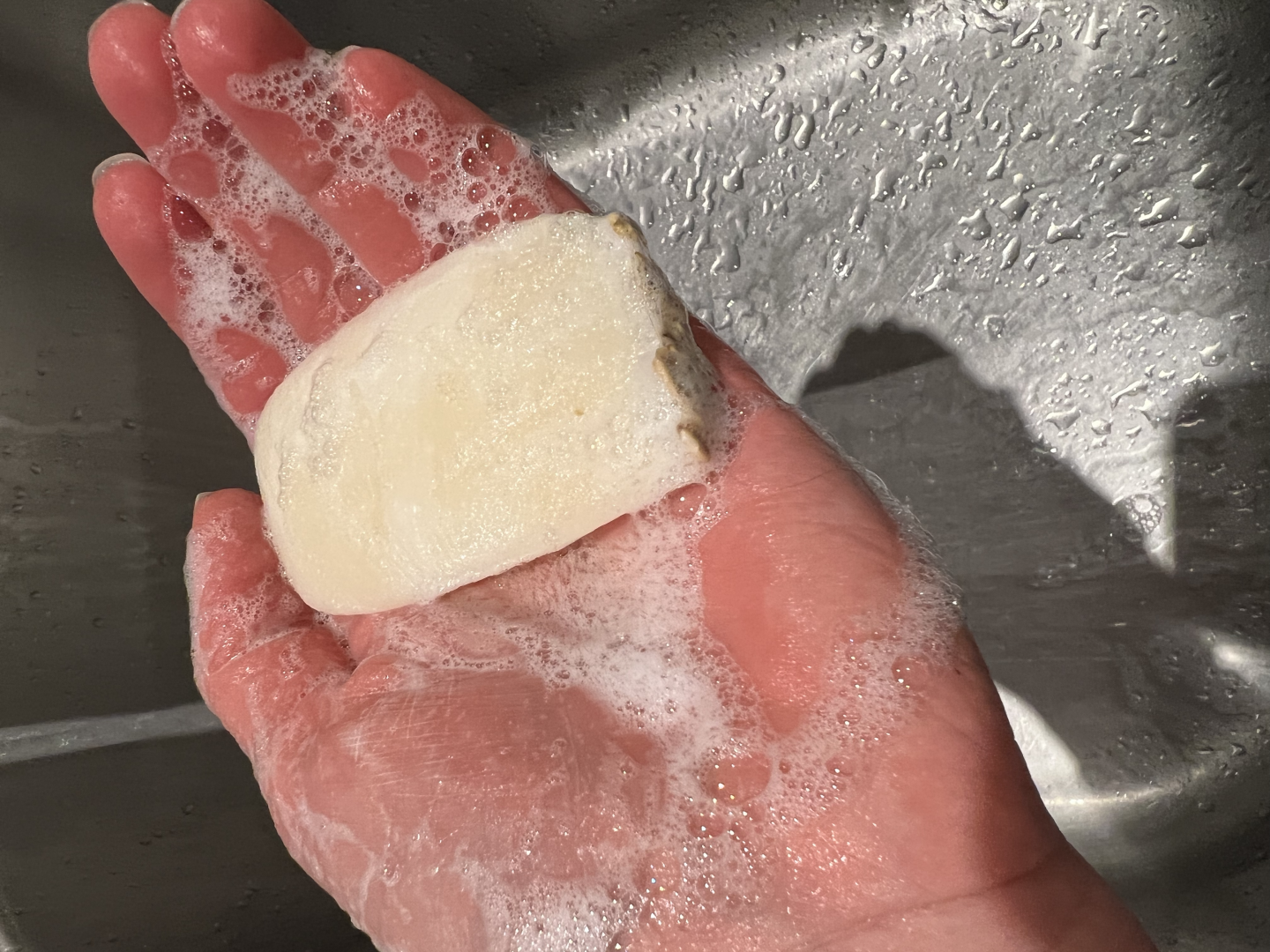 Salt Water Bastille:
Somewhat gelatinous lather, with fewer bubbles. Lather is creamy enough to be acceptable to use. These soaps are slightly brittle. Overall less slimy than the castile soap, but still visibly slimy lather. 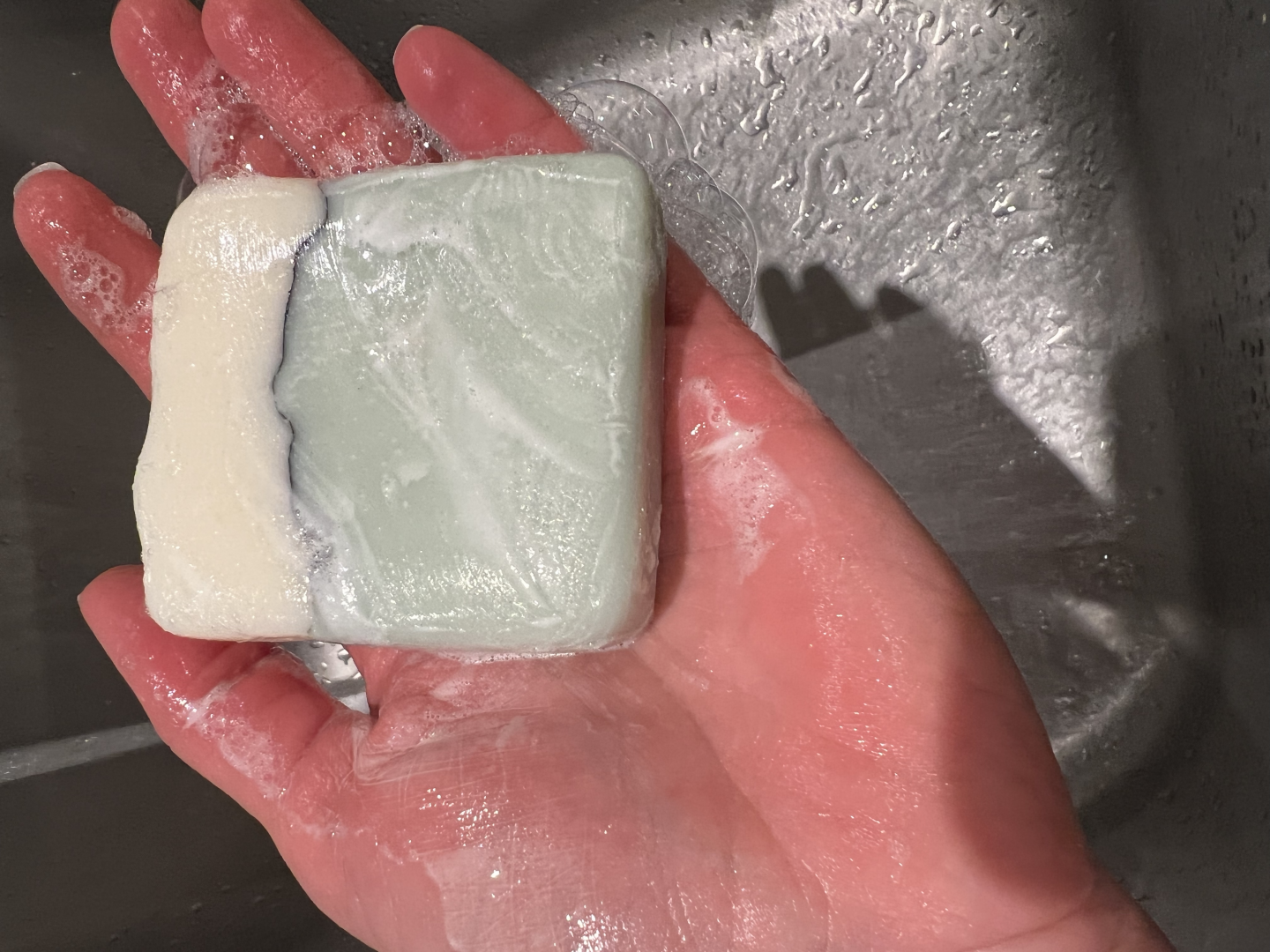 ZNSB:
Quite bubbly lather with only moderate creaminess. No gelatinous feeling or appearance of slime. Quite similar in both lather appearance and sensation to Bastille soap from 1/28/2021 despite being 1 week old. 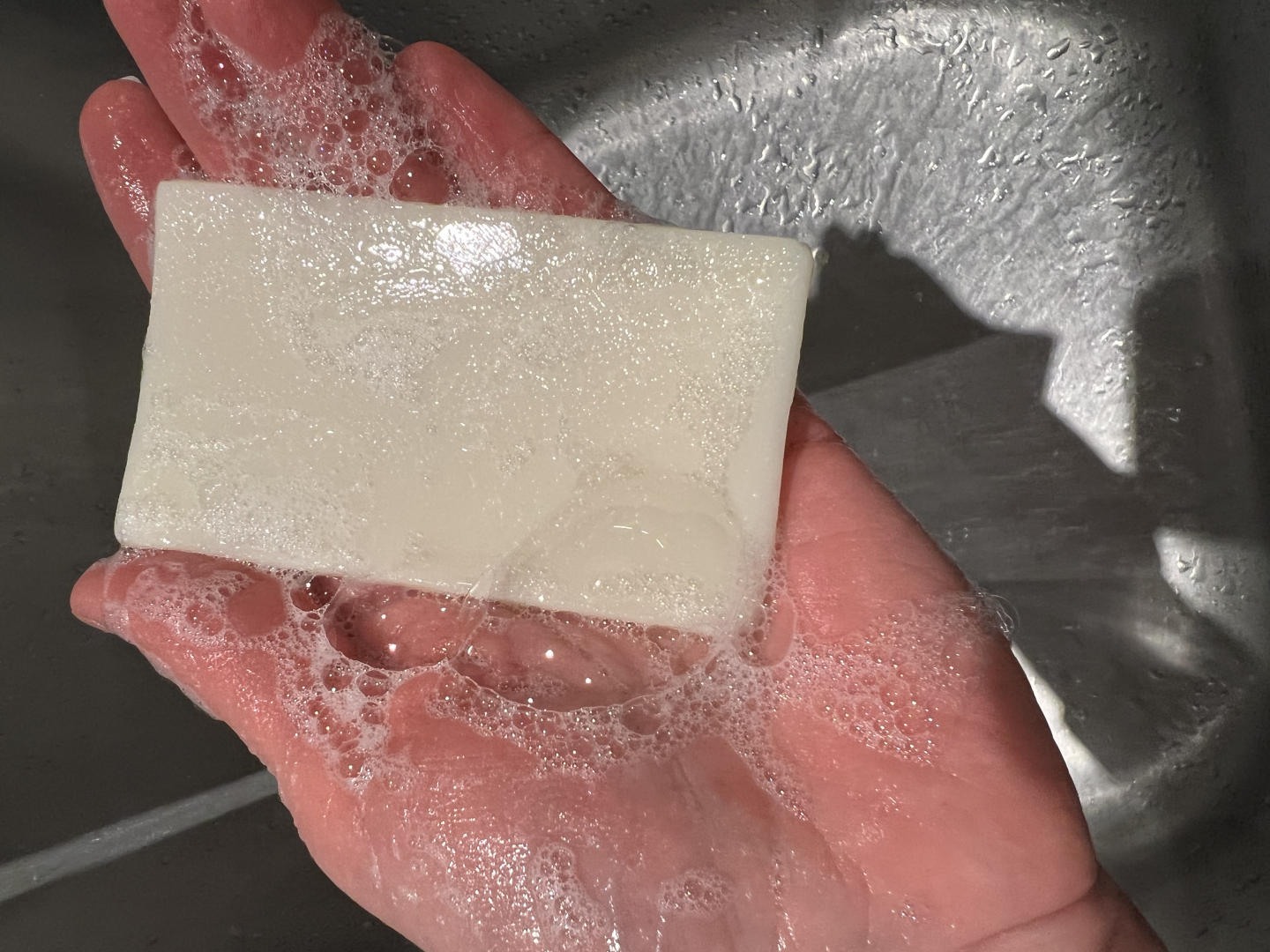 Will continue to update performance of ZNSB soap as it ages, but at 1 week it performs exceptionally well and and has only slightly less creamy lather than the one year old bastille soap.

And at two weeks: ZNSB A peek with different water or perhaps different lathering techniques. Here is my 5 seconds lather test of new ZNSC bar (tweak) so ZNSBastille with 15%CO & 5%castor. I do add sodium citrate @ 2% of batch due to hard water. 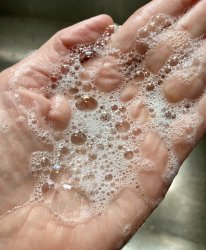 I’ll add that a 5 second test was HARD for me because typically I test with 10seconds. I had to redo 3 times!

I’ll add that a 5 second test was HARD for me because typically I test with 10seconds. I had to redo 3 times!

This simply is not a ZNSC bar. You have made a completely different soap. Maybe you added in some baking soda but some of us have done that in other recipes and salt brine additions are nothing new. Once you add in the CO, Castor, and a chelator you are going to cut the slime of the 100% OO soap.

I’m sorry I should have said Zany’s No Slime Bastille (ZNSB). I make recipe following the author’s directions, using her *tweak of 80/15/5 that’s mentioned in her original post. It is same oil % as @PepperJack used for this thread & their experiment/test….
@PepperJack said above “…Preliminary conclusions:

LynetteO said:
I’m sorry I should have said Zany’s No Slime Bastille (ZNSB). I make recipe following the author’s directions, using her *tweak of 80/15/5 that’s mentioned in her original post. It is same oil % as @PepperJack used for this thread & their experiment/test. To my knowledge sodium citrate is an additive that may be used as a chelator for soap use in hard water. I have hard water & can tell the difference between my ZNSB bars with & without the sodium citrate added.
Click to expand...

I realize the tweak but in my opinion, is not the true no slime recipe. But that is just me and no recipe for high OO soap is no slime. Yes, Sodium Citrate is a chelator as is Sodium Gluconate, and EDTA which is my preference. SC was not very successful for me which I did use for a few years before switching to an SG/EDTA combination.

@PepperJack Thank you for this excellent demo!!!

However, like it or not, I would prefer it if you would refer to it as "ZNSC" instead of "ZNSB" simply because it is a castile!

Allow me to explain...

Point of Clarification: Historically, "Castile" soap came into being based on the 100% olive oil soap made in the Castile region of Spain. Among a host of others like, "Kirk's Castile" (100% coconut oil) and Dr. Bronner's Castile (Water, Coconut Oil*, Potassium Hydroxide**, Palm Kernel Oil*, Olive Oil*, Mentha Arvensis, Hemp Oil*, Jojoba Oil*, Mentha Piperita, Citric Acid, Tocopherol. **None remains after saponifying oils into soap & glycerin. ), that came into being in the 60's, won the right to continue to call their soaps "castile" because the legal definition was determined as "contains no animal fats".

With the advent of the internet, and subsequently, the cottage soap-making industry, the terms "castile" (100% olive oil soap) vs "bastile" (at least 70% olive oil plus no animal fats) came into being about the time I started participating in online forums and groups (2004). They were strictly used there to distinguish one from the other as part of the soapmaker's lingo.

The nomenclature "bastile" does not exist in the open market. More importantly, it does not exist outside of forums such as this one. I can even remember when it was first used!

I thought it was me who first introduced it but, as serendipity would have it, several soapers, on different forums/groups started using the term at the same time!

@PepperJack Please don't be offended by my bringing this to your attention. It is merely meant to educate. I have no problem with you, myself, or other members referring to ZNSC as "the bastile version" within the text of the discussion. Afterall, as soapmakers, we know what that means.

Another batch of ZNSC complete
2