Zappy crystal soap tops (but the rest is fine)

I'm trying to solve a soapy mystery, and any help/insight you could provide would be appreciated! (see photos attached for reference)

Last night (~24 hrs ago at this point) I made two 5-lb loaves of soap using the same oil masterbatch. I used different fragrances and colorants (details further on). One of the loaves turned out great; the other loaf has little crystals on top that zap, although upon cutting the loaf, there are no visible lye pockets, and the rest of the loaf (sides, bottom, middle) does not zap. Only the top has the zappy crystals.

Here are details about my soaping environment and the "zappy top" loaf that might provide clues:

Within an hour of molding, I noticed the top of the soap had the strange crystal texture. I let it be overnight, figuring it was just heavy soda ash, but now it is 24 hours later, and alas the zappy nature suggests to me that perhaps it is lye crystals as a result of sweating, due to the humidity. Possibly a combo reaction with the high humidity + colorants/fragrance?

Also, it is remotely possible that I didn't stick blend enough, because I stopped after what I thought was a light trace in order to have as much swirl time as possible. Could the zappy tops be a result of not blending fully to trace?

Anyway, I am wondering-- since only the top is zappy-- can I simply cut the tops off, or should I rebatch entirely?


Thank you for reading this novel! I appreciate any advice.

Edited to add: Superfat was 5-6%.
http://www.soapmakingforum.com//www.pinterest.com/pin/create/extension/ 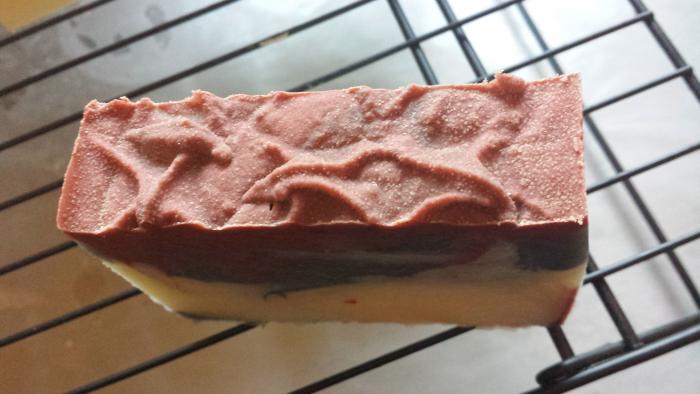 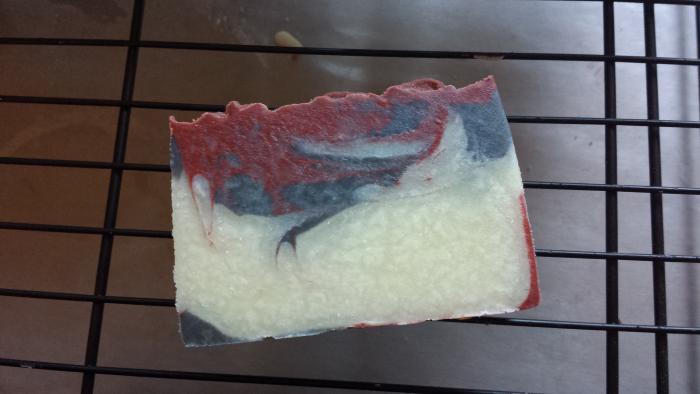 A couple of things off the top of my head. First, the one in the pic is a pretty soap, I usually don't like glycerin rivers but do in this one. It kind of looks to me like it will not be a problem after cure (ie; I don't see weeping/oil collection/other evidence of failure to saponify.) I'm not sure about the lye crystals, though, I might be a little afraid to leave them on there, although it will be less pretty if you plane the top.

Re the "master batch" formula, b/w the coconut, pomace and rbo, you have 60% of oils that are likely to heat batter. No need to talk about CO in that respect, but I have also found that to be true w/pomace and RBO, although I know opinions vary on RBO.

Plus you soaped at 120-130, and your RT is hot/humid, another factor leading to overheating. I am wondering if, in combination w/the other factors, the floral FO just sort of nudged it into overheating/lye crystal formation, which is why only that one had the issues? Also, did you CPOP/otherwise gel either or both? Obviously that would add to the mix.

It sounds like you've already thought about a number of these issues, though, sorry not to come up w/something more helpful ...
Last edited: Jul 30, 2015

Not_ally, thank you for taking the time to respond!

Regarding my "master batch," yeah, it does indeed tend to heat up. I have managed about 5 other batches from it (albeit with different fragrance/colorant combos) with success so far, despite the heating. With that said, I'm planning to adjust it slightly in the future to soap cooler, once I run out of the current materials anyway.

No CPOP-- just regular CP with insulation for the first 12 hours. I'm not sure if it gelled -- this is a new colorant combo for me so I'm not sure what it would like like gelled/not gelled. I did use a laser thermometer to monitor the temp of the top for about 2 hours after molding, and the max temp I saw was around 146F. Same story for the other batch. The colors seem pretty vibrant so I lean toward thinking that they gelled, but I am not 100% certain.
N

It looks like it gelled to me, too. Also, did you soap w/full water? You probably already know that will have made it more likely both to get the rivers (which is why I thought of it) and to gel, but sometimes you don't think of these things when you are looking backwards at what went wrong.
Last edited: Jul 30, 2015

Something I just noticed after coming downstairs from my soaping room, is that my soaping utensils, bowls, etc. from the problematic batch (which I haven't cleaned yet- I usually wait on them to more fully saponify) all have some of the crystals on them, which makes me less likely to think it's an issue of gelling/overheating in the mold. The mystery continues...

I suspect it's just soda ash. It can have a slightly salty-metallic-bitter taste that can be confused with a mild zap. I'd bet the soap gelled from your use of "full water", the intensity of the colors, and the presence of the streaking/mottling. In a humid warm place, it's pretty likely you're going to see some ash develop, especially on a soap in full gel. If you are really uncomfortable with the ash, just remove it. Either planing or rinsing with water will work. Otherwise, just let the soap cure as-is and forget about it.
Last edited: Jul 30, 2015

Yeah 24 hours isnt very long - I bet DeeAnna's right (she almost always is) and it's just ash forming. It might even add a 3d effect to the tops - if you dont like it just wash it off after the soap cures for a few weeks.
S

Looks like ash to me. I am going to third that one. And as the soap is just 24 hours old, it makes perfect sense.

DeeAnna, Seawolfe, and Susie, thank you for your feedback! I should clarify that I've done the zap test before on other soaps with soda ash buildup (although none as extreme/crystallized as this batch, if it is indeed soda ash), but no "zap" reaction as (I thought) I felt this time. Prior to yesterday, I had never been "zapped" so it's definitely possible that I could be wrong. The taste was indeed somewhat salty, although it was more than that...I don't know how to describe it other than "zappy." It did seem irritating to my tongue slightly, although it did not irritate my hand.

I did a pH test with the tester strips from Brambleberry by mixing into a solution with a bit of water, and it came back at around 9, for what that's worth. (I did this for a chunk of soap from the top, as well as from the middle of the loaf, both with similar results.)

I've got no problem with cutting the tops off. The one I tested cutting off actually looks pretty nice with how the swirls turned out.

Again, thanks to all for input! You've really helped to save (what's left of) my sanity. :mrgreen:

I'm attaching another photo that I believe shows the tops a little more clearly, in case it changes your mind on the soda ash. 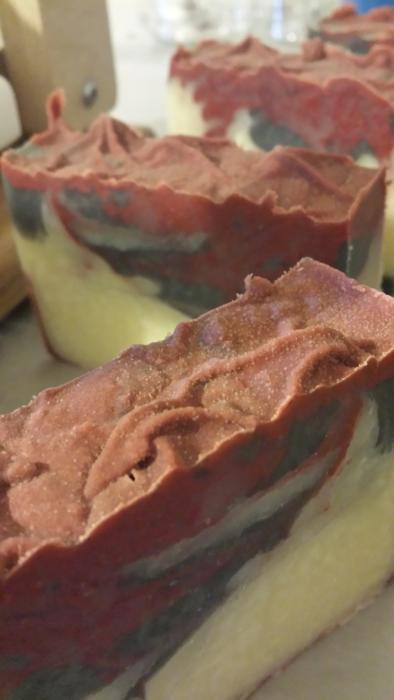 I'm still thinking its soda ash on a high-water soap that gelled during saponification. I'm pretty sure Auntie Clara has some photos that show this effect -- not sure where the specific photos are, but here are links to check out:

Regarding the taste of soap, the fragrance (FO or EO) as well as the soap itself can taste sour, bitter, salty, or metallic and this kind of sharp or unpleasant taste can give some illusion of zappy-ness. If you find yourself wondering, however, if you've been zapped ... it's not a zap. It might well be a strongly bad taste ... but it's not a zap. A zap, even a mild one, is unmistakable.

You weren't zapped - being zapped is a feeling, not a taste.
If you aren't sure if you've been zapped or not, you haven't

incognitocat2 said:
DeeAnna, Seawolfe, and Susie, thank you for your feedback! I should clarify that I've done the zap test before on other soaps with soda ash buildup (although none as extreme/crystallized as this batch, if it is indeed soda ash), but no "zap" reaction as (I thought) I felt this time. Prior to yesterday, I had never been "zapped" so it's definitely possible that I could be wrong. The taste was indeed somewhat salty, although it was more than that...I don't know how to describe it other than "zappy." It did seem irritating to my tongue slightly, although it did not irritate my hand.
Click to expand...

Thanks for those links! What an interesting experiment by Auntie Clara.... I'll be taking another look at my recipes in the future to consider reducing the water content, at least when I want to avoid glycerin rivers, etc.

Just to be clear, I understand that 'zap' is not a taste. I felt that I was zapped, but additionally could taste a bit of saltiness. As I mentioned, though, I had never been 'zapped' prior to yesterday's batch, so it's possible that I am misinterpreting the sensation. At the time I was sure I had been zapped (lol), but started second-guessing myself afterward during research.

Being zapped is like being in love - you know it for certain at the time, but when you look back you can start to doubt yourself!

I have been zapped many times, but there are still times when I get a feeling from an EO or some such where I start to wonder if it IS zap - if I could compare a true zap to this false zap, it would be night and day, so I totally understand the misinterpretation of the sensation.
You must log in or register to reply here.

What are these streaks?

What's going on with my recipe?

K
New Problems with every batch of soap
2