Peace
I'm new to soapmaking and am hoping to get some feedback on my recipe before trying it out.
30% coconut oil
20% shea butter
20% olive oil
15% Avocado oil
15% cocoa butter

It'll certainly make soap, but I'd find that much coconut oil drying. I'd suggest 15-20% coconut oil, with the rest added to olive. I'm sure others will be along shortly with more technical suggestions!

Have you put this recipe into a lye calculator yet?
A

Babyshoes said:
It'll certainly make soap, but I'd find that much coconut oil drying. I'd suggest 15-20% coconut oil, with the rest added to olive. I'm sure others will be along shortly with more technical suggestions!

Have you put this recipe into a lye calculator yet?
Click to expand...

I assumed It would be okay because of the butters and olive oil, I'm using the saponify apps lye calculator

Some folks might find 30% Coconut Oil to be too drying, but elsewise...try it and see if you like.

1) Pour your Sodium Hydroxide into your Distilled Water. NEVER pour your water into lye.

2) Make sure you run your recipe through a lye calculator...they are many to choose from.

3) Make sure you have an accurate scale and that you tare (zero your scale) when you put your container on it before weighing and in between ingredients.

This recipe is likely to trace pretty fast, and it has a lot of ingredients for a first soap. My guess is that you are trying to keep it vegan and palm-free?

If so, I’d go with Gecko’s suggestion and keep the first batch small. Let your lye solution and oils cool down to about 90F and use a 33% lye concentration at most. Superfat at 3-5% and cure it at least four weeks, although it will be much nicer at 8-10 weeks with all those butters and oleic.
A

Thank you all for the advice, I accidentally forgot to add the Avocado oil as I was rushing but it's already in the mold and there's not much I can do now so we'll see how it turns out. I'm now wanting to try a new recipe.
35% olive oil
25% coconut oil
20% Avocado oil
20% shea butter

Abigail 11 said:
Thank you all for the advice, I accidentally forgot to add the Avocado oil as I was rushing but it's already in the mold and there's not much I can do now so we'll see how it turns out. I'm now wanting to try a new recipe.
35% olive oil
25% coconut oil
20% Avocado oil
20% shea butter
Click to expand...

Are you saying you forgot 20% of your oils? Using the same amount of lye? I’m afraid that soap will not be safe, no matter how long it cures! If you actually forgot to add 20% of your oils, you can rescue the soap with a hot process method, and you can add the avocado oil as it cooks. I’m sure you’ll get good advice on other alternatives soon!

I believe the avocado oil was only 15% of the first recipe, but I 100% agree with @ScentimentallyYours that this soap is likely to be very lye heavy unless you were using an extremely high superfat. Please do rebatch it with the missing oils.

Abigail 11 said:
Thank you all for the advice, I accidentally forgot to add the Avocado oil as I was rushing but it's already in the mold and there's not much I can do now so we'll see how it turns out.
Click to expand...

Forgetting 15% of your oils will cause your soap to be lye heavy which is not good.

Instead of trying a new recipe, it would best to have a successful soap first.

This is what I did and still do when I make a batch from scratch.....

1) Using your soap calculator, input your oils/butters in order of melting: Cocoa Butter, Coconut Oil, Shea Butter, then largest to smallest: Olive Oil, Avocado Oil. Make sure you use a Lye Concentration of 33% and a SuperFat of 5%. PRINT. Eventually you'll have colorants, scents, additives and you'll want to include them in your recipe. ALWAYS print your recipe.

2) Make your Lye Solution first and put in a bowl of cold water in the sink.

4) STIR in your Lye Solution. Then take your stick blender and give the batter a couple of 3 second bursts and stir some more. It doesn't take long for 14 oz of oils to reach trace. You shouldn't need more that 3-3 seconds bursts.

Lisa at IDreaminSoap has a video on organizing the soap making process so you don’t forget oils. I just saw it last week and thought it was exactly what I need to avoid mistakes, even though I’ve been making soap for 20 years. (Yes, I am organization challenged!) On my printed recipe from the soap calculator I’ve crossed out oils as I use them, but Lisa‘s method is better. She has all of her ingredients on the right hand side of her soapmaking area. As she uses each one, she moves it to a tray on the left side of her work area. It should be safety 101 for those of us who are continually distracted.

@Abigail 11, whether the soap is safe or not depends on what superfat you chose with your saponify app Saponify soap calculator

I have not used that one and don't want to download a new app to my phone to see how it works or what the defaults it uses. But if it is like most soap calculators I have seen, it probably has a default 5%SF. IF the default SF setting is 5% and you did not change it, then yes, your resulting soap would be lye heavy as it would have a -10% SF. I'll show you how in the two calculators I most prefer:

So using Soapmaking Recipe Builder & Lye Calculator this is what I get for a 711 gram total batch size recipe (500 grams of oils), if I don't change any of the defaults other than to remove the FO, since you did not mention adding one: 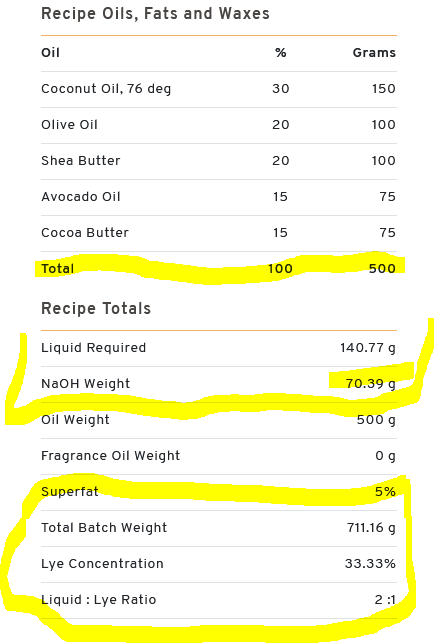 But if I leave out the Cocoa Butter, this is what I SHOULD use to get the same default SF & Lye Concentration: 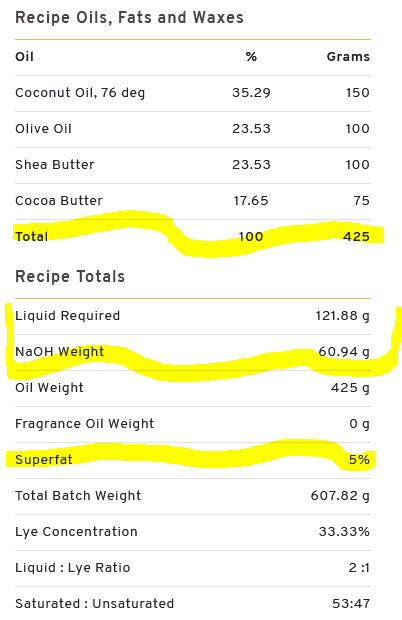 NOTICE: To maintain the same SF of 5%, the amount of NaOH drops 10 grams (or 13%), but we are assuming that since you did not REMEMBER the avocado oil, that you also did not go back and make the correct lye solution for the now lesser amounts of oils (in this example, minus the 75 grams of Avocado oil.)

So here is what I would REALLY get, if I just forgot the oil and didn't adjust the calculator: a NEGATIVE superfat, meaning the soap is lye heavy and really looks like this: 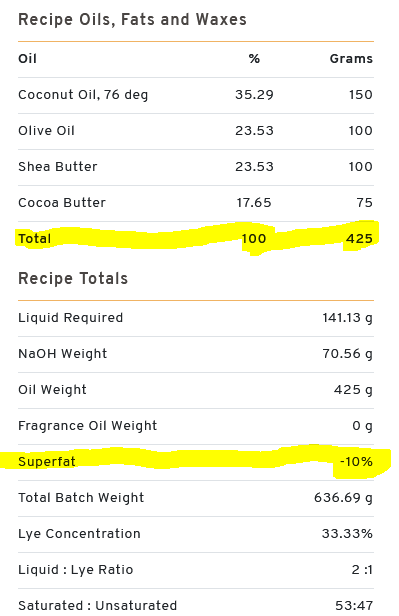 If I put it into Soapee.com and don't change any of the defaults except the FO (to zero),
The defaults look like this: 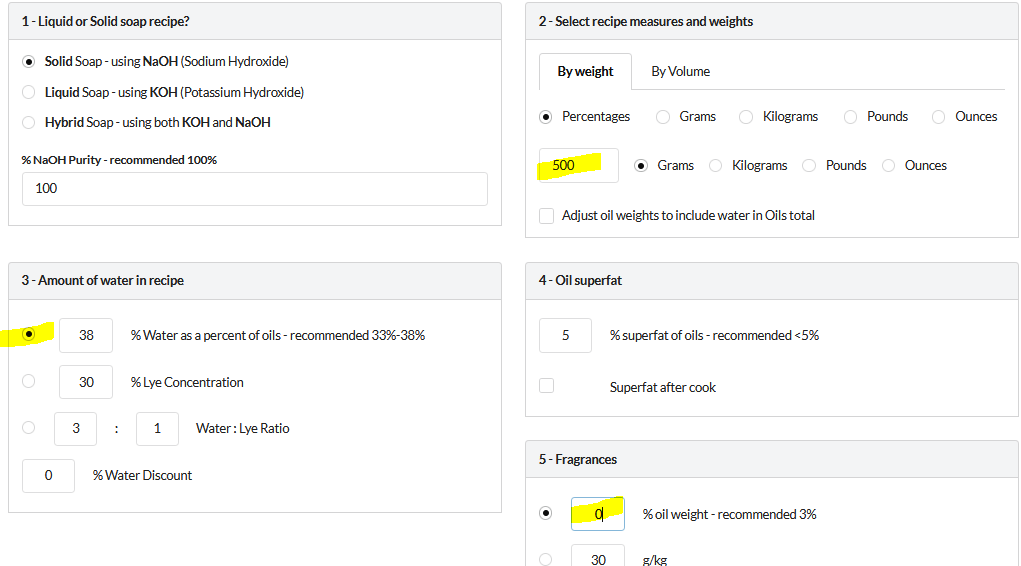 this is what I get: 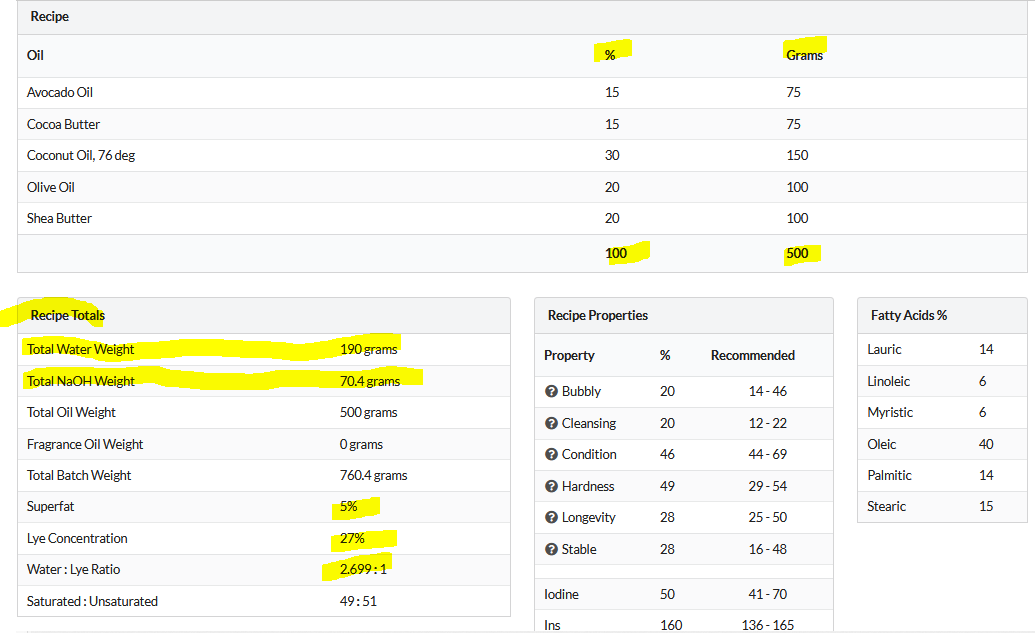 Notice the difference in default settings impact the resulting amount of water to lye ratio, but the amount of lye is the same (only water changes) in order to get the default 5% SF.


Here it is without the avocado oil: 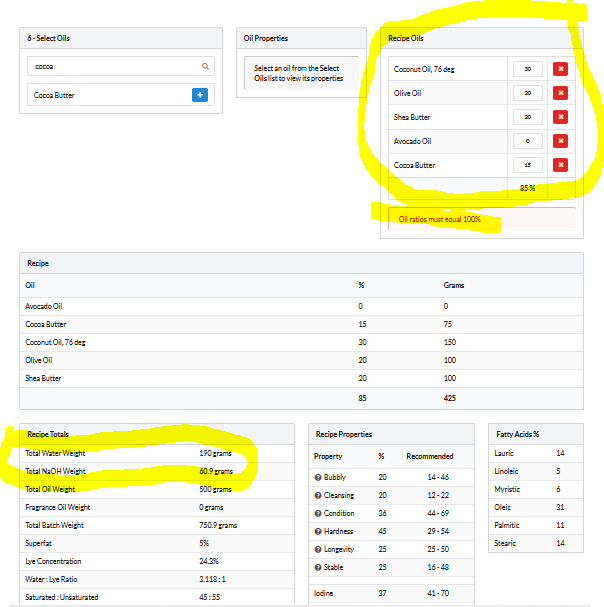 Notice the amount of lye goes down by 10 grams again, same as in the other calculator, in order to maintain the 5% SF.


BUT, assuming you used the original lye solution, this is what it looks like in Soapee with the REAL lye heavy -10 SF: 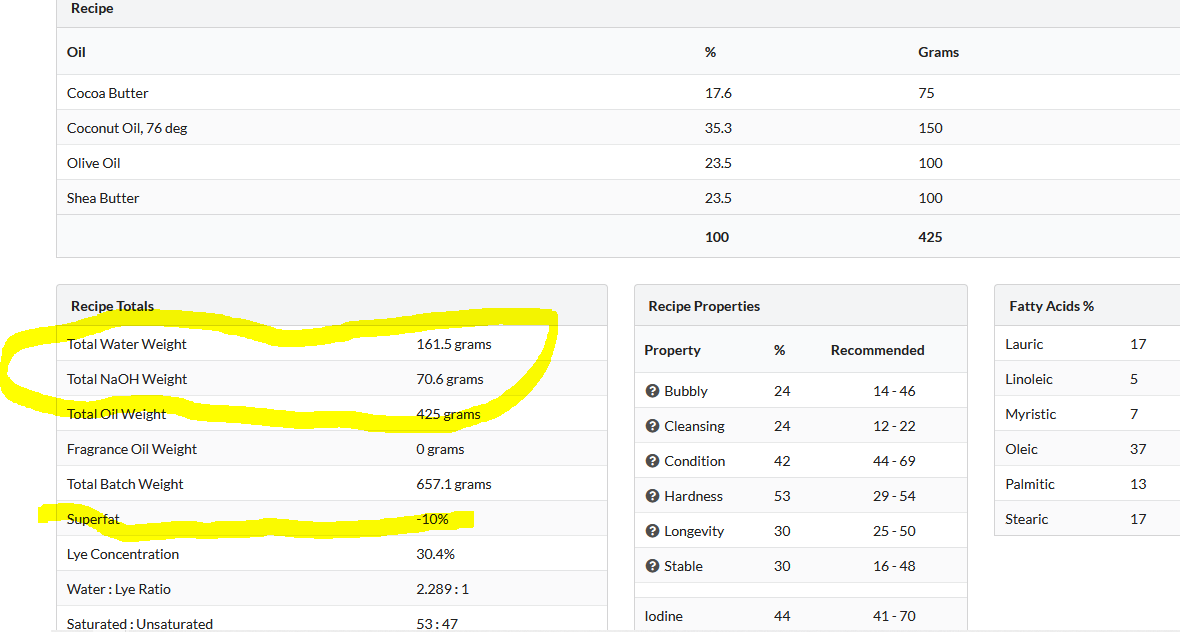 Now, you may wonder, how can I be absolutely positive this soap is safe or not safe? Do a ZAP test to determine that. Don't do a pH test with litmus paper because they are notoriously unreliable for testing bar soap AND tell you nothing about excess lye in bar soap anyway.

Here is a link on how to properly perform a ZAP test: How To Properly/Safely Conduct The Zap/Tongue Test


SOLUTIONS: As mentioned above, you can re-batch. Another suggestion rather than re-batching right of the bat, is to simply save this soap for now, label it as Lye Heavy AND keep the documentation with the soap in a box so you can look back later if you do want to rebatch, so you know what you need to make it safe.

Then make a small batch that DOES include all the ingredients.

IMO, it is better to make a soap success at least once (probably 3 times is better) BEFORE you start trying to rescue failed batches. Eventually, you can come back to this and try different re-batch methods (there are more ways than just to melt it and add the missing oil. But let that learning process come later. AND if you leave it until later, you can keep an eye on it and see how long lye heavy soap takes to get ashy and eventually change over time. Some lye heavy soaps are used as laundry soap or stain remover sticks, and some eventually lose some of the excess lye via a chemical interaction with oxygen, but that all should be left until later, after you have learned to make safe soap first.
You must log in or register to reply here.
Share:
Facebook Twitter Reddit Pinterest Tumblr WhatsApp Email Link