If everything goes well, I'll have a crazy little project to present here in a few days. So far, I came up with this question during recipe design. Just as in NaOH-based HP for solid bar soap, it is totally possible to not add all the oils to the KOH soap batter in the beginning, but distributed over the cooking process. In general, one would gain nothing from this, since all the oils have to be saponified in the end anyway.

BUT I wonder if there is an exception to this. When the KOH purity and/or SAP value of the oil(s) are in doubt (think of self-rendered lard, or canola/sunflower frying oil blends of unknown proportions), one might prefer a mild lye discount over a lye-heavy product, to be on the safe side. However, we know that substantial amounts of unsaponified matter in LS are generally a bad idea, since they will settle at the top as an unsightly and rancidity-prone cloud layer.

When this happens, the precipitates are (obviously) less dense than water/soap solution and sufficiently hydrophobic to not stay soluble/emulsified within the bulk solution. My idea: castor oil maybe is neither. For once, it has the highest density of all oils (0.96 g/mL rather than typ. 0.92…0.94 g/mL of other vegetable oils), and ricinoleic acid has nifty extra hydroxyl groups that can bind to water (as they do with ethanol, with which the triglyceride is easily miscible), so might also act as solubilisers for partly cleaved fat molecules in aqueous solution.

So, my four closely related questions/discussion stimuli are:
Integration of a late-castor stage might be as easy as cooking a lye-heavy HP paste from the KOH and the non-castor oils. Once that soap passes the clarity test (NOT zap test), add the castor oil for a second (but much shorter) cook, or none at all, for a day or two of curing in a CPOP spirit. That's it.


tl;dr: Knowing your KOH, oils, and scales well enough to formulate a sound LS recipe in the first place is of paramount importance, and no deferral of castor oil addition will ever change this. But if, and only if those prerequisites are, for whatever reason, not fulfilled, castor oil might be an elegant loophole to control the origin and properties of unsaponified excess oils.

No discussion is necessary. Try it. Let us know if your theory holds up.

For sure I'll do, as soon as I'm in need for more LS (which won't be anytime soon, though…).

As of now, I have a single data point: a pure castor oil LS that I had made several months ago, as kind of a combined masterbatch for castor oil and KOH lye (for oleic snot suppression in bar soaps). It is made at 5% lye discount, has not gone rancid AFAICS (no discolouration, no smell, no separation), and it passes the clarity test. This is not very strong evidence, but better than nothing, it goes in the right direction.

FWIW: I've been making LS since 2004. As I am fond of saying, there are about as many different ways of making LS as there are LS'ers! I currently soap at 0% SF (lye discount) because I want to saponify as much of the FAs as possible. I'm OCD about clarity (except for lard). I've never used castor oil in LS. I can't help but wonder if I'm missing something.

Well. If LS with 5% lye discount stay transparent, what if 10% stays transparent too? With the 20%, I'd like to force some residual turbidity, to see if it rises to the top, settles at the bottom, or just stays in a stable emulsion and adds opacity to the finished soap in a controlled fashion (which might be desirable in some cases).

Castor oil is just a totally different kind of oil than all the other oils, so we have to check our beloved experiences.

Hmm. I had that diluted castor paste, which was clear at 5% SF (negative zap). Now I've added another 4% ppo plain castor oil. The solution went turbid initially, but cleared up after a few hours! I'm really excited now.

I'll wait for the foam to settle, and castor oil in small steps until it stays turbid, and then post some photos here.

Finally! I was about to lose patience when the solution cleared up after two additions, but eventually some turbidity remained.

Details: I started from a 5% lye discount soap paste diluted to become liquid (first photo: 36% soap absolute, consistency about as runny as an ordinary vegetable oil). I added 3% ppo castor oil, and it dissolved without turbidity (second photo). Another 3% ppo addition later, the solution initially stayed opaque, but once again cleared up upon action of an ultrasonic bath for 2 hours (third photo). Finally, I lifted the castor oil addition by another 5%. Four hours of ultrasonic kneading did not fully dissolve the oil droplets (fourth photo).

Time for a wrap-up of this experiment. I let it stand over night, and now the surplus castor oil has combined to opaque droplets (see photo). The soap itself mostly cleared up meanwhile.
I gave it a shake and tried out its bathroom performance… well, we all know that pure castor oil soap is disappointing. Literally zero lather, very sticky (even after rinsing off), and rubbing my hands against each other felt and sounded (!) like wet rubber. Eww. For now I'm done with all-castor soap. 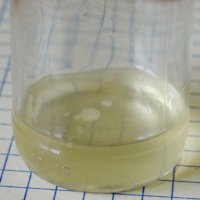 PS: Slightly differing percentages during this trial are only partly due to my sloppy math, but also because I switched superfat calculation from initial to saponified oil input somewhere within my notes.

ResolvableOwl said:
Literally zero lather, very sticky (even after rinsing off), and rubbing my hands against each other felt and sounded (!) like wet rubber. Eww. For now I'm done with all-castor soap.
Click to expand...

Sorry it didn't work out for you. Truth be told, I really didn't get it. Lesson learned. Time to move on.
G

I don't make LS so I don't have a horse in this race, I'm just fascinated by the science- what about a 99% coconut oil soap, or whatever actually makes nice LS, then 2% castor? Or has that experiment been tried already, and my brain just missed it?

@Zany_in_CO: I consider this lil' experiment a full success! I wasn't surprised that a 16% superfat castor-only soap comes out awkward. Honestly, I had expected this a lot earlier.
Maybe this answers my initial question: “Why isn't everyone adding Castor oil late in hot-process LS cooking?” – Because castor is no silver bullet that allows you to be sloppy with LS recipe math! Castor can do impressive things, but dose wisely, since it also can ruin your recipe. My part was (and will be) to clarify how it can ruin your recipe.

@GemstonePony: Am I understanding your idea correctly that you propose to superfat LS with castor? That was essentially my initial question, and I'm still wondering as well if “my brain just missed it”.
2% of (nearly) anything wouldn't make a lot of difference at all, just like with solid soap. It's about the typical tolerance of KOH purity, and what common LS recipes withstand with arbitrary lye discount/superfat anyway. My point/question/discovery was that with castor, you can exceed this “unwritten law” to some extent, without impairing clarity (the impact on skinfeel needs to be tested separately).

This is just me but I believe superfatting soap is useful for hard bars, not LS. In my experience, you actually risk flattening the lather if the SF is over 3-4%. I have the best results with 0% superfat. Using emollient oil(s) as part of the formula results in the skin friendly soap we all love.

I see you are fairly new to the forum. You may want to check out these links:

@ResolvableOwl yes, thank you clarifying! I think we're on the same page as far as the results and implications.