What would happen if we saw this today?

I remember using this soap... 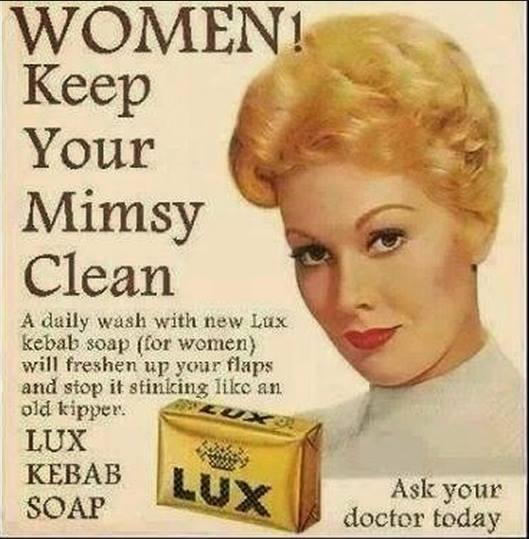 Hahahahaha!!! Seriously? Stinking like an old kipper? And I thought some of the modern day commercials were TMI!

"Old Kipper" sounds like an intriguing FO. Someone needs to get on that. It would be great as a gag gift!

Gee with such an enticing ad...ya gotta wonder how they marketed to men?

True confession time - I'm surfing SMF in between parent-teacher conferences tonight and this ad made me choke on my tea. Just glad no one was walking into my classroom at the time. Freshen up your flaps! LMFAO!!
C

it's the word kebab that's got me....to say nothing of how much of a can of hairspray is left after 1 usage with a 'do like that?

Oh this is funny!! I wonder if I should worry more about my Mimsy - maybe no one wants to tell me it smells like an old kipper.

There is no way an ad like this would have been allowed to be published. It has to be a spoof. It's definitely a pretty funny spoof!

In 1899 Lux first appeared in the UK as Sunlight Flakes, but the name was changed in 1900. It was introduced in the USA in 1916 as a laundry for washing delicate fabrics by hand.

In 1924 and 1925, Lever Brothers tested “Lux Toilet Form,” a white perfumed soap, and Olva, a green palm oil toilet soap. Olva was a round bar packaged as specialty soap. It was tissue wrapped, then placed into a carton that was overwrapped. The graphic design showed a beautiful lady drawn in an art deco style of the times. The claim “Super-creamed, made from vegetable and fruit oils” was ahead of its time. Lever looked at the market and thought that there might be a world potential for popularly priced, white, milled toilet soap. Cashmere Bouquet was a luxury item, Palmolive, the market leader, was green, inexpensive, and milled. At the time, no popularly priced, white, milled toilet soap existed. Lever spent two years searching for the right bar size and shape, the wrapper style, and the most preferred fragrance.

Consumers tested 40 different perfumes and eliminated 35 of them. Once Lux and Olva were launched, the preference for Lux was immediate and Olva was abandoned.

Lux, the Latin word meaning “light,” was short, easy to remember and to pronounce in almost any language, a name that also had the advantage of sound association with “luxury”. It is possible that a Liverpool trademark and preferred agent W.P. Thompson, who suggested the Sunlight name in 1884, might also have suggested Lux because of the association with light.

The first advertising for “Lux Toilet Form” appeared in newspapers in April 1925, and the copy read, “Now made just as France makes their finest Toilet Soaps/Ask for Lux Toilet Form today.” In early 1927 the name was changed to Lux Toilet Soap and magazine advertising, combined with large scale sampling, began. The comparison to “French Soaps” was combined with an added economy note: “Yesterday…50¢ for a French Toilet Soap/Today…the same luxury for…10¢.”

In 1928, the “talkies” (talking motion pictures) were being developed and the use of Hollywood movie stars and directors as endorsers was introduced, one of the most successful soap marketing ideas ever used.

More personal testimonials followed endorsed by practically all the Hollywood stars who signed up to testify or testified to the virtues of Lux Soap, Lever never paid any star for their endorsements.

Since 1929 when Lux was introduced in India over 50 leading Indian stars endorsed Lux soap. The first star was actress Leela Chitnis.

During the 1930s and 1940s, many black and white Lux beauty-related and in the 1950's onwards color advertisements were used in many magazines.

Some of the slogans were: “9 out of 10 Screen Stars are Lux Girls!”, “Be Lux Lovely”, “You're beautiful! You're adorable! You're lovely ! You're irresistible!”, “To him you're just as lovely as a movie star”.

In 1957, in addition to the white Lux in gold foil, four new colors were introduced: pink, green, yellow, and blue. Few people remember the unique looking Lux advertised in 1962 as “Like no other soap in the world New Lux with three deep beauty bands. Now three beauty bands go deep into new Lux. Its moisturizing creamy lather says: forget your dry skin worries.” There were two gold-colored bands on the face of a white bar and one gold band in the middle on the back. This bar predated all of the multicolored products that followed years later. In the United States, Lux has become an economy bar. In 1987 Lux was repackaged and was called the “The Pure Beauty Soap.” By the mid-90s, Lux was removed from the U.S. market. It was redesigned and relaunched in recent years with traditional and new positioning as well as new packaging.

I also say 'spoof' to this. I don't know when the word kebab became a reference to lady bits, but it wasn't in that era!

That explains why I can only find it in some stores. This ad beats many today's ads hands down.

That gal looks an awful lot like Kim Novak in Vertigo.

I think it was Kim Novak. Like Grace Kelly and Candice Bergen among others, she may have been model before she made it as an actress.

DeeAnna said:
There is no way an ad like this would have been allowed to be published. It has to be a spoof. It's definitely a pretty funny spoof!
Click to expand...

The person that found this ad states her husband who collects old publications found it. The expressions are typical british, so I don't think it ever hit US soil but I do believe it is for real.

Kebab is a term for lady bits? o.0

How does that even make sense? Kebabs have sticks. I'm confused.

rparrny said:
The person that found this ad states her husband who collects old publications found it. The expressions are typical british, so I don't think it ever hit US soil but I do believe it is for real.
Click to expand...

Or do a google search for "lux advert Kim Novak" to see the actual advert.

'Kebab', 'flaps', 'stinking like a kipper' - these are vulgar British terms that would not be used on a advert for anything at that time, let alone a product like that. It would be like having an advert today saying "hey women, wash your stinky c*** with this great soap"

I stand behind my opinion that this is a spoof, especially now that The Gent has found the original ad which contains much more appropriate language as an ad.

The spoofed version is amusing as an off-color joke, but it's definitely not Good Advertising. I certainly wouldn't buy a product if this was the way it was advertised, nor would I (if I were Kim Novak) have allowed my face and reputation to be associated with crude language of this nature.

Well I've searched high and low for an answer...it is Kim Novac and I have seen the original ad but the company often changed the wording of ads for the european market. The ad is all over the internet, but nowhere do I see anything that debunks it. Usually a photoshop fake will have clearer lettering, not to say it can't be done. Lux is no longer sold in the US (caress soap took it over).
I will say that doing this search I found european ads that made this former Marine blush. I would love to know one way or another.

Have you read the text under the two top pictures?

With no publication no one can easily prove one way or the other. But trust me, this is utterly fake. I know that Americans usually have a weak grasp of other cultures, but this is just shocking