PKappy said:
These look great! Do you line your PVC and if so has it affected the pull through?
Click to expand...

I do not line my pvc. My first 3-4 batches I smeared a little Vaseline inside. But I don’t need to anymore. I put them in the freezer for 30mins-1hour. Take them out and wait 15 minutes until they start to sweat. Then they slide out so fast I have to catch them and make sure they don’t get smashed on the floor!

Had to cut em quick before work. Will take better pics later. That green often morphs. I’m hoping it brightens up!

TashaBird said:
Any recs for a tape that’ll stay put? This is electrical.
Click to expand...

Gaffer’s tape sticks really well on dry surfaces. I think it would stay put even when it gets wet. It just doesn’t adhere to a wet surface.
Last edited: Sep 17, 2021
M

Tried my hand at the one pot wonder last night (first time). Scented in rosemary mint. Cut today. Not the result I was hoping for. Two of my greens look the same. My white set up too fast as well. Plan on trying again tonight.

Megan said:
Tried my hand at the one pot wonder last night (first time). Scented in rosemary mint. Cut today. Not the result I was hoping for. Two of my greens look the same. My white set up too fast as well. Plan on trying again tonight.
Click to expand...

That is very lovely soap! Congrats!

Just prepped for a session tomorrow. I brewed double-strength coffee with distilled water, and calculated my essential oils. It's another gardener/mechanic soap per my bro-in-law's request. He's a tough guy but needs my soap and lotion bars. I'll do 2 loaves, 1 for me, 1 for him.
I'm going to live life on the edge and up my normal 5% red palm oil to 10%. It's taking forever to use my jar of it, plus I think it'll look good with the coffee.

Zing said:
He's a tough guy but needs my soap and lotion bars.
Click to expand...

He's clever to know what's the best, and tough enough to dare request it from you.

I made a batch of ZNSC bars last night with 90% OO+10% castor oil & just a skosh (.7 of the 1.7 H2O/lye ratio) of goat milk. Forgot & accidentally used a fragrance oil blend that when purchased was thought to be

. Had to pour, plop into mold super fast. However, I just cut the loaf & there are very few air bubbles visible & they smell divine.

I made soap today!

It's a challenge attempt so I won't post pics, but I suspect another attempt will be needed. I had everything laid out before I realised that the red mica I had been planning on using was all gone, so I had to improvise. I was aiming for a dark rose red and I managed something like raspberry with what I had on hand. On a whim, I added some used (dried) coffee grounds to try to darken it, but I didn't account for how it would look in the batter... Basically like raspberry jam!

My brain is refusing to accept that the fragrance (smoky orchid and cacao) is coming from such a fruity-looking ensemble. So I suspect in a few days it will be back to the drawing board!
F

Okay, @Ford and all the other neem oil users! What is the deal?! I always get caught off guard when neem is mentioned on this forum. I am a gardener and use neem oil on my flowers and shrubs. And I'm not too keen on the scent and am glad that I use it outdoors. What does neem do in soap?
F

mmm, not sure yet. But I'm a gonna find out.... more reading, searches, and more reading... then to the calculatooooorrrr......that's what Alice said as she fell down the rabbit hole.

Today I ran a table at a fun church event making melt and pour soap, with a water/fish theme. Other tables were doing a variety of other craft activities.

Everyone got to choose a recycled plastic pot as a mould, then added their choice of imbeds like MP fish & shells, small rubbery fish toys, rubbers (erasers), cosmetic glitter etc. I had a prepped a slow cooker of clear MP, scented with lemongrass which everyone loved. For the kids, I ladeled it into their mould once they'd placed the imbeds and put it straight to the side on top of their name label; the adults had a choice about that part.

By the end, (there was a Bible story and some songs & prayers after the crafty activities) everyone's soap was set up enough to take home (in their handily recyclable mould), though some were still a just little warm. I gave them instructions for unmoulding, and said to wrap it in cling film if it wasn't getting used immediately. I think it was popular!

Zing said:
What does neem do in soap?
Click to expand...

Another gardener here. I keep wondering if I can wash with Neem soap *before* gardening to keep the bugs away.

I think I have some old old old Neem oil insecticidal soap downstairs that I tried on my roses. Never thought to try it on skin.

Misschief said:
Back off.... seriously. You're most likely too close to the bars.
Click to expand...

I made my second attempt at the challenge today, which turned out to be fun because I had my friend do part of the pour. He had no idea what he was doing, but I directed him. Which is super cool because he is part of the story behind my inspiration soap, so it is extra special now.

So...no matter what this second attempt at the challenge looks like, it is being submitted. But I think its gonna be fine. I just held his hand during the pour.

I’m testing FOs and made this soap with NS Afternoon Tea. It smells good and behaved well. I hope it sticks around. I ended up with my first ever unintended “rivers” due, I think, to using more water than usual. 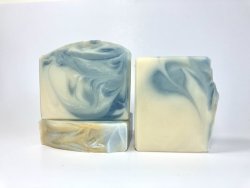 My soapy thing today was making soap!! I made two loaves of my gardener/mechanic soap for dirty gardeners and mechanics. I'm not crazy about the color -- brewed coffee and red palm oil, but it smells good with lavender, peppermint, and basil essential oils, plus 3 exfoliants. Lord knows I love my fancy soaps and swirls, but it's also nice to make a soap with no dividing or color prep and just dump everything into one pot. The one hiccup was not having any poppy seeds -- jeez, seriously, my inventory guy is on my last nerve, he's got to go!

ResolvableOwl said:
Am I too stupid for glycerin rivers?
Click to expand...

(More on this when I'll have decided to take part or not in the monthly challenge.)

Had a great market today! Super pooped! Mountain of dishes gonna have to wait until tomorrow.

Zing said:
Okay, @Ford and all the other neem oil users! What is the deal?! I always get caught off guard when neem is mentioned on this forum. I am a gardener and use neem oil on my flowers and shrubs. And I'm not too keen on the scent and am glad that I use it outdoors. What does neem do in soap?
Click to expand...

I know the answer, you guys!

Because of its antibacterial/antimicrobial properties it's very good for acne prone users. It helps decongest pores, hydrate, and sooth irritated skin. I just made some acne soap for my sister that is 16% neem. It be ready for her to try in about a week. Just a tip, the neem does give the soap a smell (I thought it smelled sort of like coffee), but it did fade and become nonexistent after curing.

Cut my spicy chai soap. Next up I’m going to make “Winter Woods” I just have to decide on a color scheme (I know it will involve green)