What has happened to my goats milk soap?

Hello, I'm wondering if anyone can tell me what has caused these "bits" in my cold process goats milk soap?

When I went to turn it out of the mould, it had a few little white "bits" on the surface. When I turned it out, the bottom had LOTS of these little grains, and bubbles. I looked at it a bit later on, and some of the bubbles were producing liquid, almost as if it was sweating. Any idea what could cause this? Pics to follow.

Insulated so that it gelled all the way through

I froze the goats milk, then added the lye slowly, sprinkling a bit on and then scraping away the slush. I was a little worried about taking *too* long though, as I have read about the fats in the milk starting to saponify before it gets mixed into the oils, so there probably were a few ice crystals left, but I thought these would melt with the heat of the oils. They were warm but not hot, maybe about 60 degrees F. I did check the temp, I just can't remember now what it was.

Any clues as to what I might have done, and if the soap can be salvaged? The pic shows what was at the bottom of the mould, this is the worst part, but there are bits all the way through. *Sigh* And I was so pleased about not scorching the milk this time...

Any more info I need to give? 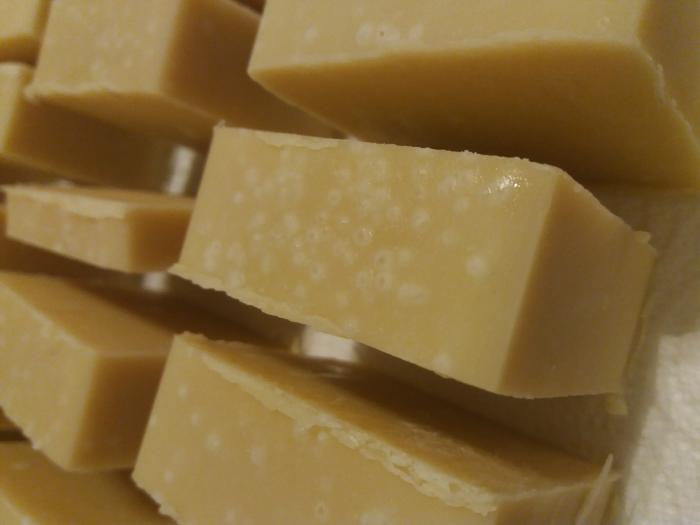 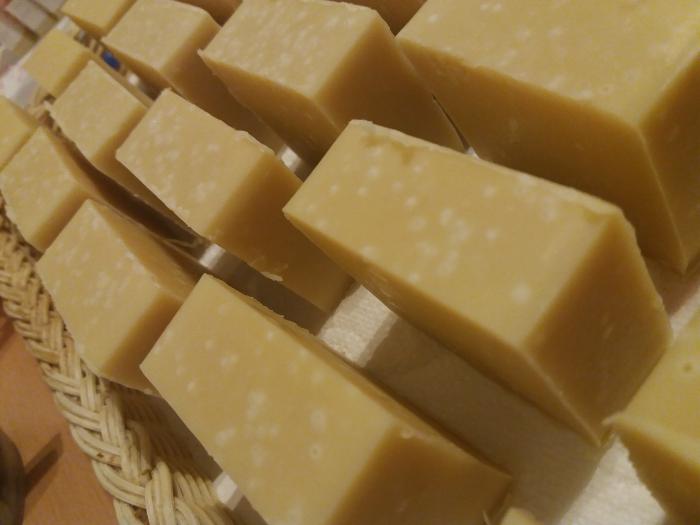 The leaking is most likely caused by overheating in the mold and the white specs are stearic from the shea. That is a lot shea in soap

I agree with Carolyn. Also, Milk soap with full liquid and high CO will gel without insulating.

Thank you both - I've learned something about shea today The recipe was an internet one, I was aiming for a good palm-free GM soap - I'll keep trying, unless someone would like to make suggestions?

I just wanted to make sure it gelled to the edges, as I've made GM soap before (different recipe) and it only gelled in the centre, and left a big obvious circle in the middle. That said, it wasn't in a wooden mold last time. Another lesson right there!

Thanks again for taking the time to reply

I use the split method where you mix the lye with 50% of the water and use the other 50% as milk. If you want 100% milk add milk powder to the Gm portion.

Both shea and CO can produce those spots or it could be unmixed GM.

I find I have to heat the CO and shea pretty high to keep them clear and then mix them really well into other oils that are also warm to make sure they mix well.

I CPOP and cover all my soap including GM but I turn the oven off when soap goes in and I use a thermometer to ensure it doesn't go over 100*C.

Thanks Penelopejane. I didn't heat the liquid oils, so maybe the shea and CO didn't mix well.

I use milk from a farm that's just a few minutes away from my home, I don't even know where I'd be able to buy powdered goats milk round here, I've never seen it. (But then, I've never looked for it.)

i get my GM powder from Amazon: https://www.amazon.com/gp/product/B004K69OMU/?tag=skimlinks_replacement-20.

I've seen it in grocery stores, but normally they seem more expensive.
Last edited by a moderator: Oct 23, 2018

The moisture on the surface has crystallized. I sliced off the worst part, but there are a few tiny pockets of liquid inside the bar, too.

I also now know what a Zap feels like, although I did test the freshly cut side, I'm not sure if this makes a difference.