What did I do?

I hope the pictures come through (tried to attach file directly).

Anyway, I made some infused oils (eight 5 oz olive oil jars each a different botanical) way back in about July and they have just been sitting around not being used. So I decided it was time to do something with them. But I didn't want to make a bunch of small batches.

So after calculating several times, I measured out five lye solutions, each 33% and four of them with a botanical in the lye (later strained out) to enhance the color. There was also a little sugar and salt in the lye.

At this point, I had five mini-batches of soap, about 18 ounces each, though some were slightly larger than others. So I mixed them up, plopped them in the cat litter box mold (lined with a trash bag) and it looked like black and orange blobs. But a day later, the colors showed up--pink, yellow, green, purple, and blue. Great.

It sat in the soap room, which is kinda cold (around 60 degrees) so I doubt it jelled, but that's OK. The next night, I cut it and noticed two things.

1) Some of the soaps sort of didn't want to connect up with the others (and not the indigo one--some of the identical-except-for-botanical olive soaps). They looked like jigsaw puzzle pieces

2) One of the olive oil soaps (the green one) has a strong ZAP while the others are fine.

Now, I know that the standard answer for the ZAP is "lye heavy," but I checked and rechecked and with a 5% superfat and usually accidentally adding more oil than is in my formula, I should have had plenty of leeway there.

Any ideas why some of the identical soaps would not want to join together and why one out of five colors is so far behind the curve in alkalinity? 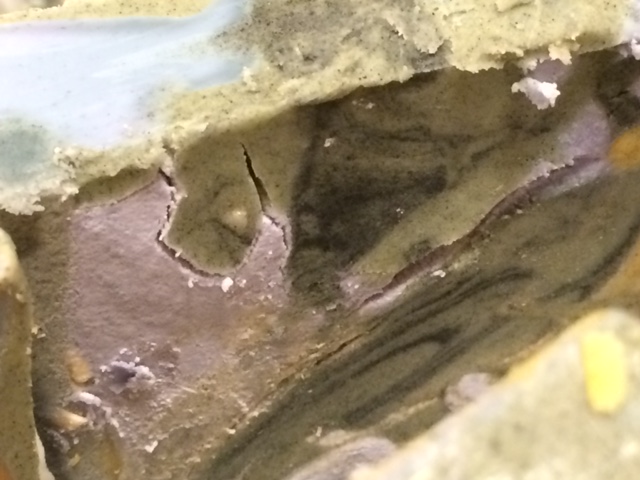 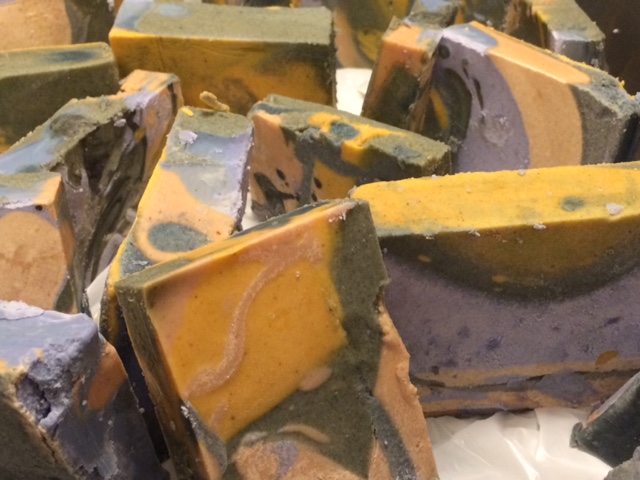 I wish someone with more experience had an answer for you. I am curious.

One thought I have is this, with so many batches going at one time, is it at all possible you may have added too much lye solution to one of them? But then if you double added to one, that would mean another one would have received none and then it wouldn't trace, so maybe not.

How did you add the botanical to the lye water? As powder, solid leaves, etc.? Another thought is this, perhaps when straining out the botanicals from the lye water, you lost some of the lye from some of the solutions (along with the particulates - the strained materials) and ended up with un-equal lye concentrations of some of your solutions. I'm thinking that could account for uneven zap results. Also it could contribute (I think, but don't know for sure) in some of the separation.

Actually the separation obvious in the second photo reminds me more of something like too much dry powder in one, but then it doesn't sound like you used any dry powder in your soaps. Maybe the lye solution in grey-ish colored (on my monitor it looks grey-ish) soap was thicker with a powder? If so, I'd consider that as a likely contributor to the separation.

Your soaps look fairly soft to me and I wonder if perhaps your lye concentration really is 33% in this soap. How old is your lye? Is it perhaps not really as pure as you have it set in your lye calculator? Another thought is your scale. How accurate is it and have you calibrated it recently? With such small batches of each soap and solution, accuracy of your scale is really important. I have two scales, a larger one with accuracy to 1 gm, and a smaller one with accuracy to 0.1gm. When making smaller batches I want more accuracy, so use the better accuracy scale (0.1gm accuracy) because there is little room for error. I also use the smaller scale for measuring my lye.

Just some thoughts. I hope someone with more experience chimes in with some ideas of what's going one with your soap.

How do they look now after a few more days drying time?

Did you do an ITP swirl or swirl in the mold?
D

I think maybe some of the soap got too cool so it was too firm to bond well when you added more soap. Gelling can really help with that.

dixiedragon said:
I think maybe some of the soap got too cool so it was too firm to bond well when you added more soap. Gelling can really help with that.
Click to expand...

That's what I was thinking, also
D

Try this - take some of the bars (not all of them) and put them in an oven save dish of some kind - maybe a glass casserole dish lightly greased with mineral oil. Gently press the soap so the separated placed are closed. preheat your oven to 120-140F, put the soap in, and turn it off. You may turn it on and off a few times to keep it toasty warm. The point here is to try to force gel. I don't know if it will work, which is why I'm suggesting starting with a few pieces!
R

Thanks for all the input. Of all the possibilities, the one that I considered was that the botanicals (and silk) in the lye water ended up with some of the NaOH and got tossed after I strained the lye water. But that should have just made things a bit softer and more superfatted, I would think.

The other possibility mentioned is the scale. I'd love an expensive scale, but only have a kitchen scale from Publix. Up to now, it's served me well, but I am wondering.

Anyway, the zap has calmed down and now the only problem (other than just being ugly) is that the soap is pretty soft. That seems to be a common theme in the winter time, as the soaping room is around 51 degrees (I checked after my initial post). I hope to make some this weekend, but I'll bring it into the main part of the house to gel after putting it in the mold.

To the question of how it was 'swirled,' it wasn't. I just poured concentric circles into two separate parts of my kitty litter box mold. Just kept pouring into the center of the previous spot, only it was hard to tell what was happening since it only looked like two colors from the five batches.
You must log in or register to reply here.
Share:
Facebook Twitter Reddit Pinterest Tumblr WhatsApp Email Link