I will let you know how it behaves in CP shortly, as I grabbed bottles of the ones I am out of that I use the most often.

Whoopee! They actually have quite a few different kinds listed at their site and free shipping!
A

Susie said:
By their potpourri/diffuser/aromatherapy stuff.

I will let you know how it behaves in CP shortly, as I grabbed bottles of the ones I am out of that I use the most often.
Click to expand...

The ones online are not what I bought at the store yesterday. When my hubby wakes up, I will grab one a get a pic. 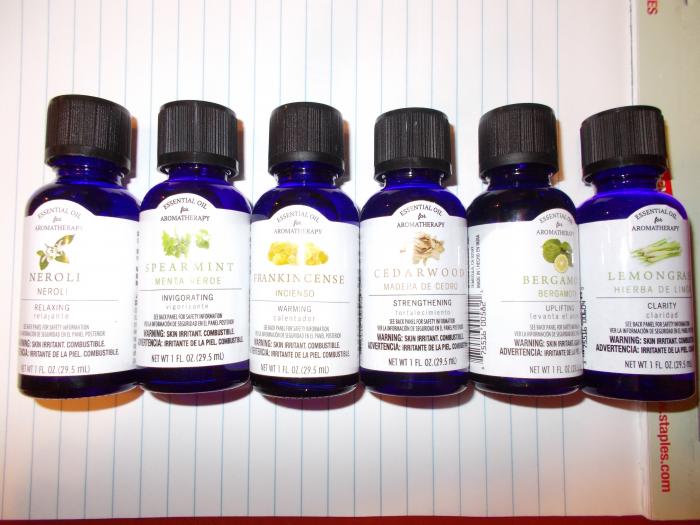 I just saw these at my Walmart last week. They were near the end of a row by the bath stuff and epsom salt soaks.

dibbles said:
Is that really 100% neroli EO? For under $5/oz? Neroli is one of my favorite scents, but I have always found it to be too pricey - easily over $150/oz.
Click to expand...

Each bottle's ingredient list reads only <name> essential oil. I checked each one. I do not know whether these are true essential oils, but they are to the best of my knowledge. I am going to try to soap with one of them today or tomorrow, and I will let you know. I understand that this is not the cheapest way to buy EOs, but it is really convenient for me to get "fill in" scents until I make a big order when someone has a big sale.

My only concern is the packaging for that. Blue bottles aren't the best choice for these oils but keeping them in the dark should be helpful.
S

I store my FOs and EOs in opaque tubs with opaque latching lids just for that reason.

I found them at my walmart after seeing this post. The bottles have a bunch of warnings about aromatherapy use only, avoid skin contact and whatnot. Could be just covering their butts? I bought a bottle of lemon. Smells like lemon and doesn't leave an oil spot on paper (I don't know how accurate that is, I read it somewhere). I'm kinda leery about using it in soap though. Might try it in a single bottle of liquid soap, see if it burns my skin off. :mrgreen: The people I work for have a lemon hand soap in the kitchen that works really well for kitchen odors like onions and such, I thought I could recreate something similar with liquid castile.

Did you try them in soap, Susie?
S

Not yet, I got lured away from my good intentions by another FO, then another one.... And now I have to get some unscented made today for someone who does not know what she is allergic to, so she has been using my liquid soap for a bit just to get her skin to calm down while some bar soap cures. She was out of town, so she did not tell me that is what she is doing. I really do need to keep a batch of cured unscented soap around just for people with lots of allergies. I'll get around to it ASAP, but no promises on when. The problem is that I only have one loaf mold. I may have to get another one very soon.
S

I made a half batch with frankincense, cedarwood, and bergamot on 10-9-16. The soap acted normal with regards to trace, but the scent is all but non-existent today (10-12-16) on a small sample I cut off. Will check later.
S

Tell us how it goes!

I found those in our local Walmart and OOB I'm unimpressed. They were all weak and IMHO didn't smell quite right to my nose, especially the woody, earthy ones. Not surprised to hear that so far it appears the scent didn't stick (so far, anyway)

I added the lemon to a little baby food jar of liquid soap and it took an awful lot of drops to get enough fragrance to scent the soap. Doesn't eat the skin off my hands though, so that's something .

DawninWA said:
I added the lemon to a little baby food jar of liquid soap and it took an awful lot of drops to get enough fragrance to scent the soap. Doesn't eat the skin off my hands though, so that's something .
Click to expand...

I don't really know exactly, I wasn't measuring. The baby food jar was about 4 oz, I added a few drops, nothing, added a few more, etc. I think in total probably 20 or 30 drops.

I saw them today, and having worked with premium oils, I opened them each to smell. The fragrances are not strong at all. I personally wouldn't bother using them for soap.
I think they are strictly for aromatherapy. Frankincense is NOT a $4.47 oil. Neither is neroli.
You must log in or register to reply here.
Share:
Facebook Twitter Reddit Pinterest Tumblr WhatsApp Email Link