Using FO as a colorant

I have an FO with a high % of vanilla -- Autumn Woods from Nature's Garden (NG). It's a woodsy vanilla-y scent that's growing on me. I think vanilla scents can be kind of cloying and cotton-candy sweet sometimes, but this FO smells pretty good.

Anyway, I know this FO discolors to a caramel color, and I want to use the FO as the colorant in my soap.

My plan at the moment is to leave half of the batter uncolored and unscented, and add the FO to the other half. I'll do an in-the-pot-swirl or a faux funnel swirl with the two portions of batter. And hope desperately that I get really lucky and my swirling goes okay and looks nice. :think:

My question is this -- if I calculate the amount of FO needed for the entire batch of soap, but I put that whole amount in only half of the batter, am I taking a risk of Bad Things Happening? Like the FO weeping out or whatever? Any words of wisdom and advice will be most appreciated! TIA!!!!

I might be one of the local science nerds around here, but this scenting and swirling thing gives me nervous heartburn. Give me a good algebra problem over this! But I like soaps that smell good and look pretty, so I'm gonna keep working at it!

I've only done up to a third of my batch unscented. It came out fine, but I was using .8 ppo. You might want to put in just a smidge of color to make sure that the FO discolors evenly. They can be splotchy otherwise.
N

I don't think I would put the whole batch's worth in half the batter. You could end up with that half accelerating a lot while the other half stays fluid, which will make your faux funnel not happen. If it's a strong FO, you could just put the normal amount for that part of the batter, meaning if you have a 20 ounce oils batch, you would use the normal amount for 10 ounces of oil. If it's a lighter scent, I would put maybe 1.3-1.5 times the amount in the scented part, but not double. ALso, it seems to me that many scents with vanilla content tend to accelerate a bit so be prepared for a w little discrepancy between the two halves. You can always hand stir in the scent and then SB the other half to catch it up.

I agree on the bit of TD in the unscented half. The vanilla brown can bleed over a little and the TD will help it stay lighter.

When I use a discoloring fo, I will usually separate out approx 1/3 of the batter to color and dump all the fo in the remaining, without any problems. I have dumped all my fo in a little over half the batter with no great issues, and putting the mold in the freezer. My normal fo usage is 6%

Thanks to all who shared their ideas and advice! I think from what you've all said, I'm asking for trouble to put a full dose of FO in half the batter -- I need to put the FO in about 2/3 the batter or back off on the amount of FO I use. Makes sense.

And thanks for the warning about vanilla causing acceleration, Newbie. I will take your advice to hand stir the batter with the FO in it.

My soap recipe is mostly lard with a dab of coconut and either olive or high oleic safflower depending on what I've got on hand. The recipe usually moves slowly for me as long as I don't get too crazy with the stick blender, so I've got that much going for me. I'm curious to see how this adventure turns out!

Oh yes! Now we have to see how your project turns out.

As you asked, here is a pic of the finished bars at just over Week 3 of cure, so the process of discoloration is completed.

I used a tested and true soap recipe and calculated the amount of FO at 4% ppo. Put that full amount in 1/2 of the batter. Poured alternating layers of no-FO batter and FO batter (hard to keep straight since both portions of batter looked the same!)

Finished with a brave attempt at a hanger swirl throughout the whole loaf and did a little chopstick figure-8 twiddly thing to trick out the top. The soap got some ash on the top, but I didn't do anything to remove it -- I think it looks fine.

I think this soap turned out very well. The FO is a woodsy vanilla-y scent and the soap has the appearance of burled wood. I think the scent and the look go together pretty well. Thanks, all -- I appreciate the help with this project! 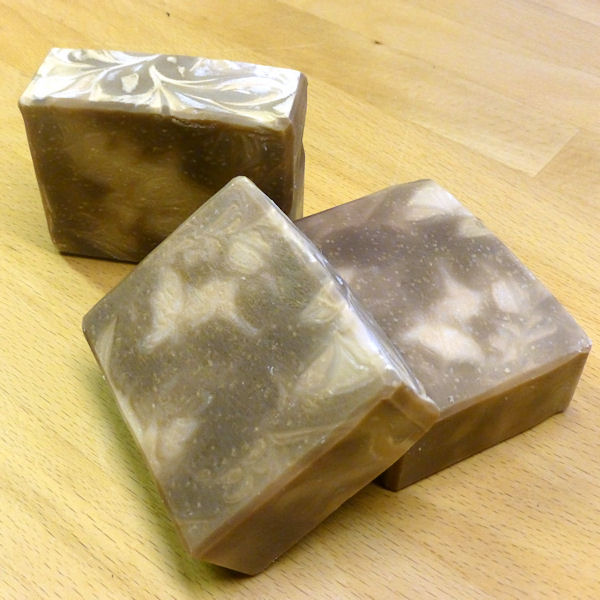 Those turned out very elegant!

Thanks for the update....now to see if I can do this
Any issues with accelerating?

They turned out nicely.

Those are really pretty. It must be scary to make them as you can't se if you have over swirled until it's too late!

Thanks for the replies!

Saponista -- Yes, it was interesting to do this batch. Like I said earlier, any decorative work in soap gives me heartburn -- I really don't feel comfortable with my ability to make a pretty swirl. Making this "invisible swirl" was not a whole lot more scary than any other to be honest, but I did have to concentrate on not spacing off as I was pouring the layers -- right hand pour ... left hand pour ... right hand pour ... etc.

Nsmar -- As far as accelerating, no I didn't see that happening at all with this particular FO. I did take Newbie's advice to back off on the stick blender and I'm sure that was wise advice to follow. I didn't soap overly cool, however. My fats (lard, high oleic safflower, coconut oil) were just warm enough so the lard was liquidy but still opaque -- maybe upper 80s F. I added my lye solution to the fats without cooling the lye at all. The side of my soap pot was warmish to my hand, so the batter was probably somewhere between 110-120 F. The soap fully gelled without any added heat or insulation.
C

nothing like making lemonades with lemons as the saying goes...you rock DeeAnna!

Those are beautiful, D. I love the way the top and the body go together.
N

Those are great! I would not have guessed you were not in the habit of swirling; your top looks very elegant. Did you use a fair amount of water with your TD? There is almost a little bit of the halo effect like I see with the water difference, in yours around the white batter. I personally like the effect quite a lot.

Oooo those came out really nice!

Newbie -- Thank you! I have practiced the chopstick figure-8 twiddly thing on pretty much every soap I make. I can finally do the pattern in one nice pass and STOP. Not all that long ago, I would have to do the pattern, agonize, re-do, agonize, re-re-do, etc. until the soap got so pudding-y thick that I was starting to cut grooves rather than make swirls.

It's my one and only claim to swirling fame at the moment -- the one pattern I can do with some success. Are there swirling merit badges? If so, I think I've earned this one for the chopstick figure-8 twiddly thing.

I don't own a single drop of TD, but you are right -- there are lighter halos around the swirls. I've noticed in other recipes that I (try to) swirl that streaks of light-colored soap often seem follow the path of my swirling tool. I think this is caused by the usual "glycerin rivers, stearic streaks" thing that can happen while soap is gelling and setting up.

I used a 31% lye concentration and the soap gelled -- these factors contribute to streaking/mottling. If I increase the lye concentration to the 33% I used to use, the next batch of this soap would probably not develop these streaks, even if it gels. I don't mind the streaking -- I think it's pretty -- and the extra bit of water seems to slow down my slow-trace recipe even more. That is good for fumble-fingered me.

In hindsight, you have convinced me about the TD -- I want to get some to try now. I think adding TD to the light portion of the batter would make the soap more interesting by increasing the contrast. (...writing this down in notes for my next supply order...)
You must log in or register to reply here.
Share:
Facebook Twitter Reddit Pinterest Tumblr WhatsApp Email Link