This is classic transparent soap with the interesting twist that it incorporates rosin, which is a type of pine tree ooze (chunks of which are shown at the upper right of the photo). Viol players know it as the stuff you put on your bow.

Rosin is meltable and saponifiable and was once an extremely common ingredient in commercial soap. The rosin provides all the color and aroma for this soap. I was trying to think of how to describe the fragrance to you but it's difficult. Maybe earthy with a touch of caramel sweetness. 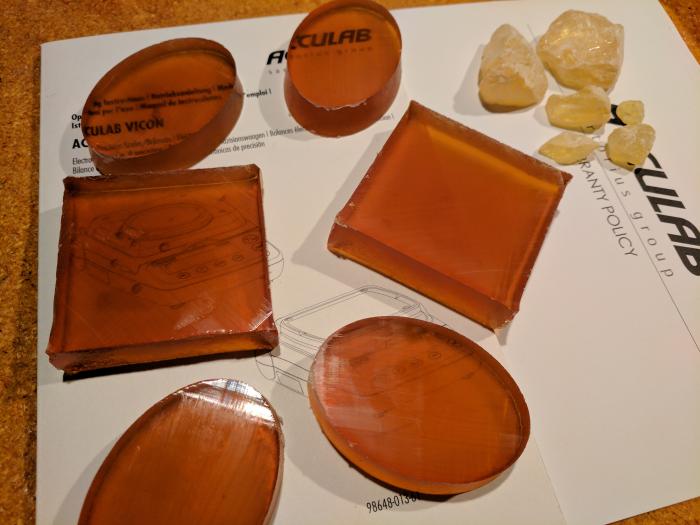 I used pine rosin in my Pears soap dup.

Wow....nice job TOMH! I'm just wondering if that was the scent in Neutrogena glycerin soap from 50 years ago.Care to walk us through the process? Many thanks for all your sharing...

CTAnton said:
Wow....nice job TOMH! I'm just wondering if that was the scent in Neutrogena glycerin soap from 50 years ago.Care to walk us through the process? Many thanks for all your sharing...
Click to expand...

I used to use that soap.

TOHM, they are beautiful soaps. Your dedication to creating transparent soap is amazing to me. I tried once and it was so very much work and so very complicated, and unsuccessful, that I have not tried again.

Is your recipe similar to lsg's?

CTAnton said:
Wow....nice job TOMH! I'm just wondering if that was the scent in Neutrogena glycerin soap from 50 years ago.Care to walk us through the process? Many thanks for all your sharing...
Click to expand...

I don't think Neutrogena was a rosin soap, though it had that color. Below is a link to the original patent for a type of soap the inventor described as "neutrogenous" that was given the name Neutrogena. It was made with coconut oil, tallow, castor oil and TEA (see below).

The patent describes how the high pH of plain sodium soap causes damage to skin proteins. By using a substance called triethanolamine (TEA) he was able to create a soap with essentially a neutral pH (7.5 in 10% solution). I assume that has something to do with the name.

Note that original Neutrogena was a hard soap made from 30% castor oil, which kinda of highlights that it's questionable to indoctrinate every newbie into the group beliefs about how to formulate soap.

As for how I made this particular soap, you can learn about it in Catherine Failor's Making Transparent Soap book. You have to be careful and confident to use this particular method because it requires 95% ethanol or denatured alcohol. It's hard to keep it from boiling off, and it's highly flammable. I would personally never do it on a gas stove.

There's a lot of history behind the technique. Failor is actually adapting methods for crafters that have been known for maybe 200 years or more. It was worked out long ago that alcohol, glycerin, sugar and castor oil can be used as solvents and crystal modifiers to dissolve soap into liquid solution and have it remain transparent when it solidifies.

Rosin is also a crystal modifier that helps clarify soap, which is why this recipe does not include castor oil.

Is your recipe similar to lsg's?
Click to expand...

Yes and no. Glycerin is a good solvent for this purpose and can be used for any kind of transparent soap, including M&P base. However, these types of soaps aren't really made with only glycerin because that produces soap with some flaws, very notably that it sweats really easily. So normally transparent recipes use a combination of solvents that work well in unison. This one uses ethanol, glycerol, and sugar.

The M&P base I've been making uses a different combination of solvents: propylene glycol, glycerin and sorbitol.


earlene said:
I used to use that soap.

TOHM, they are beautiful soaps. Your dedication to creating transparent soap is amazing to me. I tried once and it was so very much work and so very complicated, and unsuccessful, that I have not tried again.
Click to expand...

Thanks very much. Sometimes there's renewed excitement going down a road you haven't explored before. I haven't actually even gotten that far. I wanted to make sure I could execute some proven techniques and recipes more than once, and this soap is part of that. I have more adventurous transparent soap possibilities I want to try as time allows.
C

I love the scent of rosin! TOMH, thanks for posting your gorgeous soap. I had never heard of rosin in soap before, so of course I've been looking for info all over the internet, and I've learned so much about the history of soap in the process. Thank you!

Very nice indeed!
Way beyond my abilities - and yes I have tried a few times.

Wow, that's really lovely! You translucent soaps are a thing of beauty!

Wow! Beautiful soap and I commend you on making it. I only got as far as reading about making it and gave up halfway thru! (reading, not actually making it!) :mrgreen:

I love the way they look!

I just want to mention that this soap is surprisingly good. I like the natural color and aroma. It makes a nice lather that looks and feels creamy, and it leaves a smooth skin feel.