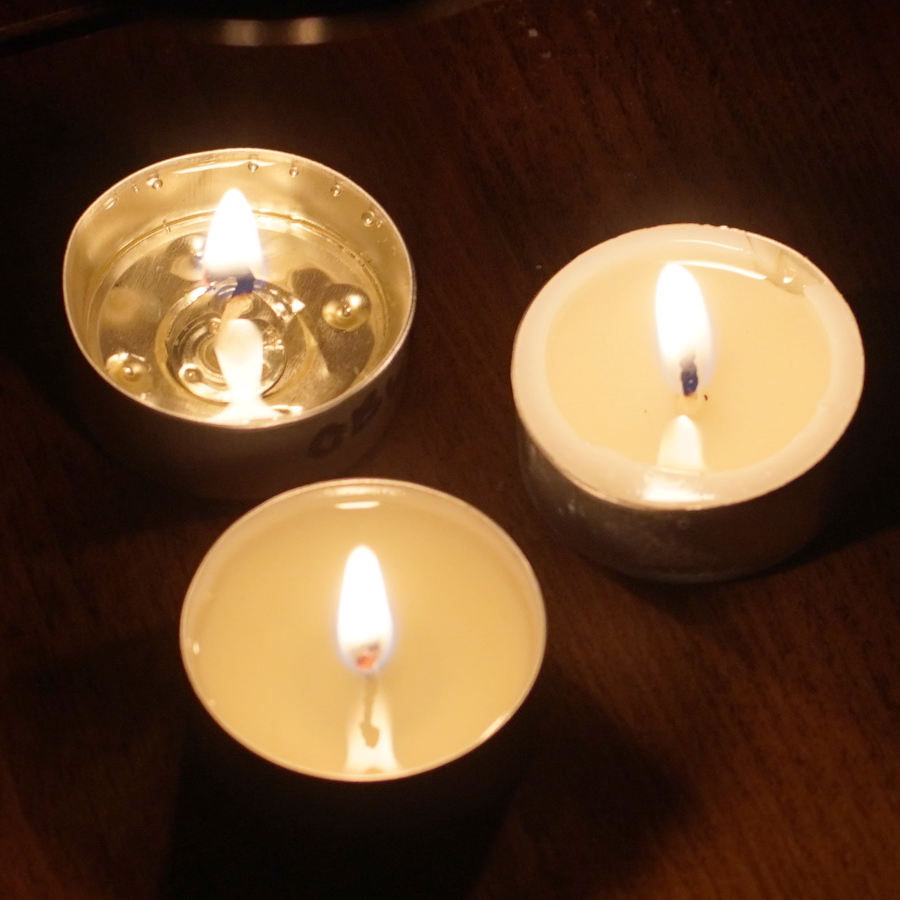 Well, not that simple, of course

. One is fueled with palm wax (fractionated-triglyceride-type palm stearin), one with “Wenzel Raps Wax” (hydrogenated canola), and the last one with my latest haul, OBW073 canola wax.

It doesn't sound like off-label use when I use canola wax to make candles, or does it? What if I have obtained it from a soapmaking supply store? 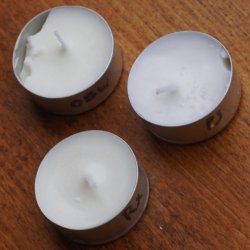 Anyway, each tea light holds 14 g of the respective wax. I did enough research on wicks that I know I know nothing about wicks, lol. I just used, in all three candles, the ones that came with the palm stearin tea lights. Melted up the waxes, cast, and added the wick. For the sake of comparison, I also melted up the palm wax (they originally came pressed, not cast).
All three are reasonably light coloured, the palm wax appears lighter than the canola-derived ones, but part of it can well be due to fluorescence of palm oil (it looks slightly cream-coloured but at the same time has that whiter-than-white shine typical for optical brigtheners).

I placed them in a triangle so that they would mutually heat up in an equal way. The first one to go out was the Raps Wax one (front), that got exhausted after 3h 10min. It also had a significantly larger and brighter flame, and some serious mushrooming at the end of its life span. 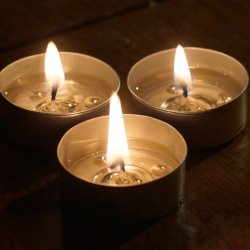 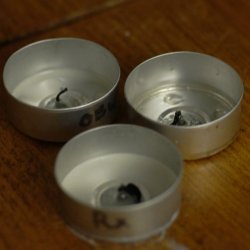 All three burned fine and calm. The OBW073 was the first to be fully molten up, the palm wax needed longest, and it initially looked as if its melt pool had some troubles to reach the whole diameter of the tea light. Both canola wax candles burned with a higher/brighter flame, so (without hard numbers) it seems that I “got more light” out of the same amount of candle with canola wax than with palm wax.
I know that tea lights aren't the champion discipline in candle making, but FWIW, it's a fair start, and I do have some viable candle wax for the first time now.

The other off-off-off-off-label insight I gained was that the OBW seems a great choice for soapmaking (fuses quite quickly into a clear melt), i. e. less prone to false trace than the Raps Wax, that has given me some troubles every now and then.

Seems like there's a lot of new (to me) waxes out there lately. I recently encountered palm wax here as well, and also coconut wax, and wondered how'd they be in soap lol. I haven't seen canola here though..

Thanks for this info! I tried once or twice making candles but liked soap more haha

As far as I understood it, canola wax is kind of the “European twist” on soy wax: European consumers are very skeptical towards soy, but candle manufacturers here would like to benefit from the advantages that led to the American soy wax craze. Canola is reasonably similar to soy to just transfer all the techniques (beginning at partial hydrogenation), but without the connotations of rainforest devastation and GMO (at least as long as it is cultivated in Europe).

The soy wax craze has reached here too. Can't find the GW 415 or the like here though, so I've not soaped with it much (I tried the 464 and it made my soap sticky, and prone to DOS) and it's back to the drawing board for me looking for a wax, or anything else, for vegan soaps without using too much of the butters. Or palm.

Going back to candles.. Maybe I'll use my soy for one or two. And thank you, I learned something new today - the bit about canola wax, and the fluorescence of palm wax earlier

Canola is rapeseed oil. Rapeseed is a HUGE industry here in Canada, but the public are adverse to the name, d'uh! So, they named it Canola: Canadian Oil

Canola is a sustainable source of healthy cooking oil and high-protein meal. Learn about this Canadian innovation and how the industry works together.

When Life gives you ugly scented candles … make soap out of them!