Zing said:
Okay, this just went into a totally new direction. I am lmfao!
Our gal at the end of the bar likes to get into the shower when I get out of the shower (nope, no photo documentation here, nope nope nope!! nothing to un-see here!).
Click to expand...

This would be hilarious if there was at least some shred of evidence, I mean, even just a YouTube video… Funny story Zing, I believe you

Yes, we blow dry wet cats! Low heat, of course, but we guarantee that your cat will be twice as feisty! GUARANTEED!!! If your cat isn’t feisty enough we’ll rectify it PRONTO! Pre/Post photos available…

I am terribly petrified of spiders, so imagine my dismay at the gal at the end of the bar that just sat there gleefully preening herself as I had to hunt down a large eight-legged creepy crawler on crack.

I guess I am kinda glad she didn't get up off the chair since I didn't know what kind of spider it was. The porch is very dimly lit, it could have been a brown recluse. But I am still annoyed that she didn't even bat a whisker at it LOL.

I have never seen a spider run so fast. It kept darting around and running for shadows. It was CRAZY!! And it was big! Rest assured, it is dead. I'm not going to sleep well tonight nonetheless.

I broke a lease and moved out of an apartment in Philly once because of spiders LOL. I kept calling management over them and they did nothing. I used to knock on my neighbor across the hall door to have her husband come over and kill them for me (I am really that afraid of spiders). One time I trapped one in an overturned glass. I sprayed wd-40 in it with the little straw and it still didn't die LOL. By the time he got there, it had a long hairy arm stuck out of the bottom and wrapped up around the outside of the glass. He's like "sorry chicka, you gotta find someone else for THIS one". The same day I had a friend coming over to fix my car. He says "awww, I gotta kill a itty bitty spider for you". Ok, so it took the two of us to kill the darned thing: me to lift the glass with my mechanic friend on the ready with a sneaker to kill it LOL. We were both terrified of it. I was in a new apartment in two weeks.

Be proud...I actually killed this one tonight LOL. All by myself LOL.

I also can't stand spiders, but luckily none of the spiders here are dangerous and all the gals in the bar enjoy snacking on them, so we're not excessively troubled. I couldn't imagine living somewhere that has spiders that bite!

Edit: the gal at the end of the bar just sat down next to me and decided I'm not allowed touch her with my left hand
Right hand - yep that's good, purr purr. Left hand - imma slap this!

I also can't stand spiders, but luckily none of the spiders here are dangerous and all the gals in the bar enjoy snacking on them, so we're not excessively troubled. I couldn't imagine living somewhere that has spiders that bite!

Edit: the gal at the end of the bar just sat down next to me and decided I'm not allowed touch her with my left hand
Right hand - yep that's good, purr purr. Left hand - imma slap this!

I have nothing against spiders (at least nothing that helps). Spider webs that caught dust are meh, but all in all I see the eight-legged as allies against the six-legged beasts that really do annoy me. That said, the specimens around here are by far not as scary as those in a tropical climate.

The gal at the end of the bar is ready... 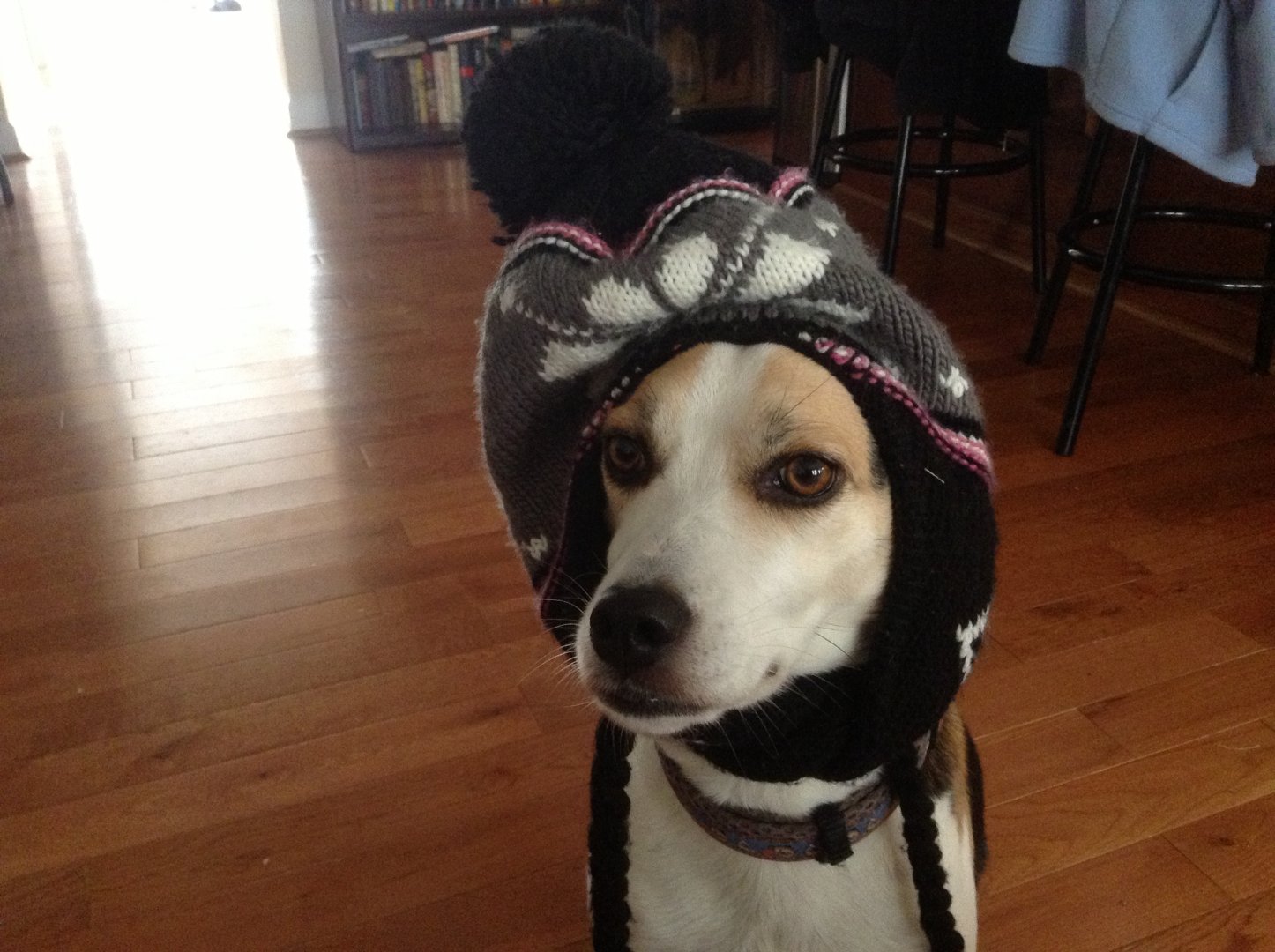 The gal at the end of the bar has gone outside to survey her domain for the evil ground squirrel and rabbits which haunt her dreams... 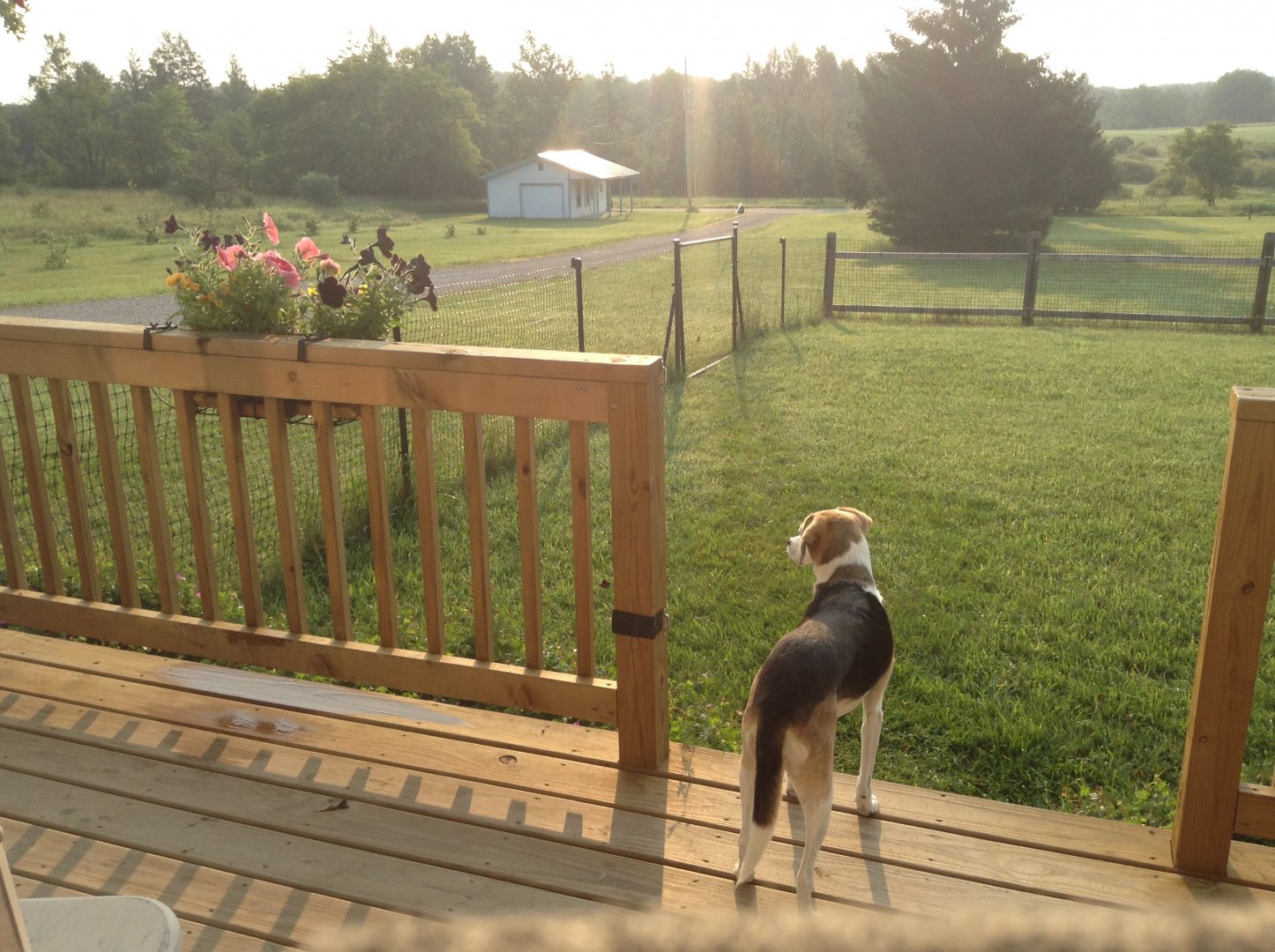 Catscankim said:
Tell me what your pet is doing right now, but call it

The guy at the end of the bar is licking the chair.
Click to expand...

The guy at the end of the bar is sleeping on our freshly made bed.

The Gal at the End of the Bar got soaked. I told her the lightening and thunder meant she'd get soaked if she insisted on gallivanting, but did she listen? I brought her in, she ate, and insisted on going back out. I even sat outside with her for a few minutes as the thunder rolled, but when the big drops started, I came back inside; she didn't. She took off to explore or whatever.

At one point, while rescuing cushions, throw pillows & throw rugs from the downpour on the Catio, I spied her dashing for shelter under the neighbor's portico. Repeatedly I called to her, but she was not inclined to make a dash back through the deluge. Some time later when the sky stopped flooding the neighborhood, she was pacing the ledge along her porch, cat-calling for attention. I had to get my garden shoes & go get her because she wasn't willing to hop down into the wet grass and come inside on her own.

Her outdoor obsession is really quite funny at times. Lately (the past couple of weeks, I guess), the Gal at the End of the Bar has taken to ringing the doorbell and running off! The gall of that Gal! Is she trying to get back at me for cutting her off at Closing Time? (Closing Time is when it gets really dark out and I cut off her access to the doorbell that she uses to let me know she wants to exit the front door and go outside.) So now she goes to the other door (that leads to Catio - screened-in porch) and rings it, then turns and heads elsewhere (often not to another exit, but just elsewhere.) Is it just to show her displeasure that I won't let her out in the middle of the night? Or is there some other message? I think it is the former. Or maybe she just likes seeing me at her beck and call.

The gal at the end of the bar got a new hairbrush today and thoroughly enjoyed being pampered! 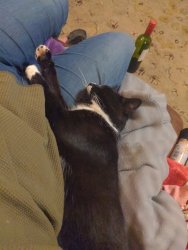 Tara_H said:
The gal at the end of the bar got a new hairbrush today and thoroughly enjoyed being pampered!

That looks like our guy! What brush does he like; we've tried so many but all are uncomfortable because his fur is so sleek and thin.

The guy at the end off the bar.....is having a hissy fit over his healthy dinner and climbed inside the recliner chair to pout!

lenarenee said:
What brush does he like; we've tried so many but all are uncomfortable because his fur is so sleek and thin.
Click to expand...

This is the new one: Double Sided Soft Brush 13cm | Pet Experts based in Ireland

Normally we use a soft nylon one which she loves, but it doesn't do a great job on the undercoat. This new one seems just right; I was a bit uncertain about the metal side because her coat isn't very thick, but I just used it very gently and she got all blissed out

The gal at the end of the bar is looking out into Her Dark Domain (the back yard) watching for nocturnal invaders so she may slay them in a manner Most Foul. Alas, not one will open The Portal to All She Surveys (sliding glass door) for her to end The Travesty of the Invasion of The Others (feral cats that are part of our city's Catch Neuter Release program, also the family of opossums). She is Most Vocal regarding her displeasure of this Foul Circumstance! Thank goodness our bedroom is on the other side of the house, and so only her mother (my daughter) hears!
You must log in or register to reply here.
Share:
Facebook Twitter Reddit Pinterest Tumblr WhatsApp Email Link