I learned a lot with this soap.

- I think it's just the ratio of hard + soft oils (50/50) that's resulting in a rather fast tracing, making it incredibly difficult to get the nice watery thin trace that I've been trying to obtain

- I need to further grind up my mica as parts of it are far too granular to mix in with the oil, and I need to use a lot more of it

- Hanger swirls are harder than I thought 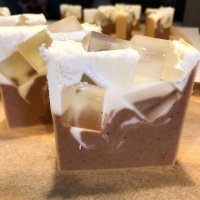 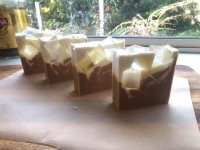 Here's my original design however: 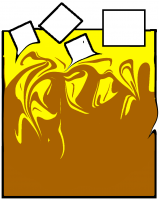 Something tells me I may have to suck it up and get a thinner silicone mould so I can get the height in these bars I've been so desperate to obtain.

Also as a bonus pic, something I'd noticed is that while the soap poured into the mould as a very smooth liquid-batter form, as it set however the top became a tad grainy looking, almost as if it had separated, but this doesn't quite look like any of the seperation I've seen in "What's wrong with my soap?" threads. Either way, it's the first time I've seen it occur with this recipe.

That is an awesome looking soap! Great use of m&p. To me, though, it looks more like an iced coffee latte.

Very cute concept! It isn't exactly what you had in mind but it isn't too far off either. Good job!

It looks like iced coffee. I want to put a straw in it!
G

Those look fantastic! The top texture might not have been what you wanted, but if I would try to get it on purpose for a latte or beer soap. What was your water ratio and soaping temperature range?

That looks pretty good though.
F

I'm not sure if you get this down under, but your soap INSTANTLY brought me back to my childhood summers.

I believe you have some glycerine rivers in the white portion. Honestly, I think it adds to the design. Very nicely done!

That looks so cool!
I really love how it looks and how the light shines through the squares.

I love this design, very creative. The "ice cubes" are great!
F