Made a small stash busting batch of soap yesterday and when I unmolded it today I noticed that it had a chemically smell. It seriously smells like when you walk by a salon and smell the hair permanent chemicals. No zap at all. It did take a long time to go through gel phase and I know it got too warm. Have some glycerin rivers, and didn't use milk or sugars in my recipe at all, just distilled water. I suspect that the fragrance oil did not like the gel phase. I used crafter 's choice cantaloupe fragrance oil. When I checked the website today I didn't see it there anymore. Has anyone else ever had this issue? After several hours, the stink has changed from a hair permanent smell to more of a cantaloupe - nail polish remover smell. Very chemically smelling. I asked some of my family for their opinion and they agree about the odor description. I've had a similar problem with other fragrance oils when I tried to CPOP a soap but it hasn't happened to me with just towels for insulation. All of my oils are fresh. Made another batch with them last week and that one came out perfect. Can anyone shed some light on this problem? With the other stinky CPOP batches I eventually threw them out because the stink never went away even after a month of cure. Sorry about the long post. So bummed .
Here's the soap in the mold before insulation and the next day. Sorry about the poor lighting on the second pic. 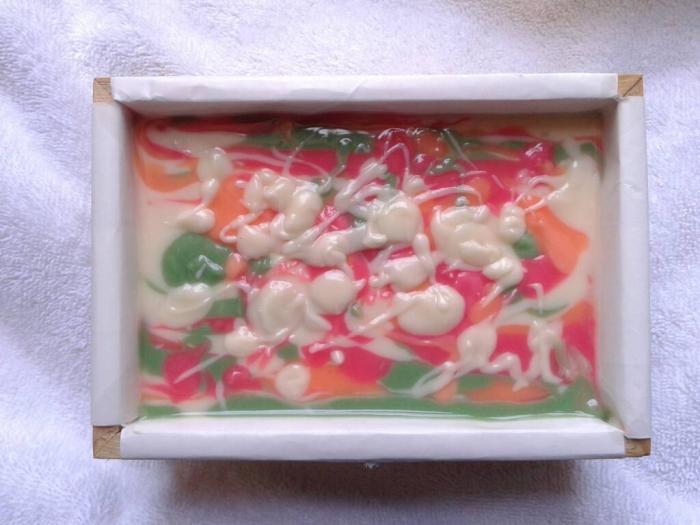 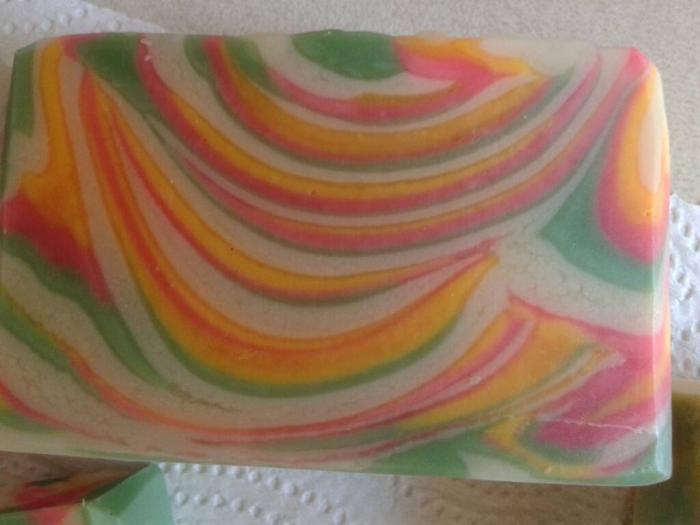 This happened to me once when I preheated the oven to 170*F and put the wrapped soap in then turned off the oven. Unfortunately the smell never goes away.

I don' think it's the FO it's the overheating. I only pre-heat the oven to 110*F now and haven't had a problem with gel or scents regardless of the FO.
L

Thanks for the feedback. At least I'm not the only one who's experienced this. I really wrapped up my mold with a couple of heavy towels and it did get really, really warm. I thought that I had learned my lesson about over insulating and trying to force gel, but I guess not .

Very interesting.....I have one or 2 FO's that always emit a strong perm smell after unmolding (one of them is Sun & Sand from WSP), but thankfully the perm smell always goes away within 1 to 2 weeks time, and the soap cures out to what the FO is supposed to smell like.

I've had that happen a couple of times but I can't remember what FO's I used. I left it to cure for 6-8 weeks and the scent morphed back to the OOB smell. Hopefully yours will do the same as that's really pretty soap!

Beautiful soap. How do you get that effect?
L

Thanks. I used a clothespin to tilt the mold while pouring in a tiger stripe pattern. I started with tilting the mold to one side, poured a few stripes, then tilted to the other side, poured again, then in the center with the mold flat on the counter. I just repeated that process until I ran out of soap. I'm definitely going to try it again. I'm encouraged by the effect even though the layers look a little grainy and separated from the glycerin rivers. I'm definitely not going to over insulate next time .

Nice soap!
I would be tempted to increase the water next time to encourage low temperature gel and forego the oven entirely.
Really really like the technique!

lathered_up said:
Thanks. I used a clothespin to tilt the mold while pouring in a tiger stripe pattern. I started with tilting the mold to one side, poured a few stripes, then tilted to the other side, poured again, then in the center with the mold flat on the counter. I just repeated that process until I ran out of soap. I'm definitely going to try it again. I'm encouraged by the effect even though the layers look a little grainy and separated from the glycerin rivers. I'm definitely not going to over insulate next time .
Click to expand...

I think there's a difference between over insulating and cooking the soap. The effect I was talking about was when the soap was cooked. What is your CPOP method?
L

I turned my oven to its lowest setting (170 F) then turned it off a about 10 minutes before putting my mold in. I left the door ajar and kept my eye on the soap until I noticed gel phase, then took it out to prevent separation. This method worked the best way for me after several botched batches. I haven't attempted a CPOP batch in a long time because it was just too temperamental, and I couldn't find a method that I was completely comfortable with. I'm not completely sure what happened with this last batch, I only know that I insulated heavily (more than I usually do), hoping for a full gel phase and got some seriously stinky soap instead. The only other time I've had this issue is when I've struggled with my CPOP batches. I must have some weird soaping mojo going on over here .

I now use Irish Lass's method which is to pre-heat oven to 110*F ( I use a thermometer or my hand to check this) wrap my soap in a small piece of woolen blanket. Turn the oven off and leave it untouched for 12 hours or so. This is a perfect method for me as it unmolds and cuts right away, no crumbling and no partial gel. I have 2 ovens though so no drama there.

I think you just have to find something that works for you and is simple so you can produce the same results everytime without hovering over it or worrying about it at all.
L

Thanks Penelope. I'll definitely try Irish Lass's method when I get the courage to try CPOP again. ; )

Ditto what Penelope said. I really dislike the 170F CPOP method. It's proven to be too hot and too problematic for me.

I have a Maytag oven with a handy digital readout display that keeps track of my oven temp as it's heating up. Once it hits 110F, I turn my oven off. It takes all of 3 minutes for my oven to reach 110F from the time I turn it on.

One of the nicest things about this particular CPOP method is that I don't have to keep a constant vigil by the oven to see when the soap gels so I can pull it so that it doesn't overheat. I just set it in there and forget about it until I think about it sometime the next day.

As I recently mentioned in another thread, my goal with CPOP is not to 'force' gel by heating my oven as high as HP cooking temps (170-180F is actually how hot I HP my soap in the oven), but to 'gently coax' gel by providing only enough gentle heat that will support/encourage the normal/natural exothermic lye-reaction to happily proceed along to it's conclusion. I guess you can liken it to the difference between forcefully pushing someone into a pool of water or gently coaxing them in invitingly instead. The former will cause problems and be much more traumatic than the latter.

IL -- I like your way of explaining your CPOP method -- coaxing the soap. Very apropos!
L