Some of my Soaps

AliOop said:
How are your recent bars doing with that formula doing, @TheGecko?
Click to expand...

It’s been seven days…no discoloration at all in the Autumn Harvest; it’s still white. The Ancient Sedona that I made almost two months ago, also no discoloration.

I had planned on making soap today, but other stuff came so it will be tomorrow before I do my Dragon’s Blood experiment.

Made some new soaps.

First up is my first Confetti Soap. When I was planning my soaps from the Rainbow Challenge last year, I noticed they broke up into tiny bits so I saved them and then planned an extra bar for good measure and I had 3.5 oz of 'bits'...enough for a Test Batch. I was able to keep the calculations simple since it was the same recipe...I simply subtracted the weight of the bits from my total batch weight then fiddled with my recipe in SoapCalc for the difference. I added a full measure of BRV since the other soap was unscented and it happened to be sitting on my counter. After after adding the FO and blending to emulsion, I stirred the bits on and noticed the batter looked a little 'grey'. Not a huge surprise since they was a lot of blue and purple in my bits so I added some dispersed in oil TD and stirred it in. It could be a little whiter, but on the whole I am not displeased. 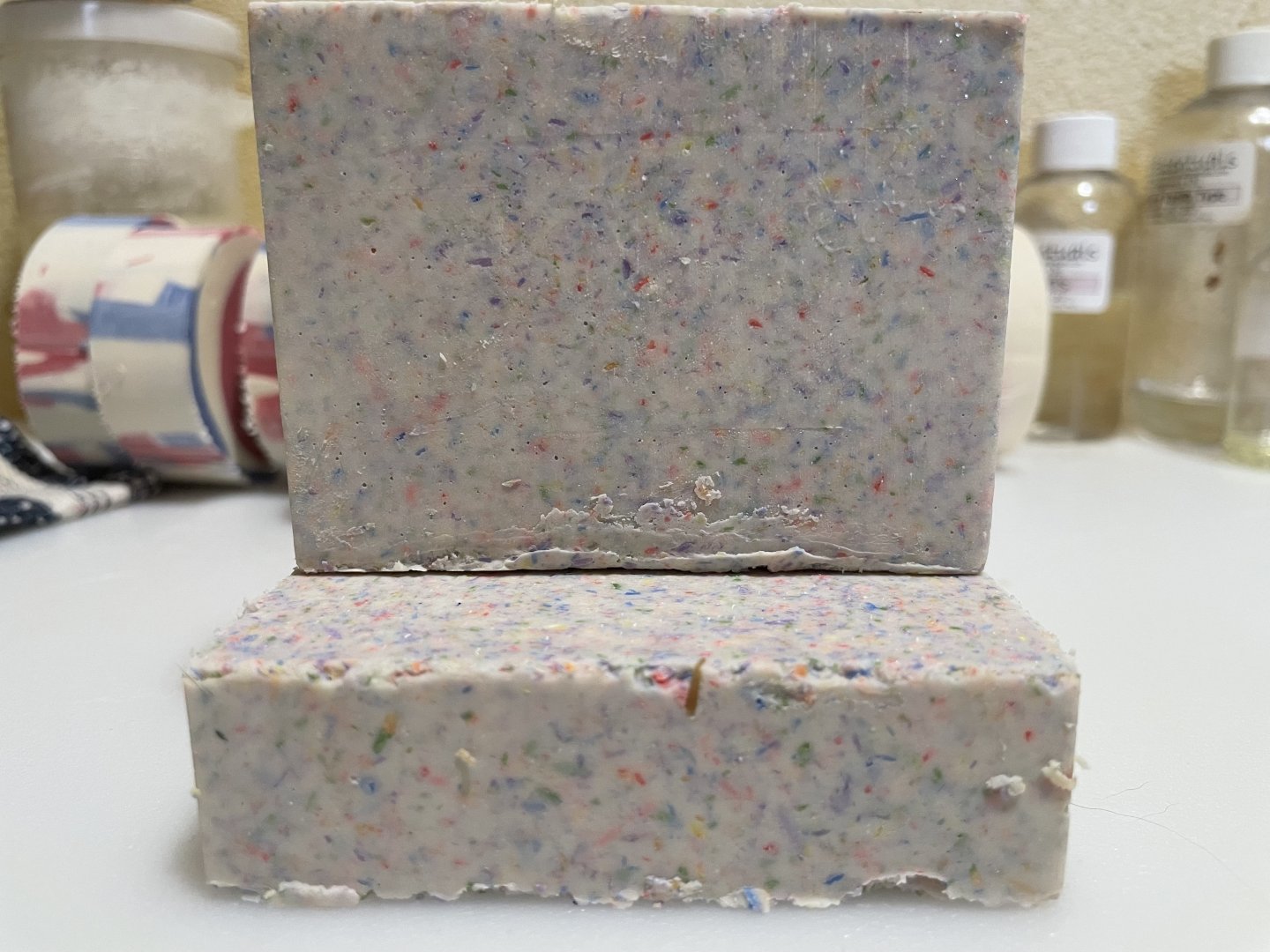 Next up is a test of Kentucky Bourbon from BrambleBerry. As per normal when testing a new FO I leave the batter uncolored regardless of whether or not it is a discoloring FO 'cuz ya just never know. The FO has 1.6% vanilla and is said to discolor to a light tan. I never expect an immediate discoloration...the Dragon's Blood above took several weeks to full discolor, but I was surprised to say the least when I cut up just a short while ago.

First off, this is a classic example of there often being no rhyme or reason to soda ash. The Confetti soap is the same recipe, same size mold, slept in the same bed, different FO...no soda ash.

Second, these...swirls...I don't understand, I've never had this happen before. As per usual, I added Kaolin Clay to the FO, mixed with my mini blender, let it sit for a bit while I melted my oils and then mixed again before adding to the oils and stirring them in to disperse the clay and FO. I then added my Lye Solution and since this was just a Test Batch, blended to a medium trace. It poured beautifully, tapped it down and because I had blended to a medium trace, was able to give it a little swirl on top in about 10 minutes.

Usually I switch to a 35% Lye Solution during the Winter, but still had a half gallon of 33% that I decided to use. It was pretty cold in the garage...low 30s. Normally I let my soap sit in the mold for a day or two, double it during the Winter, but I was a bit eager and soap felt like cheddar after 14 hours so I decided to go for it. It was a bit sticky and I had soda ash, even on the sides and bottom. It should be noted that I always wash, rinse and dry my molds well before using as sometimes weeks will pass between use. This will be interesting to see how it looks over the coming weeks. 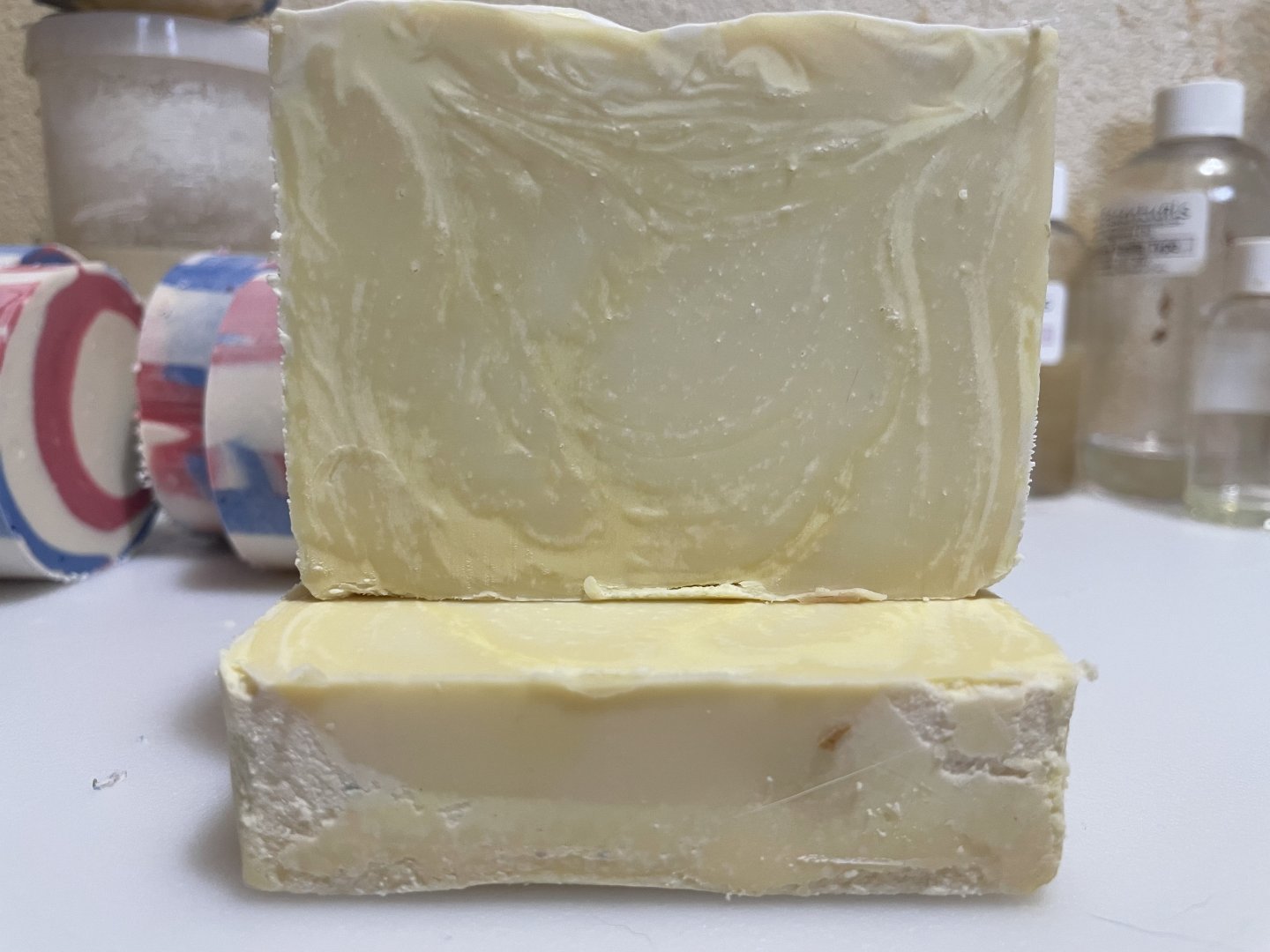 Last for this round is a double 'first' for me. First time using a Column Mold (BB) and first time trying the Lollipop Swirl. It's not going to win any awards for sure, but I'm okay with the results. The FO is 1920s Barbershop by RE; the colorants are TD, Really Red! by Nurture Soap and Matte Cobalt Blue Ultramarine by Crafter's Choice all disperse in OO. I obviously had some issues with dispersing the blue, should have use a little more oil and my mini blender.

First...not my usual recipe. It's a custom order for someone who is allergic to Cocoa and Shea Butters so it's BB's basic recipe. I usually just use a loaf mold and a Drop Chopstick Swirl for this particular soap, but you know how it is when you get a new mold and since I needed to make this soap, why not try a new technique with it.

The batter was a little thicker than I would have liked. I usually only blend to emulsion or barely emulsion with using more than two colorants, but I was a bit on the nervous side and went full on trace. I split the batter 25% each for the red and blue and 50% for white and stirred the colorants in since the clock was ticking and then was going to take a bit of time. I did fairly good at the pour...lost a small amount of white down the outside when Minnie Mouse came in the kitchen yowling that she wanted to go out and startled me, but all the rest of the soap went inside the mold. The circles of color aren't as perfect as I would like and the pour is uneven, but again, I wasn't working with a thin batter...it was pretty much a medium trace from start to the very last when it started to turn into pudding. I was a bit worried about having a lot of air bubbles because of the thickness of the batter, but smacking the mold wasn't an option since I didn't secure it. I tried to give it a couple of gentle taps, but that was a no-go as the mold started to split. So I simply pressed the sides, covered the top with some plastic wrap and left it on the counter. 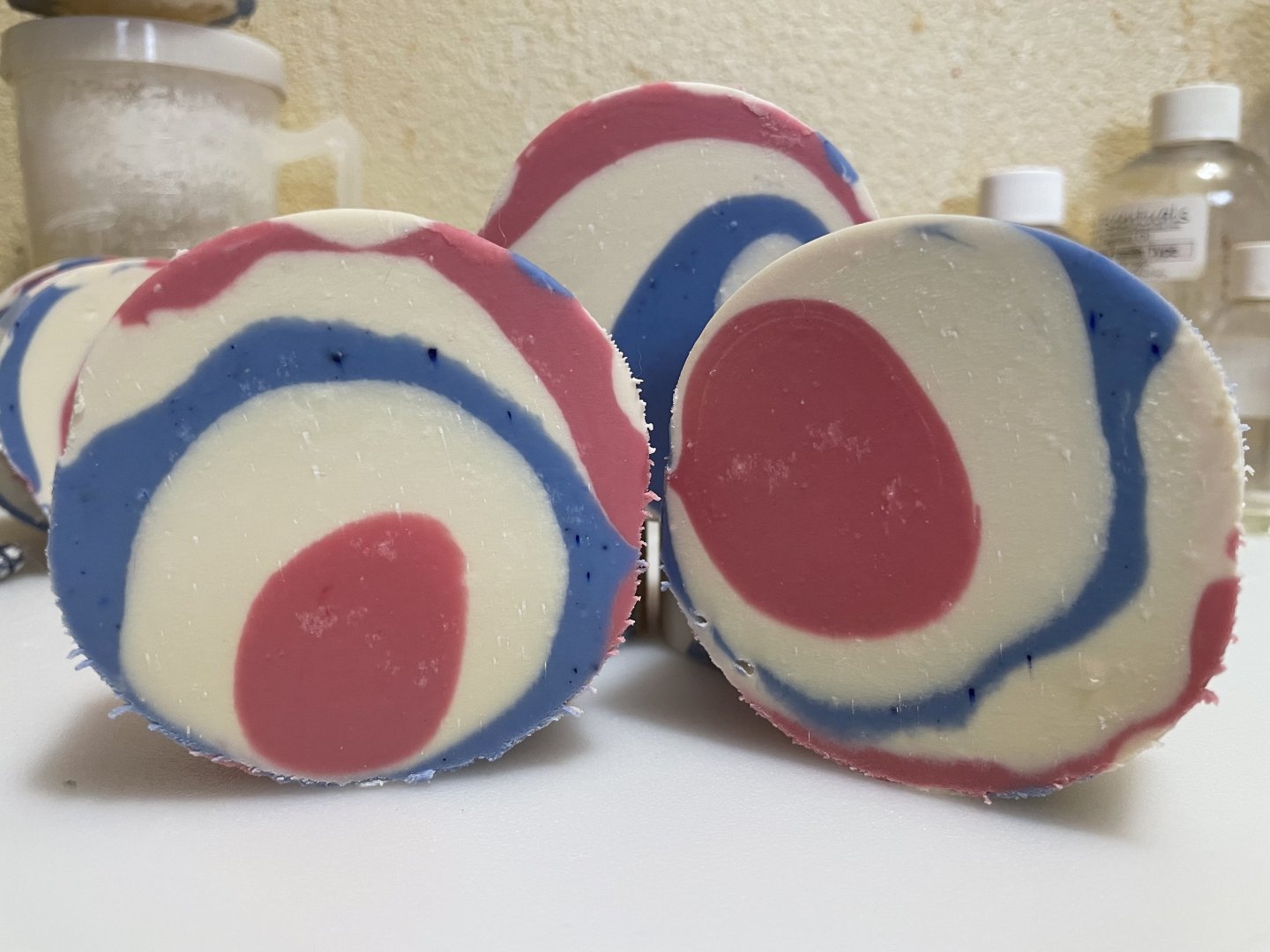 Here are the three soaps I made yesterday afternoon. They were a little bit tacky ‘cuz it’s really cool in the garage and rainy, but I was on a roll. And normally I don’t just colorants the first time I use a FO, but I’m trying to use up all my 1oz and 2oz bottles and if they work…great, I may use them again. If not, they will be ‘one-offs’ or I’ll donate them.


First up is Bayberry, colorant is Sienna Fine Mica; both from Rustic Escentuals. Just a nice, single-color soap that I will bevel on alls sides and stamp. 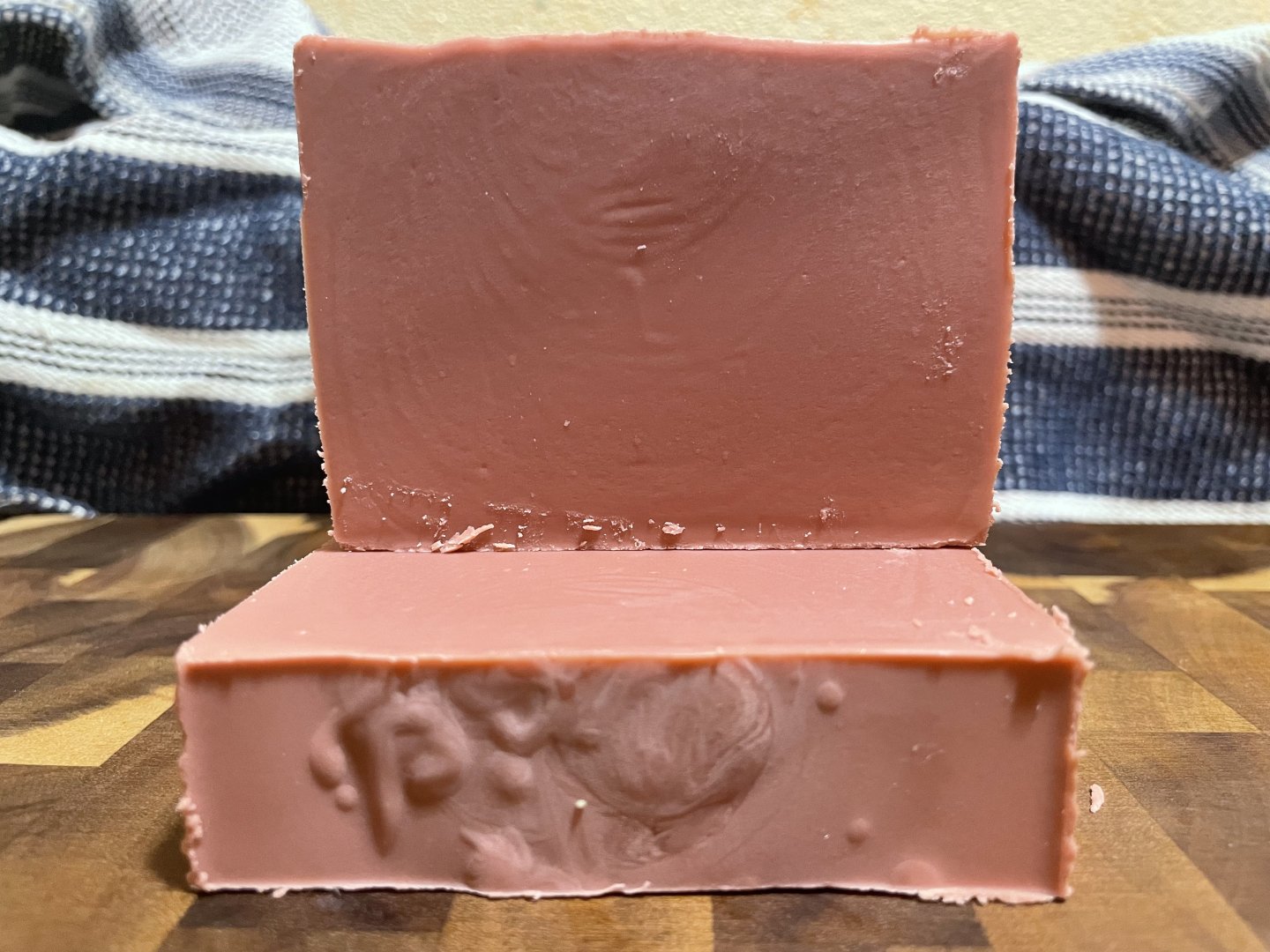 Next is Cuban Tobacco from Rustic Escentuals. I let my daughter pick the colorant and we went with equal amounts of Copper Mica from BrambleBerry and Toffeelicious from Rustic Escentuals for another single-color. We were chatting so I whizzed a little too long, but I really like the texture of the top from the pour (didn’t touch the top other than some light smacking. Looks like I got a little bit of gel action. 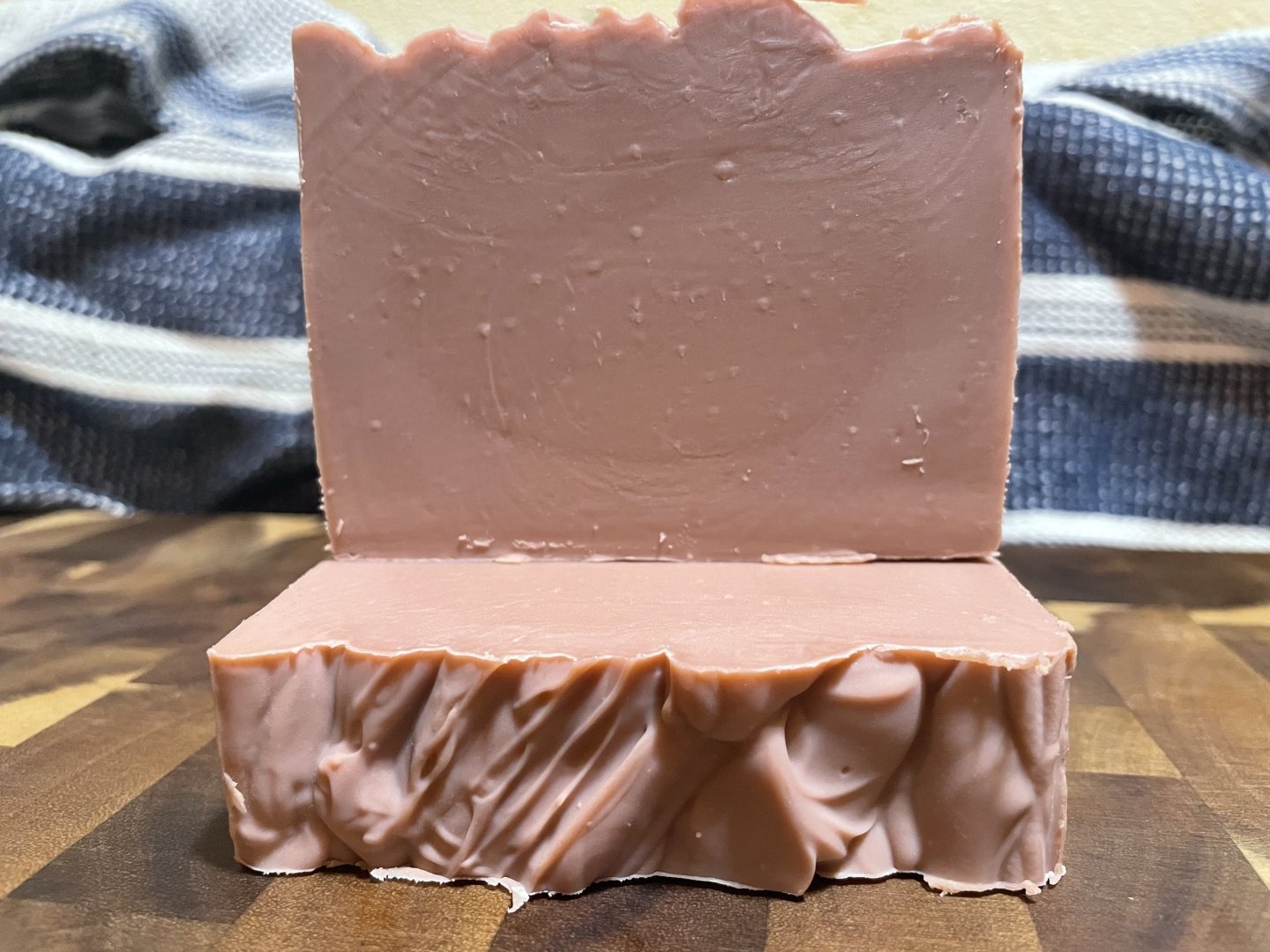 Last is Dark Chocolate Orange from BrambleBerry, daughter asked to me to order it. OMG, it smells just like those Chocolate Oranges you see at Christmas! With almost 5% Vanilla, I separated out for the second color which turned out to be perfect as I only had 1.75oz of the FO for a full loaf. The main color is a combination of Toffeelicious (RE), Brown Oxide (BB) and a generous amount of Hershey’s Cocoa, the orange is Sunset Orange (BB). When I first poured the Orange in for a Drop/Chopstick Swirl it made a weird ‘watery’ sound and bubbled near the surface, I thought maybe the FO had accelerated, but there was zero resistance when I out the chopstick it. No worries, it’ll be what it wants to be. Didn’t touch the top at all.

First thing I noticed when I got it from the garage was that I had gotten some soda ash and man…I really liked it! Not going to touch it. And the cut…wow! I was NOT expecting what I got. Definitely keeping a bar for myself These look great! I want to eat the chocolate orange bar

Lots of pretty soaps, soap tops and colors! Yum, you sold me on the chocolate orange.

@TheGecko Very nice collection of soaps. I like the variety. I don't think that I saw two the same.

Here is my latest soap. First soap in my new 5lb Nurture Soap Mold and left to sit for three days because we have set the record for the rainiest April.

I am massively pleased with how well this turned out. Every bar has a really unique swirl pattern which I know is from the difference between the two batters. My Dollar Store Jugs aren’t big enough for 5lbs of batter so I used my Dollar Store Dish Pan (only used for soap making) and I got a bit distracted and so my oils were warmer than usual and then I poured my Lye Solution and FO and just gave it a hand stir and had to run to the bathroom and then needed to disperse my colorant…so I used the Stick Blender a little more than I needed to. The batter was close to a Medium Trace when I separated soe out and then put the bulk in the mold. I then hand stirred the colorant and the little extra oil I used made it a little thinner. I poured it thinly from high up (fully extended arm), scraped most out, poured the last on the main on top, cleaned out the rest of the color and then swirled with the square end of my chopstick and put it to bed. 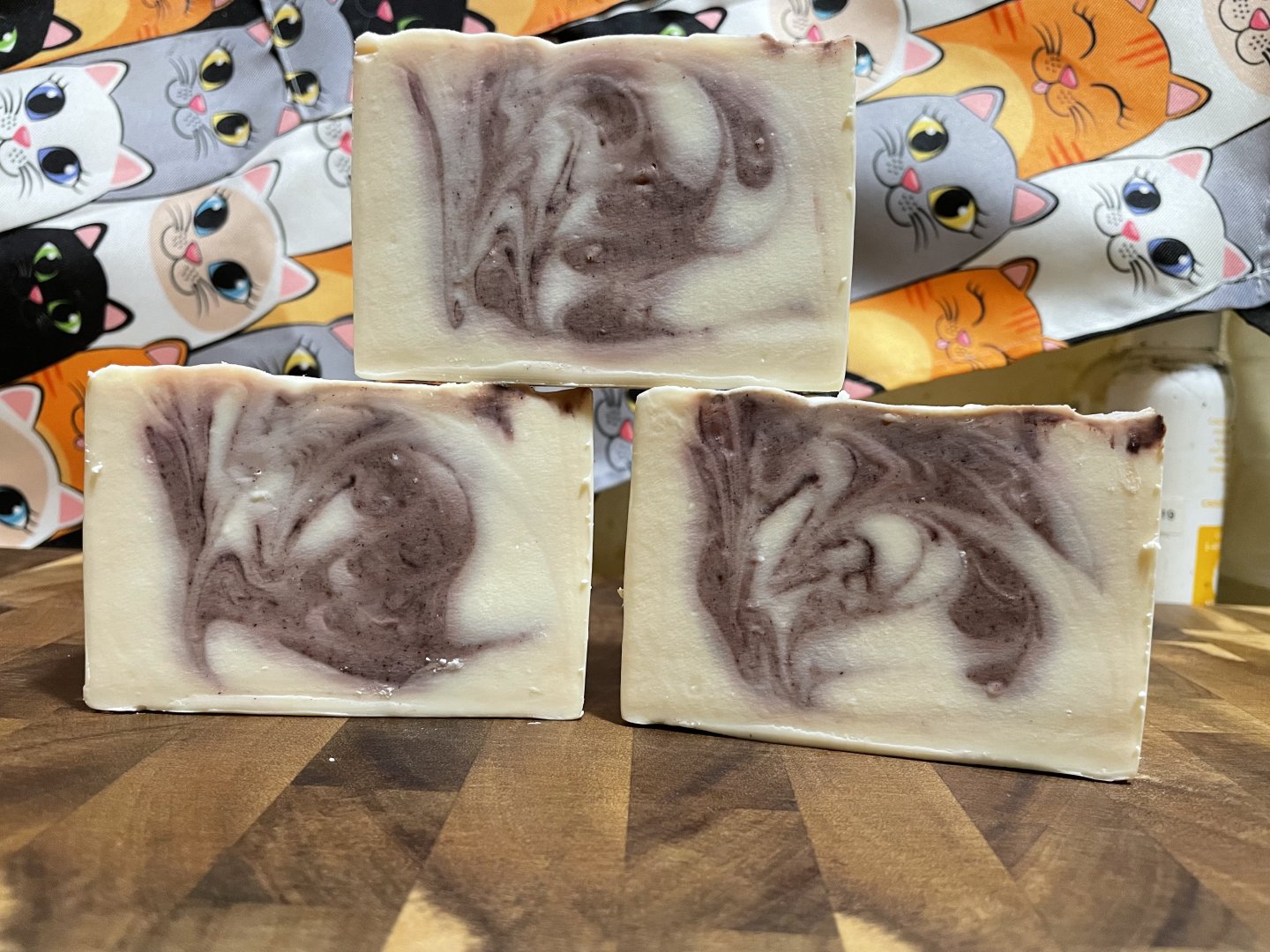