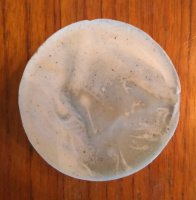 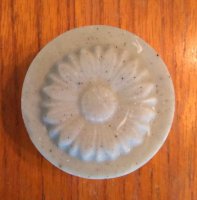 I made my first batch of soleseife a little over a month ago. It’s curing nicely, but a white film has gradually formed over the bottoms of the bars. It doesn’t feel like the usual soda ash, it’s slippery and won’t come off using the usual methods. Besides which, I sprayed the bars (all in individual decorative molds) with alcohol 3 times within the first half hour after pouring, which usually prevents soda ash formation on my bars.

Also, there are some small squiggly marks in white on some of the bars. I don’t think they’re lye, but don’t know what else they could be. Any ideas? Undissolved salt? It looked to me like the salt was very well dissolved, but maybe I missed something. I dissolved the salt in the water, then added the lye.

The soap set up very nicely otherwise and I tried it out today – very nice slip and not drying. But I’d like to know what’s causing these surface issues so I can avoid them in the future.

I think it's soda ash, looks like what typically forms on my soleseife and salt bars.

I've not done so many but I noticed soda ash is trickier to get rid off in soleseife compared to regular CP. At least in my case.

My regular CP soda ash wipes off with alcohol or hot water but my soleseife ash doesn't. I keep forgetting to try steaming them (I rarely CP that's why lol) or pouring hot water over the surface (saw that on IG).

However, the soleseifes I have need to be shaved to get rid of the ash. And sometimes it even comes back lol

It looks like soda ash. Spraying with alcohol on the top after pouring won't prevent soda ash on the bottom of the bars. What I do is shave off the excess ash or steam it off or both, depending on how thick it is, then I spray again with alcohol and polish the soap. Sometimes I do a boiling water bath, but less often because that's sort of an ordeal and it ruins the pretty surfaces. Sometimes the ash still comes back. In my experience, it is unavoidable in some recipes; I don't really know for sure if it is related to temperatures or not, but some folks have paid close enough attention to that with their own soaps to be able to predict it or avoid it. I haven't paid close enough attention to it to be able to do that with my own.

As to the surface strings of white, if it's lye, a zap test will tell you, so I suggest you do a zap test. https://www.soapmakingforum.com/threads/how-to-properly-safely-conduct-the-zap-tongue-test.63199/

Although it doesn't look like it on my monitor. I'd be more inclined to lean toward a salty string or artifacts, but without closer observation and the actual soap to explore, I really can't say. It looks too smooth (based on what I can see from the photo size you provide) to be undissolved salt, but you can tell better if it is rough or not since you have the soap to examine.