So, I've seen posts about sodium citrate all over the place (for chelating) and I bought myself some citric acid to add it to my soaps.

I've seen alot of people talking about adding extra lye to make their sodium citrate solution in their lye water. Since I'm forgetful when it comes to soaping, I kinda wanted to skip a math step. I wanted to make sodium citrate itself (dry powder).

I decided to use baking soda because its cheaper than sodium hydroxide but is also a base. The same can be done with washing soda if you wanted to (please note the amounts for neutralization with washing soda will be different. If you want to do that, just post here and I'll do the math for you)!

2. I added 400 ml of water to a pot and added the CA till dissolved. Then I added the BS slowly!! Remember vinegar + baking soda (or even bath bombs) it with fizz up! Let it stop fizzing before proceeding. You need to stir to stop it from overflowing. I also tested the pH w/ pH paper. I wanted it to be at least 7-8. I didn't want it to be acidic b/c that would up my superfat when I used it in soap.

3. I boiled it until the water was evaporated (maybe an hour). During the evaporation, for the last bit, it got syrup like. Then it started to cake the bottom of the pot. I recomend using a steel pot for this b/c you will get it caked on the bottom and may need to scrape some of it off.

The theoretical yield (amount of sodium citrate I should end up with) for the amount of CA and BS I originally used was 268 g. I got 321 g because I couldn't get all the water to evaporate. Not bad though.

Very cool galaxy! Thanks for the tutorial on homemade sodium citrate. I will definitely be trying this because I have plenty of citric acid and baking soda on hand for bath bombs.

Very nice. I will have to try this.

Quick question. Do you think that you could have dried it out further if you had put it in the microwave on low setting for a little while?

I didn't want to stick it in the microwave for fear of causing some small accident. Since a microwave causes water molecules specifically to move, thus creating heat, trying to heat something to the point where is contains no water honestly scares me...

If I wanted to dry it more, I would put it in the oven at ~210-220 F in a shallow pan or baking dish for a few hours. That should get most of the moisture out.

Also, glad everyone enjoyed this! I need to do something soapy and I'm running low on lye.
Last edited: Aug 15, 2015

AWESOME!!! I am going to do this tomorrow. I have a heavy pressure cooker pot that would be perfect for this. I have a ton of CA. I also just bought a 13# bag of baking soda at Costco. (OK, 5th grader time. I put "BS" but had to delete it because I was laughing too much. Why would I pay for BS when I have so much of my own already?).

I hope my Sodium Citrate turns out well. Now I've gotta find that tread again with DeeAnna's science-y explanation of the amounts to use ppo. It will be so nice not to have to add extra lye.

I'd like you to know that I chuckled while I read your post, Theresa. I thought about not calling it BS but... it is BS so...

"Honestly, officer, it IS sodium citrate. It says so on the pack!"

I am doing this now. It is on the stove at med-low and 66 deg, so it's starting to warm up. I only had 162 cm CA left. I mixed it with 324 gm distilled water until dissolved and slowly added 213 gm BS. Looking at your figures, you doubled the CA for water and rounded up on the BS. That's what I did. However, My pH is only 6. I used two different manufacturers, "LabRat" and the world famous "iDontRemember." I seem to use them a lot.

You said you wanted to keep the pH at 7-8 so it doesn't affect your SF. I always SF at 8% for an extra buffer in case I mess up on the lye. Especially since I use CA at 2% ppo. Now that I don't need to add extra NAOH with this, how will a 6 pH affect the SF? Should I just keep it at my normal 8% and leave it alone or do I need to lower/increase my SF to get the same-ish result?

FYI: pot is at 160 deg and tiny bubbles are forming on bottom of pan. Solution has turned from milky white to clear. I'm totally beside myself right now!! So. Much. Excitement. (OK. I really need to get out a little.)

Is it finished reacting (not bubbling and clear)? I found that the solution stayed acidic until completely reacted. I also added a little extra BS to adjust the pH to be neutral or slightly basic. Thats what I would do! I would just add extra BS until its pH 7 or 8.
Last edited: Aug 16, 2015

"ABORT! ABORT! We have contaminants in the pot."

Yup! Making sodium citrate is apparently very good for getting out deep down stains. Once I started seeing the crud, I just dumped a bunch of tap water in there an jacked up the heat. Now I have to find out if this is in fact the stainless steel I thought it was or just heavy aluminum. I'm guessing heavy aluminum. Thank heavens I didn't try this with NaOH!

In answer to your question, I thought it was finished reacting. It was not bubbling; however, it was not clear. Now, in retrospect, it was still reacting. It was slightly foamy. It looked like skim milk that has been heated. It was foamy, but didn't look like it was still doing anything, so I thought it was OK. I put it on to cook and then I though about dogging out the pH strips. It was 51 deg when I put it on and the 60 whatever when I tested it. I'll try again after I buy some more CA an this time I'll know to wait until it is clear with no bubbling before testing the pH and putting it on to boil. At least I've a clean pot.

ETA: oh, yeah! Presto Pressure cooker 409A is aluminum. Thank you for not making your sodium citrate with NaOH. I would most likely be dead or very sick right now! But, on the plus side, I have found an easy way to safely clean stubborn stains from pots and pans. And my pot is now ready to make clean sodium citrate. (Unless you think I should put this away and get out my huge stainless steel soaping pot?) 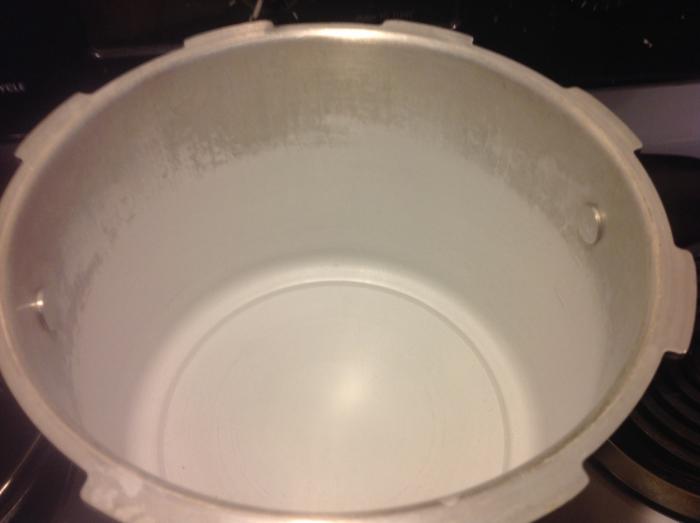 I believe the aluminum pot should be OK! I would also have just strained the crud out of the solution of CS I wouldn't worry about it too much. Did you already toss your solution?

Next time I would also test it when it gets around 100-130 F or so degrees while on the heat. This way it's more likely that the reaction has gone to completion. You can always add more BS at any point (except once it's dry of course). It will keep dissolving/ raising the pH as you add more.
Last edited: Aug 16, 2015

Yup. Totally down the drain. It was pretty nasty looking, kinda brown liquid more so than anything to be strained. The SC would have been grayish looking when it dried, I think. I'll pick some CA up at the grocery store tomorrow. It has an anti-caking agent in it, I don't remember what it is right now, but that won't make a difference, will it? I can always order the CA from Dianna's sundries and pick it up Tuesday. She might actually sell SC. But I want to make it. It's got more wow factor to it.

Ohhh, ewwwie, brown. Lol. Quick question, what did you use to stir it? If it was silverware with actual silver, it will clean that too. Baking soda+ aluminum+silver=tarnish remover on silver. It's pretty amazing. I did a little science fair project on it in high school. so, dont use metal silverware to stir it, else you might end up with more brown flakies next time too!

No metal but the pot. I used my rubber soaping spatula. Good to know, though. The bottom of the pot has stains on it, too. Do I just need the baking soda to clean it or do I need the CA, too? I don't know if my pot looked that good when I bought it, to be honest.

Lol. I have no idea about cleaning the pot honestly. I wanted to give you some explanation but I got nothing. I would think the reaction lifted the stains and the heat from boiling with the solution probably helped. Really don't know for sure though...

If you wanted to know for sure, I'd get 3 pots, purposely tarnish/burn something on them (same material pot or same pot just 3 times), and try one with just BS one with just CA and one with the CS reacting mixture. See which is best. Might be good to know!!

I am going to try it too