Hi fellow soapers,
Using my scale, setting at 0 to subtract weight for the container, I weighed out kokum butter, tallow and coconut oil. My total weight is 39.4 oz. After melting the weight is now 53.3-
8.5 for my container which is now a total of 44.8. I assume solid weighs more than liquid. Are the weights on soap calc for liquid weights?

Mass is mass. We weigh instead of measure.

Nope -- solids don't weigh more than liquids. Could you be confusing fluid ounces which is a measurement of volume with the use of weight ounces (called plain "ounces" compared to "fluid ounces")? They're not the same thing if you are measuring anything but water.

If you see a recipe using cups (or fluid ounces) to measure water, fat, or NaOH, that's not a good recipe to use -- ask here for sensible help and better recipes!

Weight and volume are both measurements. Weight is not strictly a direct measurement of mass, however. It's a measurement of how strongly an object is attracted by the gravitational pull of our earth, but mass doesn't depend on the earth's gravity.

For everyday purposes and everyday people, weight and mass are essentially the same, but they are distinctly different properties to scientist types.

On the earth, objects have weight (which will actually vary a tiny bit depending on where you are on the earth) and they also have mass (which won't change regardless of where you are). In deep space, far, far away from things that have gravitational pull, objects will have no weight but they do have mass.

Steve and DeeAnna, OP said she used a scale, or am I missing something here?

Goldenmom, your solid oils should weigh the same when they are melted. Did you possibly err when you were originally weighing them? If you are positive you weighed correctly, then is there a spatula or something in the bowl from stirring that you aren't considering (been there, it's why I'm mentioning it). You can always pour your melted oils into another container (set on the scale with the scale tared to 0). At the worst, you just have an extra bowl to clean.
S

I am voting that they need new batteries in their scale, or a new scale.

Thanks everyone for your help.
I've always used soap calc, with my digital scale, weigh my solid oils first, melt those then add the remaining oils. This is the first time I used tallow and Kokum butter, to solid oils, which is why I went to brain freeze when I saw the big difference in the melted weight.
I ended up turning my scale off and started over with an empty container. I added the oils to the container adjusting the scale to zero. The scale displayed the recipe's correct total weight. I suspect I need a new battery or I bumped something.
Thanks everyone!

Don't click on the link in the previous post by Sammay. Every one of this person's posts has a disguised URL and that tactic sure looks like spam to me. I've reported it.
J

To start i should say om very new to cold process soap. After a year of playing with melt and pours and never liking the soap i figured it was time to make them from scratch. I have very sensitive skin and have only ever used dove. I found a recipe i enjoy howvere friends and family say its not quite what they like. I really want to start creating my own recipes but im having issues understanding how to go about it. I typically use the brambleberry calculator because its so simple. It confirms my measurements for lye/ water ect. I want to make a dove like soap that is natural gentle moisturizing and bubbly. The biggest complaint i get is it lather well but is drying or it doesnt lather enough. Im trying to stay palm free and vegan. My question is how do i create my own recipe? The calculator that is most helpful seems to be soapcalc.net but it doesnt tell me how much water and lye to use. I feel like im missing a piece of the puzzle, hopefully someone can help thanks

Jenn,
Soap is cleansing. Look for a recipe / combination of oils that will have good midrange "bubbly" and "creamy" numbers but a low cleansing number. I typically make and use soap that has a cleansing number below the recommended range. ( I'm old and have sensitive skin.)
Soapcalc does allow you to change the water content but then you need to go to the bottom of the page #7 and "calculate recipe" then click on "view or print recipe". That will show you the weights of the hydroxide and water you are using. You can also use either KOH or sodium hydroxide as your agent . That is changed at the top left #1 entry spot ( check the box).

You may want to start a new thread for a better in depth discussion of what you are wanting.
There are lots of much more qualified soap makers here that can help you better than I can.

error - for some reason my post went to the wrong thread

Welcome, Jenn. I like the soapee lye calculator the most, but I have used the others you mentioned and others in addition to that, as well. Actually SoapCalc does tell you how much lye and water to use, but you have to go to the second page to see the result, and maybe that's why you're not seeing it.

Soapee works on-the-fly and makes changes to the results as you make changes to the recipe, which is one of the reasons I like it so much. But they all have their good qualities. It's really a matter of personal choice.

As for making your own recipe, it's a matter of practice and doing as much research as you are comfortable with, using either soapmaking books or other methods of research. I started with soapmaking books I borrowed from my library and its agreement with other libraries in the state. I tried some recipes I found in books and online, using non-animal fats (vegetarian) and eventually started designing my own based on what I learned. It can take a little time this way, but it's fun.

I suggest making small batches of no more than 500 grams total batch size so that you can practice the process and so you don't waste a lot of materials if you end up not liking the soap. Make sure to allow for at least a 4-8 week cure for any soap you make before you make a decision if you really like it or not. However some soaps need an even longer cure to be at their best. Pure (100%) olive oil soap is one such soap that benefits from a very long cure (a year or more - for me I like it at 18 months or longer). Some soap is great at shorter cures. It depends a lot on the make-up of the fatty acids in the oils.

Read through the beginners section, especially the Sticky Posts, and the Lye Section Sticky Posts for more information to help you find resources to get you started on this journey. Also, when perusing youtube soapmaking videos, beware that although there are MANY really good ones, there are also MANY not-so-good ones on youtube. So just keep in mind that anyone can do or say anything and post just about anything they want on youtube (or facebook or just about anywhere) and you can't always be sure it's genuinely reliable what they are doing or saying. So I recommend following safety suggestions you find here at SMF when making soap. If you are unsure, ask and we will gladly give you well-though-out feedback on what works and what might not work so well.

Some good soapmaking resourses are all over this forum, so I won't even attempt to list them here. But here's a couple to start with:
http://soapee.com/calculator
https://www.modernsoapmaking.com/the-most-popular-fatty-acid-profiles-in-soapmaking/
https://classicbells.com/soap/soapyStuff.html
J

I'm an old member returning as I'm about to start soap making again and soapcalc seems to be down. Anyone else having issues with it?

Jaymy said:
I'm an old member returning as I'm about to start soap making again and soapcalc seems to be down. Anyone else having issues with it?
Click to expand...

It isn't loading for me right now either.
J

I can't find anything anywhere to say it's been taken down so hopefully just a temporary server issue.

Send me a pm and I'll share my spreadsheets.

There's also the soapmaking friend version that is being test on the forum now...
https://www.soapmakingfriend.com/soap-making-recipe-builder-lye-calculator/
Last edited by a moderator: Nov 5, 2018

MsBrenda said:
Does anyone know if there is a soap calc designed for HP soap making?

So far all the calcs seem to be for CP for the lye/water ratoi.

I usually take the lye amount recommended and round it off to the nearest .50. Take that number x 4 and that will be my water amount to mix the lye.

The soap takes a couple weeks to dry but at least it's workable to swirl and fill fancy molds. I haven't had any problems so far with smaller batches. 3 to 6 pounds.
Click to expand...

I use soap calc for my HP recipes. I use it as is and don't alter it at all and have not had any problem with it.
S

I am going to second/third/whatever Soapee.com for my most user friendly soap calculator. I like the way I can make changes on the fly and see them in action. I also like the printout (I only print page 1) for saving for re-use. Quite easy to use. I keep mine (now that I have some hard and fast recipes I keep re-using) in those plastic sheet protectors, and use a dry erase marker to check off what I have added. Then just wipe when done.

So, I am making a small batch recipe in Soapcal, BB and SMF for my 1#-4x4 mold, and I am getting all slightly different numbers, using the same water:lye/SF/ounces of oils. Soapcal and SMF have the closest numbers (using 2:1), but BB has way more water:lye than the other 2.

Yes it's normal. Different calculators make different assumptions about the defaults for superfat, water, and alkali purity. They use slightly different data sets for the fat saponification values. They're all reasonably accurate as far as the math that they do.

I've not spent any time figuring out why the BB calc is different, so I can't address your comment about that calc. The last time I looked at it, I thought this calc was overly simplified, so perhaps there's a setting that this calc hides from the user that you'd need to tweak. I suppose they did that to appeal to the very newest of new soap makers.

Anyway, I recommend you pick a calc and stick with it -- there is no benefit from comparing various calcs except to see which one you like to use the best. Soapee is another calc to look at, if you haven't given it a test drive.

Hi quick Q - I was just playing around on "soapee" calculator and then came back to this thread to try to better understand the characteristic: Cleansing

In this recipe experiment I got the result of 27 - above the range recommended. Does this mean it will NOT fare well in hard water?

I am not necessarily going to make this - I am trying to better understand characteristics.

Also - does every calculator define the properties terms in the same way? 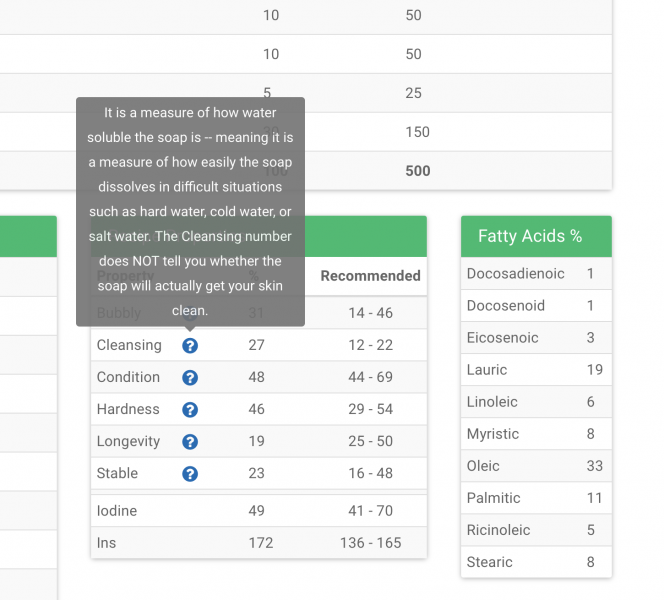