dubnica said:
I ran you recipe through soapcalc and your liquid (BUTTERMILK) is rrally low- only 27%. Did you add any water at all to dissolve the lye?
Click to expand...

Hmmm - the liquid amount does not look low to me. It is a 33.8% lye solution which is fine. A little concentrated, perhaps, for a beginner but with a recipe that is about half olive oil it should be absolutely fine.

I've found that working with water (or whatever) as a percentage of oils is not meaningful. Instead I work with the lye solution concentration.

For beginners, a of 28% or so is typically recommended, but when you work with recipes high in olive oil, lard, or tallow its fine to go more concentrated.

What I do NOT recommend for beginners, usually, is using milk for 100% of the liquid, but that doesn't mean it can't be done!
H

Hi all I am a teacher (male). I want to do some soap making with my students. I am new to this any advice on where to start with kids would be appreciated. My students are 12-15 years old. Thanks
B

My first time making a type of Castile, not a true but close.
8 oz frozen to slush goats milk
5 oz coconut oil
4.5 oz sunflower oil
12.0 olive oil extra virgin cold pressed
3.oz lye
This is a small batch, which I like because it doesn't commit you to having a bunch of one type of soap. typical cold process, pour into mold after trace insulate for 12 hours, remove insulation let sit another 12 unmold and let cure. I'm thinking atleast a couple of months, my bars were solid after a week. Still waiting to try at this point. I don't know if this is considered a true castile or not but it set up nice and traced after 25 min of blending.

I've only been soaping for a couple of months ... but I came up with this recipe. I really love it so I thought I'd share!
This soap is good in the kitchen to remove smells from your hands - also great for gardeners to remove dirt and grime.

I also experimented and added 2 Tbsp Vanilla extract and I love the way it smells.
C

Looks lovely, but keep in mind that soaps high I sunflower can develop DOS.
http://soapmakingforum.com/forum/viewto ... 260#224260

countryheartbeats said:
I've only been soaping for a couple of months ... but I came up with this recipe. I really love it so I thought I'd share!
This soap is good in the kitchen to remove smells from your hands - also great for gardeners to remove dirt and grime.

I also experimented and added 2 Tbsp Vanilla extract and I love the way it smells.
Click to expand...

Is that still the same for HP soap?
Click to expand...


HEC Teacher said:
Hi all I am a teacher (male). I want to do some soap making with my students. I am new to this any advice on where to start with kids would be appreciated. My students are 12-15 years old. Thanks
Click to expand...

I know this is off topic, but I saw this in the thread and wanted to reply. As a former teacher myself, I do not recommend you have your students using sodium hydroxide (the neccessary ingredient) for making soap because just a little on the skin will burn them and not to mention what it could do if it got in their eyes (and it does get messy). A demonstration in front of the class would be the only thing recommended. The other option is to use a glycerin base that you melt and pour and have students design. With high standards in schools, melt and pour bases would be too artsy craftsy if you teach something other than art being there is not a lot of science depth to melt and pour. Old fashion soap does have a lot of chemistry to it, though, and would be nice to use as a lesson if students do not actually mess with the lye and observe only.
V

sorry I'm new and this has too many abbreviations lol Is it olive oil, coconut oil? palm oil, hemp oil, castor oil? Is there a lye discount? Can you just do coconut, I don't have access to palm.
S

Here's my favorite go to recipe.

Choose what size batch you want and run it through soap calc to get the water and lye amounts. I usually superfat at 7% or thereabouts.

I've played with a lot of recipes, but this one is by far my favorite so far!

Hey! Can anyone give me a melt and pour soap recipe for a soap that is good for psoriasis/eczema?

I noticed from some of the recipes that quite a few oils and a few other ingredients are used in just one recipe. Wouldn't using many kinds of oils, like five or more, result in a higher cost per bar?
N

You're all gonna want to slap this newbie but where do you get all these? =)..

NurturedBellyDoula said:
You're all gonna want to slap this newbie but where do you get all these? =)..
Click to expand...

This was only the 6th soap batch I've made but it's my favorite so far.

After gel add:
1.3% of base oil weight Tea Tree oil (This leaves for a nicely present smell,
although I'm thinking it may be overpowering the sage leaf smell so maybe
next time I'll cut down on it by .25% of 1.3% and add a little more sage at the same time).

Mine was made in a crockpot. I even cut it only 12 hours after being in
a mold. At first it smelled strong but it has dried up and is harder than
my other favorite recipe involving 15% palm oil, 28% coconut oil, and 57%
olive oil.

Gel wasn't as clear as my palm/coco/olive oil batch. This time, gel
was much more like opaque/yellowish vaseline.

The bars are nice and green from the powdered sage, it's awesome.
On part of the batch I layered fresh sage leaves on the bottom which
look great, they're all grey-steel colored now. I used fresh ones,
which left dark/wet outlines around them because of the water from them
seeping into the soap. It came out well after they dried a little more.
Maybe it even helped stick them to the soap compared to what would have
happened if dried leaves were put on instead.

Next time I'll have to try not to get so many random soap scraps on the
sage leaves next time, they're hard to get off and it made the bars look
a little messy. The coolness of this recipe outweighs all of that though!
C

I make this in a blender. Comes out nice.

We tried this recipe, actually, it was the first batch we ever made and we love it!
Ended up doubling the oatmeal, didn't add the honey, and added 3% peppermint EO.

This is about 30min into cooking after trace: 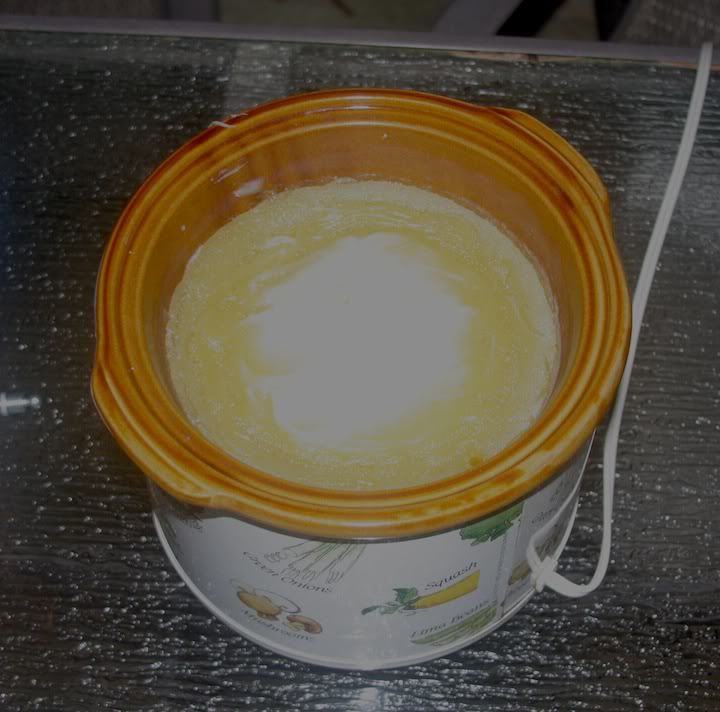 After full gel (an hour) we started stirring it: 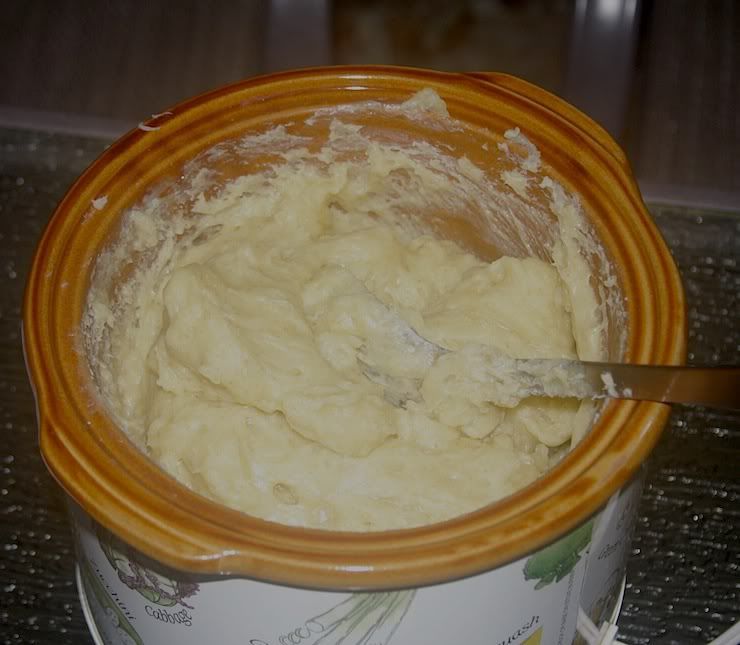 Then it was left around 100-110F for another 1 hour 20mins. During that time it was stirred occasionally. So, a total of 2 hours 20min cooking. This seemed like overkill, but we wanted to make sure it was done, then we had dinner which kind of extended the cooking. 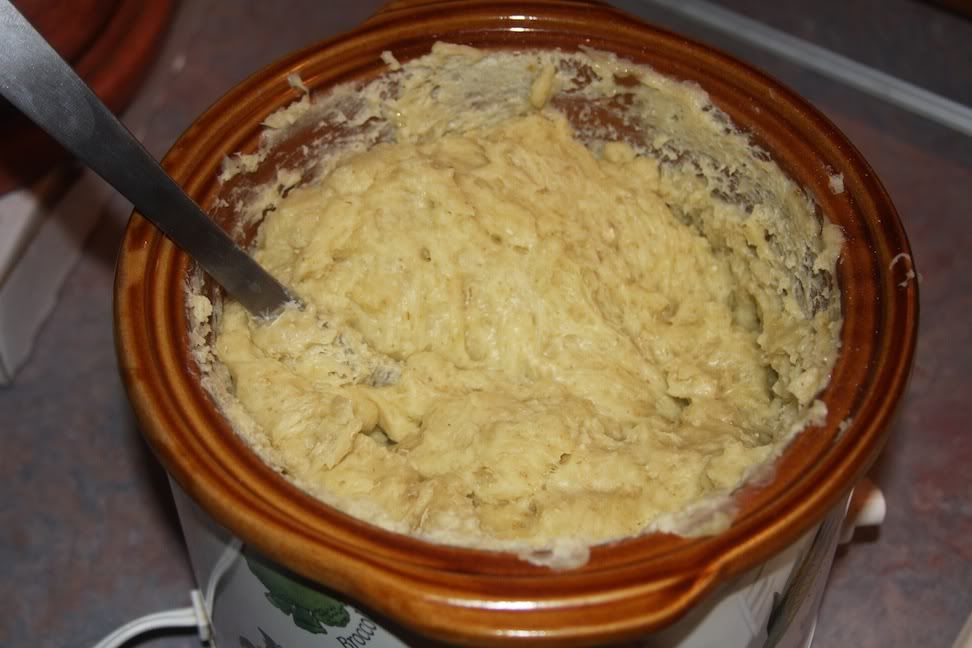 At that point we were convinced it was prettttttty done. There were some lumps in it, probably from the edges getting to 180F in the beginning, but also because some soap was left on the upper edges of the crock pot, and probably dried out faster/more than the rest of the batch. I think next time itll be important to keep it all as one and not let it smear on the edges and be left there to dry out. It wasn't too lumpy, but still, there were some lumps in the end.

After scooping most of the good stuff out, we were left with some drier portions on the edges and stuff, so I scooped it with my hand and mashed it into a soap cake to keep separate from the main batch since it was drier: 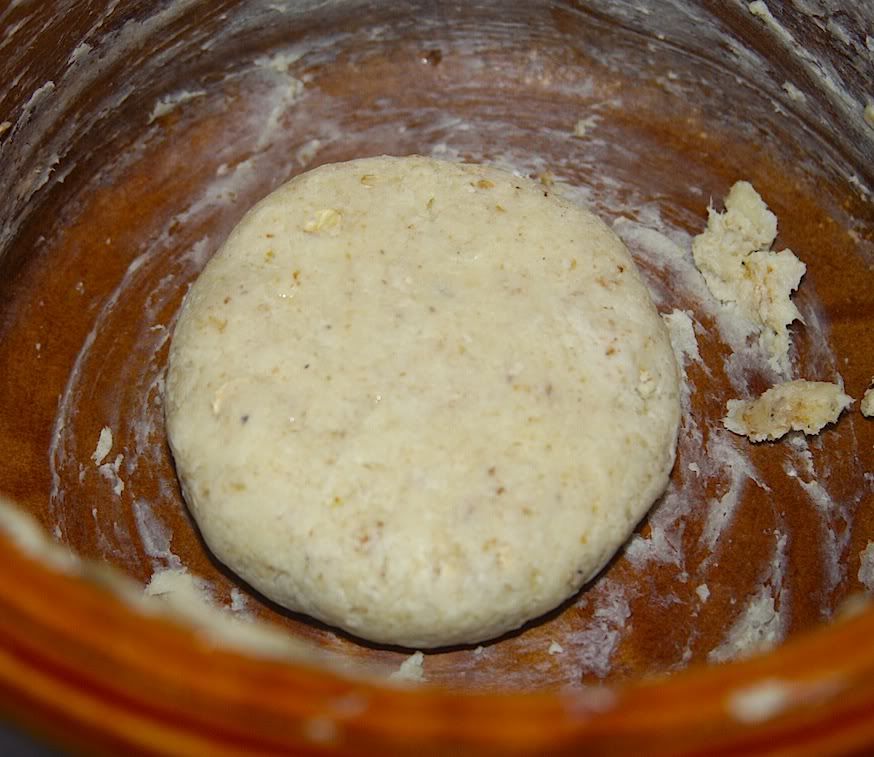 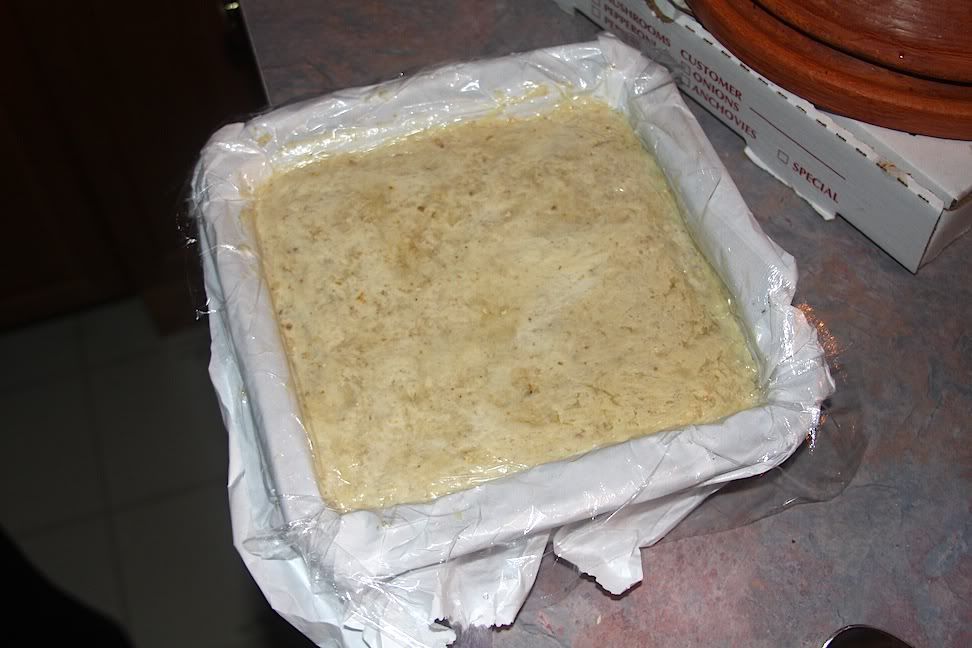 We tested some of the fresh soap, really nice and lathery and a good amount of bubbles. Didn't seem to dry the hands too much although it did have 28% coconut oil in it!

These things smell really pepperminty, you could get away with half the peppermint EO I bet and it'd still be decently strong.
Next time won't cook it so long and will add at full gel and not trace, also.

This is what it looks like 2 days after being cut. It seems to be firming up nicely so far. 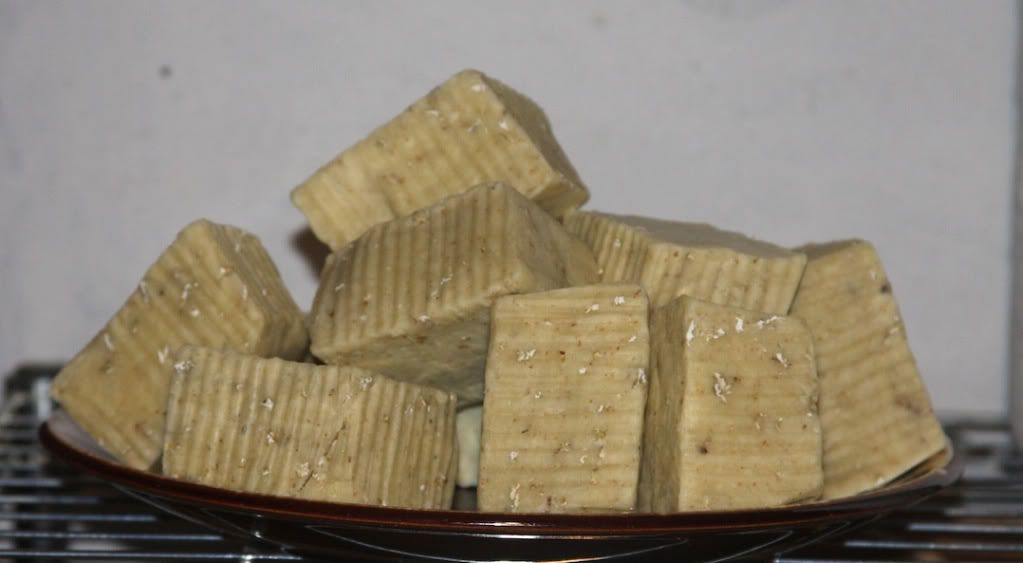 my favorite recipe is very, very simple.. maybe that's what makes it so amazing to me!

I am looking for a small recipe for the ingredients I have on hand: olive oil, cocounut oil, lard, goat milk, and lye. I also have a question regarding measurements. Can you use dry measuring spoons and cups or do you have to weigh everything?

It's best to weigh everything for accuracy. You could just make 75% OO/25% CO. I think this makes a good bastile and would be especially nice with goat milk.
B

I’m new to posting on this forum, but not at all new to making soap. After all these years though, I have yet to create a cold processed soap that doesn’t dry my skin. People who I’ve made soap for rave about it. They love it. It’s not too drying, not too oily, it’s just right every time for other people, but not at all for me. I’ve tried everything from attempting to drop the pH to adding tons of shea butter, to silk, more castor oil, less coconut oil, milk instead of water, etc. Is there some secret that I’m not familiar with? Could it be my age (I’m 43), I’m not drinking enough water, or the water that’s coming through the shower? I don’t know, I just want to make soap for myself that actually works on my dry skin. Is there anyone else who has this issue?

F
Where do you buy your bulk oils?

Fall is here (in the US) - favorite soup recipes? Here’s mine…..

What Would You Like To See Us Carry For You?