I suspect, from two failed batched of soap using the same recipe I have used for over a year, that they have changed their olive oil. Just warning everyone!

This is bothersome and disappointing. I use their olive oil as well. Batch failures could mean solvents in the oil. The last time I purchased any was Sept and am on the last gallon of that purchase which has been ok. Thanks for the heads up.

Rats! I use this OO as well, luckily I have 2 or 3 jugs in the freezer. How did the batches fail?

I also use this oil all the time. My most recent batch (a few days ago) was about 40% Sam's Club Daily Chef OO, purchased about a month ago in Moline, Illinois. It turned out just as expected.

How long ago did you purchase yours? I am guessing you purchased somewhere near your home in Texas. Has the labeling changed any? I don't recall a change in how the label looks, at least not with these last bottles.
S

The soap on the left is the first batch made with the old oil, cut at 8 hours (25% salt) after full gel. It hit thin trace after about 2-3 minutes of stickblending/stirring.

The soap on the right was cut at 8 hours after full gel. It hit thick pudding after about 10 seconds of stickblending. The texture is like wet sand, this is the best of the lot. Two bars are piles of wet sand because I tried to pick them up. 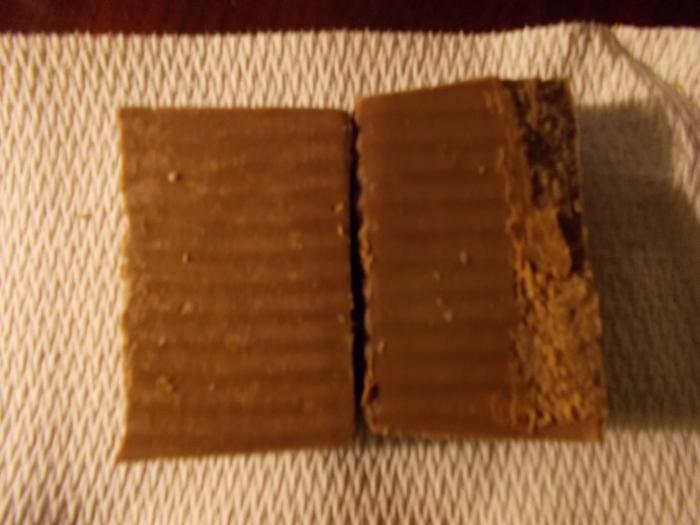 Arthur Dent said:
Rats! I use this OO as well, luckily I have 2 or 3 jugs in the freezer. How did the batches fail?
Click to expand...

I'm a newbie so this may seem a silly question but I'm curious: why do you keep it in the freezer?
K

BeesKnees said:
I'm a newbie so this may seem a silly question but I'm curious: why do you keep it in the freezer?
Click to expand...

If they are not using it very quickly it should extend the shelf life and hold off rancidity.
B

kchaystack said:
If they are not using it very quickly it should extend the shelf life and hold off rancidity.
Click to expand...

Is that for all oils?

How fast is very quickly? I've ordered a bulk amount (25- or 35-lb buckets) of some oils because I know I want to soap a lot and experiment this winter while the honeybees don't need a lot of tending/time. (They will require a LOOOTTTT of time in the spring to early summer.) The temps are mild enough now, but I was planning on storing my supplies (except for FOs because of their flashpoint) in the outside building where I want to soap. Is that unwise? Or would that be okay in mild temperatures but I should change it before it gets hot and humid?
K

Depends on the oil. In a dark cool place some oils are good for a couple years. Olive, HO sunflower, avocado, castor all have pretty long self life. Others, like grapeseed and hemp have pretty short shelf lives - especially once opened.

Since those jugs are pretty large - if you are not going to use one up in about 9-12 months or do not have a cool dark place to store them, freezing can help.

If your storage is going to have big temperature swings, I would find somewhere else to store them where the temp is more constant.
B

Thank you for the info. It's very helpful.

I guess it had to happen sooner or later, thanks for the heads-up Susie. I suppose its possible that this was a fluke?

That's what I'm hoping. It would be awful if we all (those of us who use Sam's Club) had to stop using a product we've been fairly happy with for so (however) long.
H

I really hope this isn't the case. I just bought 10 bottles from Sam's because it is the cheapest place for olive oil.
S

I am hoping it is a fluke! After the holidays I will buy some more (if they have a different lot #), and try again. My husband even says we should throw this away rather than use it for cooking. He says if it does not make good soap, no telling what is in it.

I went to Sam's today and looked at their olive oil... while I didn't have Susie's lot numbers with me for reference, I did notice that the labels on all the Chef's olive oil are all different from the labels on my older jugs. I didn't buy any.
Last edited: Nov 20, 2016