Recommendations for a degreasing hand soap

I've done my first couple of Farmer's Markets and been getting requests for a degreasing hand soap. In hindsight, I guess I should have expected that since I live in an oil producing area, with lots of men working in the oil patch, greasy hands, etc.

Googled a bit, and see citrus-y essential oils, and maybe coffee grounds might be a good idea, but any other ideas, suggestions with this kind of thing?

Any thoughts welcome, thanks.

Remember the old Lava soap? It's still available in some areas. That's what they're looking for.

Personally, my DH does not care for coffee grounds as a scrubby / exfoliant. Too soft. He prefers pumice or nut shell hulls for his scrubby. You would need fairly large amounts of Orange Oil to achieve the de-greasing affect, and the gents might dislike the smell. Having said that, *some* orange oil, combined with patchouli or sandalwood, maybe cedar, makes a masculine scent, they shouldn't protest about too much. You will need coconut oil for sure, at least 30%, IMO. You might see if they are interested in a BAR of soap, or perhaps a paste soap in a wide-mouth jar.

If they want a bar, they'll want a hard one that lasts. Castile is hard, but the cure is a hummer, and they don't really care about the conditioning properties. Maybe some coconut AND Palm Kernel Flakes. Lard makes a cheap, hard bar, that won't strip the skin. Castor at 5% would add some lather.

Good luck, and let us know what you come up with! I live in a rural ranching area with some folks working in the Eagle Ford Shale oil development, so I've been working on ideas too.

I made a kitchen soap 50/50 OO and CO - something really simple. I use strong coffee as my liquid and fresh coffee grounds in it. no scent. I like it. but for a more industrial use, I would also put a harder scrubbie in it. my bars get fairly hard in a month's cure.

My hubby doesn't like coffee grounds either, too scratchy for him. He does like fine pumice or amaranth seeds though. He is a millwright and often comes home covered in grease and hydraulic fluid.
I've started making a unscented pumice bar that has a bit more coconut so its more cleansing. Its not the most conditioning bar but it gets him clean. Citrus EO doesn't last long in CP, being a volatile oil it evaporate relatively quickly.

So much to learn....
i googled fixing citrus essential oils, and I see some people will use patchouli or cedar wood to help it stay, or even blending it in with castor oil first:
http://albaverdehandmadesoaps.blogspot.ca/2011/09/fixing-citrus-essential-oils-in-cold.html

Thinking out loud here, but I wonder if you could use canola oil instead of the castor?

Also, lemongrass might serve to help fix it, and maybe some citrus peel (instead of coffee grounds):
http://www.annelwatson.com/soapmaking/creative/July/citrussoap.html#thoughts

Starts to get complicated... I like to keep it simple, especially when fancy isn't what's called for in a soap like this.

I messed up a mostly coconut oil salt bar and made it 5% superfat instead of 20%, and half the liquid was coconut milk (no idea if thats important). Surprisingly even at just 3 weeks cure it does not leave my hands all dried up in testing, lathers like a dream and is scrubby from the salt. In a week its moving to the work boats for testing, but something to think about. I work on ships that really cant take much in the way of foreign matter in the sewage system (coffee grounds, corn meal, pumice...) but salt wouldn't matter.
Last edited: Jun 22, 2014

I have found that my most popular degreasing soap had finely ground pumice in it.

Castor oil will add bubbles, canola will not. Canola is a good, cheap filler. Some people claim DOS with canola, but I've used it up to 20% without problems. YMMV.

I often use oakmoss to help anchor finicky scents like orange oil. For men's soaps I've found that a lot of guys dig the smell of oakmoss in fragrance blends(myself included). Come to think of it, most of the fougere and chypre type men's colognes incorporate oakmoss somewhere in the scent profile. The only downsides to using oakmoss are that it is usually thick and viscous making it a pain to work with(especially the absolutes) and it is dark brown to almost black and can easily discolor a lightly colored soap. Wonderful scent though. For those who haven't had the experience it's reminiscent of a damp and mossy forest floor. Maybe not the best description and certainly not for use on its own, but in the right blend it adds that earthy, woody, masculine undertone that you can't quite put your finger on but can't get enough of...ok I'm rambling. Worked a double and may have had more than a few coffees and energy drinks to get me through the day, lmao!
D

The mechanics soap I make uses pumice and activated charcoal. I get a lot of repeat customers for it. I forget where I read about using the two together but it said the pumice scrubs out stubborn grease and the activated charcoal will make it easier to rinse it away. Not sure how true that is but the soap works well and when all is said and done that is really what I was looking for.

You make a pretty good sales pitch on the oak moss, scotsman. I will have to try it at some point.

I will put together a small recipe with coconut oil, lard, canola and maybe a touch of olive, with pumice, orange or citrus EO and cedar wood EO (I love cedar wood). I've had no DOS with canola, at least not so far.

Will try the activated charcoal also; wondered about it, as I want it to be a dark bar. (Don't have most of this on hand so will have to order.)

How much pumice to use? I've seen suggestions of 1 tsp per kilo, or 3-4 tsp per pound. Would this be uncured weight of oils - or total weight of uncured soap?

I've made two batches of pumice soap with the extra fine from WSP. The first batch was 1 Tbs PPO and it wasn't nearly enough. My last batch I used 1/4 cup for 2 lbs of oil. Its really gritty but not scratchy, perfect for greasy men.
D

onelittlemoose said:
Will try the activated charcoal also; wondered about it, as I want it to be a dark bar. (Don't have most of this on hand so will have to order.)
Click to expand...

It doesn't have to be all dark, here is a picture of mine: 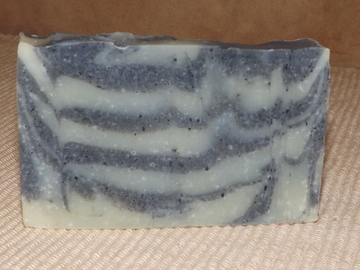