I'm making soap this afternoon and I want to try to add some cream to the recipe and don't know if there's anything special I should do. Normally I just cover my finished soap with a towel and let it sit 24-48 hrs but I see that some people put goats milk soap in the freezer or fridge for a while.

I've got a fairly large batch for me with 59.5 oz of oils to fill 3 different molds, so I don't want to screw it up with not handling the cream addition properly.

Thanks for any input on this. Also, I'm adding 5% of the oil for the amount of cream and will deduct that amount from the water. Is this what any of you use?

Thanks for any input!
June

I use cream in my soap and I do the split method. 50/50 water for the lye then add the milk to the oils before the lye mixture.

I gel my soaps so I insulate them and just check periodically to make sure it doesn't overheat.
K

Ditto what Shunt said, but with cream you might want to go lighter may be do a 75/25 split with lye water/cream as there is a lot more of fat in the cream. Typical fat percentage in whole milk is 3.2 while cream has minimum 30% and it will throw off your SF calculations considerably.
I would definitely add the cream to the oils and not in the lye water.
If you don't add any extra sugar to your batch, you might not need to refrigerate, but definitely don't insulate.

I added the cream to the oils along with the rose kaolin and the TiO2 and the colloidal oats. I only added 5% of the oils as cream in the recipe. I'll cover the the molds with saran wrap and won't wrap heavy towels around them; but I've got two shallow cardboard boxes that I'll put them in just put them in and check them often for over heating.

Thanks for the input. This is definitely a new experiment for me with all those additions.

So far the soaps aren't overheating in the cardboard boxes, so I guess the amount of cream I used wasn't enough to over heat the soaps.

On the other hand I think I may have another problem and I don't know what caused it. I discovered it when I was trying to do a little texturing on the top of the soap in the 1 lb square mold and I saw these little, tiny pieces of what looked like unmelted oils or???? The best way to describe it is that it looked like slightly lumpy gravy with tiny (about 1/16 or 1/32") round lumps.

My hard oils and mango butter were well melted in the microwave with just a few pieces still unmelted but very soft, and I stick blended them very well before adding the mix o the other oils;s o I don't know what could have caused this - very strange.

One other thing that came to mind is that maybe one or two of the raw materials were outdated. The mango butter I used has been refrigerated and has no date on it. The coconut oil did not mix well after setting the bottle in water, so I used a piece of dowel to mix it up as much as possible before pouring out the amount I needed for the recipe. There was no expiration date on that either. The palm oil was not out of date. Any ideas of what can cause this?

Did you mix the oils and cream before adding the lye?

It also could have gotten too cool when combining. With mango you need to soap a bit warm to keep it melted.

First I mixed the melted lard,palm,coconut, mango well after their initial melt in the microwave, Then I added the mixture to the Olive, Rice Bran, Castor Oil mixture Then I added my colloidal oats, rose kaolin and cream and mixed all very very well with the stick blender like the other oils.

Then I added the strained lye/water/tussah silk mixture and blended very very well for quite a while. I did soap at room temperature as I've done with my other soaps. My mixed oils were about 78 degrees and my lye solution was around 75 degrees.


Vkumudini said:
Did you mix the oils and cream before adding the lye?
Click to expand...

My last batch had the same amount of Mango butter and it was also batched cool because I was doing modified feathered mantra swirl on that one and I didn't have the problem. I sure would like to know what caused it so I can avoid it in the future.

Thanks for all the input everyone!


shunt2011 said:
It also could have gotten too cool when combining. With mango you need to soap a bit warm to keep it melted.
Click to expand...

Was the fragrance oil a new one or one you haven't tried before (new supplier?) It could be a form or ricing/acceleration where you get some of the oils to react and harden producing little clumps.

Or, it could be as others have said, that the oils/lye were too cool.Normally, with hard oils in my recipe, I stay at or just above the melt point of my individual oils to combat any issues with oils resolidifying. Not sure if this helps.

Thanks for the input Galaxy. The FO was a Nag Champa I've used before with no problem (same supplier).

The funny thing is that at the pour all looked fine - no indication of teeny lumps. It was only after I wanted to texture the top of the 1 lb loaf when it had set up a while, that I saw those tiny lumps.

I've used those same oils at room temperature soaping before with no problem, so this is definitely a head scratcher.

It's too early to unmold anything so I'll just have to be patient for another half a day or a day and see what the cut bars look like.

PS: There was no indication of ricing at all during the mixing. Are you saying that there could be a form of delayed ricing?


galaxyMLP said:
Was the fragrance oil a new one or one you haven't tried before (new supplier?) It could be a form or ricing/acceleration where you get some of the oils to react and harden producing little clumps.

Or, it could be as others have said, that the oils/lye were too cool.Normally, with hard oils in my recipe, I stay at or just above the melt point of my individual oils to combat any issues with oils resolidifying. Not sure if this helps.
Click to expand...

So here's the waves and they look really good and smell incredible. I do love Nag Champa! This time I added more of the rose kaolin and it's a lovely quiet pink - really nice. Even my husband thought the color was nice, called it elegant! 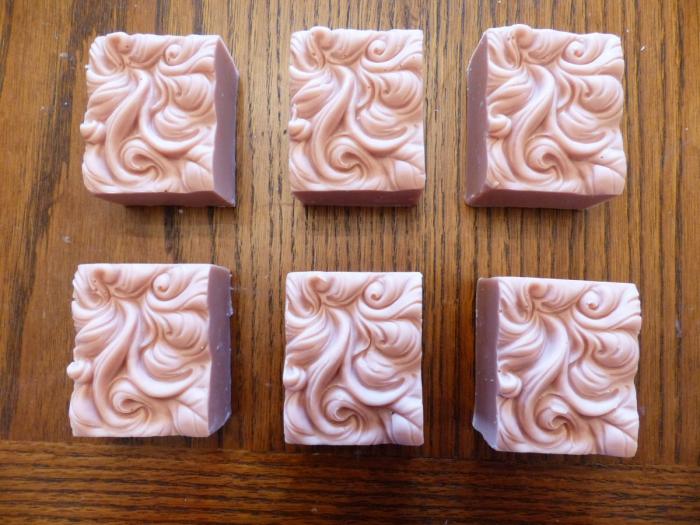 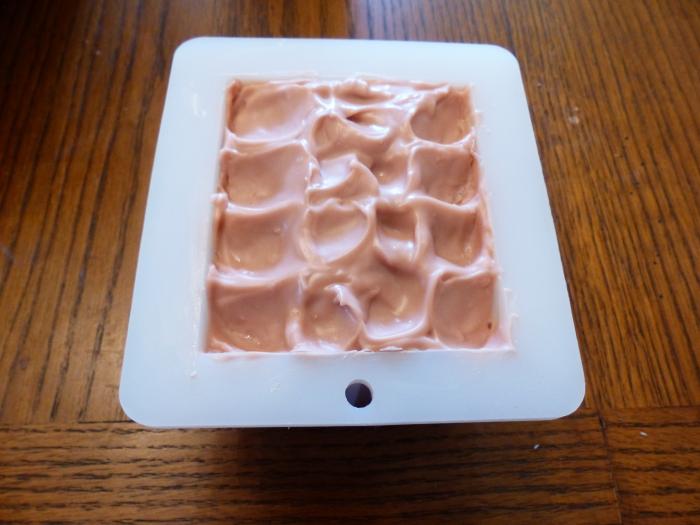 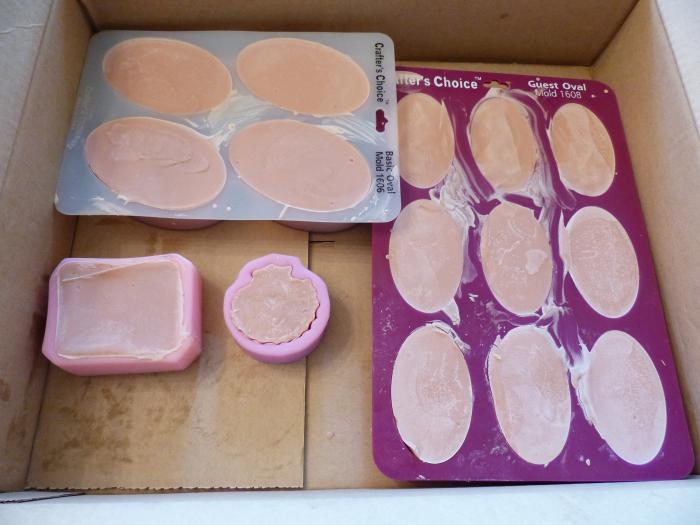 could it be stearic acid causing the dots? I have had that happen.

nonetheless, your soap is beautiful!!!
R

Those are beautiful soaps!!!

When I add cream I use the selection in the oil list as "Milk Fat (Bovine)" which is on Soapcalc. My soaps turn out really nice. I've never gone above 15%.

I'm always confused about the cream though b/c I know it isn't all fat, there is some water in it, but the calories say 100% from fat. My heavy cream is 50 calories w/ 5g total fat in 15ml. Water isn't listed as an ingredient but milk is and milk has water, so...

I'll have to check out that milk fat number. Thanks for your input!

Please don't put the entire weight of cream into a recipe as milkfat (butterfat). You could end up with a lye-heavy soap. The soap calcs contain an entry for butterfat or milkfat -- there's a reason why they don't list cream!

Yes, 100% of the calories come from fat, but there's water (zero calories) too! Ignore the percentages and look at the nutrition label for "X" grams of fat per 100 grams of cream. If you use 100 grams of cream, the milkfat is the "X" number. The rest of the weight is whey (aka water), so you might want to add that to your water amount.

S
How to use Mimosa hostilis in soap?