Yesterday I did the same with paprika infusion as I did with tumeric a few days earlier and got some weird results. I added my process for those who are interested, but marked it in italic, so it's easy to skip over.
I basically have 2 questions: is it possible for a colorless EO blend to affect the color of a soap?
Is it possible a soap gels different within a small layer of a layered soap?

Here's the process
I made some batter with 75% paprika infusion (in HO sunflower, other 25% CO) and some plain white batter with the same recipe, poured out 1/3rd of the colored batter, added white to make up the difference etc. to get layers of +-75-50-33-22-15-10% infusion. I attempted to do a straight line design by adding an accelerating fragrance (an EO blend called Highbrow with 15% clove) right before pouring.
Here's what the batter looked like: 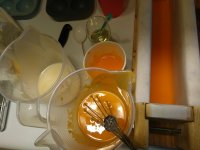 75% in the mold, 50% in the small cup ready to be poured, 33% in the jug and white batter ready to refill the colored jug after pouring.

Halfway through pouring the second layer in the mold, I realized I'd forgotten to add my accelerating scent, so I added it to the remainder of the pour, which got me a weird effect. I also popped the mold into the oven which helped speed up things tremendously.

My loaf mold was left in the oven to gel and it looks like it gelled completely (except the weird color separation within the layers)
I had some leftover batter that I used for confetti soap and didn't gel. 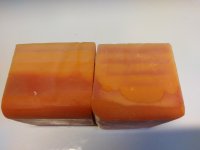 As you can see, there's a divide in the 2nd layer from the bottom, where the unscented batter was squished by the scented batter that looks like a yolk. Weird enough, the unscented batter looks like it has more reddish tones (though some of it looks almost uncolored) I'm wondering if a pretty much colorless EO blend (clove, peppermint, eucalyptus, cedar) could have affected the color or if some weird gelling process happened.
I made soap with paprika twice before, once I got pink (unscented, spent time in oven, but not sure if it gelled, lots of hard oils/butters) and the other time I got bright orange (EO scented and gelled, lots of soft oils)
The upper layers that were made while speeding up things in the oven all seem to be darker/pinkish on the bottom. I'm wondering if maybe I didn't blend my eo in the batter properly before pouring (I think I did..) or if gel really went funky on me. 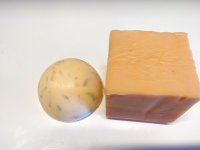 In any case, the difference in color within the layers makes it difficult to distinguish whether a higher percentage of infusion in the batter gives a more intense color.
75% is a dark reddish orange that really sets itself apart, 50% (the part with eo) is tho color of orange juice, 33% seems to distinguish itself a little still, but 22%, 15% and 10% all seem to be a pretty similar peachy color.

So, based on this I guess with paprika infusion you'd need a very high percentage for a very intense color, but for a soft peach, 10% is just about as good as 20% and gel helps to make colors more intense. Does anyone have similar or very different experiences with paprika infusion?
Last edited: Jan 28, 2020

@szaza I am getting error messages for your photos.

You do not have permission to view this page or perform this action.

Sorry! Edited to re-attach pictures. Are they showing now?
I first wanted to post in the photo gallery, but since I had so many questions I thought it'd be better to post in the lye based soap forum so I copy-pasted the post, but didn't re-attach my files (I think that must've been the problem)

I can see the pics now . That’s a good orange. I do have a feeling that different recipes (esp. lard vs anything else) affect the outcome with natural colorants but I really don’t have enough experience to pin it down.

Yes, I thought the different recipes were responsible for the different colors the first two times, but now I got a difference in color within the same recipe and I'm a bit stumped.. time to make more paprika infusion and try again

Mobjack Bay said:
I can see the pics now . That’s a good orange. I do have a feeling that different recipes (esp. lard vs anything else) affect the outcome with natural colorants but I really don’t have enough experience to pin it down.
Click to expand...

My paprika in a vegan, all soft oil recipe is a bright orange, even after months of curing. In my salt bar it was a dark yellow and has faded a lot since I first posted. In my 60% lard soap, where I used the infusion to color part of the soap, it's more like a peachy color. You're right @szaza, paprika needs more testing hehehe

szaza said:
Yes, I thought the different recipes were responsible for the different colors the first two times, but now I got a difference in color within the same recipe and I'm a bit stumped.. time to make more paprika infusion and try again
Click to expand...

Would you mind disclosing your infusion procedure, with weights, temps and times, please?
It seems appealing to me: the colour is good and the material is more easily accessible than madder.

Of course!! I used the procedure described here, which is 1 part plant matter to 15 parts of oil. (I did this by weight). You can either do a cold infusion, by letting it sit for 6-8 weeks and shaking regularly or hot infusion, where you leave it in a water bath for several hours (2-6, I'm generally doing 2-3 hours). It works for a lot of different plant colors

Thank you, Szaza, the instructions on the link is very exhaustive. 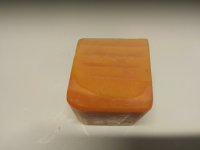 I think I see some fading already.
Edit: quite a bit of fading actually. I seem to tend to forget how my soap looked cut and not notice fading until I compare pictures side by side
Last edited: Feb 23, 2020

About time for an update. The soap is now 3.5 months old. 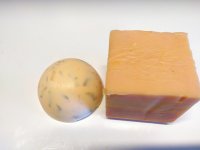 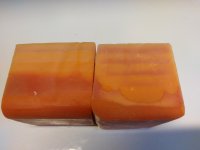 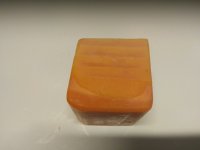 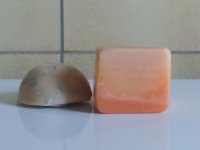 It faded quite a bit more, but the color is still pretty.

A while back I did a comparison of different colorants added to lye, at trace or as infusion. I used almost the same recipe as I did with this soap (although I made a new infusion with paprika in olive oil instead of Ho sunflower that was added at 20%). After about 6 weeks the infusions faded completely! 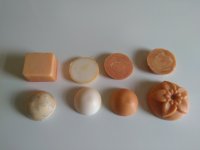 It's curious to me how these soaps faded so much more. It could in part be storage conditions. The square soap was wrapped in paper and stored in a cardboard box, the little ungelled confetti soap was stored in the basement without any cover, while the soaps made in march are covered with cloth (so I don't have to unwrap anything to check up on them), but also stored in the basement which doesn't get much light.

I also used paprika in a soap with 40% shea butter and it seems to have the same hue as the 75% HO sunflower soap.. so far for my theory about FA profile influencing the color 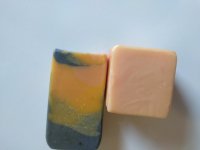 (Upper right corner of the left soap is colored with paprika at 20%, this soap didn't gel, right soap is the top of the soap made in January)