Does anyone have any experience with any of these in cp? The top one is fragrance buddy.. Bottom is maple. 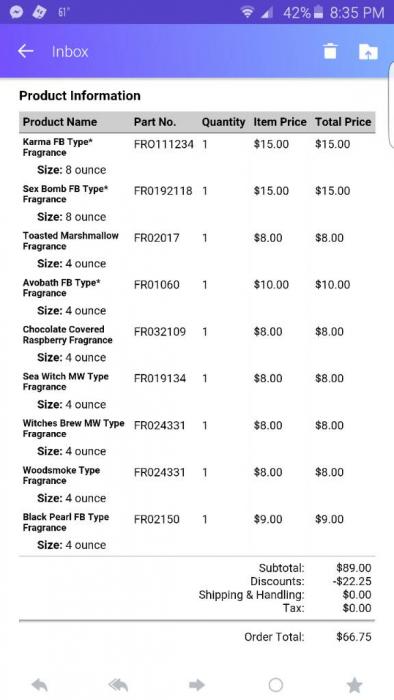 I've tried the Black Pearl from FB. It's definitely more sugary than herbal but it behaved well and did not discolor.

Karma did not discolor and was heavy on the Patchouli. Medium strong scent and holding. It is not my favorite Lush dupe. Sex Bomb isn't fully cured yet and may change but right now it still has some harsh notes in a floral background. Black Pearl smells better, a bit sweet, a bit floral in a complex background. The MUR is 4% on this one. Neither of these discolored. You may want to check the usage rate on the ones you want. I know Witches Brew is only 0.75%.

What is mur? Thanks I will definitely check usage rates before. Using

And just making sure. Usage rate goes by pound of oils right? Not including water (final product weight)? And if one usage rate is let's say. 75 can I put that in and then add another with a higher usage rate with it?
O

I love the Sea Witch, but it needs a little extra TLC, just soap cool, and don't water discount too much. I was able to do a two color tiger stripe, but next time I will probably just do a drop swirl. The scent is holding really well, and smells the same as the day I soaped it. Don't know if you use lard, but this FO will be much slower to trace with a recipe that has lard included.
Sex Bomb was easy to soap, had plenty of time to use four colors, didn't notice any discoloration. For me this scent held very well at 1% FO per pound of oils used.
Karma was a very well behaved FO, no discoloration, or acceleration. The Witches Brew has a very low usage amount, so check that before you soap, you may end up blending it with another FO that has a higher usage amount.

I don't have any experience with any of the ones on your list. However, I just started ordering from Maple Street and I'm really loving their scents. So far I've used their Lilac, Love Spell and Fruit Loops and I've been pleasantly surprised with the quality of each. I guess after awhile you have to stop being surprised and just say they have quality scents. However, I'll test a few more before I go that far. I'm digging the sale that they have going on right now though. So I guess I'll have the opportunity to try a few more.
O

Sorry didn't see the other posts regarding the same FO's, or your post asking about the usage amount. I have used a low usage FO and blended with one that has a much higher usage rate. But the 0.75 on Witches Brew is the total amount, not per pound. So you would be using it more like an accent to another scent.
S

My understanding is the maximum usage rate (MUR) listed on the IFRA is percentage by total weight of product. 1% is 1g per 100g total product. I use the weight of the batter all inclusive (oils, lye and water).

FWIW, I'm finding that many of the FB FOs continue to change after the 6 weeks cure time. Some are improving significantly and getting stronger the longer they cure. Just something to keep in mind if you don't initially like something you purchase.
O

Commoncenz does the Lilac accelerate? I am using the one from Candle Science, and it is really fast, beautiful scent, but kinda looking forward to finishing off the bottle. All of a sudden I am seeing Maple Street mentioned everywhere, I looked at their website, and they have great prices even without a sale.
O

Soapmaker145 maybe I have it wrong, I usually soap at 1 ounce per pound, and look for the FO that lists 6% or greater. I always get my numbers twisted around unless I am focused on the recipe.

luebella sorry if I made things more confusing, it was late when I responded. I always twist around what I mean when I say the percentages. So I know someone else can explain it clearly. I usually aim for fragrances that I can use on the SoapCalc from .80 to 1.00 per pound. When I soap most oils below that I'm not happy with the results.

Thanks! Is that per pound of finished product or oils? Lol
S

The maximum usage rate and the actual usage rate are two different things. The usage rate can be anything you think is good enough to scent the product up to and including the MUR. The MUR is what experts consider the maximum percentage that you can use safely. It doesn't mean that is the amount you should use. I'm doing my tests at 5% of the batter weight which for me is the maximum amount of fragrance I would add to a soap. For some FOs, 5% is overkill and I plan on reducing it in the final soap. Others are faint even at 5%.

The usage rate recommended by suppliers is per lb of oil because of variable water usage rates.

I took a quick look at the IFRA site to see if they provide more specifics about soap. I couldn't download the document I wanted to read. I kept on getting "bad request". I prefer to stay well below the MUR . Olive, I'm using the same strategy you are using.

Soapmaker145 said:
My understanding is the maximum usage rate (MUR) listed on the IFRA is percentage by total weight of product. 1% is 1g per 100g total product. I use the weight of the batter all inclusive (oils, lye and water).

FWIW, I'm finding that many of the FB FOs continue to change after the 6 weeks cure time. Some are improving significantly and getting stronger the longer they cure. Just something to keep in mind if you don't initially like something you purchase.
Click to expand...

luebella said:
I saw some with 30 percent mur! I guess to be safe I'll always do per pound of oil. And test with usage rates under max
Click to expand...