A friend of mine was given a soapmaking class as a Christmas present. The first night was a demo; second night, they made their soap. Each student made a 46 oz batch with the following recipe.

As near as I can figure, that comes out to this. Opinions??

(Apparently, the teacher told her class that this is the only recipe she ever uses, that saponification only works if the oils and the lye are at 100F and the soap must be wrapped until cool.) 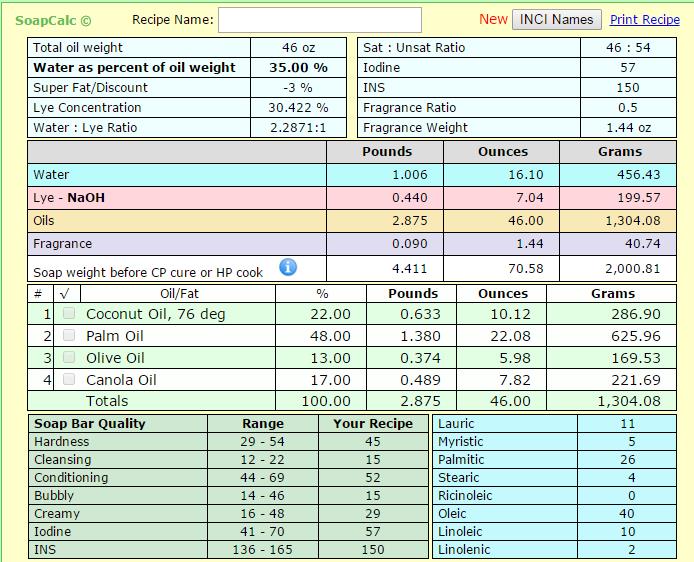 Why did you change the weights? If checking a recipe, it important to keep oil amounts used the same. I ran the original through soapcalc, the numbers are the same as yours but I got a slightly different but not enough to matter lye amount.

Seems like the SF is between -2 and -3, this would be a drying soap to me. IMO, it would be better with a 5% SF. Besides that, it seems ok. Has decent numbers but I'm not a fan of canola. I would have rather used more OO or a different liquid oil like HO sunflower or HO safflower.

Sounds like the teacher isn't that well informed about soap making. Just because someone can follow a recipe and charges for a class doesn't mean they are actually qualified to be teaching. You should direct your friend here, they would get much better advice.

Any chance they used a milk or something else that added in more fat? I think it's odd you'd teach someone with a negative superfat.

Also wondering if the class included a lesson with a soap calc??

Obsidian, when I turned the recipe to percentages, I came up with 95.5% oils. All I did was make it add up to 100% for the sake of inputting it into SoapCalc.

A couple of weekends ago, I gave my friend a soap demo and directed her to here (she hasn't joined yet) and to SoapCalc. Apparently, the teacher prefers sage.com's soap calculator and put down SoapCalc.

I, too, thought it would be a very drying soap, nor would I use canola but that's only because I dislike canola to cook with and won't have it in my house.

CaraBou, there were only two sessions in this class (for $139.00); the first night was a demo. Second night, the students made their soap, a 48 oz batch, which I thought was a huge batch for a first ever batch of soap.

I had considered taking this class at one point. Now, I'm glad I didn't. It truly does sound like this teacher really doesn't know much at all.

Here are a few things my friend wrote:

she doesn't play around with other oils because she says she doesn't have good results...
Click to expand...

the thing I found funny was she said the lye and water and the oils had to be at 100F in order to work....and that we have to wrap the soap up until it has totally cooled
Click to expand...

thought that was weird...she swears that the sobifaction (or what ever you call the chemical react is ) wouldn't work unless you do that!
Click to expand...

The MMS calculator assumes NaOH is 100% pure, but the real life NaOH that soapers use is closer to 95% purity or less. That means there's a "hidden" superfat built into the calc of at least 5%. (And that's true for the other calcs I checked, including soapcalc.) So this lady's recipe ends up being slightly superfatted by a few percent, and your friend's soap is most likely okay.

It sounds like the teacher is making soap by rote rather than really understanding what she's doing. There's nothing wrong with that if you never change your methods or recipes -- that's how my grandmother made soap -- but it doesn't give a person much flexibility to try new things or to troubleshoot problems. And a recipe calling for 46 ounces of fat is huge for a first batch.
D

I think her recipe is kind of lousy though.

100F might be a good temp to soap at, however saponification happens at any temp - I believe this is where the error is, not the temp itself. For those in the class who don't know better, this might cause some frustration - what if temps go below that? Does it not make soap then? It's still gonna make soap.
You must log in or register to reply here.
Share:
Facebook Twitter Reddit Pinterest Tumblr WhatsApp Email Link