Hello, everyone! I recently made my first batch of goat milk, oatmeal and honey CP soap. I noticed the loaf had brown speckles throughout, which it did not have when I poured it yesterday. As I cut it, I noticed dozens of tiny amber brown droplets oozing from the soap. I cut the rest of the loaf, and each bar has it. Any idea what it might be?
I soaped at room temp and did the CPOP method to ensure complete gel, as I wanted the vibrant yellow and gold mica to really pop... Nonoe of the colors seemed to have survived in the soap except a few mica lines, which were intentional. (The color is not a concern, but I mention it just in case it's helpful.) My lye is good, I put fresh batteries in my scale, my ingredients are fresh, I didn't use fragrance oils or EOs. Could it be the type of honey I used - raw and unfiltered? I've included a screenshot of my recipe. I replaced the water with goat milk, and used honey in place of the fragrance. I added 3tsp of colloidal oatmeal at trace, followed by the honey. I really appreciate your help! TIA!

Looks like little specks of honey that didn't get fully mixed in.

I agree with Obsidian.

Don't add stuff at trace without a very good reason. You aren't protecting anything from the lye because NaOH is still quite active at trace. Also, you risk having problems like this because it's harder to mix ingredients into the batter properly. Last but not least, it's surprisingly easy to forget an ingredient if you try to add it later in the soap making process.

The only time I add something at trace is an ingredient that causes acceleration, such as pine tar and misbehaving fragrance oils and essential oils.

Soapers like Irish Lass recommend dissolving the honey in the water before you add the NaOH. There is less chance of overheating compared to adding the honey to the oils or to the soap batter.

+1 on the honey speckles. The oozing will probably reabsorb a bit with time, but the speckles won't go away. This won't harm the soap, but may attract fruit flies. Ask me how I know...

As for the colors, what brand of colorants did you use? It's important to use specifically CP-stable colorants. Most of the craft store colorants are only for MP, or are only stable up to a certain temperature.

Also, some of your ingredients probably contributed to the overall tan color of the bar, including oatmeal, GM, and honey for sure. The shea butter, olive oil, and cocoa butter could also affect the soap color, depending on what color those were before you soaped with them.

I agree with the others that's it's the honey. I dissolve mine in a bit of warm water and add it to the oils before my lye. Also, that's a lot of soap for a first / beginners batch. You may want to keep your batches at 500 g. Also, you may want to use fewer butters/oils until you have the hang of things. That's a lot of oils for a beginners recipe.
E

Thank you, everyone! I added the honey at trace because I wasn't sure if the honey would cause rapid acceleration. I'll try dissolving it in the water next time. The micas I used were from Mad Micas and Brambleberry. I knew the soap would discolor to a tan color, but I was hoping to bring out more of a golden tan by adding a bit of yellow and gold. No big loss, I'll save the micas for another soap! Thank you again! I'll pick up a cheap crock pot and try my hand at rebatching with this loaf!

Not all gold micas end up looking like GOLD when mixed into the batter. I have got some sparkles of gold to show up in one soap, particularly when it's wet and held up to the light from the kitchen window. In other words, I really have to work for it to see it in that soap. If the soap is just sitting there in the soap dish with no light on it, the gold doesn't really show much.

Speaking only about the color. Your additives are most likely the reason why your micas didn't work. Even though you bought your mica from reputable company, you can still get a bad bach. Also some micas are not soap stable and you have to check the description. I learned that the hard way.

Honey can cause overheating during saponification (after the soap is in the mold) just like other sugars and it can cause discoloration to tan, but I haven't heard anyone say it causes a lot (or even any) acceleration in the soap pot. I haven't used honey myself, so I'm sharing what I recall others have said.

I just made an oatmeal, milk, and honey soap this past weekend. I used local honey, colloidal oatmeal and full fat milk mixed into my oils with my stick blender before adding the lye, which was dissolved in water only. As soon as the lye hit the oil mixture, it turned a brilliant orange.

The batter was poured into a wooden mold and was placed on a stool in front of a fan, blowing over it on low. Even so, it overheated and cracked slightly. It came to full gel and I can even see that, had I not had the fan on it, it would have overheated even more and would have had a hole in the middle, which happened with my last batch of OMH. (See the attached photo.)

OMH is not one to CPOP, as far as I'm concerned. It's a definite candidate for overheating. When it came out of the mold, it had a fairly strong ammonia smell; now, after a few days, it's smelling like the fragrance oil I used (Oatmeal, Milk & Honey) and is an even tan colour.

I'm writing this, not to trouble shoot or anything but just to let the OP know that OMH is a tricky soap to begin with because it's such a heater (milk and honey are known for it). The method above is how I make mine and this time it worked just fine; last time it didn't. If I'd only made a small batch (1000 grams of oil), I would have put it in the fridge right after making it. This time, I made a batch that was more than double the size and that mold won't fit in my fridge. Had it been winter and snowy out, I'd have put it outside; instead, I had a fan blowing over it and that definitley helped to keep it from overheating disastrously. 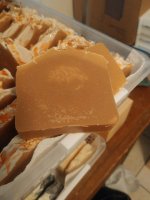