I made my third batch of soap yesterday. Didn't have a good place to put it and had to go take care of some other stuff. My DH suggested I put it in the bath tub with the curtain closed for the time being. Fast forward to that evening. He turned on the shower without opening the curtain, questioning why it was closed, and then remembered... We both poured the water off the tops as quickly as we could. Laughs were had but luckily it doesn't look too bad this morning.
Four different scents from NG: Chai Tea, Narcissist, Vamp Vogue, and Giggles.

When I mixed the lye and milk (frozen), the liquid got a lot of tiny lumps in it. My guess is it was from the milk fat as I'm pretty sure the lye was totally dissolved. I saw somewhere to strain it if that happens but I didn't and am wondering if straining is a must. Couldn't see the lumps in the bulk mixture but now they're visible in the pinkish soap. Can't really see in the photo but it discolored to pinkish with white specks. It's saponified milk fat, right? Is that a DOS risk?

Edit: I thought the pink one would be Chai.. Maybe it is. The useage was listed at 1% and that soap barely has a scent. Can't tell between it and what might be Vamp Vogue. Can smell Narcissist and then another smells like bubble gum to me. That might be Giggles except I thought it was supposed to be more citrus. Hmm.. 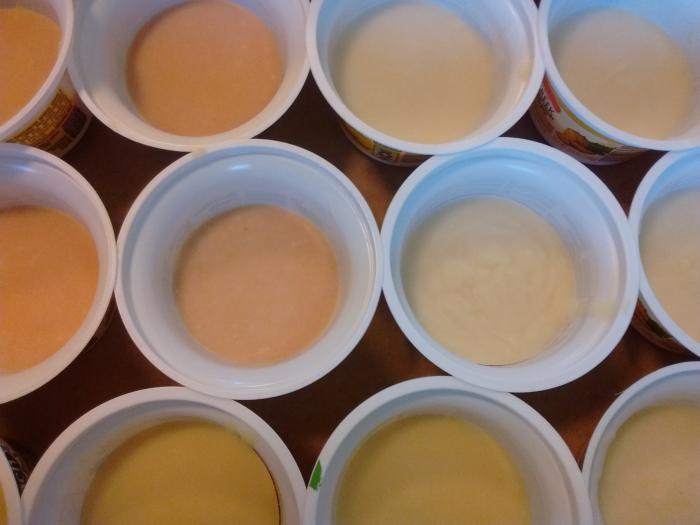 As far as the little lumps, I personally would have used the lye solution like you did. If the lumps were floaty, they are most likely soda ash or saponified milk fat. Either way, that's okay. I do know some soapers prefer to strain the lumps out just to be on the safe side.

I wouldn't worry too much about DOS. It either happens or it doesn't, and I've not heard anything about milk fat being especially prone to DOS.
N