Once again with the soap stamps

Someone advertised a custom soap stamp here, and I remembered them for when I had a little extra to sink into trying to get another one, since the last one was far too shallow

It turned out really well, I'm very happy. The first version they sent was difficult to stamp because only the corners had grips, but they quickly sent another with middle supports for an even spread 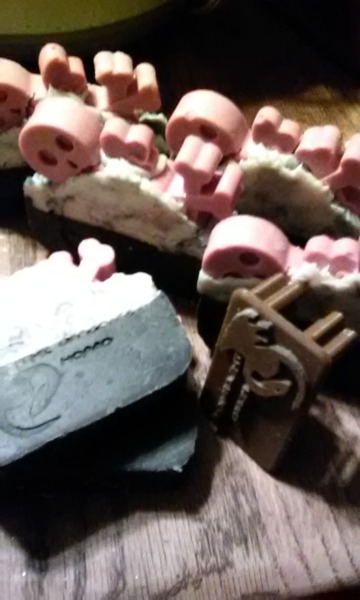 Its hard to read it in the photos but up close the lettering is very clear, I'm going to have to try to get a better shot of that

I also might throw in for another one where I've used a bigger font and spaced it out a little better but that ones on me.

ya'll have seen me make the Pastel Goth bars before, although I was extremely happy with the cp embeds and the way the piping came out this time

the blacks charcoal black oxide and alkanet- the purple veining in the piping is also alkanet, and it has WSP iridescent sparkle mica on it, the only one I indulge in glitter with.

Adorable! I have that mold too, but I've only used it for M&P. How'd it do with releasing CP?

snappyllama said:
Adorable! I have that mold too, but I've only used it for M&P. How'd it do with releasing CP?
Click to expand...

I haven't had any problem with it! Watch out for the orange one though that one bleeds.

They cpop really well, and this batch with the vinegar in it came out super easy and fast (12-24 hours) compared to just the regular odds and ends I pour off into there when I have a little extra batter.

if you don't cpop or vinegar/sodium lactate it'll take a while because of the little teeth, maybe a week? depends on your recipe.

I keep trying to make little bath bombs with them, one day I will manage. One Day

Those are great. Looks like a lot of work.

Maybe! but they're the soaps I enjoy making the most usually my aesthetic is plain swirled soaps but I just have to indulge in piping, embeds, and glitter sometimes

Those are really cute! You're right, it is difficult to see the stamp, I think the multi-colored soap makes it more difficult to see, but what I can see looks like it worked well. If you do try another stamp in the future, I'd highly recommend Lasercutz. They were speedy, and happy to oblige when I requested my stamp come without a handle. I find it easier to get an even impression when you have the entire back of the stamp to press down on instead of just a little handle. If you ever have trouble with the stamp sticking to the soap, and preventing you from getting a clean impression, remember the saran wrap trick. Stretch a piece of saran over the soap and stamp through it. Works like a charm.

Those turned out very cute! I too have a hard time reading it but it looks like it worked pretty well for you.

shunt2011 said:
Those turned out very cute! I too have a hard time reading it but it looks like it worked pretty well for you.
Click to expand...